Daily Turismos come in two very distinctly different flavors for me. The first is a car like a 1972 Mercedes W108 that transforms motoring monotony into a joyful symphony of great mechanical noises, while anticipating the admiring stares of the cars that will be getting passed at 80 mph on our wonderfully, dry, flat California highways. The other, which is a very distant but necessary second choice for most of us, is the more pedestrian Daily Turismo
such as this 35,000 mile, one owner  2003 Mercury Sable LS Premium Wagon, listed on Autotrader.com at a Jaguar dealership in Houston, Texas for $5,981.  A car like this is so cheap and puts such a small dent one’s pocket that it affords the opportunity to acquire a Weekend Turismo like this well kept 1974 Triumph TR6

currently on ebay.  Two very different Turismos, providing something to get to work in during weekdays and something fun to tinker with and enjoy on the weekends.    Read on to see the real merits of today’s plebeian cruiser (a/k/a schlepmobile) blatantly dumped into your favorite auto enthusiast’s blog without apology. 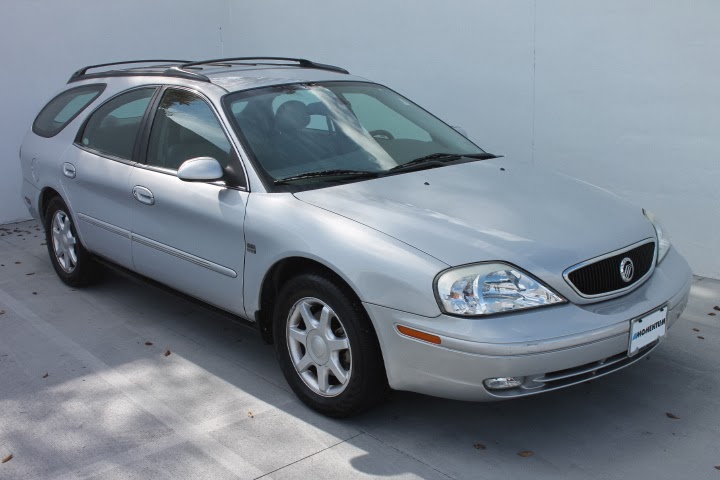 The beauty of this formulaic approach is that the $19,981 combined asking prices of the Sable Wagon Daily Turismo and Weekend Turismo TR6 comes within a couple of dollars less than say a (fill-in-the blank 2013 Scion iQ Base) boring death trap commuter special.

Regular DT readers know that we
don’t casually trot this stuff out to stretch your tolerance, but to stretch your
imagination. The 2000-2005 Tauri/Sables are mechanical twins with the only exterior difference between the wagons being their hoods and front grilles.  I’ve been frequently, loudly (and dare I say unfairly) chided
for having owned 4 of these Tauri/Sables. However, the laughing
stops when we compare the very low total cost of ownership which is due in large part to the absolute absence of any unscheduled repair costs due to mechanical failures that others endure in the name of high style (I can’t believe I even typed that considering that rationalization is skill frequently employed by the underemployed. I write this stuff for free).

Friends frequently ask me for help finding reliable used cars.  I always tell them them that when buying a used car for daily commuter service the goal is to buy the car with the most miles left
in it.  So, I usually start my searches by looking for the oldest, lowest
mileage cars I can find, like today’s 35,000 mile one owner example.  As ubiquitous as the Tauri/Sables once were, these low mileage cars are becoming harder and harder to find.

Besides, in an old utilitarian car like this, there’s not
a big difference in price between the 35K mile car shown above and the 80K mile 2003 Sable LS Premium Wagon shown below, which is currently for sale in Savannah, GA for practically the same price of $5,897, so why
not fish for a low mileage one?  Either car will go to 130-150,000 miles before needing much of anything other than the burden of routine oil changes, brake pads and tires. Another hidden benefit, the lowest insurance premiums you’ve ever paid! 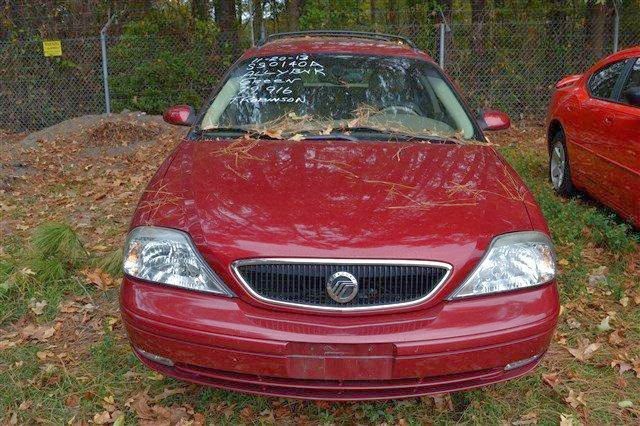 How does one tell the difference between a good Taurus/Sable and a bad one?  Simple, narrow your search to only the top of the line Taurus SEL’s and Sable LS Premiums with less than 80,000 miles.  That first cull, gets you into a well optioned car that usually comes with 4 wheel disc brakes, leather seats, adjustable foot pedals and frequently a trip computer and more often than not a 6-cd changer and less frequently Ford’s strong performing Mach 1 Stereo system. All of those features are found in today’s featured pick.

Then, its just a matter of winnowing those cars down further by only considering cars with the distinctive “24V DOHC” emblem on the front fenders just forward of the doors.  The 3.0 Duratec V6 has a respectable 200 HP and was considered a solid enough performer for it to serve as the base engine in the considerably nicer Jaguar S-Type and the Lincoln LS.  These engines are bullet-proof, not Elvis or Richard Pryor bullet-proof, but so mechanically reliable that one need only change the oil in them for decent service life.  According to the CarFax, this one owner car made annual appearances at the original selling dealership for 3,000 mile interval oil changes, which speaks well of its care. 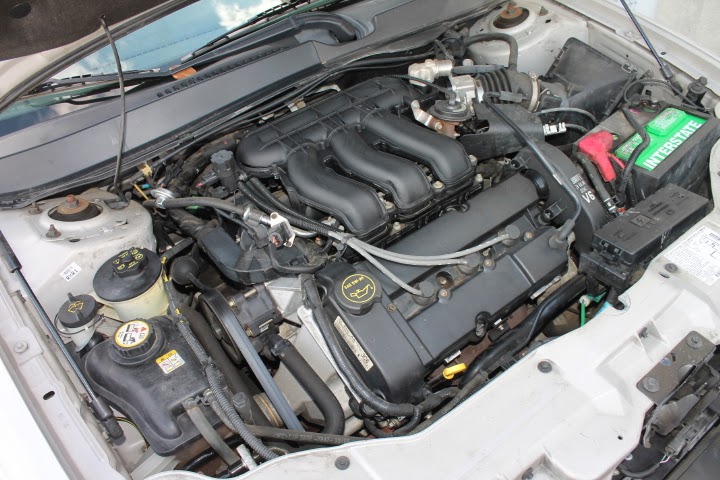 Fuel efficiency is pretty good too.  Again, speaking from personal experience with two cross-country moves between Michigan and California with my wife, our child, our dog, a load of stuff in the back and a car top carrier filled to near explosion, we consistently averaged 26 mpg while cruising at a speed well in excess of the posted speed limit.  Ok, so it might be considered reckless driving in some states to be more than 20 over the limit, but hey.. another built-in feature of the Tauri/Sables is their ability to blend-in to a sea of surrounding traffic.  In short, speed enforcement professionals are not watching out for a Sable/Taurus doing 80 mph. Ergo, when they do see one, the first thing they suspect is a bad reading.  By the time they reset their radar, you’ve seen them and the 4 wheel disc brakes mentioned earlier, slow you right back down to the posted speed!  Besides, they figure you’re just going to cry about how broke you are if they stop you.  A sob story made totally believable because you are driving… you guessed it… a car the cop actually feels sorry for.

There are a additional secrets with
the Taurus/Sable twins; while they carry a very high crash safety
rating, most have side curtain airbags.  Many also have the 3rd row rear-facing seats transforming the car from a 5/6 seater to a 7/8 seater.  Those of you with kids in car seats, its nice knowing that the newer cars have the latch system which is a must have for most owners with little kids.

Today’s featured car does not appear to have the side curtain airbags, which are easily identifiable by the oval embossed stamp in the upper side bolster of the driver’s and passenger’s front seat cushions as shown in the picture below for reference in a 38,000 mile 2002 Mercury LS Premium Wagon offered at a slightly higher $6,300 in Paterson, NJ as listed on Cars.com. The car pictured below also has the rare-as-hen’s teeth rear facing A/C Heater vent mounted in the center console. 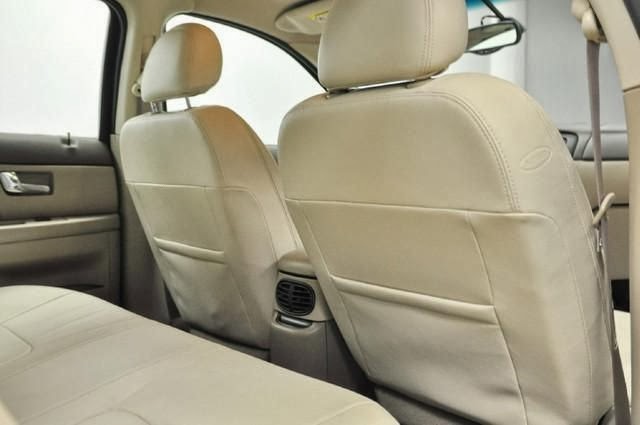 Another great feature is the optional traction control, which is identfied on this same 2002 model car by the switch right in front of the tach.  Editor’s Note: Traction control is for girls. 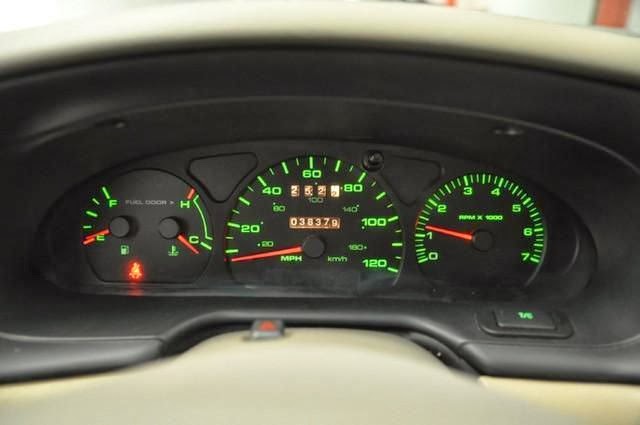 I can personally vouch for the traction control and limited slip differential, which is a nice feature in hard packed snow and ice, when you need to get your girls home.  That, or just a decent set of tires and a less than absurd amount of foot feed.

Having owned both the Taurus and Sable versions of these wagons, I can tell you that the Sable is just slightly upmarket of the Taurus when it comes to minor accessory differences (like power passenger’s seat on the bucket seat models) but, the Tauri generally command a slightly higher (by a couple hundred dollars) sticker as used cars because they are better known to the public.  The Sable isn’t exactly the “Cadillac of Minivans” like the Olds Silhouette was, but hey, in the world of schlepmobiles every little distinction helps.

DT’s Editor-in-Chief Vince knows my wife (Ed’s Note: She seems like a perfectly normal person, her choice of spouse not withstanding).  Nothing and I mean nothing demonstrates her tolerance and her clear head for numbers better than her willingness to frequently drive these pieces of crud for the past 11 years.  We are currently shopping for a new wagon and have been eying the 2010 Passat Wagon Komfort, which is considerably smaller and much better looking than the Tauri/Sables.  After all, the  Passat has modern features like blue-tooth navigation, but hey… who needs nav anymore when its on your phone?  Besides, most 2010 Passat Wagons are 3x the cost of these Mercury Wagons, or the same price as the Daily/Weekend Turismo combo-pak.  Most of the 2010 VW’s have just as many miles or more miles on them than the Sable examples above. Furthermore, the VW’s will need a timing belt during our term of ownership.  At 3x the cost and probably 4x the depreciation after 4 more years on the road, its hard to buck the economics.  Keep in mind this is a strategic choice to maximize purchasing power, not a cold fiscal policy suggesting that everyone should drive one of these because it makes good financial sense.  Quite the contrary, its too hard to think financial sense when you’re walking towards one of these in a crowded parking lot, knowing that you’re going to be the one driving it home.  So, the only way you can hold your head up is by having something fun waiting for you when you get home! 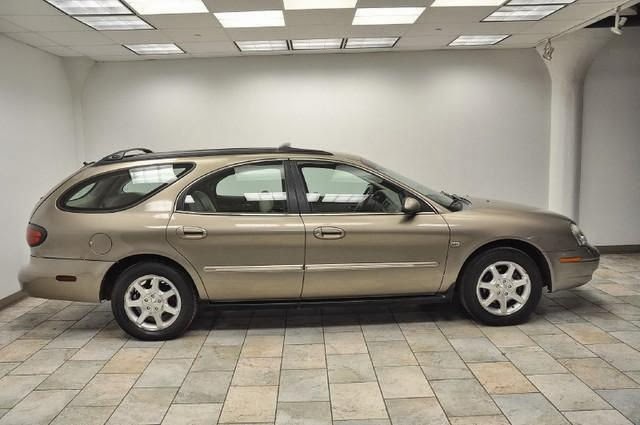 As I started writing this piece we started looking closely at this 34,000 mile car in Houston.  I am now begging one of our loyal readers to pick this car up before we do.  Our friends would expect it.  Some might even appreciate it because they’ve seen some of our friends kids driving our old discards which we essentially donate to them because we feel bad that we paid so little for them.

We paid $7,300 sight unseen on ebay, for our current ’03 Sable Wagon which had 30,000 miles on it in ’06.  We are still driving it knowing that we could sell it tomorrow for $4k with its current 95,000 miles and pick up this next one for less than $2,000 difference!  The underlying reality is that our frugality has caused us to put about 350,000 miles on these things and the prospect of doing another 100,000 is just more than we can probably deal with.

In closing, whoever bought the 1980 MB Wagon.. we featured in October which sold for $5,200, I HATE YOU!  You ruined my plan of escape from the Tauri/Sable syndrome!

See a better schelpmobile with room for seven or eight for less than the 1/3 the cost of a 4 yr. old VW wagon, or another $5,200 V8 Merc Wagon (the German kind)  email us here: tips@dailyturismo.com