In a dream last night, as I was wandering through the enchanted forest known as CraigsHollow, I stumbled upon a Saab V4 powered unicorn. The Saab mesmerized me with its freewheeling clutch to the point that I had entered a trance, when suddenly within me I was beset with the perplexing sensation of déjà vu.  What was it?  Have I seen this car before?  Rumblings from below gave me another reason to pause.  Did I have Mexican food for dinner last night, or was that a dream too? I attempted to get closer to the green Saab when it started to morph into an avocado and my shoes turned into size 11 jalapenos…and why on earth was Jennifer Aniston…buzz-buzz-buzz.  The staccato of my alarm clock interrupted pleasant slumber like the frantic percussion of a digital woodpecker.  Unfazed, but bleary eyed, I fired up the interweb via my trusty bedside Commodore 64 iPad and surfed to craigslist where I found this 1971 Saab 96 V4 offered in Ventura, CA for $7,500 via craigslist. 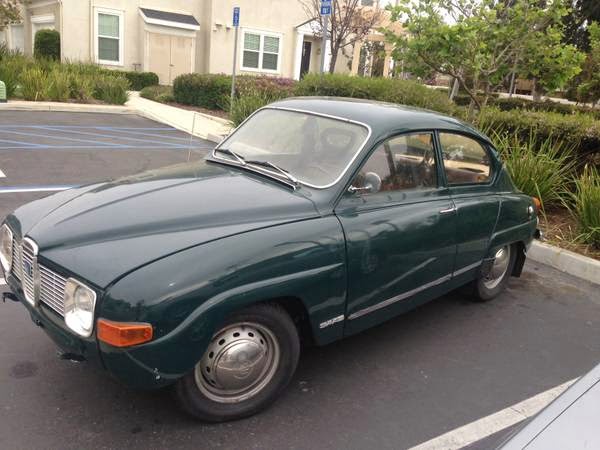 Visions of green paint echoed in my pre-coffee cranium like the sound of distant cannon fire.  I know I’ve seen this TGG (Trolhättan Goblin Green) paint scheme before.  Maybe there was a clue on that the missing bumper, if only I could find the bumper I would remember… 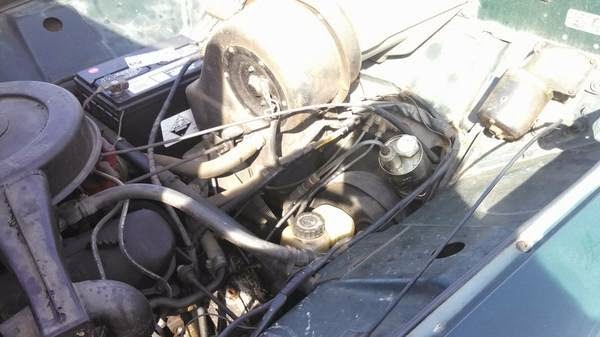 The seller’s mid morning shadow brings some needed contrast to the over exposed mess under the hood.  His finger is caught in the act of engaging the shutter on a small camera –NO, not a camera! The telltale light around his thumb indicates that this is a smart phone, probably an iphone, everybody in LA owns at least one iPhone.  The seller is taking these pictures quickly…no need to break out the DSLR and post process them to oblivion, just snap and go…a quick job…I know I’ve seen this car before…  I donned my robe and headed to the kitchen for a much needed injection of caffeine. 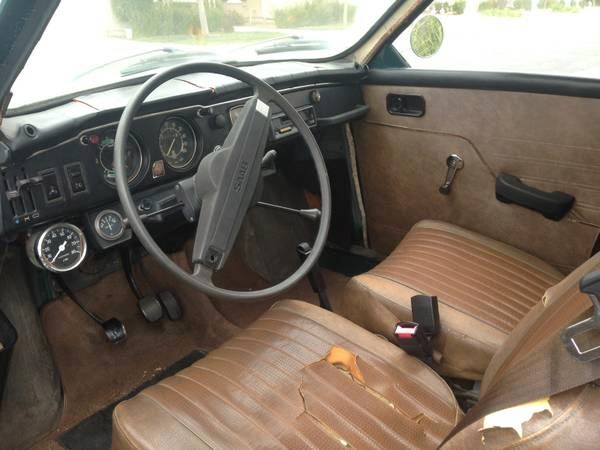 The mechanical whir of the conical burr grinder spooked the mangy cat from her fridge-top resting place and her paws skittered across the Venetian tile.  New memories awoke as a the percolating stream of black gold filled the carafe.  The seats…I’ve seen them before…drip-drip-drip..and then BAM…like a grenade…grenade…yes…those seats…steeped in history and covered with a fine patina of — I’ve got it! 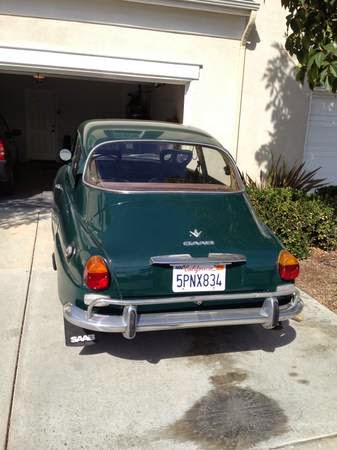 The internet is like a gossip circle made up of a bunch of assholes with eidetic memory.  There are no secrets.  Edward Snowden long ago told your kids there is no Santa Claus and the Easter Bunny is just a skinny man in a hairy bunny suit. 5PNX834, I’ve seen you before….and you don’t need to water-board anybody to figure them out, you just need a copy of Netscape’s latest Navigator, an AOL online disc and a warm cup of Joe.  The fact is, you can’t just buy a $5000 Saab 96 and flip it two months later for $7,500 without somebody on the Daily Turismo figuring it out, because, let’s face it, we’ve are just sitting here in our robes with nothing on underneath and nothing better to do.