It never fails to happen.  Write one snarky quip comparing the aesthetics of the Studebaker GT Hawk to Joan Rivers’ face and the guys over at the Studebaker Drivers Club start acting like I just canceled Matlock or enacted a tariff on the importation of Metamucil.  It’s not like I compared the car to leprosy, syphilis, small pox, or being bitten by an electric eel.  Furthermore, it was clear that the particular GT Hawk is a cool car offered at a good price and Joan Rivers doesn’t look bad for being a thousand years old.  In fairness to the Studebaker crowd it was decided to introduce this next posting filled with nothing but positive things to say.  Find this 1953 Studebaker Champion Starlight Coupe offered for $6,000 in Pompano, FL via craigslist.  Tip from JB. 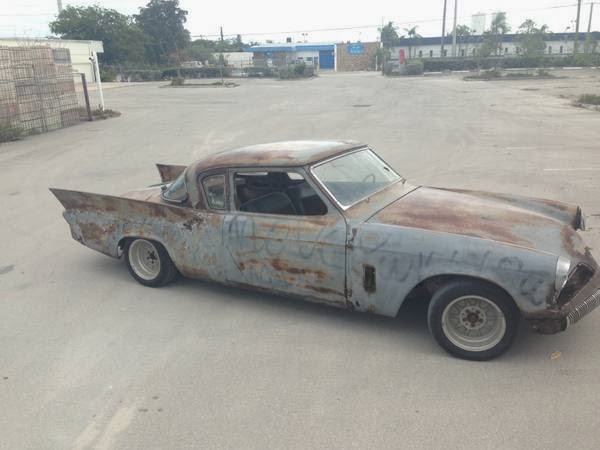 This originally started life as a Studebaker Champion Starlight coupe but now is rusty nicely patina’d and was attacked customized by a lunatic an upstanding Studebaker owner and craftsman who added Batmobile 1957 GT Hawk inspired tail fins and parts of a hideous 1949 Mercury grill.  The Starlight coupe would have been equipped from the factory with a flathead inline-6, but it is now powered by an unknown V8.  The seller describes it as a salt flat special and while it is clear the salt has caused some corrosion, the tires aren’t flat at all.

The Starlight coupe is often confused with the Starliner hardtop – but the Starlight (blue car on the right) has a B-pillar between driver’s window and rear window, whereas the Starliner (red car on the right) is pillarless.  This was a big deal back in the 1950s/1960s and I can’t imagine why just about every auto manufacturer built the dual versions of their mid & full-sized sedans, but pillarless hardtops today are typically worth more than the coupe with all other things being equal. 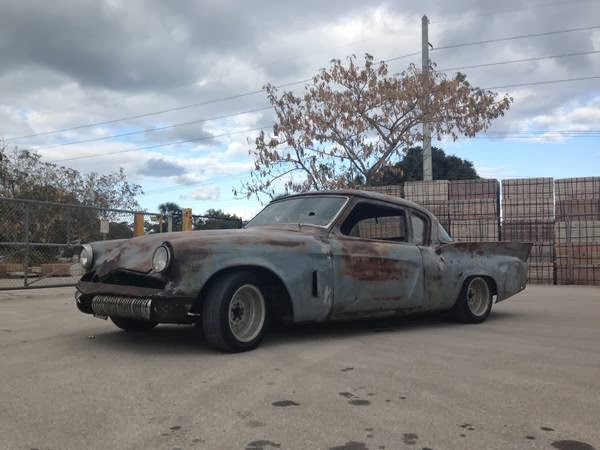 Lastly, I’d like to address the rumors that I drive a Smart car as totally and 100% untrue.  No car choice I have ever made could be ever described as smart by any reasonable person.  However, I have to admit that I once was bitten in the a$$ by a Cougar.  That is all.  tips@dailyturismo.com