There’s no hiding the fact that we keep our eyes out for sporty-type haulers at DT and this 2000 Volvo V70R AWD Wagon has popped up on both Ebay and Craigslist.  The Ebay bids are currently at $2,000 and the Craigslist asking price is $4,900.

But I doubt this story is going where you think it is…we usually present cars at $5K $10K or $15K that deserve a closer, more detailed inspection by our readers, however, I’m going to buck that trend and suggest that we consider the creation of a new category called Avoid At Any Price!

This V70R is a decent looking car and the auction proudly proclaims the car will be available to the highest bidder because there is NO RESERVE.  So, why should you run?  Always vigilant on Ebay, I first look at the seller’s feedback which in this case shows an impressive 815 Trades with 100% positive feedback..this is looking better, right?  Nope, ’cause truth be told Ebay is the land of Caveat Emptor.

If you are only interested in the Volvo above, consider this a wave-off and stop reading.  If you are intrigued by the buying/selling process on Ebay, I invite you to dig deeper with me… Hopefully some of the things I look at will help some of our readers as they investigate cars on Ebay.

Now, take a look at this Ebay auction for a 2004 Volvo V70R Wagon..… they are not the same car, but both ads
have the same look and the same phone number, but the seller of the 2004 is
sdsenterpirsesinc in Burlington, NJ. which is a very short commute over to Philadelphia. 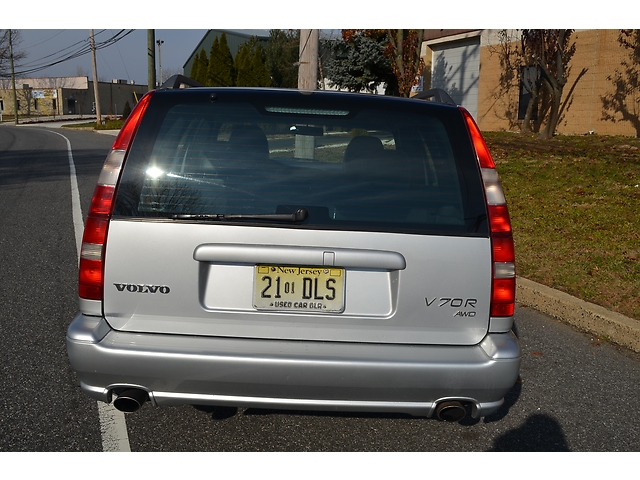 This is the 2000 Volvo Wagon’s license plate.

But when you scroll down to the picture ofhe rear of the 2004 Volvo Wagon. 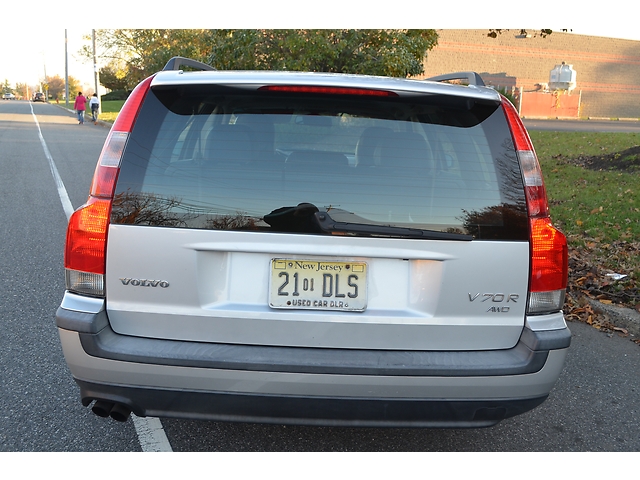 One dealer with 2 silver Volvo Wagons both V70Rs, posted and expiring, within 1/2 hr of each other.

Why am I taking this so far?  Because trading online for a car is cool way to gain access to a much larger market area for buyers and sellers alike, but I get totally bummed any time anyone’s deal goes sour.  Just like all sales, Ebay auctions are only as good as the person at the other end of the transaction.  I’ve bought my last 6 cars online without seeing any of them in person until they were driven home or arrived on a transport.  There were no problems and I’m looking forward to doing it again soon, but I have to winnow through a lot of crud to find the right one.

I also have a couple of friends who are decent car dealers who get painted with the same brush of distrust because of stories of bad trades with less than honorable dealers.  Its kinda like having someone pee in the pool.

Looking through all of his feedback we find one buyer (shreded 73) suggested that the feedback is faked, which is a pretty big red flag. However, in fairness that was apparently that complaining buyer’s only Ebay transaction. So, lets take a closer look at the Seller garyv_autosales 100% positive 815 Feedbacks.  How can he have a 100% satisfied feedback rating when there is a complaint.  Because his feedback % of satisfied only reflects the last year. In this seller’s case, he only has 2 trades within the past year and those were within the past month.  As they were both positive, they have reset his Feedback satisfaction score to 100%.  Prior to his two very recent sales…he hasn’t sold anything since 2008! The first of those prior feedbacks (on 10/10/08) is glowing, which was a good thing for him because just one day earlier he received a negative feedback on an Alfa.  Going further back there appears to be a couple of folks who are less than thrilled with him.

The other red flag is..this is a PRIVATE auction. Private Auctions, with no reserve, are my least favorite type of Ebay sale because they invite the opportunity for deception that Ebay was designed to avoid.  Even if they’re an honest dealer, if their last automobile sale is over 90-days old you cannot use the “view item” feature to see what type of cars they have been selling anyway.  However, even though you may not be able to see this seller’s old auctions, you can see his current “See Other Items”; and we’ll come back to those in just a bit.

For now, lets go back to the two guys who gave him positive feedback within the past 30-days after his four year vacation from Ebay.

The first purchaser left feedback which says “The Jeep is in Great Shape Nice Transaction A+:”  which at  first blush sounds promising, but it was a private auction.  So, even though it was conducted within the past month, you still can’t see what that Jeep looked like. No Help Here.

Digging deeper into that buyer’s most recent of his 23 Feedbacks, we find that he’s purchased two cd’s, (but lucky for us) he’s recently  sold something which indicates that he’s located in Chalfont, PA which is a is 24 miles north of the seller’s location which is listed as NE Philadelphia in his Craigslist ad.

So, from that feedback information, we’re told that someone local in Philadelphia bought a Jeep from a local Ebay seller rather than concluding the sale as a “local sale”.  (If he took the time to drive to inspect the car, wouldn’t he have just purchased it outright on the spot, rather than messing with Ebay?) Then, when you look at his feedback as a buyer…it isn’t  listed among his feedback!  Hmmm.

His second satisfied buyer, who lauds him with “Best deal, love our car Gary was AMAZING & great communication A++” but again…his purchase of his car was ‘Private’ so you don’t get any information here either.  However, this ebayer has been a lot more active as a buyer which helps. Here’s a list of his recent purchases (his purchase from this seller is shown on 11/12/12) but purchases don’t indicate where the buyer is located. Among his recent purchases are car parts like a winch adapter for a Jeep, a dash kit for an Excursion and a Turbo for a Ford Diesel.  Hmmm.  the seller of this Volvo is currently offering a couple of Jeeps, a Ford Excursion and a Turbo charged Ford Diesel Cutaway bus.

Looking at the feedback for the seller of the ’04, I noticed that one of his feedbacks also has “Nice Vehicle Gary was Good to Deal with Thanks”. So we’re definitely dealing with Gary and all his customers under the new user ID seem very happy.  These reports look promising.

But, I’m just getting warmed up…with the help of a friend’s access to some auction reports, I went digging into a couple of the this seller’s “Other Items For Sale”. 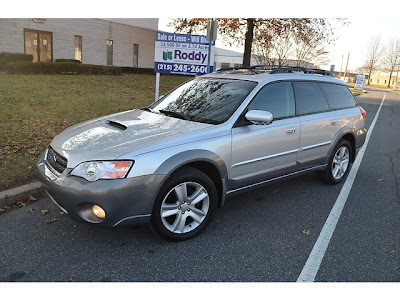 While Below Average is a subjective description and this may not be the same car, auctions use the term carefully so that their reports are more credible (and useful) to the dealers who rely upon them when bidding their trade-ins. The current bidding on this Subie is $8,700…, but the seller is looking for much more.  Here’s his matching Craigslist ad in which is a little more proud of the car offering it at $13,500.  But..instead of paying $13,500 through Craigslist, you can win this car in his Private, No Reserve Auction!

2)  There is also this Black 2000 Jeep Cherokee Limited with 173,498 miles on it, which seems like a pretty close match to a Black Jeep with the same first 10 digits of the VIN which sold in Philadelphia at auction showing 173,471 miles in Average Condition, purchased for $2,300.  With  bids tickling it at $3,050 the auction price has been cleared, but its stay a ways from their Craigslist ad price of $4,500.

If the bidding stalls, will this sale conclude or will just fade away??  No Telling. 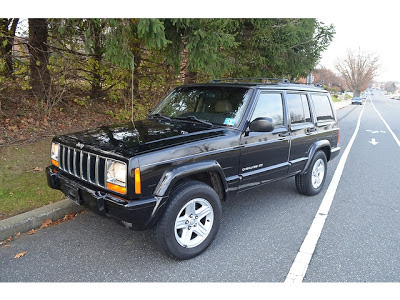 All of the items listed above are not shown to pick on this seller, or to presume,suggest or imply that he is anything less than honest. After all, buying at wholesale from an auction and selling at retail through any legitimate channel is how auto dealers earn a living.  However, auto dealers usually have a brick and mortar facility which they are quite proud of and they market their cars in every electronic venue they can find.  The cars offered by this dealer are pictured on city streets from some guy with a mobile phone.  His Craigslist ads are pretty easy to find, and we know he’s in NE Philadelphia, but does he have location that you could go visit to check these cars out?  How about settling any difference of opinion if the car arrives in less than the condition you expected?

Sorry for dragging you through my meandering trip through Ebay, but this is offered as a means of demonstrating that its pretty easy to find out a lot of  information on Ebay….if one just looks for it.

I haven’t a clue if this is useful to any of our DT Readers or if its an unwelcome distraction.  However, I think it could be useful, interesting and even frequently amusing if our DT readers could send us ads that are particularly flawed.

This seller and this Volvo may both be as solid as a rock, but for me, sitting thousands of miles away with only a couple of pictures and these online ads to consider…I’m heading for the exit.

That local 1992 Volvo 740 Wagon with the LSI featured recently on DT is looking better every day! 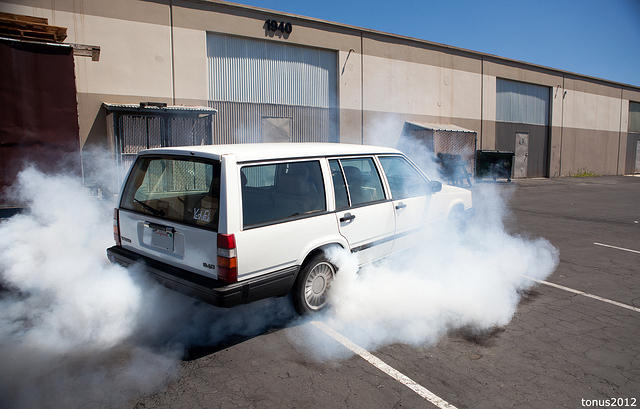 Your comments are welcome, because there are lots of other areas of Ebay that I can write about, but more importantly I need a wave off if this is too far off topic.

I can live with “Keep it Simple, Post the Link and Shut-up!!”