The Nissan Z car was originally a simple sports car with a small naturally aspirated inline 6 and lithe handling.  As previously noted by the daily turismo the Z pulled a bit of an ‘Elvis’ and the 300ZX marked the peak of the double chin and sequined cape.  This 1994 300ZX is located in Peekskill, NY and offered for $5500 or best offer via ebay was originally a base 300ZX non-turbo, but has recieved a “JDM” turbo-engine swap. 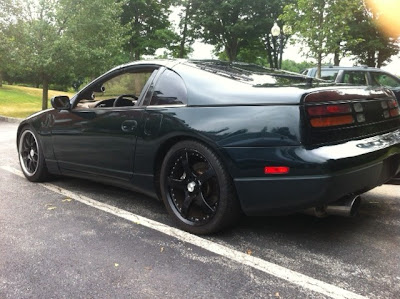 The Z32 generation 300Z was released in 1990 – a pork based de-evolution of the 1970 Datsun 240Z – and it wouldn’t have originally come with mis-matched wheels.. typically people mismatch wheels to avoid rubbing issues – but this car rubs slightly in the rear – which makes us want to rub our heads in confusion?  Overall the Z is a handsome car – still looks like a supercar today and it was fast back in 1990 – landing on auto-industry-owned-fluff-magazines ’10 best’ lists on a regular basis. 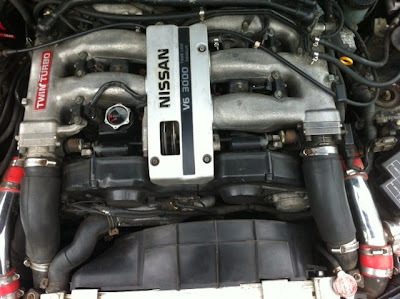 Yo dawg – this car is rockin a “JDM TWIN TURBO SWAP WITH ROUGHLY 50K FROM WHAT IM TOLD”…ok first, step away from the caps lock key and stop shouting.  Second, do you even know what the acronym JDM means?  JDM = Japanese Domestic Market and means the car/engine was originally sold in Japan, instead of US or Europe…for the 300ZX this means…well nothing since the engines were identical worldwide.  And when you put the words “JDM turbo swap” in the description, its best to avoid the disclaimer “FROM WHAT IM TOLD” and “CAR DOES NOT HAVE ANY RECIEPTS FOR ANY WORK DONE”.  Fortunately the 300ZX twin turbo VG30DETT 3.0 liter V6 makes 300 horsepower and 283 ft-lbs of torque regardless of original market (ignore the JAMA mandated 280 hp rating) and is mated to a 5 speed manual known for sounding like a blender before grinding its insides into pulp.  This car has some upgraded parts like turbos, downpipes, blow off valve (psssshhhttt!) and garden hose sized injectors…so it probably makes less power than stock- good news for the tinkertoy tranny. 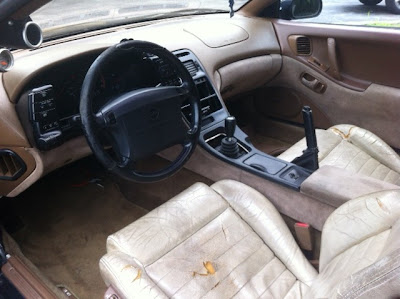 Inside the Z has a driver centric cockpit and sits supercar low with removable T-tops for taller drivers to fit.  The seats on this particular car look like it was owned by Edward Scissorshands and the highly visible A-pillar gauge pod lets everyone around you know that you are a 12 year old.  Luckily this car wasn’t originally a turbo model so it doesn’t have the prone-to-failure-and-expensive-to-repair Super HICAS (Hyper InConsistent Ass Steering) system – and should be a fun car to toss around the turns (after you’ve solved the previously mentioned rubbing issues). 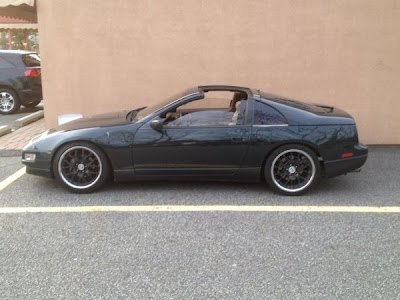 Wait a minute — for some strange reason the wheels match in this photo…undoubtedly this was a photo from the previous sale of the car – now here to mask the damage and neglect from Mr CAPSLOCK.  Bottom line:  $5k is pretty cheap for a 90s Japanese supercar that goes 0-60mph in 5 seconds and this car would make a good daily turismo after some needed cosmetic restoration.

SEE ANOTHER AD IN ALL CAPS? DON’T EMAIL US HERE:  tips@dailyturismo.com