Don’t want to wait for Ford to put a turbocharged 4 cylinder into a ‘sporty’ 2+2 coupe with manual trans and rear wheel drive?  Buy an 80s classic — Merkur XR4Ti, like this 1989 model located north of Los Angeles, CA (found via craigslist). 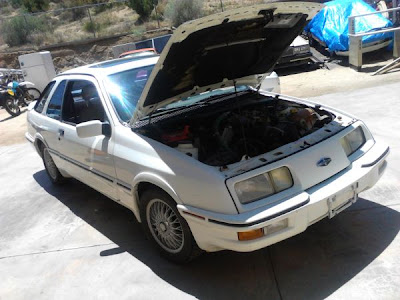 The Merkur XR4Ti is actually a re-badged Ford Sierra ‘hand-built’ in Germany for the European market and then Ford VP Bob “Maximum” Lutz convinced the ‘brass’ at Ford to import the cars to North America from 1985-1989 making it a short lived experiment.  The name is a mouthful but breaks down as follows:  XR – prefix for experiment and racing cars sold by Ford, 4 -cylinders, T -turbocharged and i – fuel injected. 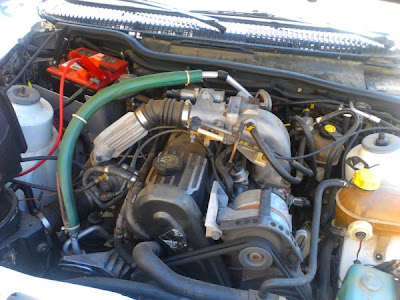 The heart of the XR4Ti is a 2.3 liter single overhead cam turbocharged (non-intercooled – but you can see the turbo compressor outlet pipe has some cast ‘cooling’ fins on it!) inline-4 that produces 155 horsepower and 205 ft-lbs of torque.  This engine can trace its roots back to the Ford Pinto – but would probably not bring up that info at a party.  This car is equipped with the desired 5-speed manual transmission and has recently had its AC unit replaced. 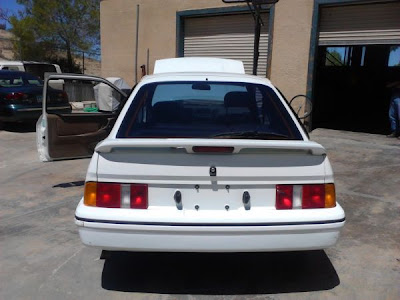 The early XR4Tis had a funky looking bi-plane wing – but by 1989 the rear wing was much more sedate.  This particular car also looks cosmetically to be in great shape – aside from some yellowing in the headlights – and it is probably impossible to get new ones. 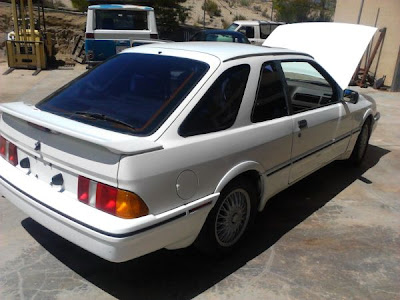 Original wheels finish what looks to be an unmolested stock example of a somewhat rare, somewhat sporty 2+2.  Looks like a decent car to drive around while your SVO is getting a tune up.