If Colin Chapman were alive today he would not be caught dead in an Isuzu, but more likely if he were literally alive he would be clawing at the inside of his coffin and screaming for help (but I digress…).  When other companies were stretching ‘badge engineering’ to the limit, Lotus was stretching brand whoring to the limit aka ‘The Lotus Position’.  This 1989 Isuzu I Mark RS Lotus Edition  is for sale in Hutto, TX for $1200 (via craigslist). 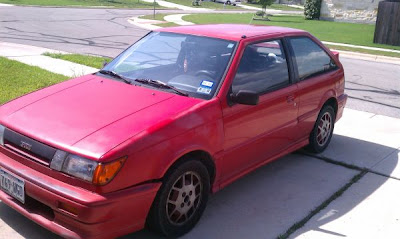 The Isuzu I Mark (I Mark, you Jane!) is part of the GM 80s compact car family referred to as “Gemini”.  The styling was started by noted Italian designer Giorgetto Giugiario noted for such designs as the DeTomaso Mangusta, Iso Griffo,  ‘the’ Delorean, Ferrari 250GT and Nikon F3.  Unfortunately for Isuzu, Giugiario was clearly inebriated when he designed the I Mark and when GM made some additional design changes for cost and ‘GMness’, Giugiario ended his relationship with Isuzu and disavowed his firm’s work on the car. 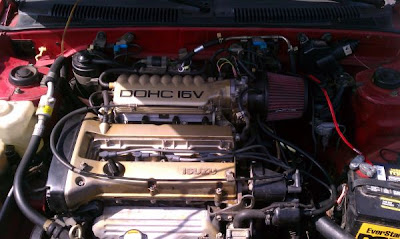 The I Mark is powered by a free-revving 1.6 liter DOHC inline 4 – putting out 125 horsepower and 102 ft-lbs of torque.  The power is put to the front wheels via a 5 speed manual transmission.  With only 2157 lbs to push around the 7800 rpm 4-banger will make the car fun to toss around on top of the “designed by Lotus” suspension. 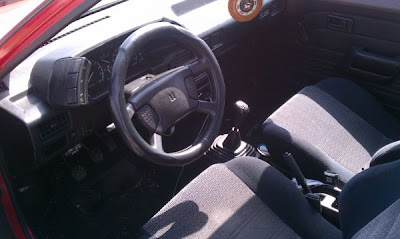 During the era when Lotus street cars left much to be desired (before it released the highly successful “Elise” model and was later rescued from financial disaster by a Malaysian car company) Lotus Engineering spent much of its time working on other OEM’s suspension and putting the Lotus badge on horrible economy cars.  This car fits into the “horrible” economy car segment, and would probably fun to drive for a few weeks before the cheap plastics and skateboard like ride drive you mad. 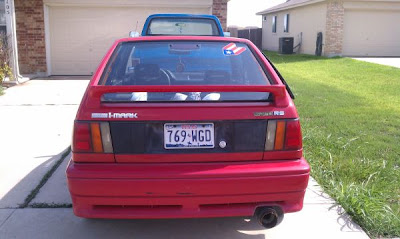 A Texas flag based ‘shoshinsha mark’ sticker on the rear window reveals a lot about the current owner (he must have removed the “illest” stickers before taking the photos), so don’t believe the stories about this being his mom’s car.

Does the I-Mark hit the mark or belong in an I-zoo-zoo?

Sorry about the front wheel drive car on dailyturismo, and I promise it will happen again.  dailyturismo@gmail.com