The Dodge Conquest/Mitsubishi Starion/Plymouth Conquest/Chrysler Conquest was a line of 4 cars built in the 80s by Mitsubishi in Japan – rebadged for Dodge/Plymouth/Chrysler to confuse simpletons.  It was the Japanese version of a pony car and the stallion could run! Turbocharged front engine, manual trans, rear wheel drive and limited slip differentials made the car compared to Mustangs, Camaros, Porsche 944 & RX7s.  This 1986 Dodge Conquest  has received the full stallion package with a heart transplant from a Ford Mustang and is offered for sale in Fort Payne, AL for $7k. 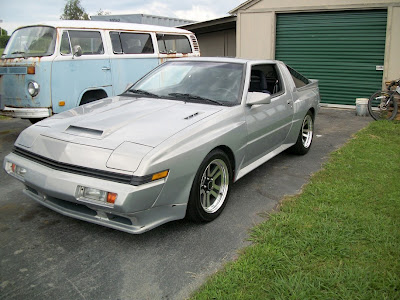 This “Stallion” is the widebody version (Starions worldwide were offered with or without the massive fender flares – we at DT believe the flares are awesome).  It sports a (“rare” according to seller) 1983 hood with scoop and some wide 8″ front and 9″ rear rims.  It is parked next to a rusty VW van – which some some unfathomable reason are super valuable these days and is probably worth twice as much as the thoroughbred. 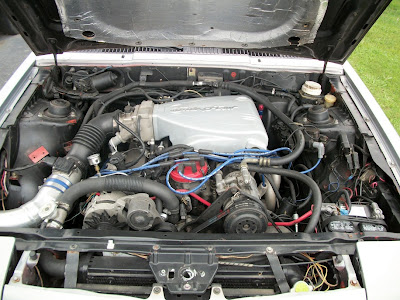 Originally this Conquestion would have come with a 2.6 liter 4 cylinder turbocharged engine putting out about 137 ponypower – but its had a complete engine/transmission transplant from a 93 Mustang (its actually a crate-engine).  This chariot is now pulled by a 5 liter pushrod V8 with electronic fuel injection, an aftermarket cam, intake & headers – probably good for something in the 300 horsepower and 300 ft-lbs of torque range.  The transmission is the venerated Borg Warner (aka Tremec) T-5 -no frills 5 speed manual transmission used in a cornucopia of breeds from Ford to TVR. Like a dirigible from a 99 cents only store, they are well known for being light, cheap and blowing up. 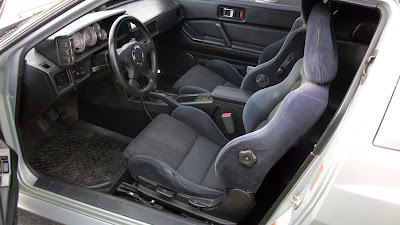 The original interior is typical Japanese ‘faux-tech’ looking 80s plastic, but has been augmented with Autometer guages, a quick release steering wheel, aftermarket seats (although the seller says he will replace these with original leather Mitsudge leather seats) and 700cc of Lasix.  Surprisingly all of the gauges work and it has functioning AC. 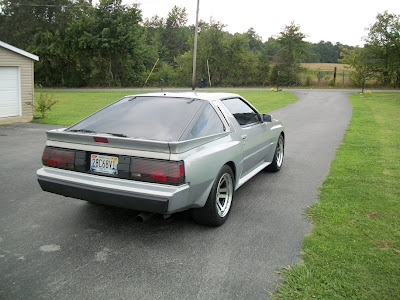 One plus a Starquest has versus ‘Merican pony car is handling prowess – created by an independent rear suspension, decent sized front and rear sway bars and a relatively light curb weight of 3000 lbs.  Unfortunately – the realities associated with creating a Frankenstein car often outweigh the benefits and you might be better off served with a low mile clean Starion from a ‘little old lady.’  But a stock Starion will be crushed in the 1/4mile by more than a furlong from any modern rental car…so perhaps this black hoofed ringer is the right bet to play down in class and beat some Mustangs.

The question is – does this Stallion belong in your stable or the glue factory?