Last week we ran a feature on a clean (but slushbox equipped) 2004 Mustang Mach 1 with 42k miles. This week we thought we’d look at the other end of the Fox body Mustang spectrum in terms of age and price to get a sense of the current market. Just to illustrate the disparity – that ’04 Mach 1 had done an average of 5,250 miles per year and was being sold for $18,800. Our new featured Fox was based on the same basic architecture and formula, has only covered an average of 2,865 miles per year for the past 20 years, and is 80% cheaper to boot. Check out this 1983 Ford Mustang GT hatchback for sale, complete with 5.0L V8 and T5 5-speed manual trans, listed on ebay in Santa Ana, CA for $3600, and tell us it isn’t a Daily Turismo performance bargain! 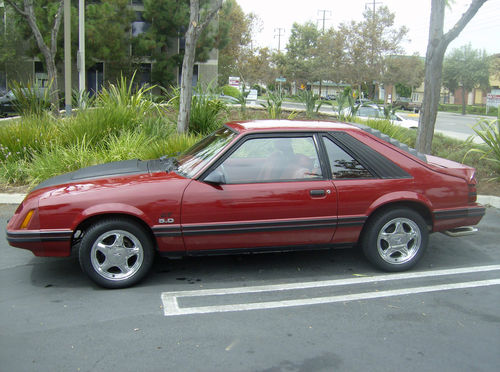 This is the early Fox – when she still looked perky and young, before she put on a few hundred pounds, got a facelift and cut her hair short in a butchy ‘do. There were numerous upgrades from the previous year though, including 18 (!) more horsepower…that’s ten plus eight frickin’ more ponies! That number does not sound like much to brag about but consider that the total peak power output went up to 175 hp @ 4200 rpm, and it puts the gain into perspective (today’s base model Mustang V6 makes over 300 hp for reference). 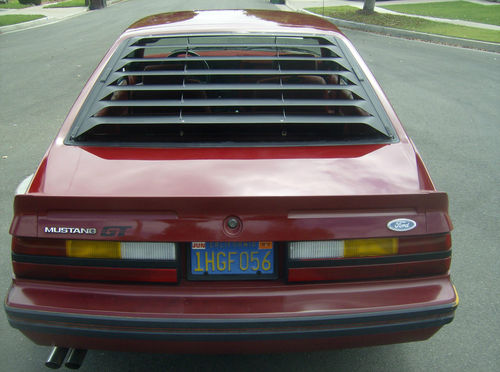 This ’83 pony wears a shade of maroonish red / burgundy both inside and out, that seems to be the color scheme for something like half of the 1980s Fox Mustangs that we still see on the street today. The car is incessantly monochromatic in a way that only Ford could pull off. Sure, there are a few black accents like the hood stripe, sweet rear window louver shade, steering wheel, door handles, etc…but red paint, red seats, red dashboard…even red seatbelts and carpet; this thing should be called the Scarlet Stallion Edition in our opinion. Ford even made Explorers with this same color scheme – and it looks hideously dated now – but if that plush ’80s velour gives you an irreplaceable fuzzy nostalgic feeling, a Mustang GT like this one would probably be the best vehicle to rock it with. 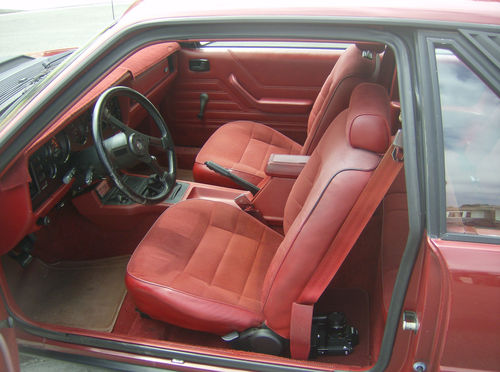 The 5.0L / 302 c.i. pushrod Windsor V8 was still wearing a carburetor and a giant sombrero-like air filter in ’83, but at least the boys in Dearborn had upgraded to a Holley 4-barrel for less flow restriction vs. the previous 2-barrel unit. Still, a 5.0L engine making 175 hp is horribly choked by modern standards, and in fact the current 5.0L Coyote engine in the standard GT makes 420 hp, almost 2.5 times more power from the same displacement 29 years later. We have to take it in context though; the Mustang GT 5.0 was only down 15hp from its biggest competition in ’83, the Camaro Z28. See this vintage Car and Driver article for some comparo entertainment! 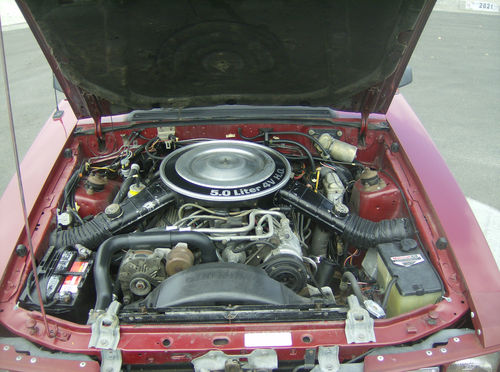 1983 was a good year, and we think $3600 is a fair sum to be able to relive the days when Bon Jovi and Poison had just formed and had not yet begun to rock…and Duran Duran’s “Hungry Like The Wolf” was blaring from every Mustang’s AM/FM/Cassette stereo. In contrast to buying last week’s ’04 Mach 1 for nearly 20 grand, plunking down the cash for this Malaise-era carbureted GT would leave you with plenty left over for groceries – so you wouldn’t be nearly as hungry as a feathered hair, blazer-and-scarf-wearing New Wave rocker was for his next coke fix off of a Wild Turkey logo’d mirror.

With only 83,100 documented miles from new, unmodified condition and a spankin’ fresh interior, this ‘stang qualifies as DT “Minty Fresh,” even though it looks like it needs a bit of cosmetic attention on the front plastic fascia panel that holds those four-eye headlights. It doesn’t have the T-top option, but we’d take increased unit body stiffness over topless douchebaggery any day. The blue and yellow “1Hxxxx” sequence CA plates are correct for an ’83 meaning it’s quite likely this has been in no-rust land since new and is not about to break in half. The moderate torque from the carbureted “High Output” 5.0 certainly won’t stress the chassis much either!

Find a redder ’80s interior for sale (in a car or not)? Email us here: tips@dailyturismo.com