For today’s first Thorsday installment we travel all the way to the mother country – Sverige, a.k.a. Sweden to us English-speaking foreigners – to check out one sick puppy. Literally, this Volvo 4×4 military transporter was nicknamed the Valp which translates to puppy, and with this example’s custom panel-painted tri-tone color scheme it looks totally sick, bro (dude). If you can read Svensk (Swedish) or have Google Translate installed in your browser, head on over to blocket.se and check out this 1981 Volvo C202 4×4 being offered for 50,000 kronor, about $7470 using today’s exchange rate, in Gällivare, Norrbotten, Sweden. 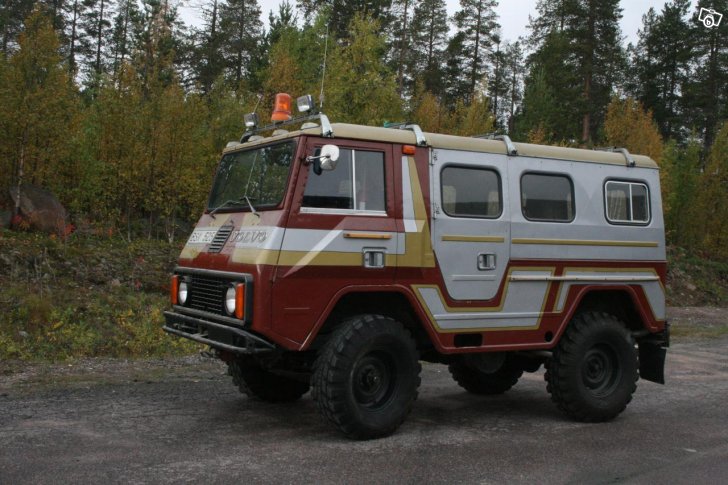 The C202 Valp was the smaller 4-cylinder predecessor to the slightly more well-known C303 and is based on the same awesome formula: short wheelbase, large tires, portal axles, mid engine, cabover, 4×4 van. The only other vehicles we know of that come close are the aircooled (boo) Austrian Pinzgauer and the über Deutsch Mercedes-Benz Unimog. The ‘mogs command a huge price premium in the US based on their zombie-proof unstoppable reputation, but the similar Volvo C202 & C303 models are the better value in our opinion – if you are looking for a mid engined cabover 4×4 van, that is! Incidentally, these can be found in the US with a bit of effort. 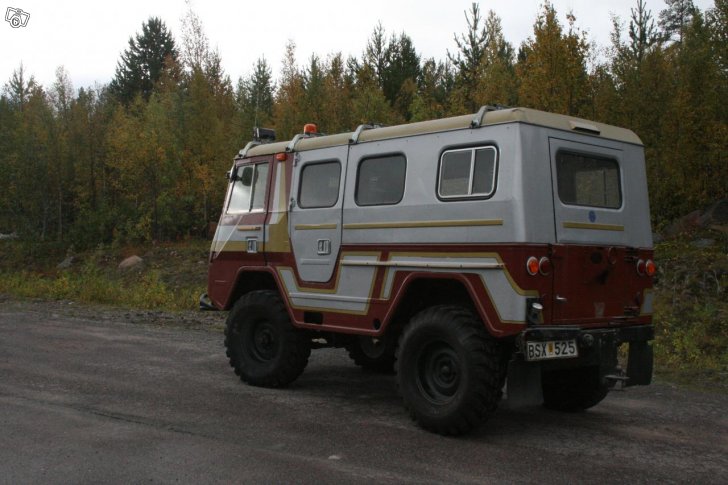 The seller of this Swedish puppy only included two pictures of the vehicle’s exterior, but they were enough to get our mind wandering into visions of Battlestar Galactica dogfight reenactments being carried out on remote logging roads through the arctic landscape of northern Scandinavia. Normally these troop transport vehicles are painted in austere single shades of tan, gray or green, so to see one in such a disco getup is alarming yet alluring at the same time. Because there are only two images of the featured vehicle, this enthusiastically underdressed spokesperson for the Valp found on a Spanish language website would like to demonstrate the load capacity of its optional rear hatch mounted spare tire: 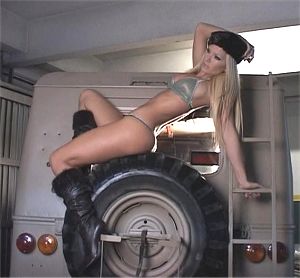 We know most of our readers are far, far away from this puppy but we wanted to share the kind of thing that passes for an acceptable daily turismo in the Norrland – where the well-earned DT labels of Zombie Proof and Draugr Proof may actually come of some use as you are running over reanimated corpses in the woods. With the exchange rates being what they are, if this B20-powered box is as nice as it looks, $7470 seems like a great deal to us. If you take a trip north to find out for yourself, please let us know how it went…if you survive the attacks of the Draugrar, that is.