OK, let’s get this out of the way…Ja, das ist Dieselwagen
langsam. Yes, this Dieselmobile is slooow. Not just glacially slow like a non-turbo Volvo 242, not even disappointingly slow like a DeLorean. You should know what you’re in for with this Stuttgarter. Molasses in
January has been talking trash to it ever since they raced at a
stoplight and Molasses won. What we are talking about here is akin to continental plate tectonics. But with that slowness comes heft & solidity. Gravitas. There is a certain charm in a vehicle that feels like it is better suited for use as a  fallout bunker or “safe room” than a mode of transportation. Which is why we’re skipping the painfully obvious Slow badge and rating this oil burner as Zombie Proof instead. Assuming you haven’t been swallowed up by the lithosphere, check out this 1980 Mercedes-Benz 240D in Canyon Country, CA for $3600 OBO. 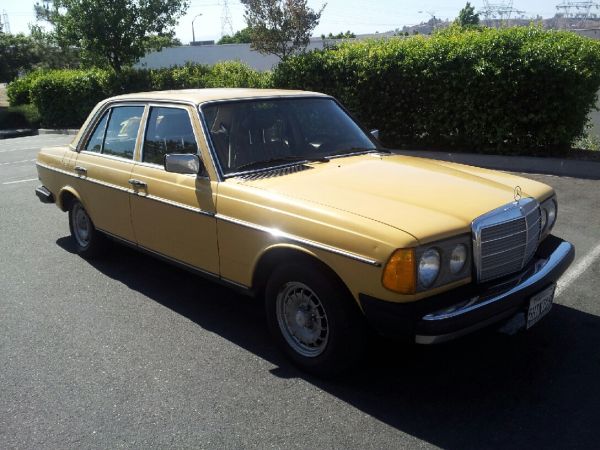 This fine yellow W123-chassis sedan was made back when Daimler built them to last forever – and guess what – it’s still here 32 years later, clattering away nonchalantly. The reason we’re featuring the überslow 240D model instead of the more common (and usually turbocharged) 300D lies between the front seats – the 4-speed manual transmission. In Europe the W123 was available with any drivetrain that could be possibly imagined by a mensch, but here in US and A the only way to avoid the slushbox was by settling for the 72-Pferdestärke (71.02 hp) OM616, 2.4L 4-cylinder, non-turbo Diesel. 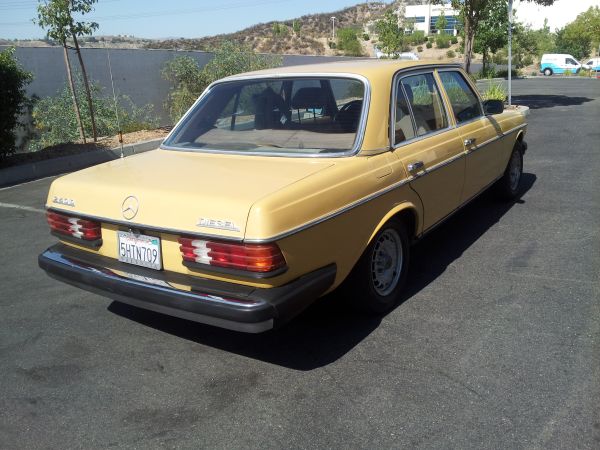 The upside is that it may actually be faster (or feel faster, anyways) than a comparable auto/turbo 300D sedan. Fair warning though: rowing your own gears behind a 1950’s-tech Diesel can be a frustrating experience. Instead of a simple blip of the throttle followed by a reasonably quick clutch uptake, the technique is more of a “rev, wait, rev, OK – maybe that’s enough engine speed, slowly lift with left foot, slowly…clunk” and the engine stalls. There’s a steep learning curve, but hopefully no steep hills when you’re settling into a 240D for the first time! 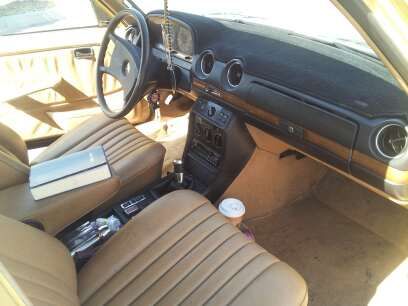 This particular Berlin Taxi looks mighty fine in our eyes and the appropriate 70’s hue mustard yellow paint is claimed to be original. The MB-Tex vinyl seats are in perfect condition as expected. We think Daimler sent a mission to the Genesis Planet in the Mutara Sector to source this super space-age material; it always seems fresh. The seller claims the A/C blows cold  which is a small miracle in itself. This car comes complete with prayer beads and a bible on the armrest. Maybe the functional A/C is powered by guilt!


Another benefit over the more luxurious 300D is simplicity – with manual crank windows and a manual 3-knob HVAC system, they stand a chance of functioning 32 years later. The electric power windows and Chrysler-sourced vacuum spaghetti monster thermostatic climate control found in 300Ds are some of the most common failed systems in the remaining W123s that have managed to avoid the junkyards. 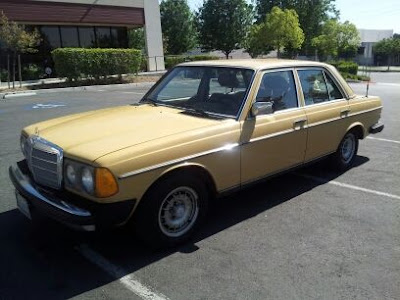 The editors here at dailyturismo have had our share of W123 Benzos, and we can still hear the “rack-rack-rack” clatter of their all-mechanical Diesels if we close our eyes tight enough. The 300TD wagon demonstrates dominance with utility and style, but this 240D would probably make a better daily driver. For an upgrade in the speed department, we would recommend kluging a turbo onto this engine, modifying the Bosch P-pump injector control plate, and cranking up the boost – what’s the worst that could happen? Alternatively, swap in an OM617.952 5-cyl turbodiesel complete with its oil squirters and 70% improvement in power! The ultimate in IDI reliability coupled with the lightest, simplest W123 chassis and manual trans would be a winner in our book.