Thorsday posts typically contain some original-condition slow-mobiles-to-nowhere that look great, have lots of peppy Norse attitude and are found at rock bottom prices. Today we are going to treat that tradition like a politician treats written law and hope the ethics committee doesn’t come after us. This 1978 Volvo 262C “Bertone” protouring-custom-race-pro-chop-top-ultimate-street-car-rare recently failed to meet its reserve on ebay with bidding going up to $7100 – we hope it shows back up on ebay without reserve so that someone can buy this beast (big smile to scot for the tip!) 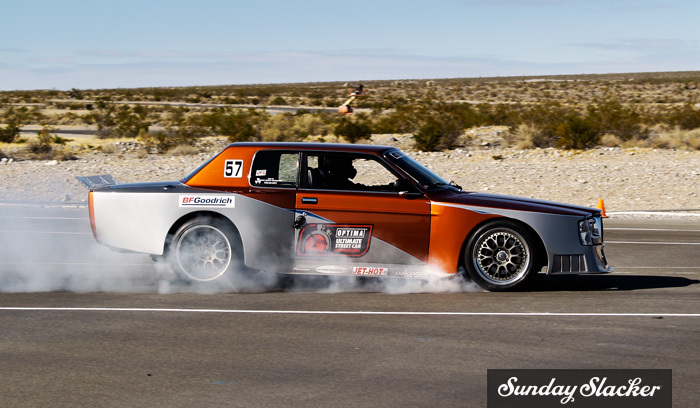 This ‘Sunday Slacker’ is not your average 262C Bertone coupe. No – it’s been cut apart, widened, jammed full of American muscle and sprayed with a two-tone copper on silver metallic livery. The engine swap is described as an “L92/LS3” which is a bit cryptic for several reasons. The L92 engine is a 6.2L all-aluminum truck/SUV engine, but is also the name of a cylinder head sold separately by GM Performance Parts. The LS3 is another 6.2L aluminum small block V8 found in Corvettes, Camaros and Holdens – but to add to the confusion, it uses L92 cylinder heads from the factory. Whatever this engine actually is, we’re sure it makes at least 450 horses of Blue Blooded Patriotic Power and can instantly turn those steamroller-width rear tires into huge clouds of smoke on command.  Regarding smoke, the above photo shows front wheel lockup from likely semi-functioning abs and is a nice way to flat-spot your tires. 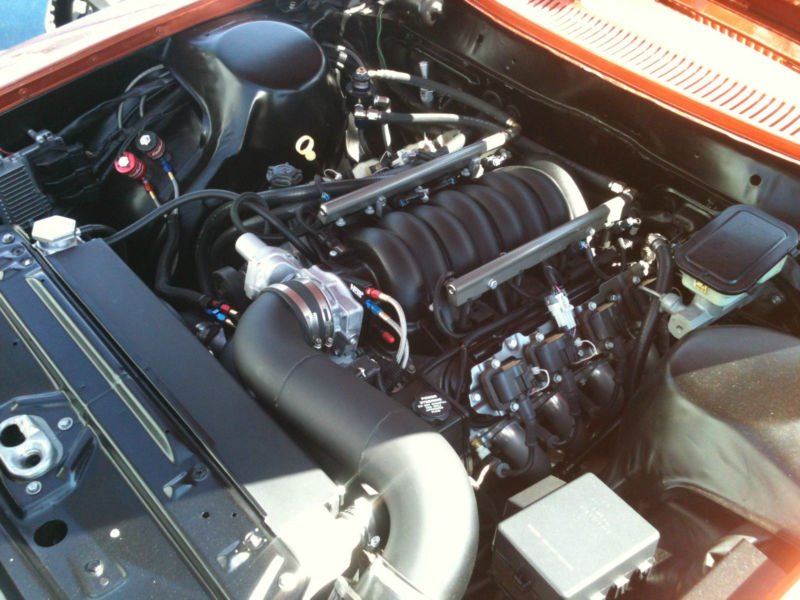 This car is a study in conundrums. The interior is actually fairly low-key and restrained compared to the attention grabbing exterior modifications. We can see a Sparco steering wheel, some moderately bolstered ‘sport’ seats, white painted gauge cluster, an aftermarket stereo and some custom leather upholstery work in the back. This is an interior that can’t decide if it prefers show or go…so it tries for both. A dedicated track car (be it road racing or drag) should have a one-piece SFI-approved racing seat, full 5-point harness, and full roll cage – or at least a roll bar with rear braces. We don’t see any of that here, which raises the question: what was this car built to do? 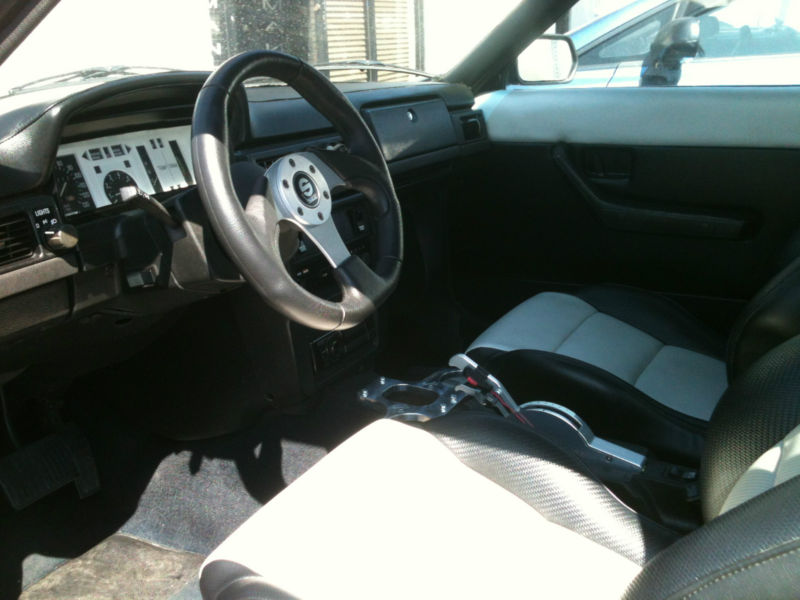 It seems wildly impractical as a regularly driven street car and would attract all the wrong types of attention from local authorities. It does, however, look extremely menacing in front view, and the photo below makes this 262C look like a wicked wide-body DTM or British Touring Car. The builder clearly has some fabrication skills – the fenders and airdam must be custom one-off parts. However, it’s clearly not a dedicated track car either, as evidenced by the previously mentioned lack of safety equipment, plus the fact that the interior retains all of its soft bits and has not been stripped down in the name of weight minimization. 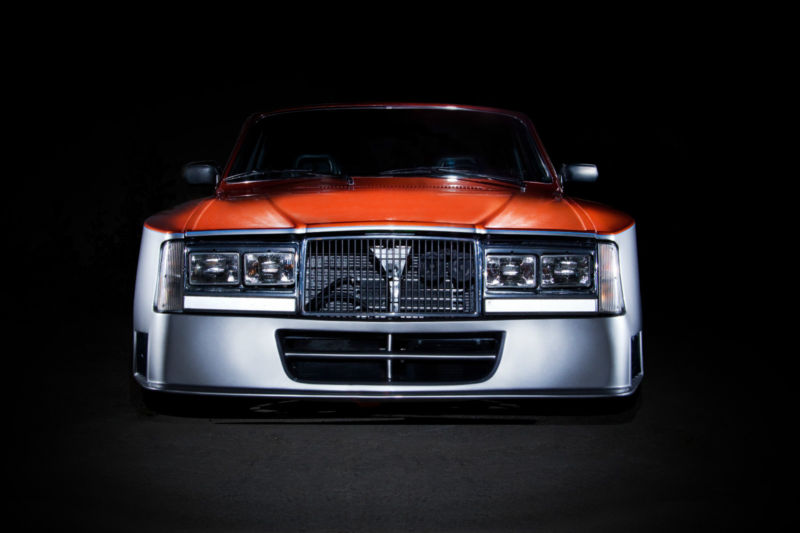 OK, so this is a dual-purpose street/strip car – plenty of people choose to go this route with custom builds. But wait, it is not built just for drag racing as the giant nitrous-fed V8, 4L80 automatic transmission and ‘tubbed’ body with massive rear meats would lead you to believe. No, the seller says it is also an autocross winner and “feared and respected” on road racing tracks. In that case, a manual transmission, minimal mass and improved front/rear balance would make it far more ideal, right? Well, the battery has been relocated to the trunk, there is a Gurney flap style rear spoiler, and the suspension has been completely and impressively reworked into a custom unequal-length A-arm setup in the front and now rides on coilovers on all four corners. But the statement “70/30 WITH ROAD RACE SPRINGS” is a head-scratcher; is that the weight distribution front/rear? If so – it’s terrible – and nothing to brag about on a spec sheet! 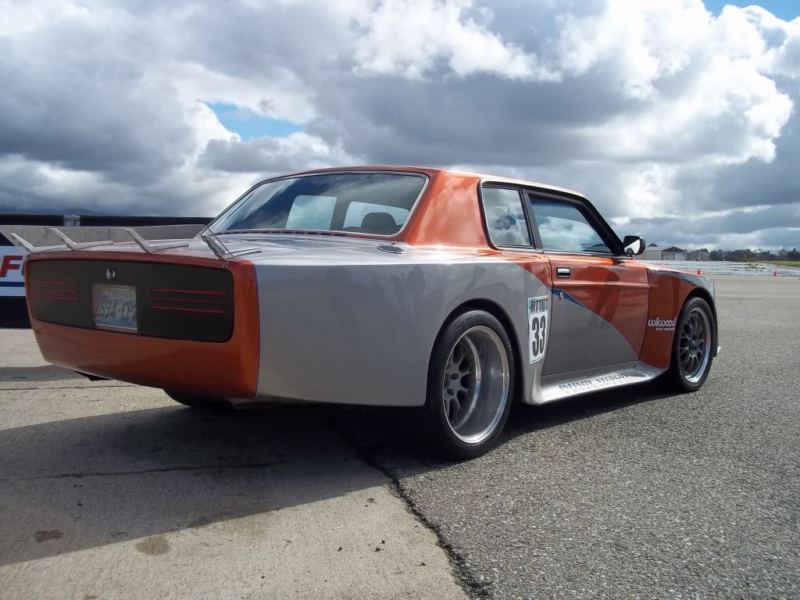 We like this car for its uniqueness & high quality, and for the utter madness it embodies. But the source of our confusion lies in its mission statement – or lack thereof. Who puts an automatic in an autocross car? Why doesn’t a 10-second drag car have some sort of roll cage and harnesses? Why does a competition vehicle need an audio system that “kicks some serious ass?” These are all rhetorical questions of course – we realize this car was meant to be a compromise and was built with many different intended uses in mind.

Perhaps the choice of the factory chop-top Volvo 262C Bertone donor vehicle is entirely appropriate in that case. The 262C was not, as one would think, designed by Bertone and built by Volvo. No, this Swedetalian was actually drawn up in-house by Volvo designers, who then contracted with Bertone to build the bodies out of rust-magnet Italian steel in Torino. An odd choice – just like the thick C-pillar chop-top styling – just like the idea of a Volvo luxury coupe – just like the decision to make a drag/autox/roadrace/street monster out of one!

If you find another Ultimate Bertone (unlikely since they only made 6,622 of them) by all means, email us here: tips@dailyturismo.com

Update: This Thorsday feature car was also a Turbobricks feature car, written up in 2007. More history, details, and pictures of a previous iteration can be seen here.