Original first-generation, rear wheel drive Celicas are getting hard to find in any condition, and definitely do not litter the streets and strip mall parking lots of California like they did in the ’80s when they were just used cars. Despite popular opinion, even once-plentiful moderately priced Japanese cars can be elusive in the State that Rust Forgot; these days, many owners of structurally sound 20+ year old cars will sell the vehicles for scrap value (about $500) when repair bills start to mount and the parts supply is drying out for their particular “classic.” None of that seems to have fazed the seller of this sharp red 1973 Toyota Celica ST though, which has been upgraded with a period correct twin-cam 18R-G engine and later alloy wheels. It is not currently running but offered for a DT-budget-friendly price of $5500 OBO via craigslist in Sacramento, CA. 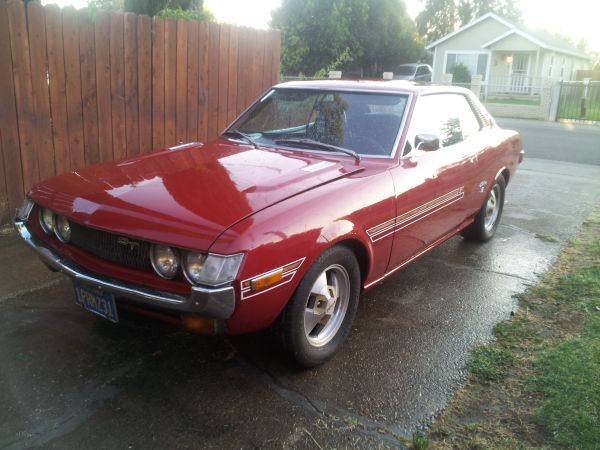 We have featured a 1st-gen Celica before – this ’74 GT appeared to be the cat’s pajamas in the seller’s ebay ad, and we wonder what became of it. Unlike that car though, this ’73 wears an attractive shade of red that could be the original paint; we’d bet it’s at least the original color but the intact side stripes might mean it has never been resprayed. It also doesn’t have a white vinyl top – which would be a plus to most buyers in 2012 unless they are afflicted with a rare and terminal case of Broughamitis. Compared to that ’74 GT, this ’73 lacks the rubber bumper overriders (a plus for aesthetics) but also likely lacks the 5-speed manual – the ST came standard with a 4-speed and we don’t see any mention of an upgrade in the ad. 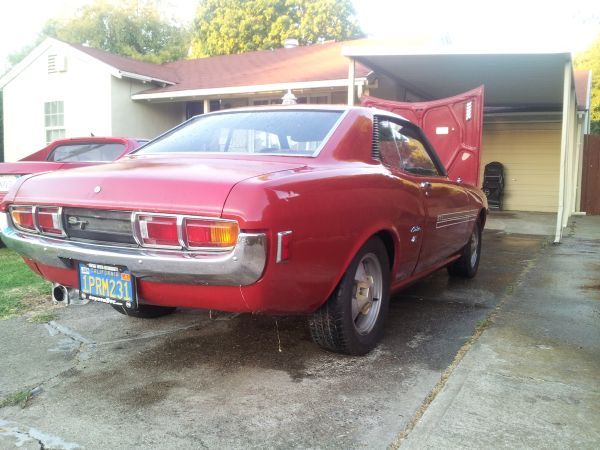 What we do see mention of, however is the sweet little 18R-G twin-cam 2.0 liter four that has been swapped in. And this is a BIG plus in our book, especially at this price. The original engine in this car was the comparably wheezy and not particularly reliable 18R-C single overhead cam variety. In comparison, the 18R-G generated between 30 and 45 more hp (there were several versions made) for a max OE output of 145 hp @ 6400 rpm, and 130 lb-ft @ 5200 rpm. Interestingly this is still an 8-valve engine, but the use of separate camshafts for the intake and exhaust valves allows them to be canted at a more flow-friendly angle and is ideal for use with a hemispherical combustion chamber shape. Yup, this thing’s got a hemi, but not with a capital H! 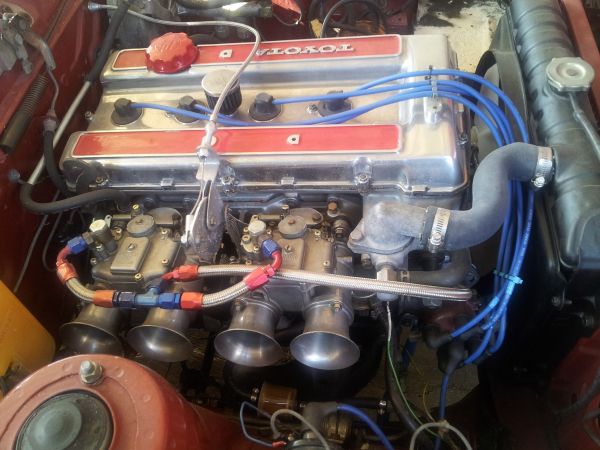 The twin-cam arrangement also allows the valves to be larger, decreasing flow restriction, increasing volumetric efficiency and hence power. Additionally, with lighter valvetrain components a DOHC (double overhead cam) mill can rev to higher engine speeds, also allowing higher power output. The 18R-G was not exactly rare in its time; about 150,000 of the various configurations were produced and installed in Japanese and European versions of the Celica, Corona, Corolla, Carina, Chaser and yes…even the original RWD Camry! The 18R-G can trace its head design back to the exotic 3M inline six, which was developed by Yamaha and used in none other than the stunning 2000GT. It even has rally credentials – this isn’t your run-of -the-mill lazy pickup engine (even if it is an R-series). 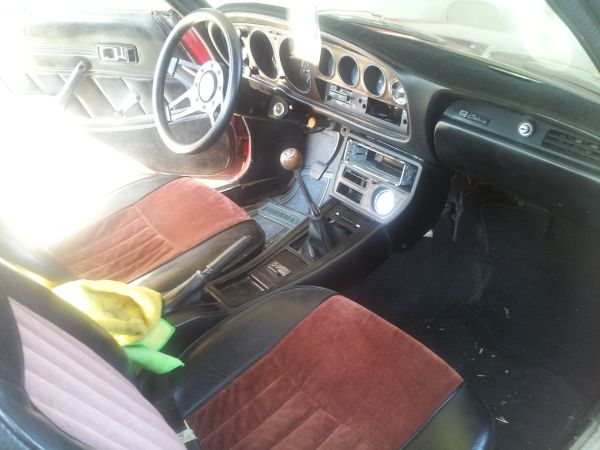 The interior of this red rocket looks to be very well kept; we do spot an aftermarket steering wheel and an “Oakland Edition” invisible stereo, but otherwise it looks unmolested. We haven’t seen the red cloth / black vinyl seats before but suspect they are original; if not they look to have been professionally reupholstered. Even if the original W40 4-speed manual is still in place in this ST, swapping it out for a freeway friendly W50 5-speed should be dead simple. Gear ratios 1-4 are identical so acceleration would be unchanged but the addition of an overdrive gear would net better fuel economy and quiet this little hemi down at higher speeds…not that you’d want to…nevermind, keep the 4-speed and wind that baby up. 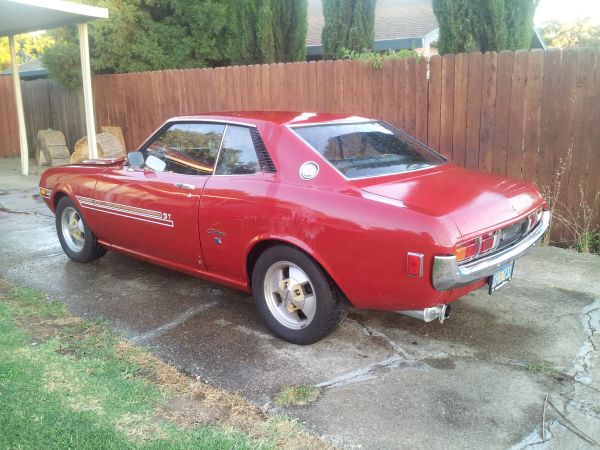 This car is lightweight, rear-drive, has tons of style and is smog exempt in our home state of CA…we are seriously tempted to tow this baby home and put it in our own garage so please, for our sanity’s sake, beat us to it! The seller’s claim that it will not run because of a wet distributor merits further investigation but if that is the only problem, solving it should be simple. A points-less (not pointless) electronic ignition kit would be a good upgrade anyways and will not detract from the underhood aesthetic. The ’80s Celica alloy wheels are an interesting choice (not our first) but work surprisingly well with the early ’70s styling.

The blue license plates seem original at first glance but the 7-digit sequence replaced the earlier 6-digit plates starting with “1A****” introduced in 1980, with “1S****” plates being made in ’87 – see this site for clarification. So this car was either brought in from out of state around 1986 or had its plates reissued for some reason. In any case, check for rust since there are no replacement body panels being produced for these cars – if the tin worm has eaten through, it’s time to call your favorite metal fabricator and buy him or her a beer. If there’s no major rot, score – you just found a cherry slice of “J-Tin” pie. She’ll put a smile on your face, ten miles wide!

Find a cooler Celica (running or not)? Email us here: tips@dailyturismo.com