The second generation Toyota Corolla (E20) is an example of a cheap/fun/rear wheel drive vehicle that used to come from the maker of beige appliances.  The two door  TE-21 ‘peanut’ shaped sedan was available with a number of low displacement 4 cylinder engines – but the owner of this 1971 Toyota Corolla installed a Mazda rotary engine and is selling it on ebay (currently no bids, min bid $4800, located in San Juan Capistrano, CA). 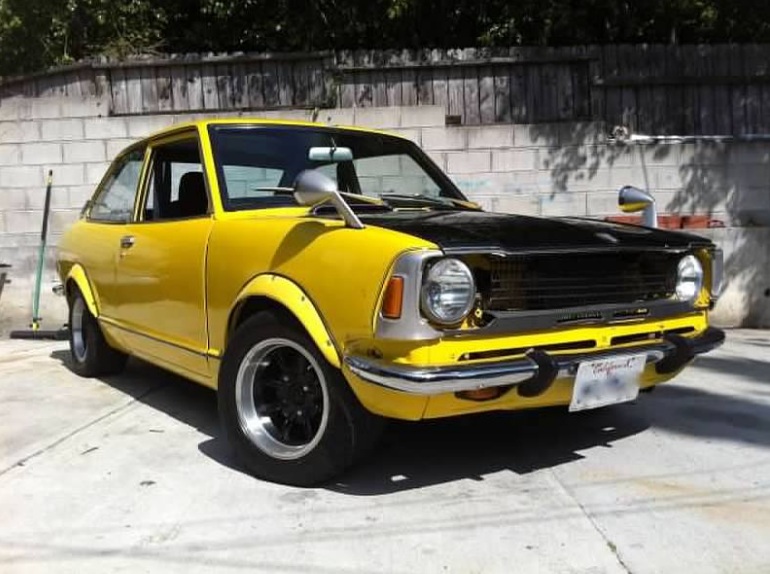 Lets get this out first: this yellow peanut isn’t something you are going to want to show up for; a job interview, meeting your fiance’s parents for first time, parole interview, DMV driving test, Clown school 10 year reunion or an intervention for a friend who is addicted to car websites.  Its got JDM style mirrors that protrude from the fenders like antenna distracting you from the glass black hood & JDM fender flares -but we have to admit love for the smiley face yellow color.  The owner says its a wolf in sheep’s clothing -more like a wolf in a clown suit… 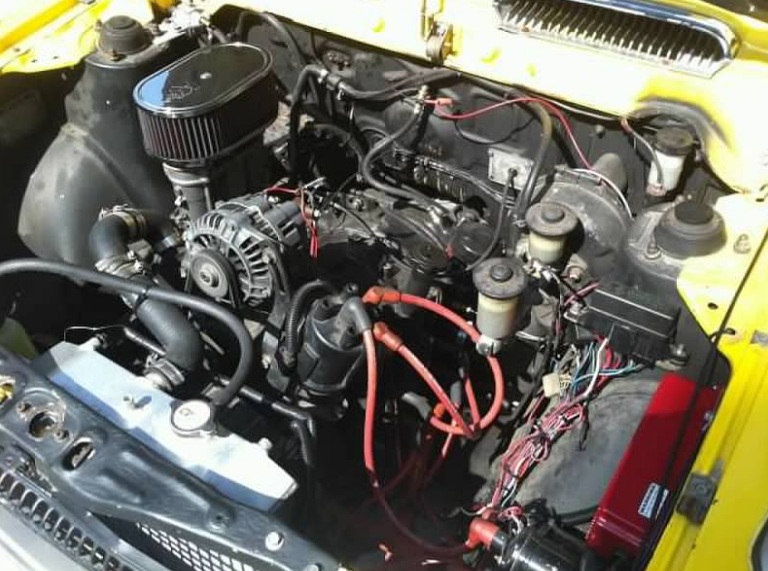 Open the hood and where you’d expect to see a 1.6 liter Toyota inline 4 -you are confronted with an object that looks like Robocop on life support.   It is a Mazda 13B from an 80s RX-7, but the fuel injection system and turbocharger have been removed and the spinning mess is being force fed by a Weber downdraft carburetor.   We like carburetors and BBQ grills as much as the next guy, but we have a difficult time calling this an upgrade…according to the seller Mr Peanut runs “better” without the EFI top-hat and turbo monocle.  He also mentions that the car “does leak slightly as almost every rotary does” and “I would maybe get rid of oil meter and just use oil/gas mix like a 2-stroke”.  Rotaries are known to burn oil, but we’re not sure if they all do Exxon Valdez impersonations like this one and we are fairly certain it’d be a bad idea to run premix in a street car… 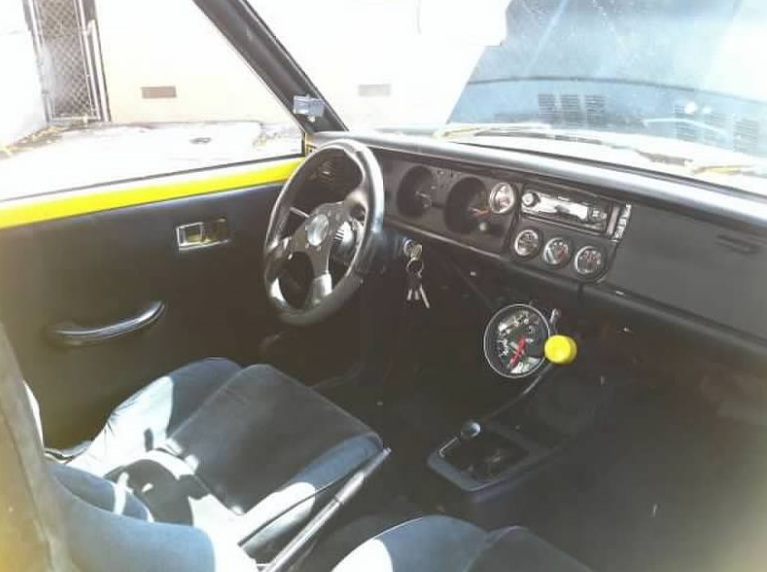 Since this car is used for autocross (a ‘competition’ involving cars, cones, straw hats & endless committees) the interior has been prepared for ‘racing’, including the installation of a dinner plate sized tach that would make Flavor Flav jealous.   The original thin rimmed Toyota steering wheel has been replaced with something that looks like it should have a Wii remote sitting in the center – but it probably gets the job done and Corolla’s of this vintage are known for their fun to drive nature.  He does say the car is faster than its suspension can handle – and that is one of the keys to a good daily turismo. 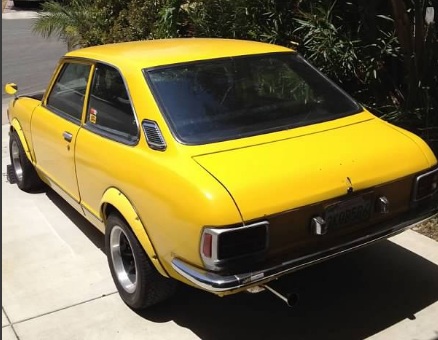 It would be negligent to not mention that the car does have some issues – its been in an accident or two and has some rust under the “Andrea the Giant” sticker.  We think he means an Andre the Giant “OBEY” sticker – and we are not the biggest fans of using experiments in phenomenology to cover body damage – but at least the seller seems to be honest about the cars deficiencies.

Bottom line: Does this peanut have the roast to be your honey or would you pulverize it into butter for your toast?

See another clownmobile for sale?  Got a nice straw hat you can lend us for chasing cones?  email us here:  tips@dailyturismo.com