When this car first hit daily turismo’s radar last week, it was closer to the 10k range – but the listing expired and now its been dropped a few grand and is ripe for picking.  The Karmann Ghia was sold from 1955-1974 using VW Beetle Type 1 chassis/engine, styling by Carrozzeria Ghia and built by German coach-builder Karmann.  This 1969 Ghia is for sale on ebay for $7k buy-it-now on ebay and is powered by a shocking engine transplant. 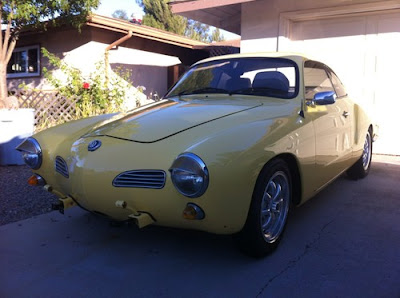 The Karmann Ghia was never sold as a sports car – it was more of a cheap grand tourer, offering fuel economy and reliability of the VW type 1 – combined with sportier good looks at an increased cost and weight.  This particular example was purchased by the current owner in “show car” condition – but since then has been in an accident and had an engine fire…at least the seller is honest.  Lift the hood (in the rear) and this is where the car gets interesting.

Originally the Ghia had a rear mounted 1.5 liter flat four putting out 54 horsepower and a foul racket from its exhaust pipes.  Instead we are greeted by some large diameter wiring and mess of 12-volt batteries hoarded like tin foil at a UFO convention.  This Ghia has been converted to run on electricity generated by a leaky nuclear, fish killing hydroelectric or sky-darkening coal power plants. 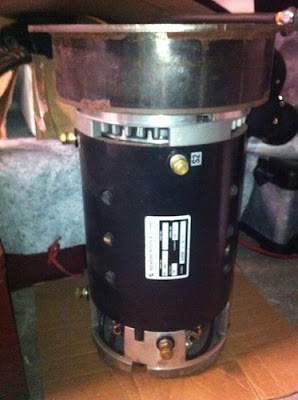 The heart of the beast is a 400 amp electric motor running from a 120 volt controller good for about 48 kW by our calculations.  48kW is 64 horsepower – but electric motors are entirely different in character from gasoline engines.  First, they produce prodigious amounts torque at low motor speeds and can catapult the vehicle from a standstill or twist axles into twizzler shaped scrap metal.  Full kits like this one run for about $4-6k on the e-volts.com website.


Inside the Ghia needs more work – but at least the seats look in nice shape and an aftermarket steering wheel with exposed horn wiring will look okay once properly sorted.  The bumpers also need to be replaced or re chromed – but this is a Ghia – so parts and aftermarket support is excellent.  This car will need more than an afternoon with a vacuum cleaner to make it a good daily turismo – but for someone with a short commute it could get the job done.

Does this ride meet the needs for your daily commute or will the range anxiety give you performance issues?

Got another pile of parts that would look good in your garage?  email us here;  tips@dailyturismo.com