It has been 5 days since we’ve posted a Volvo – please don’t let us go that long again – we are having withdrawals. Even though we are Volvoholics, today’s little red coupe is also the perfect prescription if you are suffering from a case of Alfa GTV fever, but don’t have the cash to cure it with Italian machinery. The Volvo Amazon / 122S coupes feature classic lines, legendary reliability and a certain Nordic charm, while still changing hands at reasonable prices unlike their Milanese counterparts. Check out this claimed “all original survivor” 1967 Volvo 122S 2-door in Ona, West Virginia on ebay with reserve met and auction ending tomorrow. 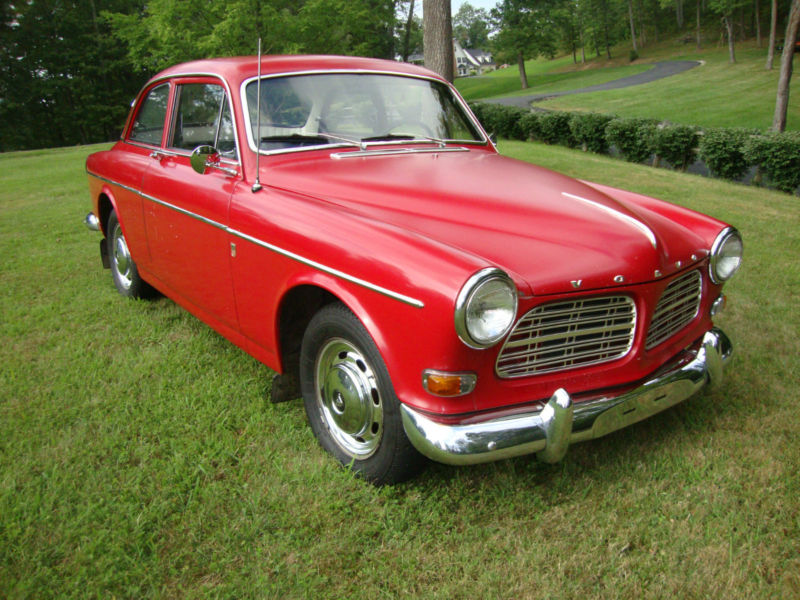 Our last Amazon was a yellow wagon that had been beaten with the ’80s stick – not so with this mostly original example. This car’s seller claims to have owned the little beauty for about six years and says that most of the paint is original with evidence of a few touch ups over the years. That’s pretty remarkable if it’s true, considering that this baby rolled off the assembly line the same year Harriet Vanger mysteriously disappeared from Hedeby Island – in the trunk of an Amazon, no less. 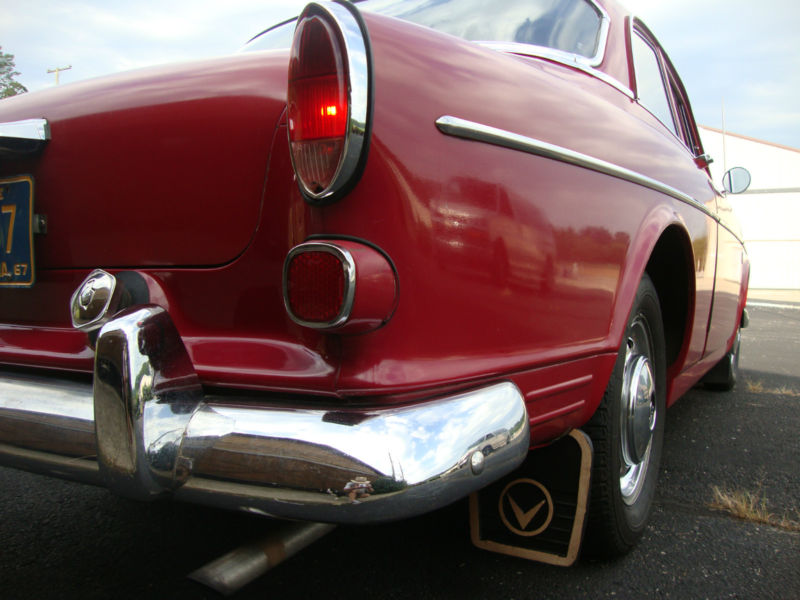 We love the Amazon’s styling – it was penned by Volvo designer extraordinaire Jan Wilsgaard, who was born in Brooklyn but went on to design almost all of our favorite vintage Volvos. Although he didn’t design the P1800, he was responsible for its transformation into the sleek 1800ES. The Amazon is clearly inspired by ’50s American cars, with its pontoon fenders, vestigial tailfins and wide-mouth grille. It’s a stark contrast to Wilsgaard’s subsequent work on the 140 and 240 series. We love the bricks but get the sense the mästare prefers the curvier early cars – when asked about the incredible success of the 240, he said “it might be due to the fact that the car is a little square and sluggish, just like the Swedes themselves.” 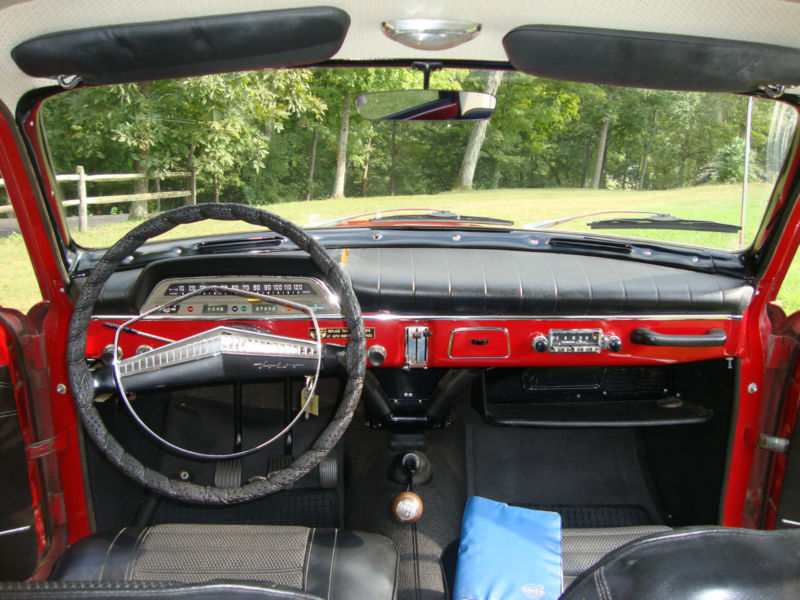 Red on black is a fantastic color scheme for this car, and the interior doesn’t disappoint. We would feel like a tugboat captain or Jack Sparrow behind that huge upright thin-rimmed steering wheel, and sleep sound knowing that the foam pad on the dash would keep errant noggins from being smashed unnecessarily during panic stops. We don’t understand the plaque on the dash though: “Replace this Volvo in 1978 at Auto Martin, Grant’s Pass”…is that some sort of early viral marketing strategy – a not-so subtle reminder that this Svelte Svenskabilen would be out of style in just 11 short years from its original purchase? 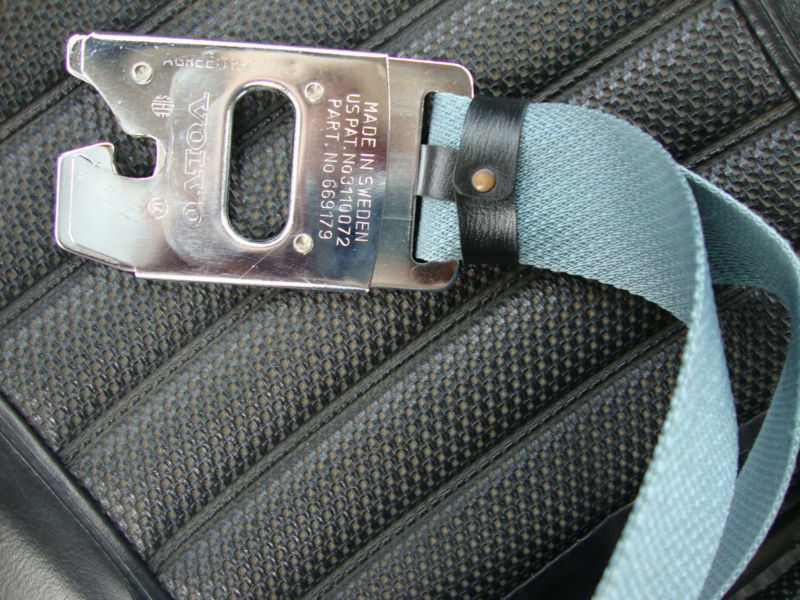 Regardless – we think these cars are timeless and could stare at them all day long. Don’t leer too obviously though, or an appendage might be chopped off by the cigar-cutter seatbelts as punishment. These were original equipment on ’60s Volvos, which were some of the first cars to come with belts, back in the time when most people thought it would be safer to be “thrown clear” of the wreckage in a crash. They hook into a large steel loop between the seats. Perfectly logical but incredibly novel in 2012! 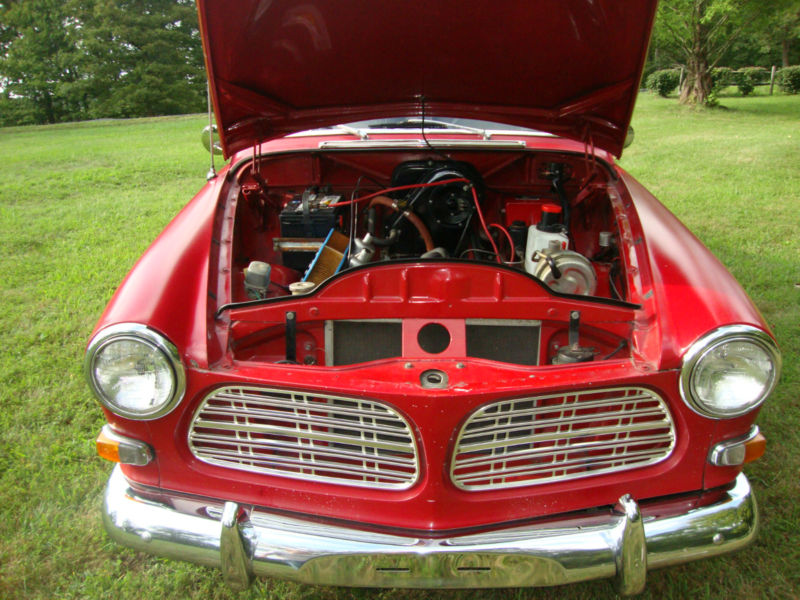 The engine bay looks as clean as the rest of the car, and if visual condition is any indicator, the B18 4-cylinder probably sounds like a sewing machine at idle. Even though these engines lack a cross-flow head (intake and exhaust ports & manifolds are on the same side of the engine) they make up for their agricultural nature with a “rorty” exhaust note and good fun-per-dollar value.

The ebay ad looks to have attracted several skeptics re: the claimed originality…so what say you, DT faithful? Would you plunder this beauty like a Viking, or turn a cold shoulder and fly south for the winter?

Find a Sweeder Volvo you want to share? Email us here: tips@dailyturismo.com