We at the DT love classic 60s/70s/80s Mercedes cars for good looks, rock solid build quality (before the marketing weenies in the unholy Daimler-Chrysler years took over and forced engineering to compromise quality in an exchange for wild dreams of market share) and they are rarely seen in the wild.  The 4 door W110 sedans are a bargain today and we originally we had our eye on a 67 MBZ 200 on ebay (bidding at $1425 reserved not met)- but then we found this 1966 Mercedes-Benz 230 Hechflosse on craigslist for $3950 located in SF Bay Area, CA. 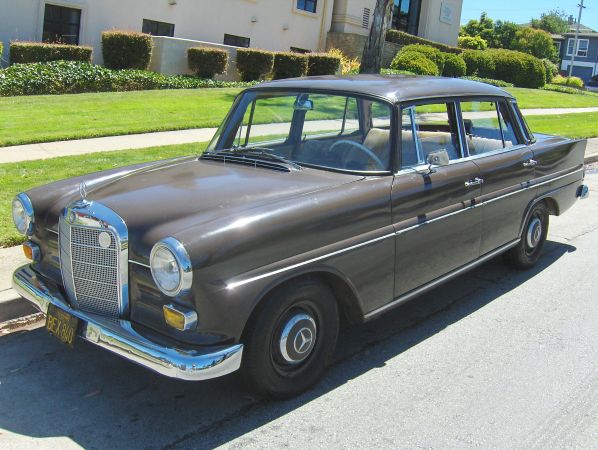 The W110 Hechflosse (fintail) chassis was produced between 1961 and 1968 and was the low end Mercedes-Benz – equivalent to a modern C-class- with the notable exception of being a well assembled car.

Mercedes produced over 600,000 of these tanks and you can find plenty for sale – but picking a winner is important.  First off we love this one because its got that turd brown color that just screams suede shoes and horn rimmed glasses!  It also sports what looks to be its original California black plates (although the BEX sequence is correct for 1963-64, maybe an early 65… so this could be a YOM replate or plates that were issued from a rural DMV that kept is inventory for long time.) and the car is claimed to be 100% rust free. 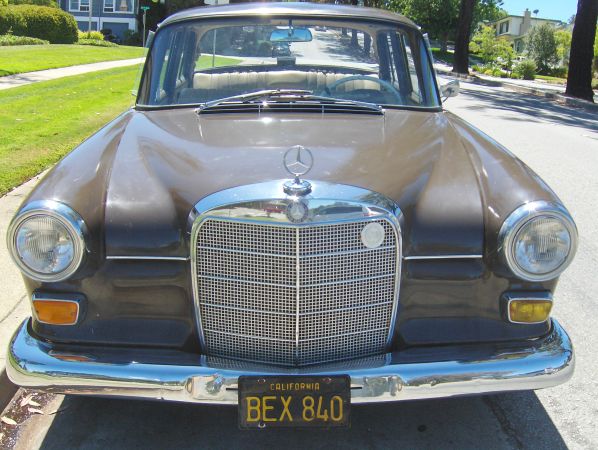 Pop the steel hood (with the help of a few weightlifter friends) and you will find an M180 2.3 liter ‘mid sized’ single overhead cam inline 6 cylinder gasoline engine mated to a 4 speed manual transmission.  The mid-six makes 118 horsepower and 137 ft-lbs of torque giving it better acceleration than the inline 4 equipped 200 sedan, but don’t expect it to be fast or able to keep up with traffic. But, these u-boats do surprisingly well at freeway speeds and feels/drives like a much newer car. 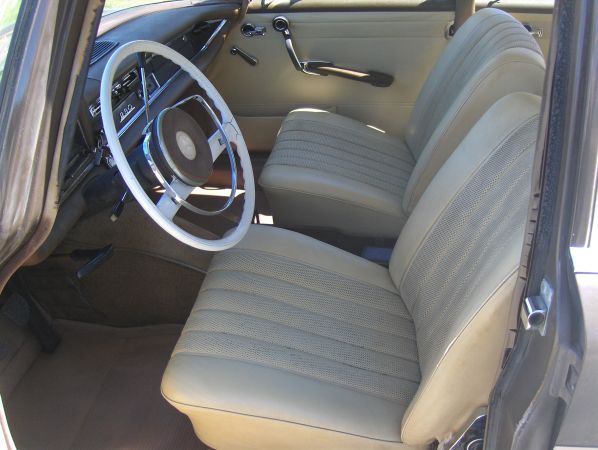 The interior of this 46 year old machine is in remarkable condition and looks like you could eat wiener schnitzel from the floor – just don’t eat Wiernerschnitzel in the car …because that stuff is horrible.  As previously mentioned this car is equipped with a 4-speed manual transmission – but its a column shift aka four-on-der-baum.  Column shifters take some getting used to when you are accustomed to floor shifters – but you aren’t going to be snick-snicking though the gears in this car anyway – its a cruiser, shifts should be slow…like stirring a käsespätzle. 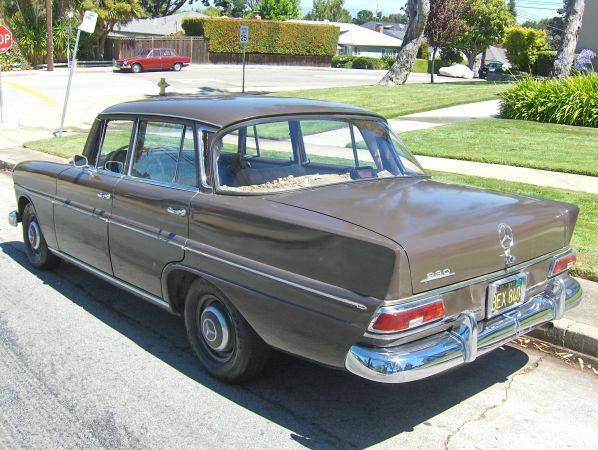 This car was originally purchased by the owner via the MBZ overseas delivery program (probably to avoid taxes or smuggle schnitzel into the country) and has only had two owners if you believe the seller…but he isn’t one of those original two…so has it had 3 owners??  I really hate car amateur flippers who buy a car and don’t title it so that they can keep the ‘owner count’ low, they drive the car for a few weeks and talk about how ‘dependable’ it is… – but the original paint keeps us from complaining too much about this one.  We at DT much prefer an original paint with some patina to a cheap respray or even a good respray – nobody puts on primer and paint like the factory and well cared for original single stage paint will last for years.

Does this brown trout have the fins to swim up river?  We think this is one hechflosse of a good deal and would drive it everyday – just no eating in the car please.

See another classic pile of German steel for a steal?  email us here:  tips@dailyturismo.com