Time for Volvo Thorsday, Round 2! Last week’s debut was such a success, we wouldn’t dare turn down another sweet vintage Norse wagon. The 1800ES from last week is a stylish little 2+2, but today’s example is a traditional 4-door family truckster. Given the curvy lines inspired by 50’s American car design, this squareback manages to retain gobs of aesthetic appeal while still getting the job done. Check out this perky 1963 Amazon (aka 122, aka 220) wagon in Lakewood, CO for $4850 OBO via craigslist. 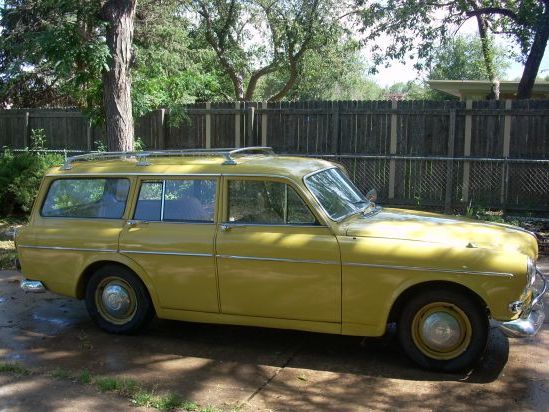 We can’t be sure from the shady pictures that the seller took, but it looks to be about the same hue of yellow as our last vintage Volvo featured, this ’71 142S.We hope it is a nice mellow mustard color and not a loud obnoxious taxicab yellow! Even though it has been repainted, there is a good chance that this is the original color, which is a big bonus for a ’60s Volvo. The current paint job from the 80’s still looks good, seemingly without any rusty surprises bubbling up from under the surface. We would still check the rocker panels, floor panels, and rear lower sections of the wheel arches to be sure there isn’t any FeO lurking. 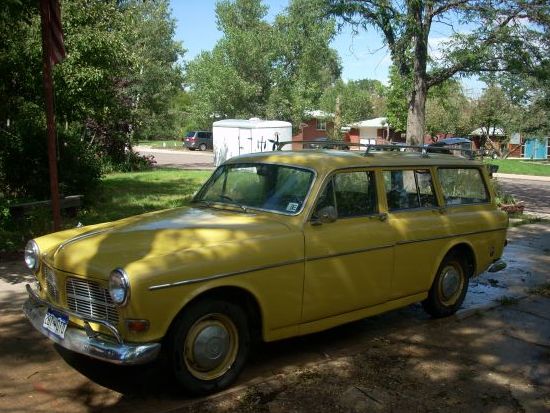 The Amazon (as it was called in Konungariket Sverige) was designed all the way back in the early 50’s, started rolling out of the factory in 1956, and in typical Volvo stubborn fashion it soldiered on all the way through 1970 with very few changes. It’s a car with strong shoulders – the greenhouse is a bit narrower than the doors and body below, giving some shape to the sides. This car does not look like the box that it came in. The shouldered theme that continued on through the 140/240 series was dropped for the boxtastic 700/800/900 cars, and returned in the early 2000’s on the curvy S60 and S80. One could say this wagon has strong shoulders in a figurative sense too – plenty of space and load capacity for a mess of flat pack furniture in the rear and loaded up on that long roof. You could refurnish your entire hipster loft in one trip with this baby (skinny jeans & fixie not included). 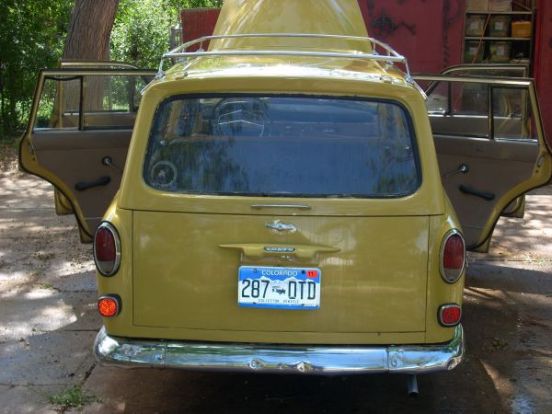 Even though this seller neglects to include pictures of anything mechanical, the engine has a claimed 2.0L overbore upgrade, headers, and dual carbs, making it akin to a B20 and probably able to generate about 130hp max on a good day. That should be enough to keep your kids happily sliding around on that basic bench seat while you attempt to dorifto the box (just don’t ghost ride the whip with children on board). Seatbelts? Please! This was 1963 – you and your passengers will be tumbling about freestyle if you roll this baby. The main downside of this yellow beast is that it has “sat too long,” leading to fuel delivery issues and a dead battery. We can only speculate about the cause of the hole in the gas tank – maybe the local Denver meth-heads got thirsty? 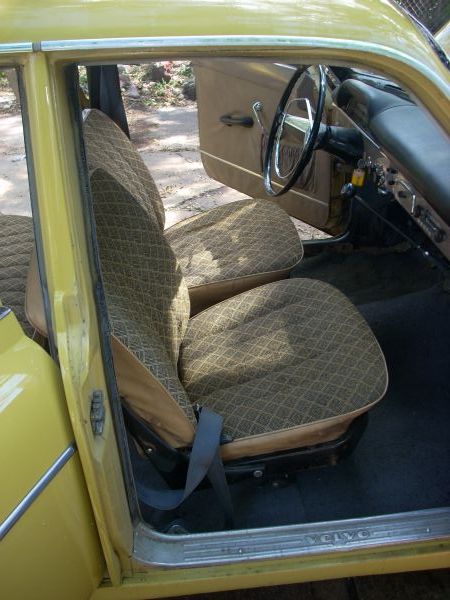 In addition to nice paint and no visible rust, this Amazon seems to be cosmetically stock as well, down to the original steel wheels with the “V” logo dog-dish hubcaps, VW-style towel bar bumper ovverriders, and metal roof rack. It could use a touch of lowering in the front but we wouldn’t slam it to the ground and ruin its utility value. All the trim seems to be present, the door cards and seats do not look like they’ve been chewed on by a pack of restless Vallhunds, and as a bonus the buyer will be treated to questionable reupholstery work – the 80’s checkered pattern reminds us more of grandma’s tea cozy than an Austin Powers swinger shack, but we could live with it for a while.

This is the right type of vintage Volvo to get into cheaply – solid body & paint, totally complete, with a few minor mechanical issues that are too much for the current owner to handle but should be fixable over a long weekend of wrenching. We’d talk the seller down into the low $3k range, add some rally driving lights a-la the Volvo 123GT, and maybe some Minilite-style alloys. Then we’d enjoy an imaginary time/speed/distance rally during the daily commute. Call us crazy! Please!