The Isetta was originally designed and built by Italian refrigerator manufacturer Iso.  Shaped like a small ice-box, the Isetta’s diminutive size and stratospheric fuel economy numbers made it an ideal city car and it was manufactured by various entities from 1953-1962.  This 1958 BMW Isetta has seen some customization and needs additional work but is for bidding at $3500 on ebay reserve-not-met, located in El Cajon, CA. 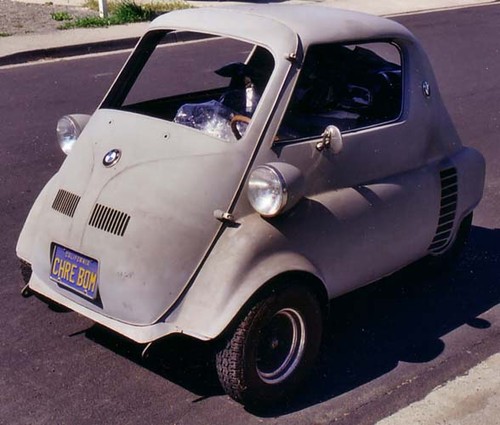 The Isetta has the unique status of being the highest production volume single cylinder automobile ever built. It is also a horrifically slow car with questionable reliability and the unquestionable ability to kill you in a simple fender-bender accident.  It would be unfair to call it a motorcycle with a two seats and a roof -because it is actually a scooter with two seats and a roof.  Every time you crawl out of the cool front hinged ‘door’ you will thank your lucky stars that you are still alive and have safely reached your destination. 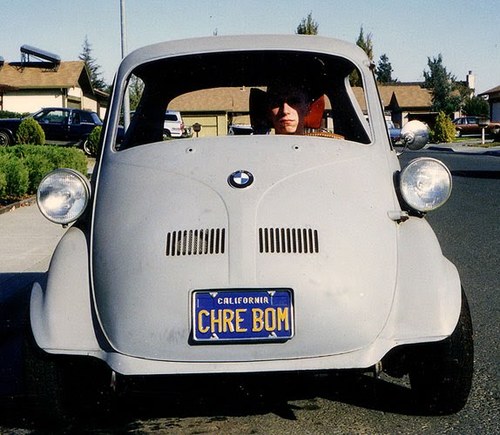 CHRE BOM (Cherry Bomb) reads the 1980-82 issue personalized California license plate – it’s either a reference to a type of muffler (not much of a performance upgrade on a single cylinder car) or the fact that the Isetta resembles a small fruit and is the bomb.  This Isetta will need some work – windows are missing, body is in primer and interior condition is not clearly described…expect the worse. 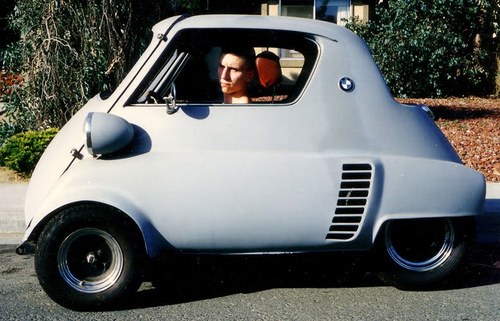 The Isetta was originally powered by a 298 cc (0.3 liter) single cylinder two-stroke putting out 13 horsepower and 13.6 ft-lbs of torque – giving the microcar a 0-60mph time of…well..infinity..because its maximum speed was 53 mph.  It is no surprise that the Isetta was the on-screen ride of Family Matters ‘star‘ Steve Urkel .  “Did I do That?” is what the engineers who designed this thing said after it was released to the public. This Isetta is missing its original engine and the current seller says that the car has been irreversibly modified to use a 4 cylinder Honda engine – probably a good thing if you are planning on turning it into a drift car – but bad for restoring and selling to the grey-haired, balding,  undeservedly-wealthy, nostalgia seekers at Barrett-Jackson auctions. 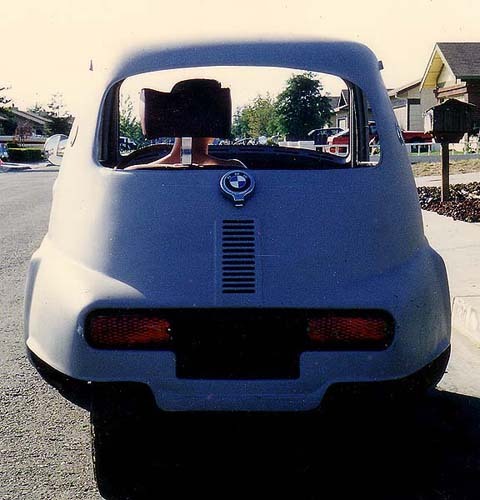 The pictures in the ad really look like they are from the 80s, not just because of the shirtless driver’s crew-cut, but also because of the photos’ graininess and vintage of cars in the background, but perhaps that is because El Cajon is a bit of a time-warp town.  This car is currently for sale at a very low price considering that a well preserved Isetta are being sold near $30k – but it needs a ton of work and has all kinds of questionable aesthetic and mechanical modifications.  Is this a diamond in the rough or just a rough piece of coal?

See another Iso for cheap?  email us here: tips@dailyturismo.com