The hot rod is one of the true unique American art forms that came out of the 20th century, and could be compared to other uniquely American creations such as the blues, jazz, hip-hop, and Prairie architecture. It would take an entire article to describe every subset and style of hot rod because of the looseness of the genre. Today’s featured car started as a 1927 Ford Model T (well, at least the body did) and was built into what you see here, a “Modified” roadster with no rear bodywork. This one is a Bonneville veteran and appears to be a so-called Traditional rod – don’t call it a Rat Rod! Check it out here on ebay, located in Layton, Utah, listed with no reserve and bidding near $5k. 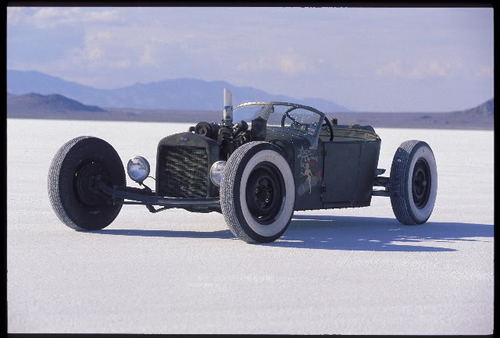 This narrow little hooligan is somewhat similar to early hot rods that were built in the 1940s and early ’50s. We presume it is a recent creation, but the builder used an early Ford parts list that reads the same today as it could have in 1953: the frame and grille are from a 1928-1931 Model A, the engine is a 1953 Flathead V8, the transmission is an unspecified 3-speed manual (most popular being from 1939), and the front & rear axle, brakes and wheels are all from a 1940 Ford car. 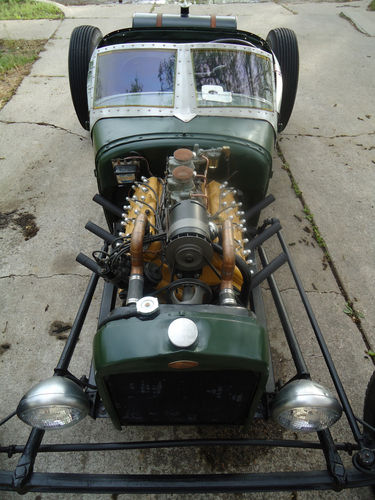 All of these parts come together to make something that far outperforms a stock Model T, both quantitatively and for entertainment value, and could be driven by anyone who knows how to work a clutch and manual gearbox (unlike the original Model T which uses esoteric controls that would dumbfound modern drivers). Even though this is much faster than a true T, and any other Ford built until the mid-’50s for that matter, it would be blown away by most high-dollar modern “street rods” or ubiquitous Small Block Chevy V8-powered fiberglass copies of the 1932 Ford roadster. Therein lies the point – this car, like other Traditional style hot rods being built today, was meant to emulate the cars from the beginning of the movement, when mechanically handy gearheads had a plentiful supply of cheap used Ford V8s and small, lightweight pre-WWII bodies to shoehorn them into. It was all about going fast then; it’s all about nostalgia now. We do see a nod to modernity with the rectangular boxed tubing “K-member” brace visible in the floor though, which stiffens the noodly Model A frame substantially. A distinct pie in the face of modernity and safety however is the exposed driveshaft running directly between the bomber-style seats on its way from the transmission to the rear differential. Don’t use that sucker as an armrest unless the car is at a dead stop! 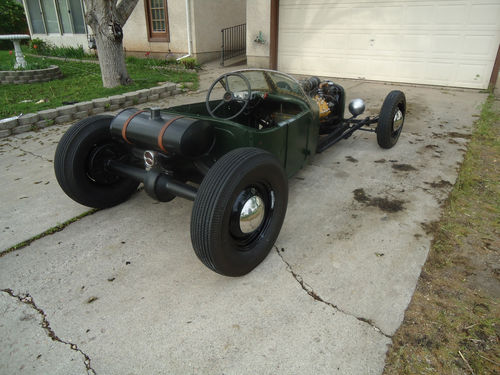 The “T-Modified” moniker refers to the body style seen here – a truncated touring car converted into a roadster (with no trunk), or alternatively a roadster pickup with a shortened frame and the bed removed. This one looks to have been made from a Model T touring car which was originally a 4-seater convertible. The rear seat area was removed and the back panel of the original body was moved forward, creating the cozy topless cab. You could look awesome but live dangerously simultaneously with the exposed gas tank sitting directly over the ’40 Ford ‘banjo’ solid rear axle – it would put the Pinto to shame for rearend crash fireball potential! But to harp on this point would be to overlook the fact that safety is nonexistent in a car like this – no rollcage, seat belts, side impact beams or any energy-absorbing crush structure is to be found, let alone airbags or soft interior surfaces. Our conclusion: just don’t crash. 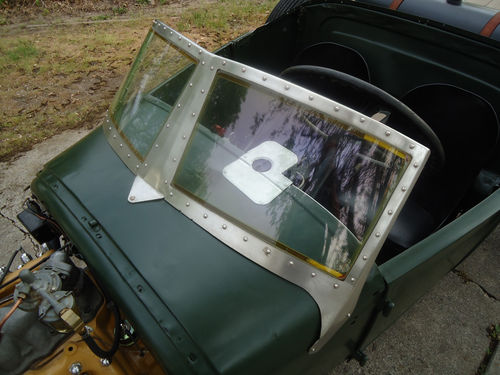 The windshield on this rod is a bespoke touch, reportedly crafted from 1/2-inch thick helicopter windscreens in a custom made stainless steel frame. It looks to be patterned after a Duvall cast windshield, as seen here perched on Doane Spencer’s ’32 roadster. It looks interesting yet familiar, and we think it makes the car. We  prefer the earlier dark blue & black color scheme for this rod as shown in the Bonneville Salt Flats pictures provided, vs. the dark green / yellow combination that it wears today. 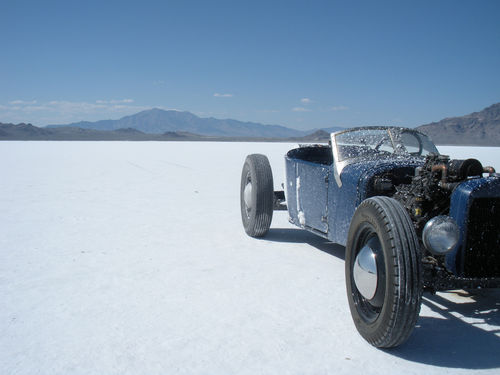 Regardless of the details, this little T Modified looks like a fantastic way to get salt & dirt thrown in your eyes to the roar of a Flathead V8. And it’s cheap! We’ve seen similar cars built in the traditional style change hands around $20k, so if bidding stays anywhere in DT-budget range, this should be a great value for the new owner. You’ll need some extra change to replace those skinny bias ply tires after all of the mandatory burnouts your friends will require of you.