The MX-3 was a small sporty hatch from Mazda launched in 1991 as a competitor to the Honda CRX and Volkswagen GTi.  The MX-3 borrowed many of its components from the 6th gen Familia/323/Protege platform but added hatchback usability and sporty looks.  The real kicker was the addition of an optional high revving (7,800 rpm) 1.8 liter V6 that put the MX-3 into a category of its own.  Find this 1992 Mazda MX-3 V6 offered for $2,850 via racingjunk.  Tip from Jim Z. 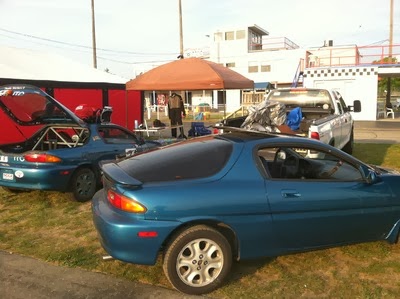 This Mazda MX-3 is powered by the K8 series…a 1.8 liter V6.  At first glance it seems like a mistake because it sounds like an engine configuration from a
60s Dino, but it was just another example of Mazda thinking outside of the box in the late 80s.  It is a real shame they never shoved this engine into the MX-5 because it would have made for a sweet ride.  This one has set of headers and a full exhaust setup that should sound wicked at a boil, but could diminish the usability for hauling your family around.  With 90k miles you may think this one is well preserved, but be aware that a significant proportion of those miles could have been spent at wide-open-throttle around an autocross track.  That isn’t to say you shouldn’t buy a car that has been tracked, but the focus on miles is less important and things like compression ratio and clutch life should be scrutinized thoroughly.  Often, a track car has had all sorts of preemptive maintenance (track drivers don’t like things like old wheel bearings failing on them) done, but the real trick is to understand the sales price-to-condition ratio.

Saw this whilst looking for shitty Miatas on Racing Junk. It’s a cool site btw, lots of half-finished race projects that would completely ruin your life upon purchase.