I’ve owned and driven some slow cars in my time.  A W123 Mercedes-Benz 240 diesel with the OM616 inline-4 non-turbo engine was slow, but it felt like being launched from a cannon compared to the Mk 1 Rabbit that I owned a few years later.  The Rabbit couldn’t out drag a UPS truck from a stop, but somehow was a surprisingly fun experience.  It was like that time you went to one of those dreaded kids birthday parties and ended up in a game of kid-versus-adult dodge ball.  You didn’t expect anything other than a few hours of tedium, but ended up sweaty and bruised.  Find this 1979 Volkswagen Rabbit Mk 1 offered for $2,900 in Almeda, CA via craigslist.  Tip from FuelTruck.

The Volkswagen Golf was introduced in 1974 as a replacement to the 36
year old Beetle (Type 1) and sold like salty pretzels at Oktoberfest,
with over 6 million of the front-drive compacts leaving worldwide
factories through 2009.  The Rabbit (as it was called in the USA) was
designed by Giorgetto Giugiaro of ItalDesign – noted for his work on the
Alfa Giulia Sprint, Ferrari 250 GT, Maserati Bora and Isuzu Impulse..et
cetera. 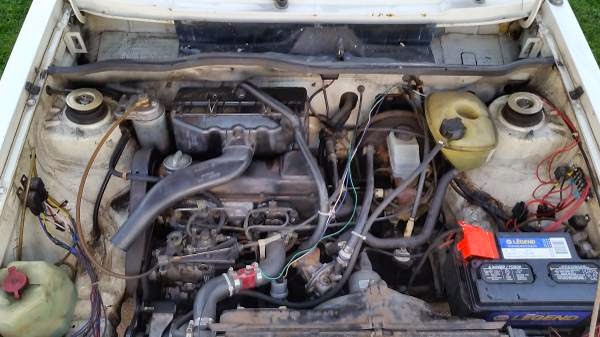 Under the hood of this Rabbit is a 1.6 liter inline-4 cylinder diesel
that puts out 54 horsepower.  Keeping up with the normal flow of leisurely weekday noon traffic (little old ladies on the way to the grocery store and distracted teens snap-chatting pics of their frank ‘n’ beans to friends…etc) requires clutch
dumping starts and the throttle pedal can be treated as a binary
switch.  Oddly enough it wasn’t a penalty box like driving a rental car
with a CVT or a Prius…since the 4-speed gearbox and unassisted manual rack-and-pinion steering keeps you busy. 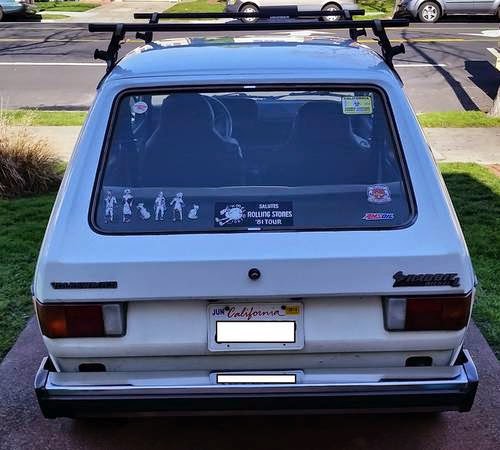 What is going on with that sticker family.  Is that the gimp?  See a slower car for sale? tips@dailyturismo.com