This next feature comes from the pen of Gianni as part of Daily Turismo’s 4-Stroke Good, 2-Stroke Better campaign to save the 2-strokes: The Kabushiki-gaisha Burijisuton or Bridgestone Corporation started in Japan in 1930 as a tire manufacturer with the goal of manufacturing tires based solely on Japanese technology in order to avoid dependence on European and North American technology.  During WW2 it was placed under military control and all tire manufacturing was directed toward military use.  The country and company was devastated after the war and began manufacturing motorcycles and bicycles in addition to tires.  In 1967, Bridgestone introduced the 350 GTR two stroke.  It was considered as one of the most sophisticated Japanese motorcycles of the 60’s and cost as much as a Triumph Bonneville.  Production ended in 1971 with only a small number of sales over the 4 years of manufacture.  Rumors persist that Honda and the other large Japanese bike manufacturers pressured Bridgestone to get out of motorcycle construction and concentrate on tires.  Find this 1970 Bridgestone 350 GTR on Craigslist in Des Moines, WA (not IA) for $2,100. 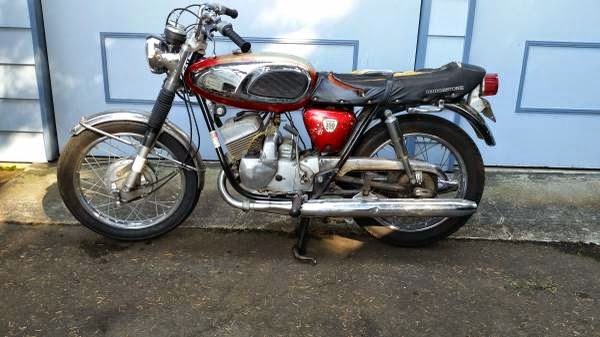 This 350 GTR looks to be in original, if a bit taty condition.  The ad makes mention of new carbs and lots of two stroke power.  The 350 GTR’s 345cc parallel twin engine used a rotary disc-valve induction system, versus the simple piston-port design being used by rivals at Kawasaki and Yamaha.  Bridgestone claimed peak horsepower of 37hp @ 7,500rpm. 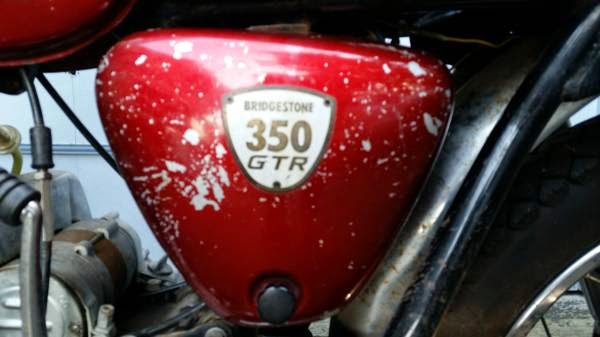 The bike still sports it original paint with a good bit of patina.  Note the kick starter in the photo above.  It is on the left vs. convention, which was to put it on the right.  Another area where the Bridgestone swam against the tide was its 6-speed transmission.  Neutral was on top, instead of between 1st and 2nd gear.  The seat needs a recovering and the bike comes with a clean title and original 1970 license plate.  In WA you can register it as a classic and continue to run a period plate. 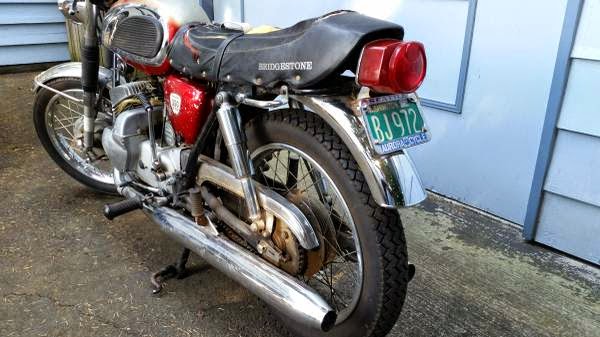 See another two-smoke to fumigate your neighborhood with?  Send it in:  tips@dailyturismo.com