The US Postal Service has no official creed or motto, but inscribed on the  James A. Farley Post Office Building in Midtown Manhattan is the following excerpt from Herodotus’ Histories in reference to the Persian mounted postal deliverymen: Neither snow nor rain nor heat nor gloom of night stays these couriers from the swift completion of their appointed rounds.  Unfortunately the unofficial motto makes no mention of death and dismemberment from the notoriously hazardous 3-wheeled Mailster that USPS employees had to drive in the 50’s/60’s across this great nation.  Experience it for yourself by buying this 1966 Westcoaster Mailster offered for $1,900 in Baldwin Park, CA via craigslist. 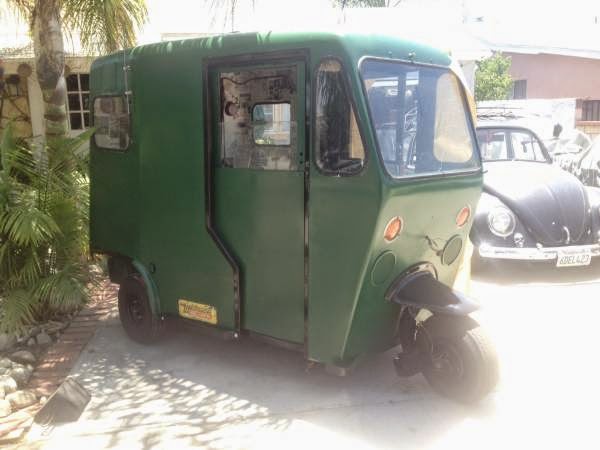 The US Postal Office was created in 1775 by decree of the 2nd Continental Congress, but folks needed to pick up their mail at the local post office.  It wasn’t until 1864 that folks living in large cities got free box-to-door delivery services and by the mid 20th century the old system of loading up a mailman with his trusty bag of envelopes was out of date.  Enter the sketchy 3-wheeled enclosed scooter in the above photograph.  At least 3 different companies were responsible for building the 2-stroke powered 7.5 horsepower Mailsters and thankfully they were replaced with bigger mail delivery vehicles by the 1970s.

However, if you really want to experience what it is like to drive a motorized rickshaw (aka Tuk Tuk) this side of the Indian subcontinent, this is about as close as you’ll get.