We are always amused when car sellers claim that their automotive relics were in fact owned by a celebrity at some point, or carried a celebrity’s sister to the hair salon one time, or are in fact a front-wheel drive A-body Chevy Celebrity (run!). But today we’ve stumbled across an automotive brush with fame that will be far more rewarding to own than Justin Bieber’s Axe body spray infested CTS-V or Sarah Michelle Gellar’s cheap but boring Chrysler LeBaron. This ‘restored’ 1958 Volkswagen Beetle is claimed to have been owned by none other than Journey frontman Steve Perry, and it can be yours for the not-so-low price of $18,900 including an autographed LP. Find it here on craigslist in San Rafael, CA (big thanks to tip from DT regular Kaibeezy T). 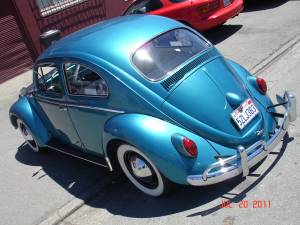 This bug does look pretty sharp in the small low-res images provided, and being a ’58 it was the first year of the rectangular rear window (replacing the smaller & more stylish oval window in the name of rearward visibility). The ’58s had a lot of one-year only features that make them interesting when compared to later ’60s beetles that look identical to the casual observer. This one seems to be fairly complete, presentable, and clean. 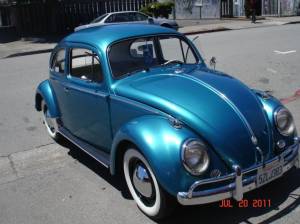 The seller claims that Steve “The Voice” Perry had the car “completely restored and gave it to his girlfriend.” We aren’t doubting the validity of the claim, although any interested buyers should do their research before paying a premium for the back story. However we’d use the term “restored” a bit loosely here; this is more of a resto-mod, as metallic teal was not a factory offered VW color in ’58. All to often in the aircooled VW world, would-be restorers take liberties when fixing up these cars and the end result is a mish-mash of parts that rob the “restored” car of a lot of its original charm. But hey, any way you want it – that’s the way you need it – so paint it whatever color you want! 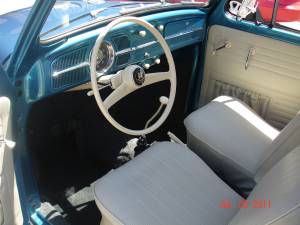 Steve’s girlfriend’s former ride does appear to have the correct “bat wing” steering wheel and fuel gauge-less dash, making for exciting drives near the end of the 10-gallon tank. When the lights go down in this city, you’d better carry a cell phone and a AAA membership card to get yourself towed back home when you find out your fuel reserve is smaller than you’d thought. 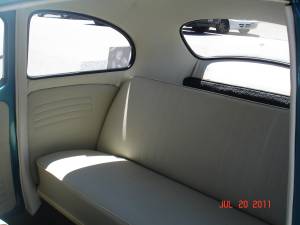 In summary we’d get this beetle checked out by a knowledgeable VW-phile to make sure the sins don’t go deeper than a custom color, whitewall tires and catalog vinyl interior. If the bodywork and mechanicals are solid, it may not be a bad choice for someone looking for a bug with a back story…just cruise down the highway and don’t stop believin’ that Perry used to own it! If you do buy this car though, word of warning: don’t let Randy Jackson sit in it or he will constantly name-drop Steve Perry and remind you that he played bass in Journey. Yo dawg, we know! But you can console yourself with the fact that a rebuilt VW is more than the sum of its parts, in fact it’s more than a feeling….no wait, that was Boston.