Back in the 1970s when DT contributor Hunsbloger dressed like Kurt Russell (from the movie Used Cars?) he drove and sold a number of interesting used cars.  Hunsbloger reports that Pontiac Can-Ams were a tough car to sell at the time because they were an
ultra niche..for Pontiac.  They were essentially the same idea as the GTO, but without the cachet of the name and plagued by
Pontiac’s bad decision to drop the GTO.  Find this 1977 Pontiac Can Am for sale in Lincoln, NE for $22,000 via craigslist.  Thanks to tip from Andy L. Back in the day, the Pontiac GTO started out as a Tempest/LeMans bodied car
(5-seater) which they added an engine to and got the.. GTO.
However, in ’74 they switched to the Chevy Nova body which Pontiac
called the Ventura, which was the absolute worst swan song GTO.
So … realizing they were better off with the LeMans body they
had to name it something different, butt…(misspelling
intended)… they had already played that card with the Pontiac
GrandAm starting in ’73 (Big Block GrandAms with the slapstick
GM auto were pretty quick in their time). 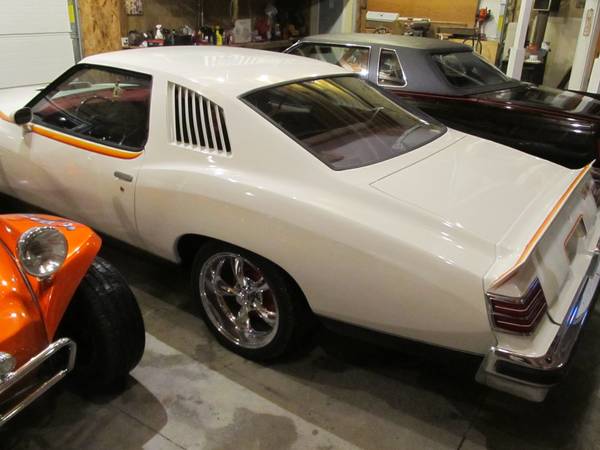 Problem was, the buyers in the market remembered the Original GTO
very fondly, and some respected how quick the Grand Am filled the
void, so back to the name badge bin and voila…Can Am!
The Can Am was essentially just a tarted up LeMans but it was the
original GTO formula, offered with their bigger motor and their SW
Airlines colored stripes (oops…make that PSA for the correct time
period).  At the time CanAms seemed decent for a ’77 but their lack of color
choice left them as a love it or hate it car. Cameo White was the only option. The 1977 Can Am is powered by a tarted up version of the Pontiac 400 cubic inch (6.6 liter W72 T/A) V8 that made 200 horsepower when new.  Expect 0-60mph in about 10 seconds. 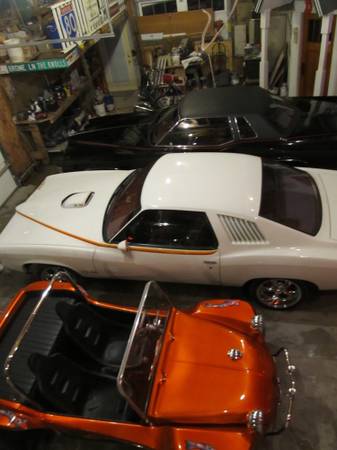 There was yet another problem for Pontiac Marketing when the Can
Am went on sale; they were also still selling the Grand Prix
which was a bigger (5) seater but had a longer reputation because
they offered it as a J, SJ and by 1977 an LJ  (Plain
Jane, Sport Jane and Luxury Jane).  Same engines and transmissions
but slightly heavier car.  Also, one could order the Grand Prix
with the Hurst T-Tops which kept them popular, but the T-Top wasn’t available in a Can Am.

Internet legend states that the mold to produce the fiberglass rear spoiler broke 6 months into production and the Pontiac upper management that was already spooked about cannibalizing sales from the Grand Prix, so they decided to can the Can Am with just about 1300 cars produced by that time.