The FD generation Mazda  RX-7 was built from 1991-2002 and is in my opinion the best looking of all Mazda vehicles.  Some are turned off by its amoeba/jelly bean styling, but personally, I think it kicks the butt of any 90s Japanese supercar from an aesthetics perspective.  Performance was good too. While reliability is the only real blemish on the FD’s report card, you can find low-mile examples that just need regular maintenance for years of happy drifting driving.  Now…you’ve got $15k burning a hole in your pocket; do you want your FD bone stock or LS1’d?  Tips and feature suggestion from Rene C. 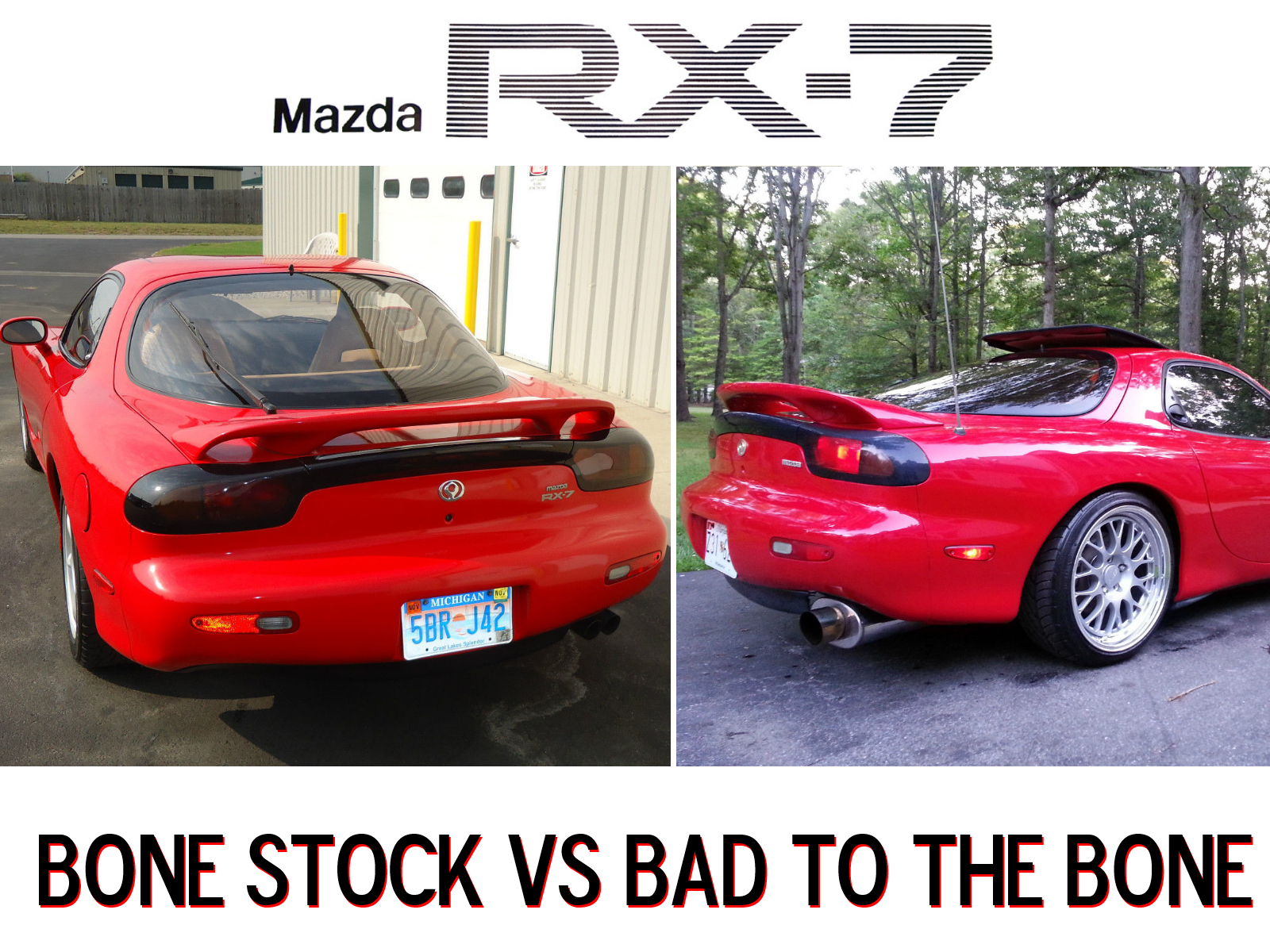 The curvy Japanese styling, a front mid-ships layout and a
turbocharged Wankel rotary engine is a fantastic combination,
except for the horrible reliability of a rotary multiplied by
the abysmal record of a 90’s turbocharger.  If you want something original, your best bet is to find an extremely low mile example or something with a rebuilt engine.  The costs of rebuilding the original 2-rotor has led many owners to drop in something from the Chevrolet small block V8 family — for an upgrade in power/durability at the expense of character.  Maybe.  A V8 powered RX-7 will certainly have some character. 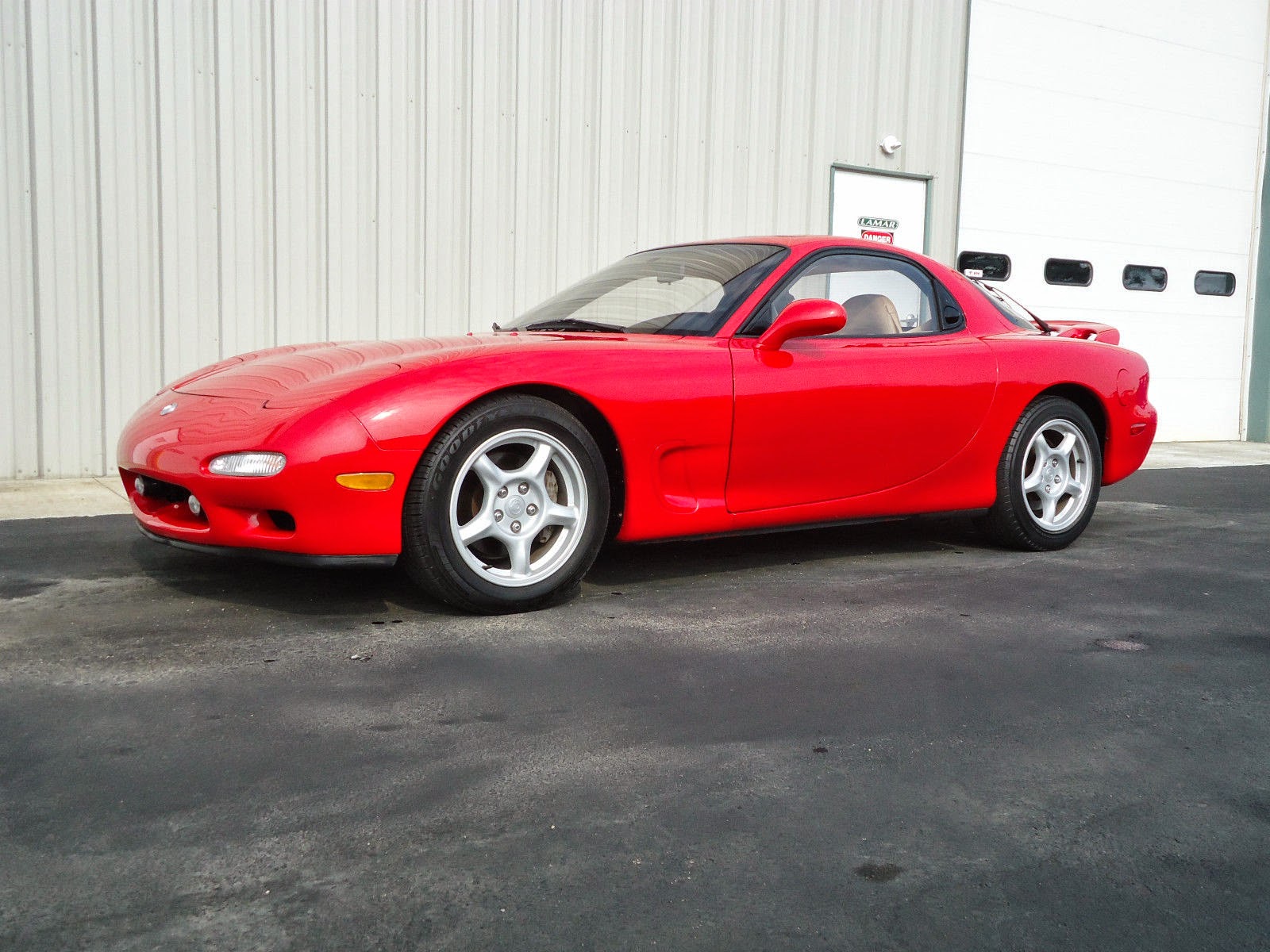 currently bidding for  $15,000 on ebay, located in Traverse City, MI with 3 days to go. The red beast looks minty clean, original, driven by a little old lady (seriously, the seller says it was:
purchased new in Lakeland, Florida back in 1993 by a young lady who
loved her with all of her heart. She drove it regularly short distances
and always kept it stored in the garage). The odometer reads 35k miles and it looks believable since there are no door dings, bumper bashes or illest stickers on it. 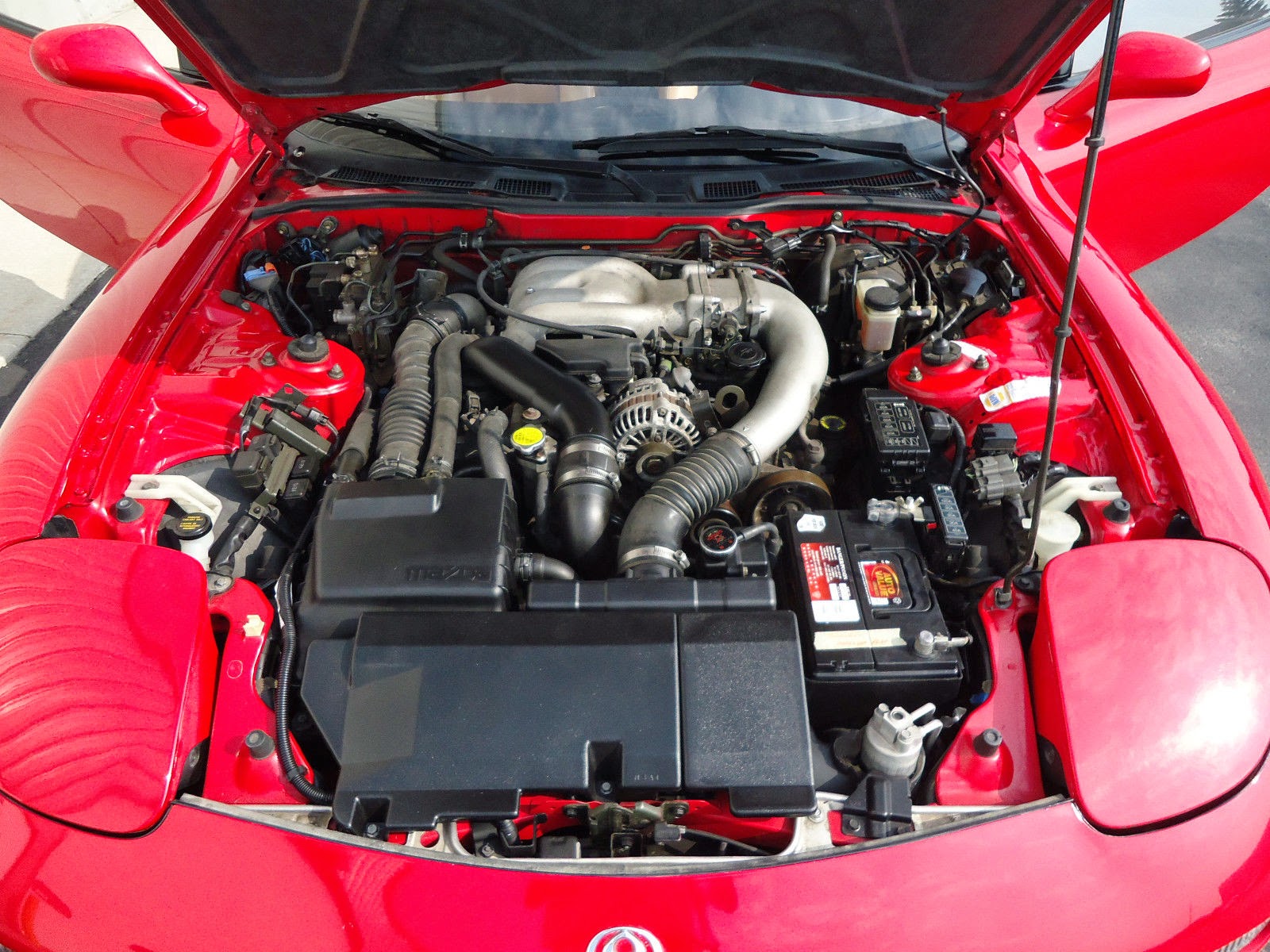 Under the hood is 13B-REW twin-turbocharged tri twin-rotor, which is rated at 252 horsepower and 217 ft-lbs of torque when mated to the 4-speed automatic in the Touring version of the FD.  The inclusion of the dreaded slushbox will probably deter many buyers, but for the few who just want to putt around, the bidding shouldn’t get too high. 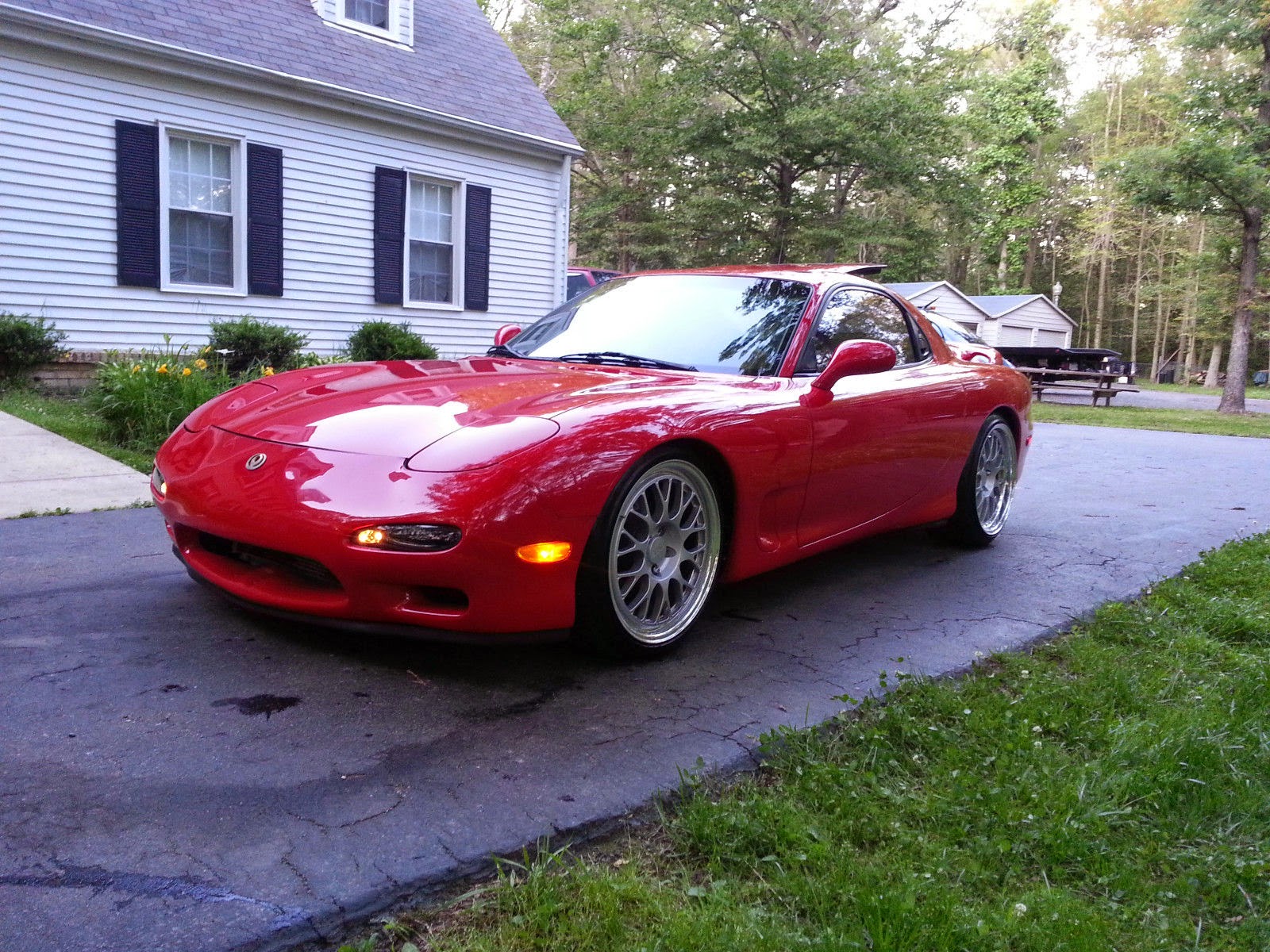 offered for $17,500 buy-it-now or best offer on ebay, located in Bryantown, MD with 4 days to go.  Not only does this one look lowered, but it rides on some 18″ Fiske Fikse alloys, and has one of the worlds biggest fart can mufflers poking out from the rear bumper. 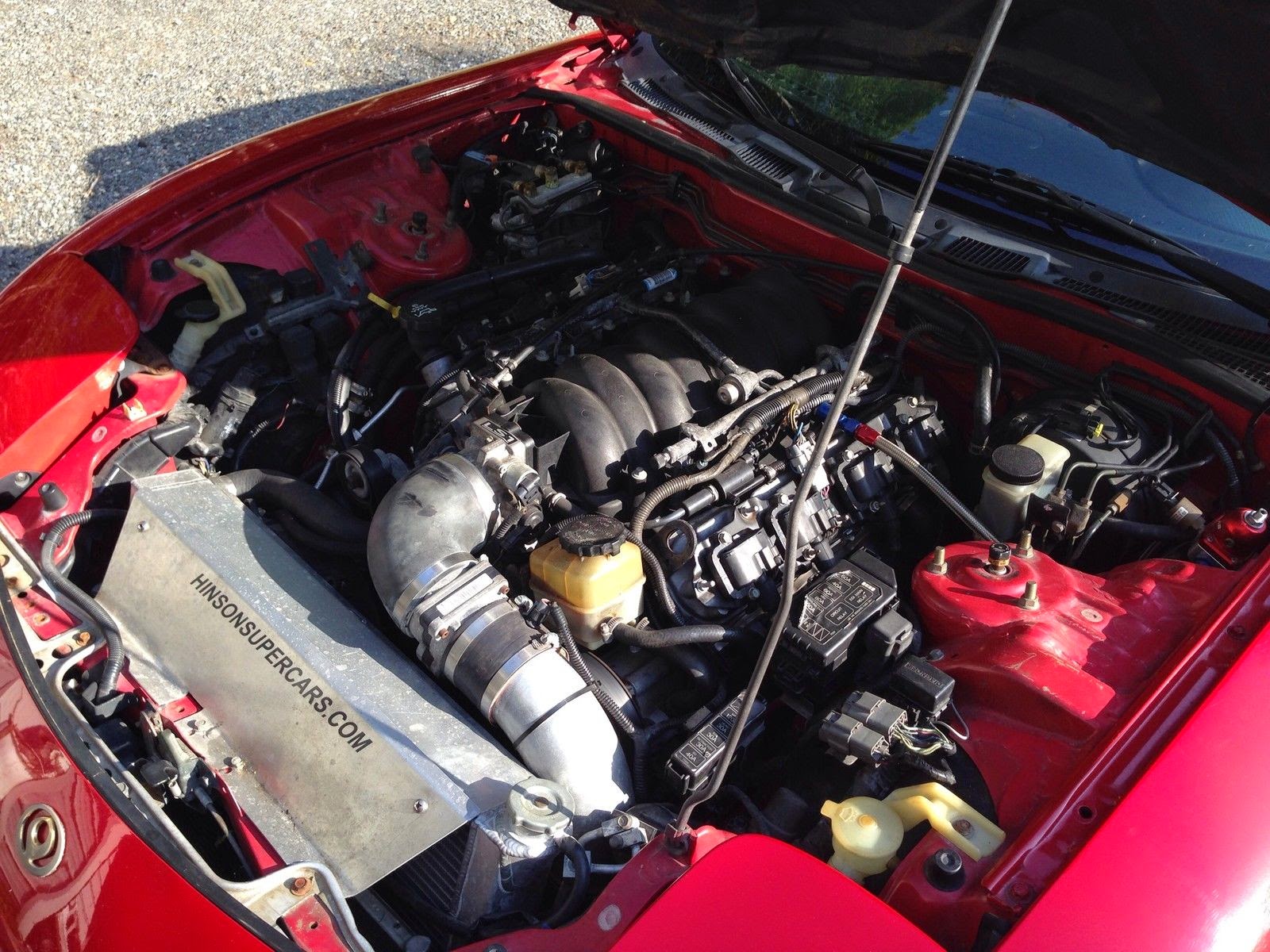 This modified FD also started life as a touring model with the 4-speed gearbox,
but sometime around the 15k mile range, the original Wankel gave up the
ghost and an LS1 from a 2004 GTO was swapped into it.  The seller has bumped up the go factor by bolting in some aftermarket parts and claims the car was dyno’d at a healthy 363 hp and 375 ft-lbs to the pavement.

If it was my money…I think I’d take the LS1 version, but only because of the clutch pedal — a low mile manual for the same money would be hard to pass up.  What would you pick?  Comments below.

See another FD worth a feature? tips@dailyturismo.com

DTO: You Spin Me Right Round: 1969 NSU Ro 80 Mid Week Match-Up: Pick A Car For A European Assignment