We’re in the middle of Weekly Haulrismo Week, the not-so-elegantly-named DT theme that explores cool, interesting, and cheap vehicles to use for hauling all of that holiday debris that seems to accumulate this time of year. You’re already draining your bank account buying stuff for other people, so why not indulge a bit and get that classic workhorse you’ve been fantasizing about? After Monday’s clean old “Mustard and Mayo” Suburban, today we’re shifting gears (with a long, spindly lever that feels like it’s stirring a box of rocks) and taking a look at a Ford pickup. The 5th-generation of F-Series trucks were built from 1967-1972 in the US (and up until 1992 in Brazil!) and represent great value today – clean vintage styling, brawn, simplicity, able to be fixed with a pocket knife and a mallet, and reasonably priced. Take a look at this restored ’70 F-100 “Ranger” 4×4 for sale in Chula Vista, CA. It’s on ebay bidding near $2k currently, reserve not met, and Buy it Now at $13.9k. We think a final sale price somewhere near $10k would be perfectly reasonable for a gussied-up workhorse like this.

*UPDATE: this truck is listed locally here on San Diego craigslist for $12,900 or “reasonable offers” 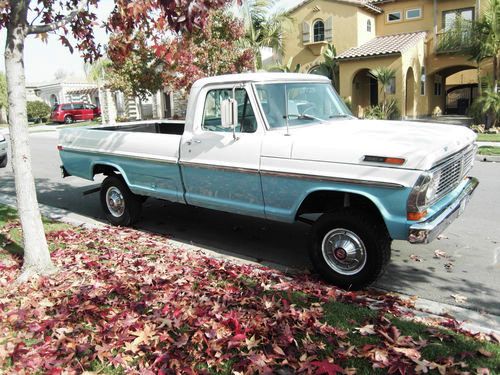 These big Johnson / Nixon era Ford pickups are much more cleanly styled than the Gerald Ford era Fords that came afterwards, the similar but uglier 6th-generation F-Series built from ’73 to ’79 (that’s right…we said “big Johnson” for the 2nd time this week). The earlier 5th-gen trucks have just the right amount of kitschy chrome and fake wood ornamentation combined with a very linear but subtly rounded boxy pickup profile. One of these trucks is on our short list of classic pickups to have someday. 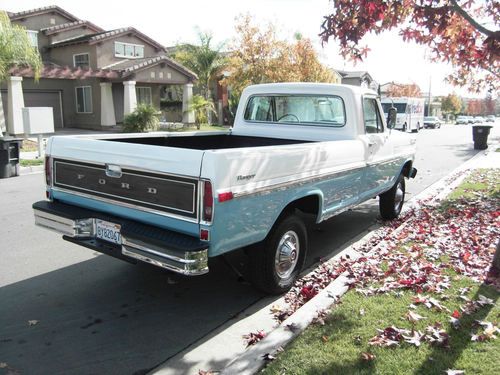 This one looks great in its white over blue two-tone paint job, recently applied according to the seller. It looks nice but fairly out of place on the wide, new streets of a modern Southern California cookie-cutter housing development. We think it would look more natural on a vineyard in Sonoma county, or a ranch in the hill country of Texas…but that’s just like, our opinion, man. The red autumn leaves in the images provided at least make a nice foreground setting. 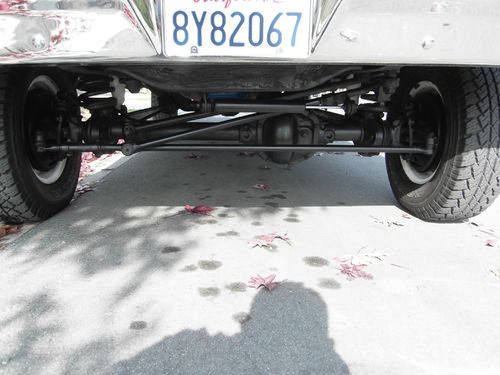 1970 was a time before every soccer mom and accountant thought they needed four wheel drive in their pickup trucks, so this F-100 Ranger is a bit more rare than its common 2WD stablemates. The seller provides the image above of the front axle, proving that it’s indeed got power going to the front wheels. The solid / live axle setup used to be standard for any 4WD pickup or SUV, but survives in production today on a scant few such as the Jeep Wrangler and SuperDuty Ford pickups. An independent front suspension is better in the day-to-day world of street and highway driving, but for maximum articulation off road nothing beats the old solid axle. It’s nice to see Ford was using coil springs and linkage bars back in ’70, saving weight and improving ride & handling vs. the more agricultural leaf spring setup (as used on the rear of this and almost every other production pickup truck save the recent Ram 1500). 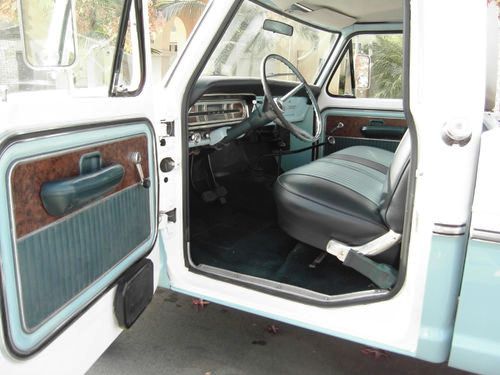 The interior of this F-100 is just as minty as the exterior and has also recently been refurbished. The blue / black / fake wood color scheme looks classier than one might expect, especially because the vertically pleated door panels match the pattern on the wide bench seat nicely. The three-spoke steering wheel is deeply dished for some modicum of safety and energy absorption, but that spearlike steering column will still pose a threat during a serious frontal collision. Our advice when driving older deathtrap vehicles designed before crash testing and safety standards: it’s best not to think about that – and just don’t crash! Shifting the old manual transmission will at least take your mind off of impending doom at every hint of brake failure. 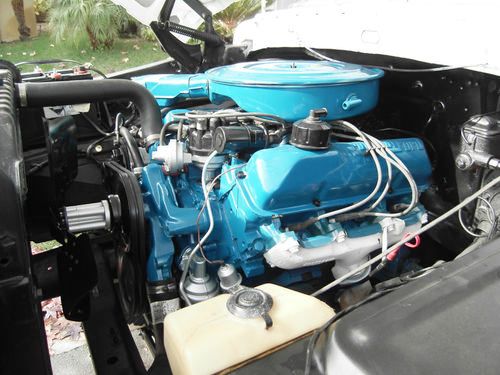 The old FE-series V8 looks proud and clean under the hood. It has obviously been pulled apart recently – it’s got a fresh coat of Ford Blue but we don’t see any overspray on parts that shouldn’t be blue, indicating this wasn’t just a quick spray-bomb job that so many sellers do to spruce up an engine bay before a sale. This FE is the 360 (5.9 liter) version, the second-to-largest V8 available in these trucks. It would only put out 215 hp in stock trim, brand new…but there’s a chance this one runs like new given the attention to detail in the aesthetic department. We’d definitely suggest a pre-purchase mechanical inspection and test drive to make sure most of those 215 ponies haven’t wandered out of their cast iron stable.

Bottom line – we think this would be a super nice Weekly Haulrismo for those of you vintage Ford and/or pickup fans out there.