15k: The Frank And The Fastidious: 1993 Toyota Supra MkIV NA-Slushbox

The 6th installment of the Fast and the Furious franchise was released this past weekend, and while the first will be fondly remembered as an automotive themed remake of Point Break (complete with Paul Walker’s stunningly accurate rendition of the Keanu Reeves “coma” style of acting) this latest version looks more like a crash fest of super cars and tanks.  FF6 is more an automotive themed version of Saving Private Ryan.  Regardless, the star of the first FF movie was a MkIV Supra, so we’ve been on the lookout for stock, cheap MkIV Twin-Turbo 6-speed Supras…and they don’t exist.  What we did find is that 1993 Toyota Supra NA-slushbox for sale in Oahu, HI for $13,000 via craigslist.  We also would like to introduce DT’s newest feature: The Frank And The Fastidious; the thinking man’s version of the cars from the FF movies – send us your tips! 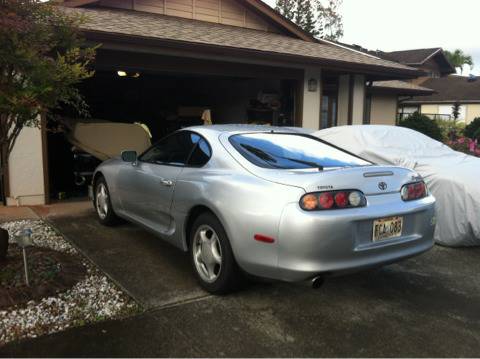 We had originally received a tip for a nice stock Supra from DT reader Jeffrey L, but we waited too long and that one disappeared from the interwebs.  This one is advertised with only one photo and limited information, but it does look the part of a Stock MkIV Supra and a stock version of Brian Earl Spilner O’Conner’s pimped out 2JZ-GTE equipped Supra.  The non-turbo Supra is powered by a 3.0 liter 222 horsepower 2JZ-GT inline-6 and mated to an automatic transmission…it won’t be fast or furious, but it’ll get comparatively great fuel economy and be a good reliable car for commuting….all the while looking sporty.  Sort of a classic ’90s Japanese version of a Pontiac.

We are looking for more classic Fast & Furious Frank & Fastidious cars to feature – head over to the Fast and Furious wikia page for some inspiration and then hit craigslist and send us your tips!  tips@dailyturismo.com