Time to introduce a new feature to Daily Turismo: Volvo Thorsday! No, we didn’t forget to spell-check…that’s Thorsday, as in the Norse God of Strength and Fertility himself, for whom Thursday was named. Why Volvo? Because any super-strong hammer wielding Scandanavian deity appreciates seeing a
Göteborg-native Swede being featured on his “special day.” Thor demands sacrifice, and our first victim is the perfect chariot for the bearded Sire of Thunder: this clean, lowered, and alleged mostly original 1973 Volvo 1800ES being offered for $12,500 in Sherman Oaks, CA. 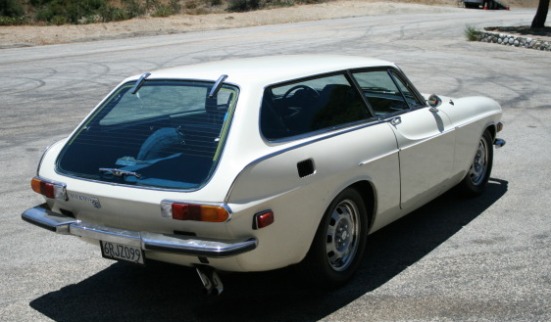 The 1800ES was known internally at Volvo as the “Beach Car,” and this one has a suitably maritime color scheme to match. It is a fairly rare model, only sold in 1972 & ’73 model years as a way to extend the life of the long-in-the-tooth 1800 coupe (originally known as the P1800, released in 1962). The funky looks can be polarizing – the Germans call this model Schneewittchensarg, which translates literally to “Snow White’s coffin.” We can’t help of think of Sid the ground sloth from Ice Age whenever we see the front end, but at least it’s a friendly face! Volvo management envisioned well-tanned and well-moneyed stylish California beachites loading up their boards and cruising the coast when they designed the “shooting brake” style 2-door mini wagon. 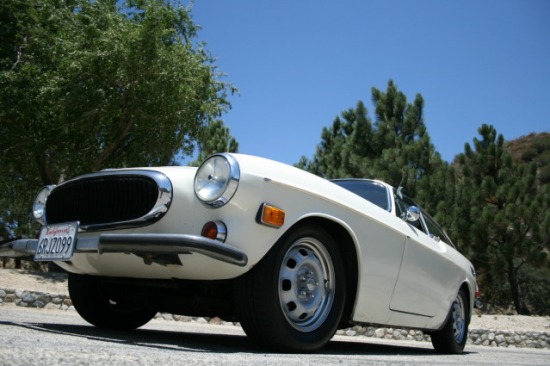 This one looks like it’s been spared from hauling much of anything, and is probably the current owner’s Sunday driver. It is nice enough to qualify for our Minty Clean badge, and with minimal maintenance could be used as a proper Daily Turismo. That’s not to say it’s a sports car – the suspension design, engine, and transmission all trace their roots back to Volvo’s agricultural yet curvy mainstream sedan, the Amazon (aka 122). But it does have sporting pretenses. You sit low in an 1800, and feel like you’re almost on the ground. Looking out over the classic twin-gauge instrument pods towards the front pontoon fenders, with manual steering and a rorty exhaust note from the pushrod four, you can almost convince yourself that you’re the main character in a British secret agent action film. Or maybe his sidekick. 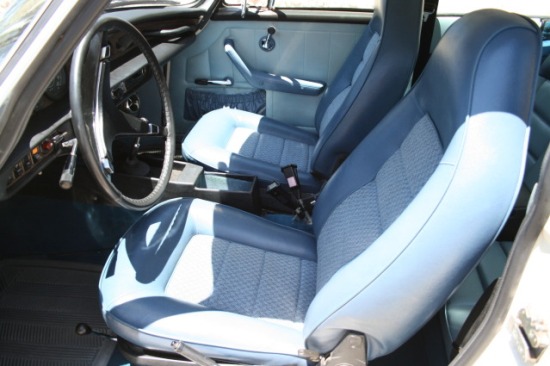 The seats and dash in the 1800ES evolved from the original early ’60s designs, but have a distinct ’70s flair about them. The addition of headrests make the seats a bit safer and they have a bit of bolstering unlike the early flat sofas. Woodgrain applique on the dash panels doesn’t quite mesh with the jet-age shape of the original design, but you get plenty of gauges to monitor, and a plethora of toggle switches to fiddle with. The 1800ES even has a center console, but it’s not big enough for both your iPhone and your Venti half-caff mocha latte – you’ll have to choose one. 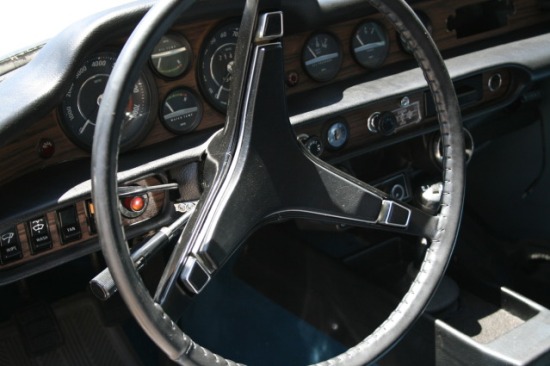 Wait, what are we saying here – scratch that last comment. The 1800ES is such a man’s car that the driver should naturally just be eating raw coffee grounds on his morning commute. There’s plenty of room for a baggie of fresh Arabica beans. This car is so masculine there’s even a 70’s-style love den in the back, complete with plush blue velour carpeting and mood lighting. You provide the Burt Bacharach tape and the lucky lady, this Volvo provides the memories. 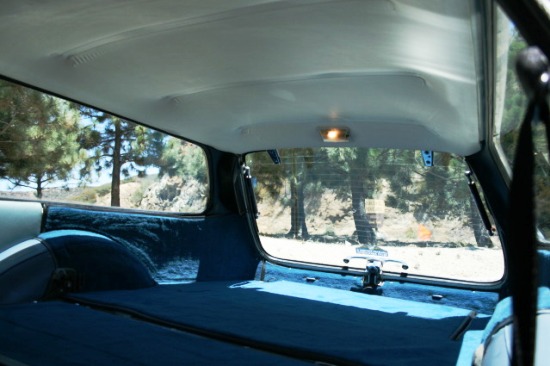 After that, pop the reverse-hinged hood to find the heart of the beast, the 112 hp / 115 lb-ft B20 pushrod 4-cylinder. This engine is quite the little tractor, providing much more entertainment value than one would expect given the specs. Being an ES, this 1800 got the Bosch D-Jet electronic fuel injection system which will save hours of “fettling” over a twin-SU-carbureted earlier B18 engine. From the beginning of coupe production, the 1800 was always an interesting international mish-mash…it was designed in Italy at Frua (by a Swedish guy), the earlier coupe bodies were pressed in Scotland, engines, transmissions and running gear were all Swedish, the electrics were a mixture of Bosch (German) and Lucas (ack! – British), and the afformentioned SU carburetors and Laycock deNormanville overdrive unit (hehe…he said Laycock) also hail from Blighty. 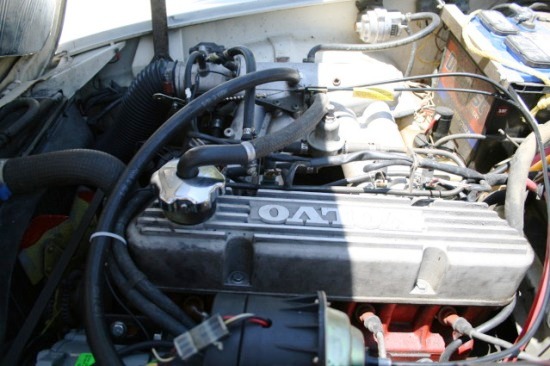 Judging by the meticulous maintenance records printed with a label maker and stuck on to the pedal box, the current owner might be a bit of a nutter – don’t say we didn’t warn you. Nevermind – there’s an “Aircraft Owners & Pilots Association” sticker on the all-glass rear hatch; maybe the OCD is a result of an airman’s mindset. Which is probably a plus, considering the A/C is claimed to be working, a ton of maintenance was performed recently, and the suspension and brakes were rebuilt with upgraded parts and the car was lowered slightly. Maybe it was done right! 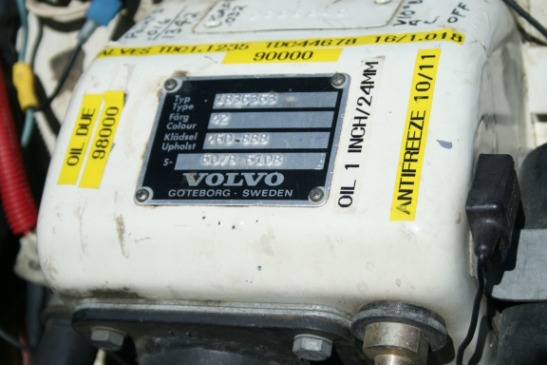 With only 94k miles claimed on the clock, this white wonder wagon has many, many hundreds of thousands left to go. Given the condition and the seller’s thoroughness we think it is very reasonable at $12.5k – we have seen equally nice cars offered much nearer to $20,000. 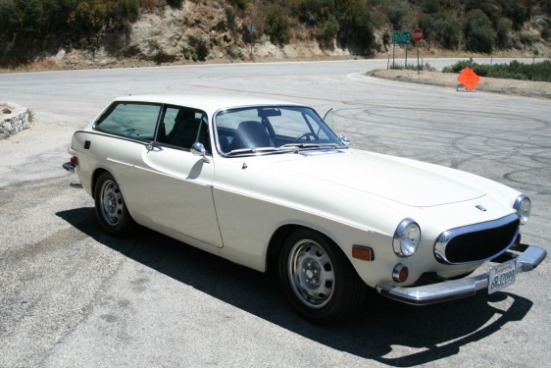 What do you think – would you feel like Thor if you put the hammer down in this quirky Swede? Or should we send it to Valhalla where the rest of the RWD Volvos go to die? Perhaps it should have never been born at all?


Think we should feature your own Norsemobile next Thorsday? email us here: tips@dailyturismo.com

**UPDATE 08/21/12: We have stumbled upon youtube videos from this car’s seller, from a week before we featured it. Check out the walk-around and test drive videos – the maintenance stickers under the hood gave it away as being the same car!**