Regular DT readers know the truth; Hunsbloger is a
Sportwagon/Vista Cruiser Fanboy.  He
keeps hoping someone will see these posts and buy him one these rides! Today’s
journey into Ebay is going to reveal a really great tribute car which shows How To Modify Your Car Without Scaring Off 90% Of Your Potential
Buyers, by comparing it to a severly modified ’64 Sportwagon featured
in DT on Nov 15th, and other vista roof wagons we compared in our DT Musings posted on Nov 16th.  We’ll tell this story in two Parts.  Part I is the car, Part II explains why this auction will work.

Buick never made a Gran Sport Wagon, but an Ebay seller named Mike in Aromas, CA armed with
enough knowledge about Buick’s version of the Muscle Car and an
appreciation for the Family Truckster tackled the task beautifully with this ultra sharp 1965 Gran Sport Tribute Wagon located in Aromas, CA currently bidding on ebay for $16,501 reserve-not-met with 2 days to go. 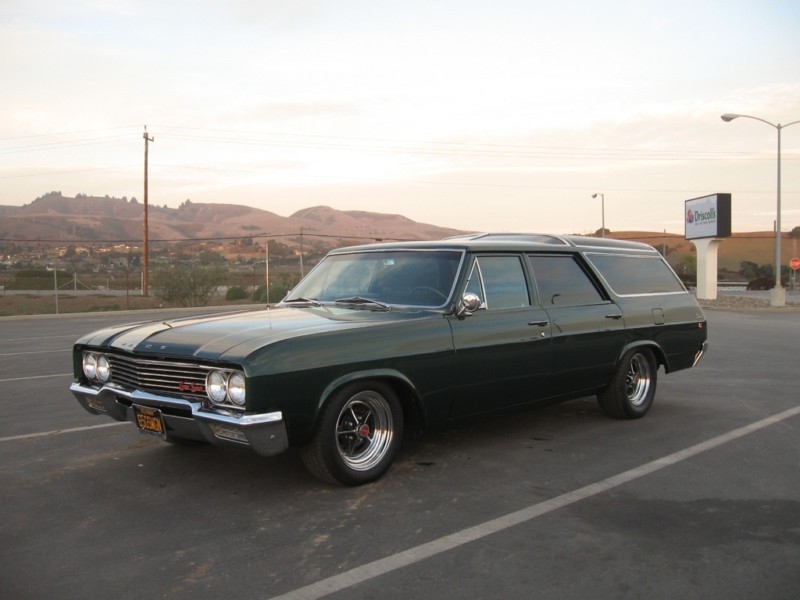 This car creates a solid first impression due to its high
quality paint, chrome, good panel fit and appropriate wheels. The rear window tint is a little dark
for our liking, but that can be quickly and easily removed.

Unlike other recent auctions for Sportswagons, this car has already attracted bids of $14K
and two days left to run towards Mike’s buy-it-now price of $22K, whereas the earlier cars shown by DT commanded
only $7,675 for the customized ’64 with its wild paint and big wheels, and the well
preserved bone stock ’65 drew no bids against a $6,100 asking price.  This car can be more favorably compared to the bone stock ’65 Olds Vista Cruiser which recently brought home the bacon by capturing 15 bids and closing at $15,100.

This car has even more appeal for those most familiar with Buicks because the seller/builder has carefully chosen the right elements from Sportswagons, Gran Sports and Buick Engines. I can tell you from just looking at this picture of the engine bay, that this car will even SOUND
right. 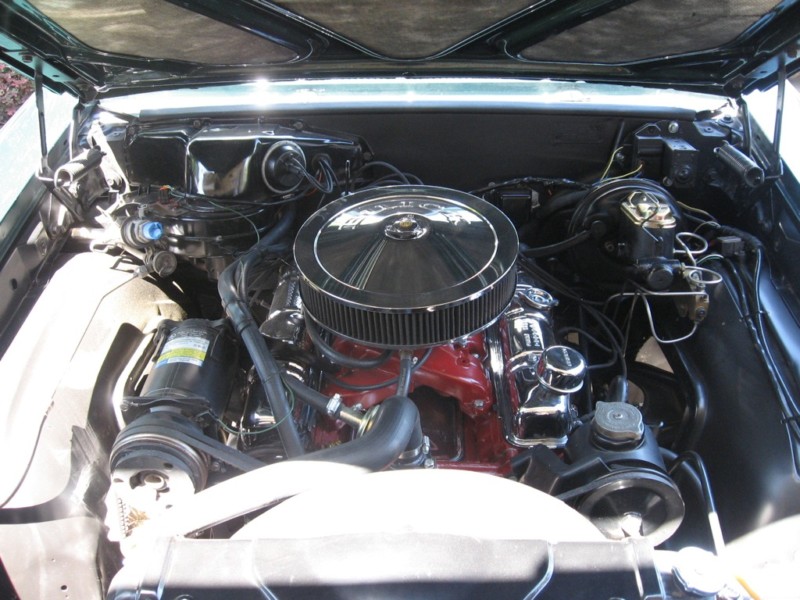 I’m making that prediction because it’s sporting an appropriate ’64 Buick 401 Nailhead that has been
internally massaged for more power and reliability.  This engine is shown in red (which may have been correct for a ’66 Gran Sport), but if it was apple-green and had an  air cleaner badged as a 445 Wildcat, it would
look like it left the factory in ’65 with this engine. Unlike other GM brands who badged their air cleaners with their cubic inch displacement, Buick badged their engines
with the highest number available to them; Torque!  This particular version of the 401 put out a ground
pounding 445 ft/lb of torque and a respectable 325 HP.  Given the list of engine mods is should be even more potent today than when new.  In addition to the chromed Nailhead valve covers, there is also an updated brake
booster/master cylinder.  All the parts have the proper finish indicating that this was a properly built and pampered car. 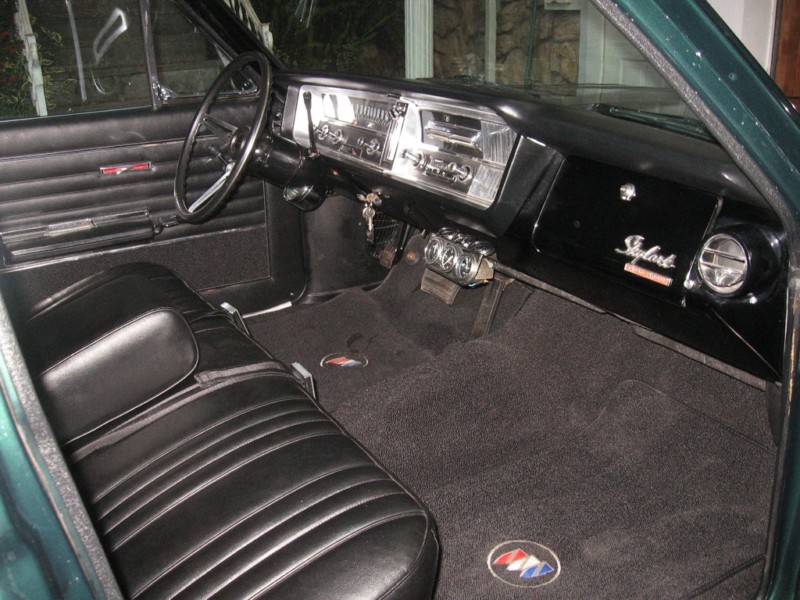 The freshly re-done
black interior really compliments the dark green exterior.  Mike points out that he’s installed a front bench with folding arm rest, sourced from
a ’66 Grand Sport (the wagons did not have folding arm rests).  The carpet is also new and hides a layer of
dynomat to keep the inside church quiet when the kids are fussing about in the
back seat.

It also looks like there’s
a knee-knocker tach mounted just below the left end of the dash.  Given the seller’s penchant for authenticity I would expect that to be a Buick tach, but the three gauge
cluster probably giving the basics of water/temp/volts in place of the idiot
lights looks pretty generic (and is the only thing I’ve seen in this car that should be deleted).  A newer style Buick
Steering wheel atop the original tilt column finishes out a well appointed, air conditioned interior. 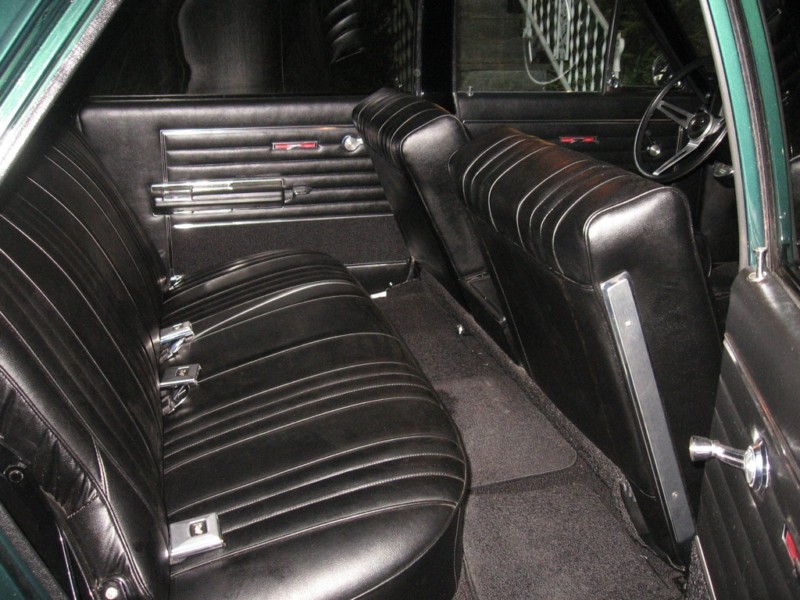 The back seat is shown only for the purpose of pointing out that the seller spent some serious money on quality and authenticity.  I’m not talking about the well finished seats, door cards or carpets, I’m talking  6 original equipment seat belts with the proper brushed metal receivers and Fisher Body logos.  Why am I pointing those out… because seat belts are something we all take for
granted, but in 1965 only the front seats came with seat belts. Trust me, I’ve been trying to find a set of decent
set of year-appropriate seat belts for my Sportwagon and they’re scarce.  The bigger point is that, because the builder took the time to find the right part (I’m guessing from a ’67-68 6-passenger GM sedan) the car looks like it was built with these.  Which speaks again to the seller’s/builder’s thoughtful execution.

Bottom line.. I don’t know if this will stretch to the seller’s $22K Buy-it-Now, but note what he’s using as a proper approach for bargaining.  If someone buys the car for the Buy-it-Now
price of $22K he is willing to throw in some items which sound like they are
either leftovers from the build or personal choice items.  Not a bad strategy.  The only distraction is the two pictures
which he has included of his ’66 Gran Sport, which displays a car of the same
color combination with a bucket seat interior with console.  Ad well done Sir!

Hopefully someone will gather up the strength to march into their kitchen, tell their wife that they’re not buying that mini-van, they’re opting to save money (and face) by buying a restored muscle-wagon!

PICTURES – This ad contains just the right number of pictures.  The car is centered in a wide open space, so there is nothing to distract.  By placing the car in an open area, the photographer can then walk around the car, just as a buyer would.

In fact, scrolling through the first 8 pictures, the car is presented as if it was on a turntable in front of you, slowly rotating in a clockwise fashion (If anyone has time to pop those into a .gif I’ll update with it).  There is one picture (not 5) of the engine bay, taken from the perspective of someone standing as if they have just opened the hood.

There is a single picture of the front seat area, another of the back seat.  Of particular concern on these Vista Roof cars is rust along the edges of the upper glass.  One shot tells the story, without any text about the car being well sealed.  One shot of the front and rear headliner to show its in good shape (and to show that he did not install the rear sun visors) and one shot of the cargo area to show that it’s been as well treated as the rest of the car.  The only distraction here is that he’s included the last two shots which were of his ’66 Gran Sport.

DESCRIPTION-The seller provides a very fact based walk through what has been done to the car.  He gets an opportunity to describe what he’s done, where the pieces are sourced from, invites anyone to come look at the car and most important: provides his name and phone number so that you can call him.

THE SELLER –  I’ve never seen this seller before, but in a couple of clicks, I can see that he’s got a solid 125 Feedbacks, which include… the aforementioned ’66 GranSport sold about 60-days ago and two more cars sold to glowing feedback in the 60-days before that.  The rest of the items are all bits/pieces of other cars.  He’s successfully sold cars on Ebay before and his feedback indicates that he accepted a best offer price on a previous listing.  He’s a pragmatist and understands that the first auction is usually the best auction unless there has been some significant change in the car, the market or the ad. 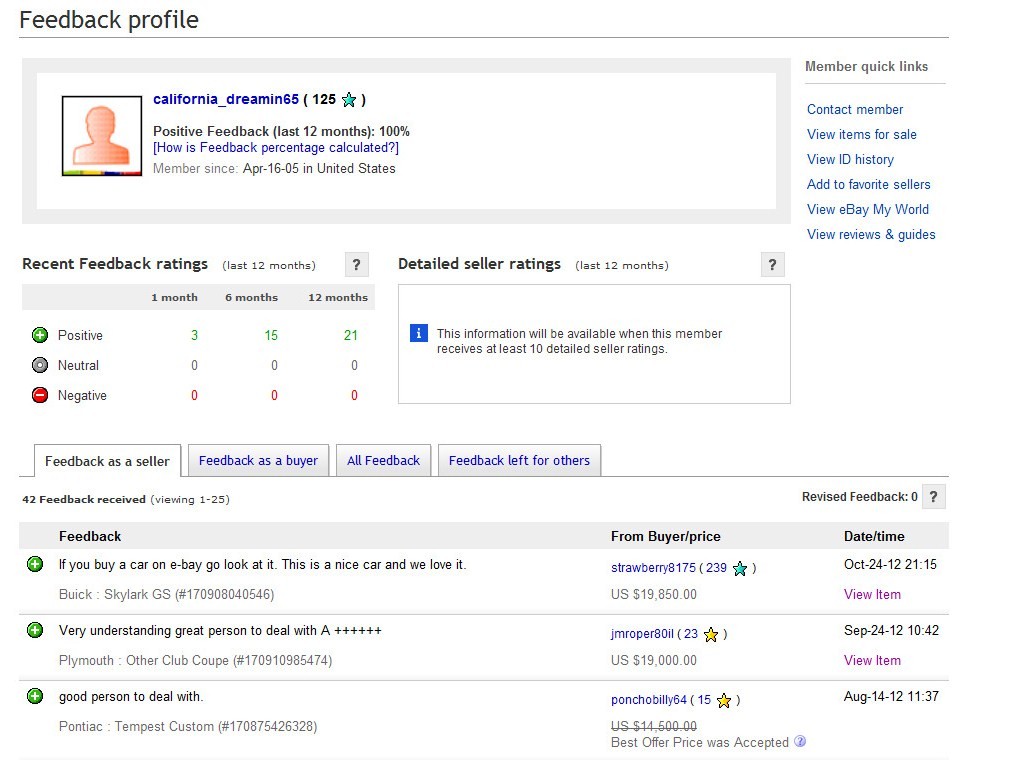 THE COMPETITION:  What has been sold in this market segment recently?  The recent sales serve as a predictor of price. Of the Vista Roof wagons we discussed in our musings section a few weeks ago. The really nice stock ’65 Olds brought the high money, the survivor color changed ’65 Buick brought no bids, and the customized Sportwagon with big block, big wheels, big colors, brought some bids but left the seller with nothing close to his investment covered.  This car is freshly restored, stock in appearance, Tribute rather than restomod, unique (GS Wagon were none were original), non-offensive color scheme and finally… impeccable looking build quality, components, pictures and ad.  I think of this car as better than original.  Really nice ’67 Sportwagons with good equipment will bring $12-16K (my appraisal), this one is already above that. 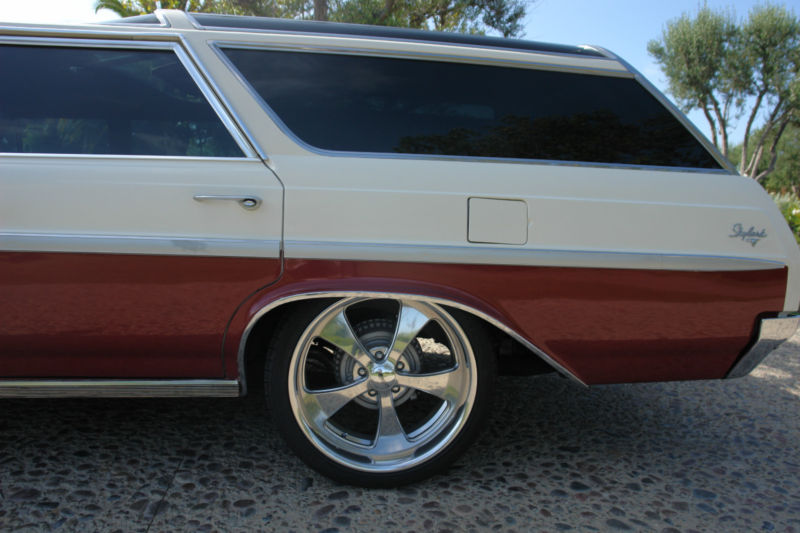 Car Flipper Rule # 2 – Never put something in your car that looks homemade.  While this sin is usually most frequently committed by owners of TR’s, Jags and VW’s who think they can grab a piece of plywood, a jigsaw and some walnut stain and make it look just as good, the ’64 Sportwagon failed that test too. 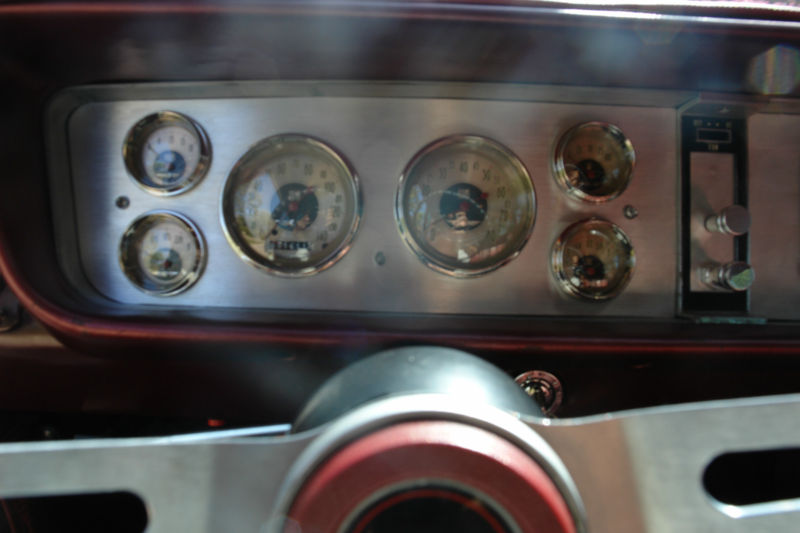 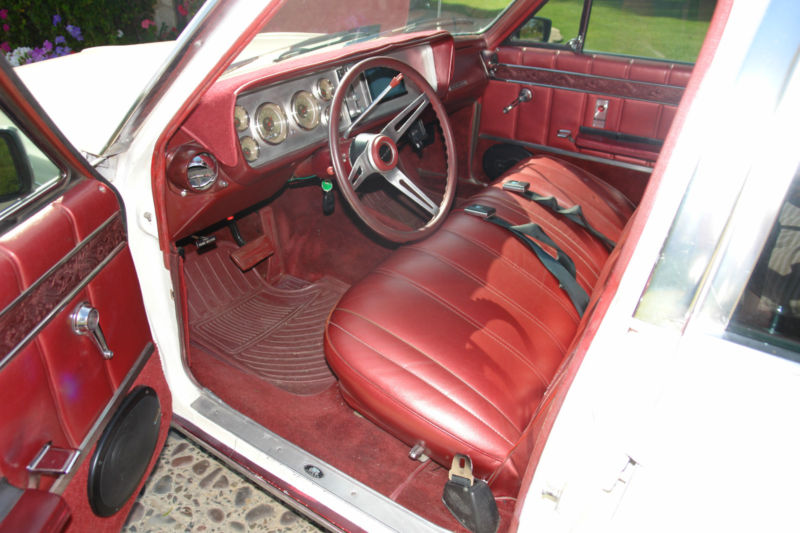 *This is one of the worst pictures I’ve seen on a ‘custom’ car… Ugly speakers, home-made dash, black seat belts on red seats, red late model steering wheel with black hub, brake and accelerator pedal are painted red to hide the missing rubber pads, carpets are filthy in a car that has a decent paint job.

CLOSING- Keep watching DT as we attempt to show you examples of the good, the bad, the indifferent and the ones that will induce you to grab the checkbook as fast as you can.

Got another comparison of the good-bad executions of the same them ..email us: tips@dailyturismo.com