In the late ’50s, Volkswagen was high on its wave of success with its little WWII-era Type 1 (Beetle) and derivative commercial / utility vehicle the Type 2 (aka Bus, Van, Microbus, Kombi, Transporter…). But someone deep in the bowels of Wolfsburg realized that if growth and success were to continue, the company needed a bigger, more modern, less obtuse looking car to stay relevant. Enter the Type 3, which retained VWs trademark rear-mounted aircooled boxer four, and torsion bar suspension but was otherwise a fairly ‘normal’ midsize car. The styling has aged gracefully and today these shoebox veedubs are classics in their own right. We’ve found a very nice, low mileage survivor Notchback sedan, a variant never officially imported to the US. Find it here on oldbug.com, for $15000 asking. Location is unspecified but we are betting it’s in Colorado based on the rear plate. 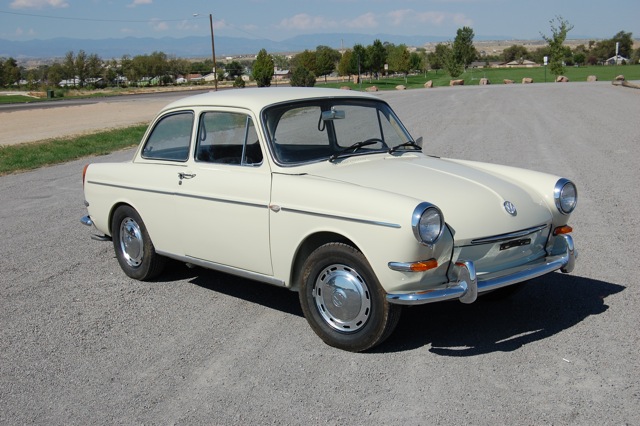 VW needed this car in order to compete in buyer’s minds with the likes of Ford & Opel in Germany, and the Chevy Corvair / Plymouth Valiant / Ford Falcon trio in the US. This Notchback two-door sedan body style was perhaps the most pure version of the car; with its classic three-box styling and rounded edges it resembles a scaled-down “Shoebox” ’49 Ford to this editor’s eye, at least from the rear 3/4 view. The two versions sold in the US were the Squareback (wagon) and Fastback (slopey-hatch version of the sedan) but the proportions on the Notch are just right. The only variation more rare is the Type 34 Karmann Ghia, a unique and kooky Mopar-resembling coupe based on this platform. 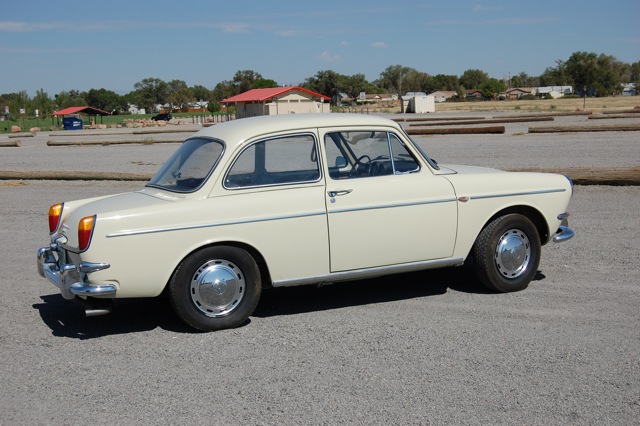 The featured Notchback is a ’64 and is claimed to have 54k original miles, and one repaint over the years. If this is true, it’s in above-average condition; while not being completely original it sure looks the part and is not so nice that we’d be hesitant to drive it. A dealer is selling it (likely on commission from the owner) so we’d take their claims with a grain of salt and thoroughly inspect the car before buying. 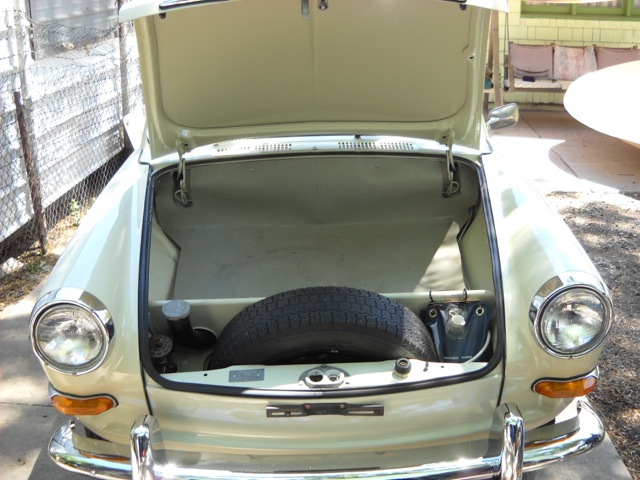 Like it’s older/smaller brother the Beetle, the Type 3 has a usable front trunk compartment with the spare tire, fuel tank, fluid reservoirs and jack living in the nose. There’s a good bit of room up here for everyday luggage, tools, spare plug wires and points, etc. But around back where you might expect to find the engine, open the lid and… 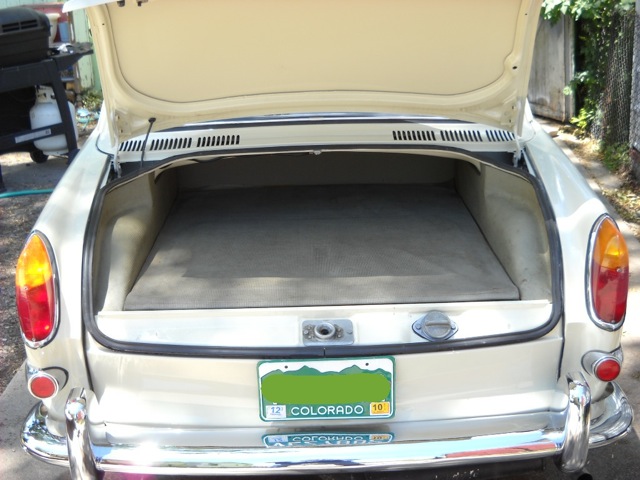 …there’s another trunk to greet you. This one looks big enough for overnight bags, unruly children, golf clubs,  anrgy-mob torches, and the like. While we’re back here it’s worth mentioning the rear styling of this car with its clean chrome bumpers and Karmann Ghia-esque vertical baby tailfins with integrated lights. So what about that boxer four? The oil filler cap to the right of the trunk latch (for easy filling) is a clue to its location. 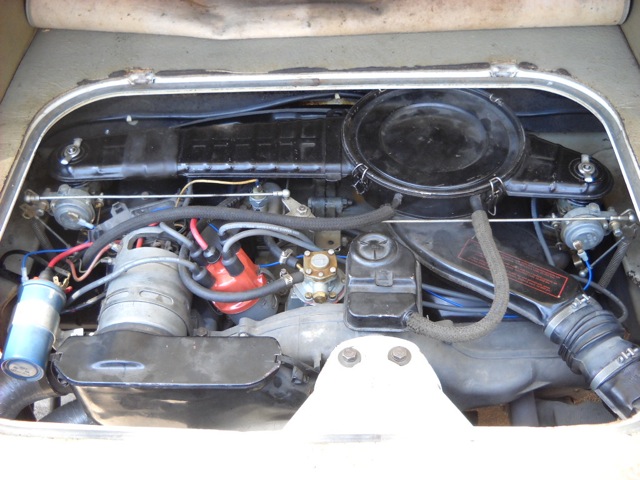 So the engine lives behind an access panel under the trunk floor. The Type 3 has what’s known as a “pancake” engine, meaning VW compacted the cooling fan, ducting, generator, intake and carbs down snug behind and against the top of the engine unlike the “upright” setup in the Type 1. This allowed for the dual-trunk arrangement and much more usable cargo space than a Beetle. This is a 1.5 liter twin-carbureted engine that should be fine for daily driving and the occasional show or road trip. It has been converted to a 12V system which is a big plus over the original weak 6V system. 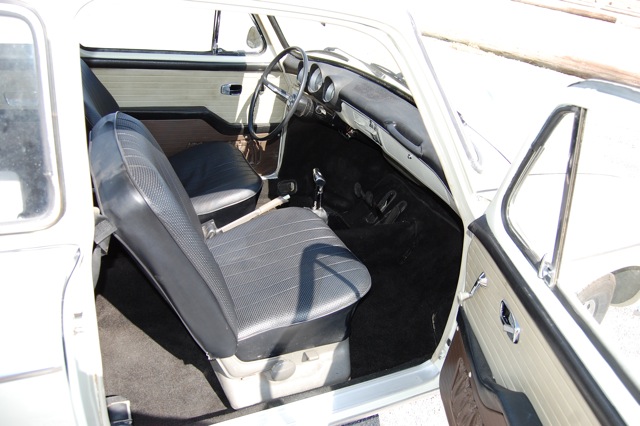 Inside the Notch we find upholstery and dash in nice shape, although the seats may have been recovered and some pictures show that a thorough cleaning is in order. We think this car could be a bargain for slightly less than the asking price, considering it appears to us to be a well-maintained solid car that has likely sat unused for several years and needs detailed attention to be a top-shelf example. If the drivetrain is original and it doesn’t have major rust or accident damage, the new owner should have an easy project on their hands and a semi-rare, aesthetically pleasing, comfortably-riding aircooled VW as the end product.

Watch for a nicer Notch…find one? Email us here: tips@dailyturismo.com