I have to admit that I’ve been a fan of the giant MechWarrior style fighting robots from the BattleTech universe for as long as I can remember.  It’s not that I’m a crazy person who wants humanity to fight slow high tech battles with giant walking robots, it’s just that it seems like the logical next step after tanks become obsolete…and I really want to just cruise around some smokey battlefield in a giant mechanized walking suit.  Unfortunately this next battle mech isn’t equipped with legs (yet!) but it does have most of the other requirements for a good time in a mechanical exosuit. Find this Giant Fighting Robot Megabot here on eBay bidding for $92,000 with a few days to go, located in Oakland, CA. 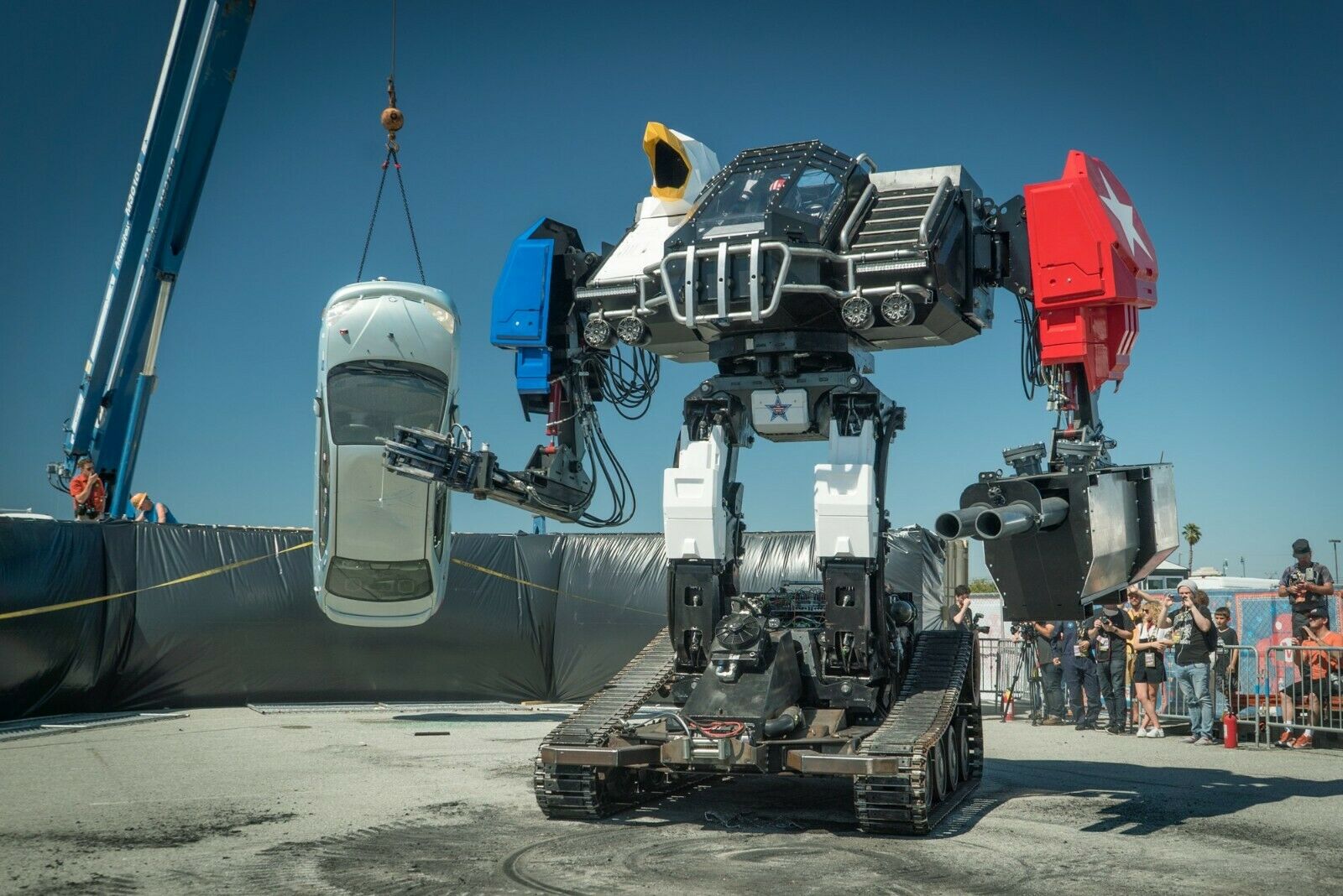 YES, THIS IS REAL. BEFORE ASKING QUESTIONS, WATCH THIS VIDEO ON YOUTUBE.

SEARCH FOR: “Giant Robot on eBay starting at $1”

(URLs are prohibited in eBay descriptions) 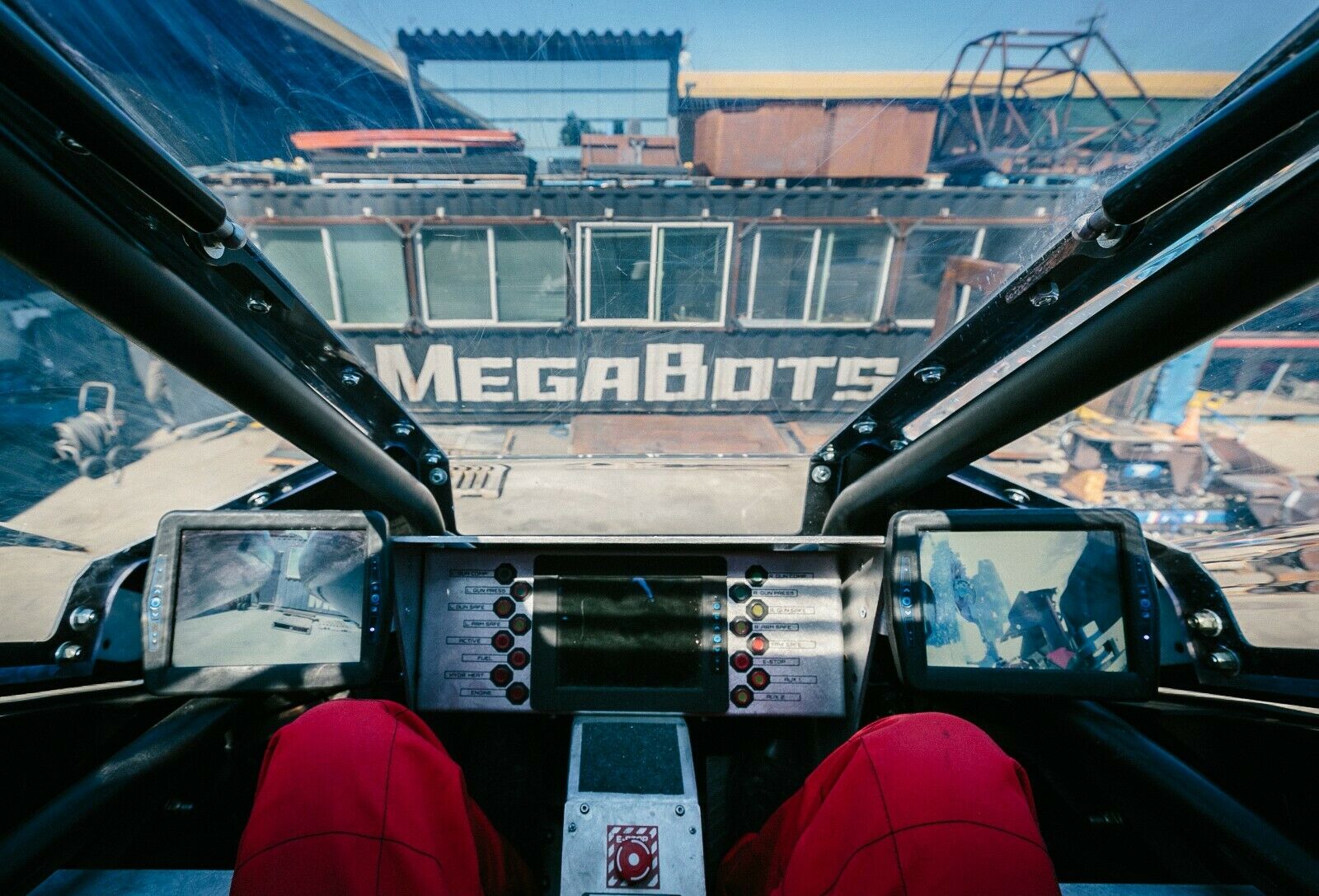 You are bidding on Eagle Prime, one of the world’s only fully-operational piloted battle mechs. This robot was built by MegaBots, Inc. This robot was originally constructed as the United States’ entrant to the well known USA vs Japan Giant Robot Duel. About $2.5M went into this robot, and since then, it has become a worldwide icon, globally recognized by millions.


Eagle Prime is likely the world’s most combat-capable battle mech. This 15-ton robot is powered by a 430 horsepower LS3 V8 Engine commonly found in the chevrolet corvette. It’s piloted by two people, and stands 11.5 ft tall when it’s squatting down, and about 16 ft tall when it’s standing up. Note, it’s often cited as a 12-ton robot online, but those were estimations. After measuring, we now know it weighs 15-tons.


Eagle prime is actuated by common off the shelf hydraulic actuators and valves. Mostly from Parker Hannifin. If you’ve worked on cars and heavy equipment before, you’ll be a natural at servicing this beast.


Its software runs on an open-source java codebase written by IHMC — A non-profit robotics lab located in Pensacola, Florida. Realistically, if you have some programming and robotics chops, you’ll be okay to make minor tweaks, but you’ll likely have to pay them a little bit to consult you through the process of making bigger changes. 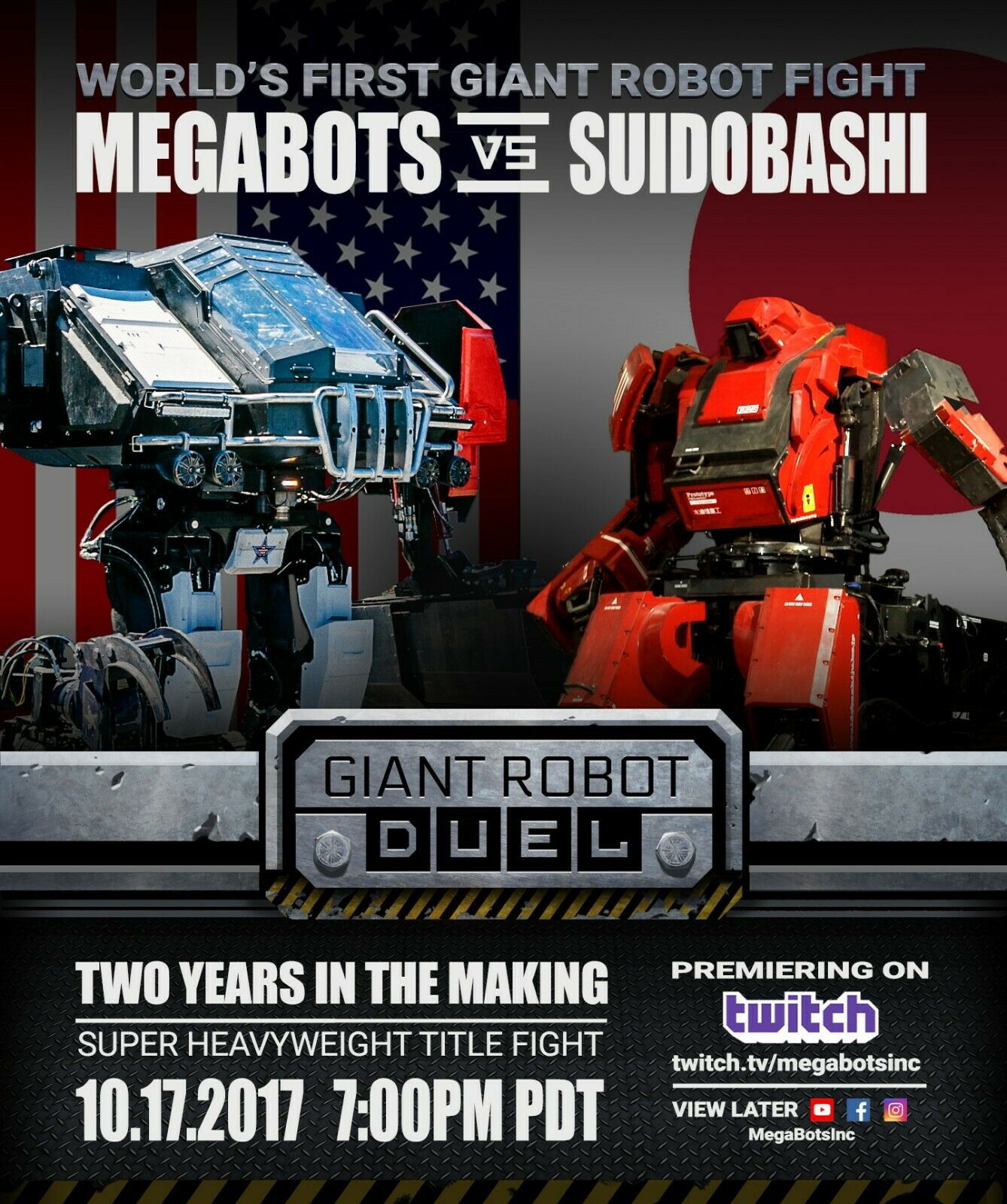 Q: Is there anything wrong it with?

A: The robot is functional, it’s just being auctioned off as the company is bankrupt. For transparency, I want to inform you, (the bidder) of the idiosyncrasies you’re going to have to deal with. Considering how complex this prototype is, they’re really not too bad.


First, when we built this robot, the tracks had rubber pads, similar to most modern tank tracks. The issue is the robot ended up being a lot heavier than we anticipated, and after a few turns on concrete, we realized the rubber wears down way too fast, so we replaced the rubber with really high-density plastic pads that wear much more slowly. After years of use, the plastic pads are pretty worn down and need to be replaced soon. We’ll include the CAD files, but you’ll have to machine them or find a supplier to make them for you. The current ones probably lasted for about 40 hours of drive time on concrete. You should budget around $7K to pay a supplier to make them for you.


Second, it doesn’t handle dirt that well. It runs great on hard surfaces, but when it’s on softer dirt, the treads tend to dig down into the dirt, instead of scrub across the top. It goes forward and backward no problem through softer terrain, but really only pivots well on paved surfaces. 75% of people will ask “are you taking this to burning man?” and you will have to explain this to them. Seriously it’s the most common question we get.


Third, Eagle Prime has a lot of hydraulic hoses and connectors. During the course of operation, it will usually spring a hydraulic leak maybe every 4 hours or so of driving and crushing. So far, every leak we’ve been able to fix with a standard set of large wrenches and a replacement o-ring. I’ll include a bunch.


So, besides the tracks and hydraulics needing some regular maintenance, and being mostly limited to concrete and asphalt, she’ll do what you need ‘er to do! 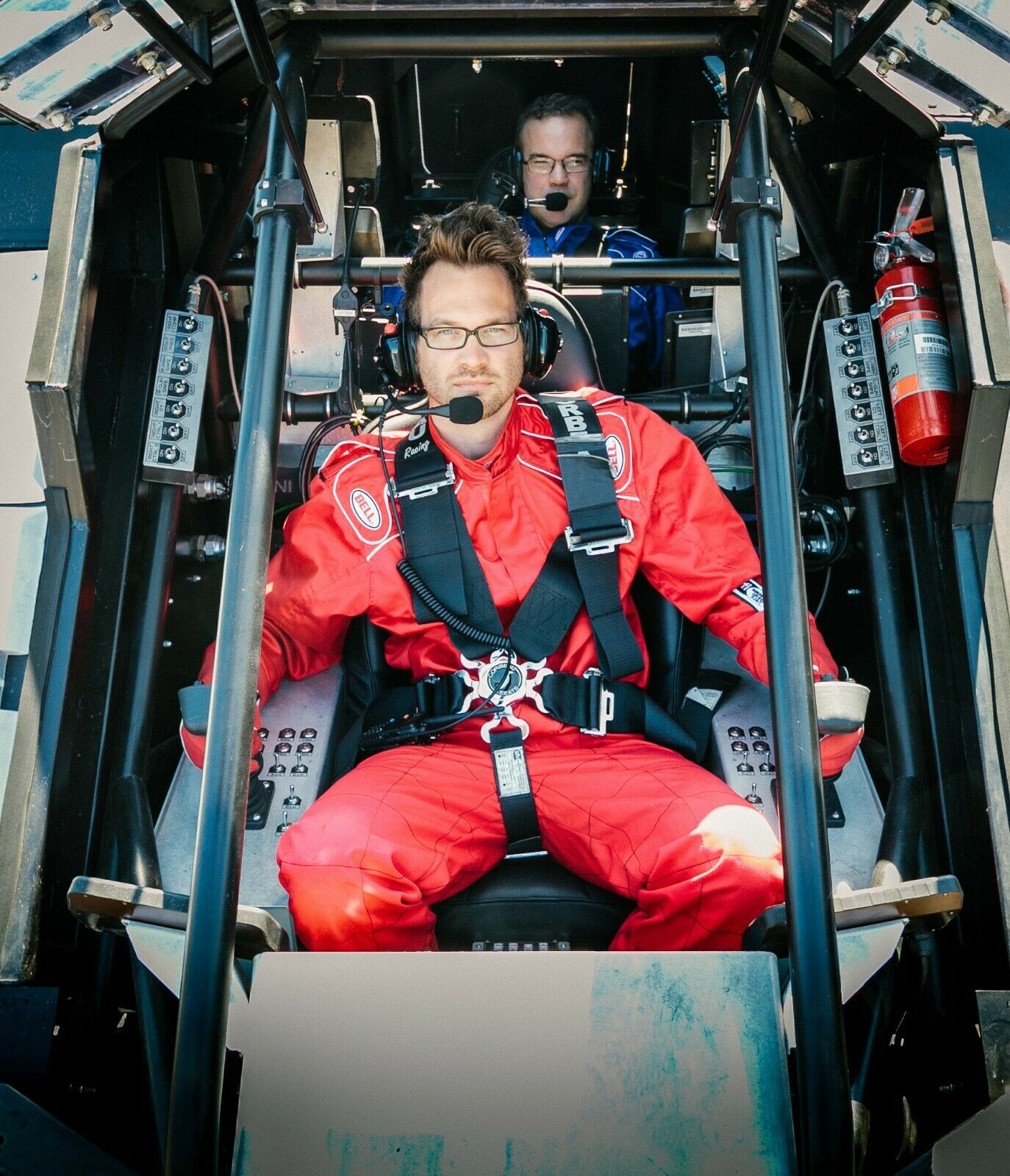 Q: What does the robot come with?

A: The robot comes with a small shipping container of spare parts like extra radiator fans, filters, fuses, cables, and connectors. It also comes with a few extra weapon attachments that can be swapped onto the robot with just a forklift and about 30 minutes of time.

A left arm claw attachment that is a mirrored duplicate of the robots right arm.

A giant (6”) double barreled pneumatic cannon. The giant cannon may or may not work since we used it as a battering ram in the fight with japan, but it should be repairable.


The winning bidder will also receive a perpetual license to Eagle Prime’s CAD files and source code. Which will be transmitted electronically upon receipt of payment. 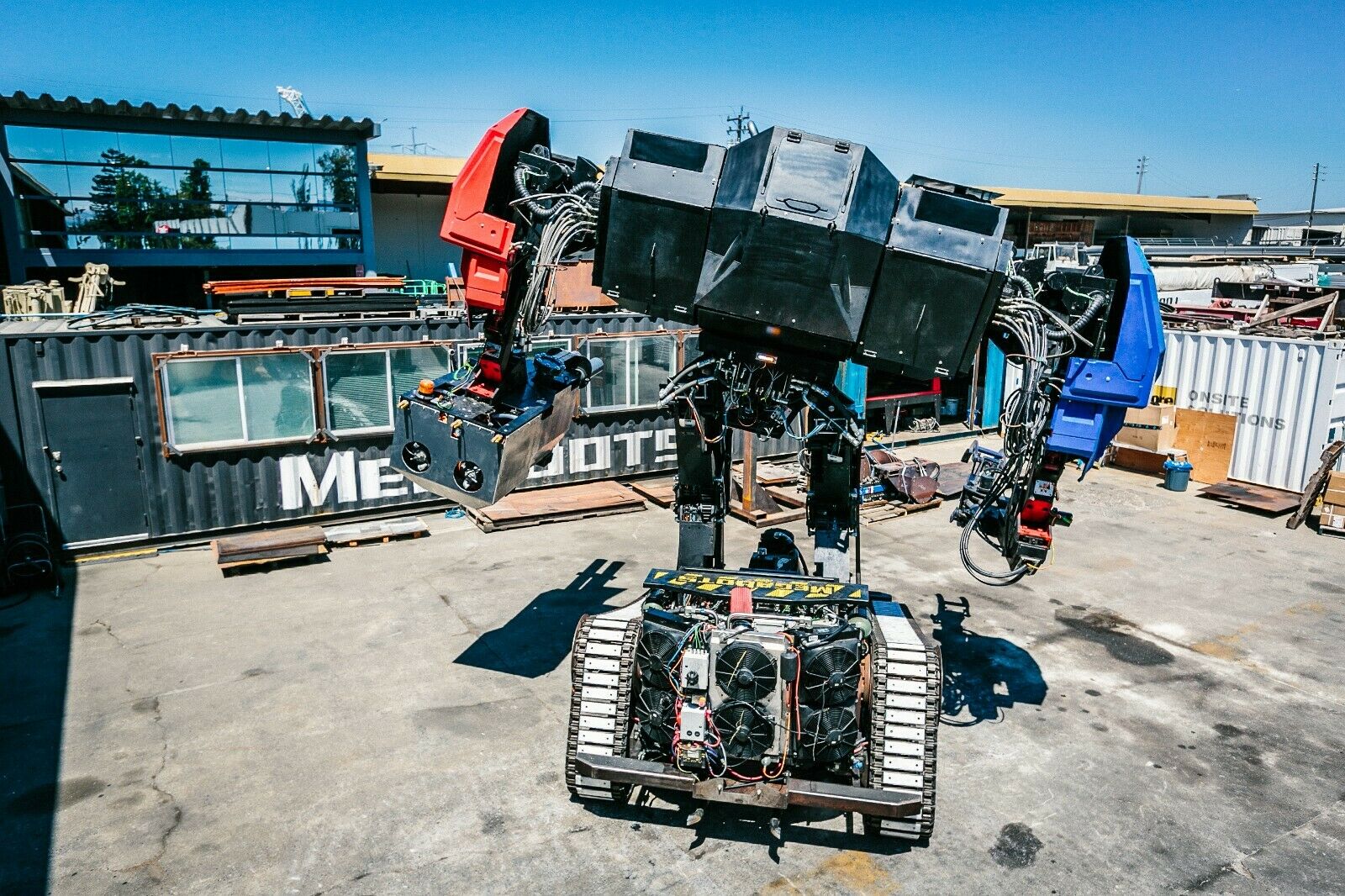 
Q: I want to make money with this. How much does it cost to run?

A:  If you’re bidding on this robot with the intent of monetizing it, here’s what you’ll need to know. This robot usually commands anywhere from $7K for an “at home” show in the back yard, to $150K for transporting it to a foreign country.  If you want to transport it domestically, costs are anywhere from $4K to $35K round-trip depending on destination. It drives onto the back of a low-boy trailer, and is chained down to the deck for transport. We’ll include some ramps to facilitate this.


If you have your own truck to haul it, you could probably make a living hauling it around and doing private events. Just make sure you budget around $2500 in fuel, repairs, and maintenance for each appearance. Things break on this robot, and you’ll have to change the oil every now and then. 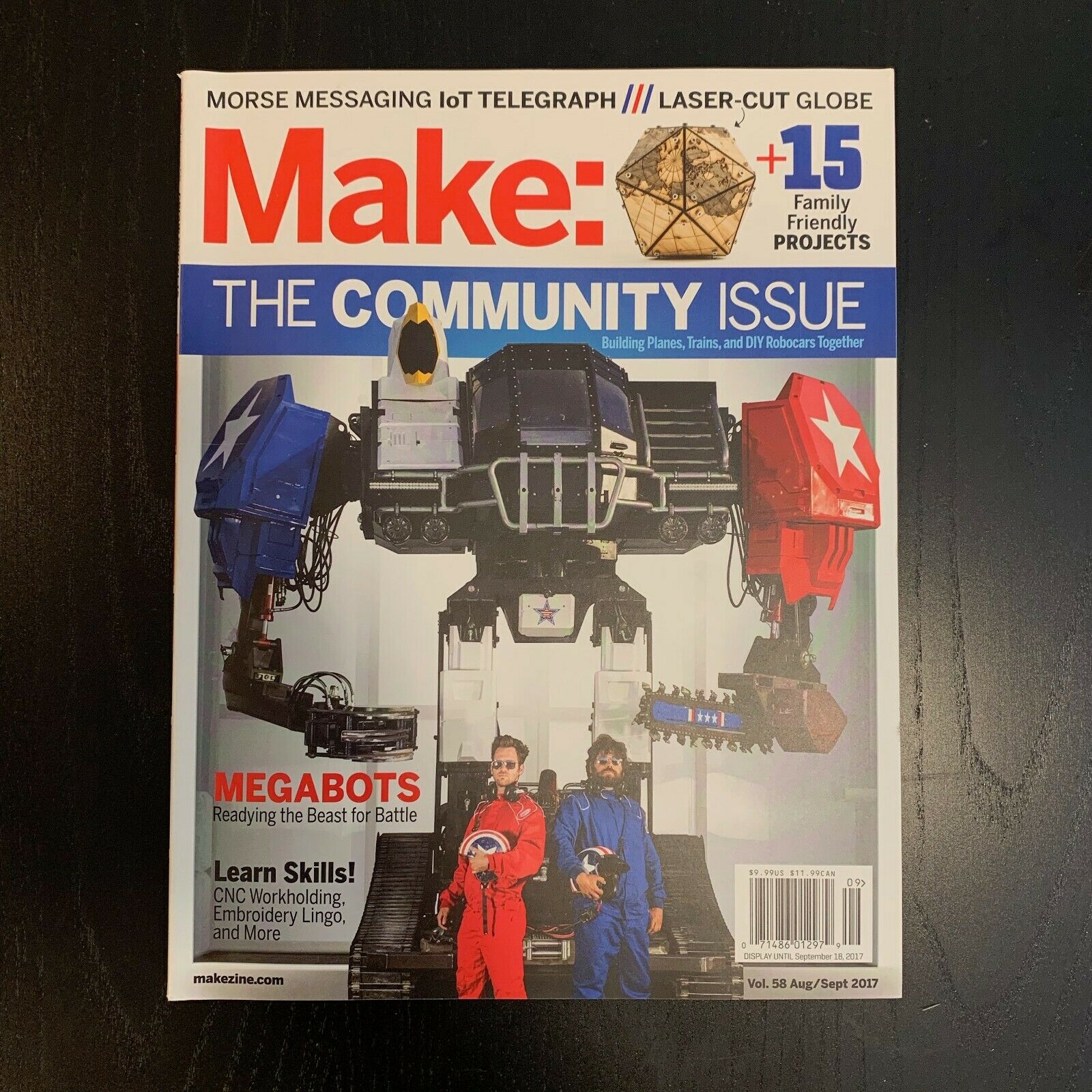 Q: What will shipping cost and how long will it take?

A: Buyer is responsible for paying for shipping, but I am happy to arrange it if needed as well as personally deliver it to its destination. Eagle Prime will ship from Oakland, California. For US domestic buyers, plan for delivery to cost approximately $4000 for west coast destinations and as much as $17,000 for east coast destinations. Shipping may take up to 2 weeks.


For international delivery, plan for about $50K in costs as a safe number. and about 2 month for it to arrive at its destination. 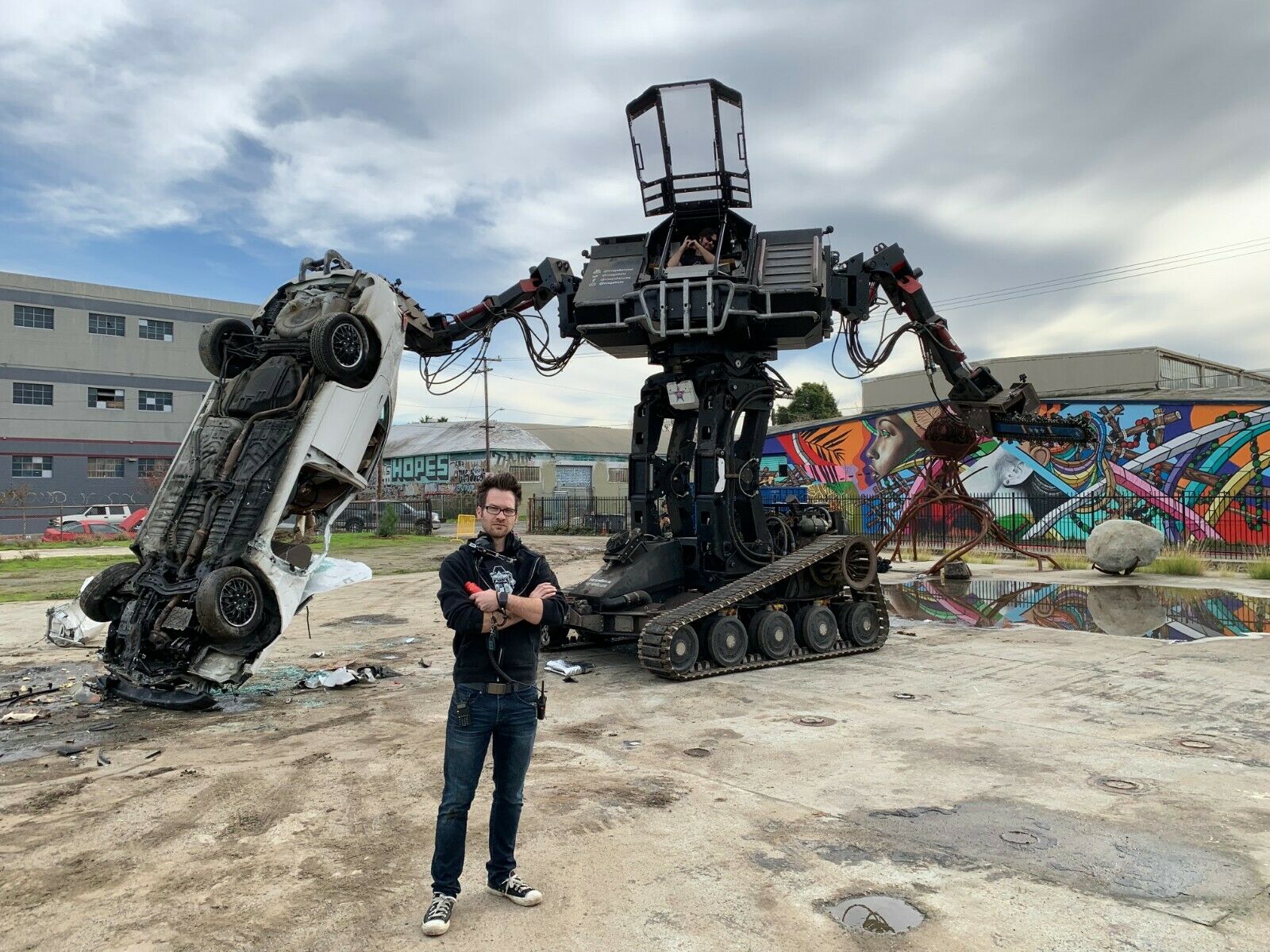 See a better way to drive a ROBOT? tips@dailyturismo.com