Updated: Dec. 31, 2013  Well, it looks like this Corvair we  posted in October will be starting 2014 with a new owner. We found this youtube video which includes a segment of the car being driven, while cruising for more Corvair bargains.  Turns out the car is probably even nicer than we expected, making it an extremely good buy.  The purchaser even knows his vehicles well enough to know when to get a dig in on Corvette owners!

The used car market is a fickle wench, but every now and again she swings our way.  Just as we’re watching the Sunbeam Tigers and pristine VW vans accelerate out of the DT price ranges at an amazing pace, we’re also seeing the market’s bright lights shine on the formerly lowly Corvairs.  Recent ebay sales have been at a higher price and a brisk pace for all manner of Nader-mobiles, but focused on high color or freshly restored 1965-1969 models.  Find this 1965 Corvair Corsa Turbo Convertible for sale in Santa Cruz, CA for $9,000 via craigslist. Tip from our maestro carfindologist Kaibeezy. 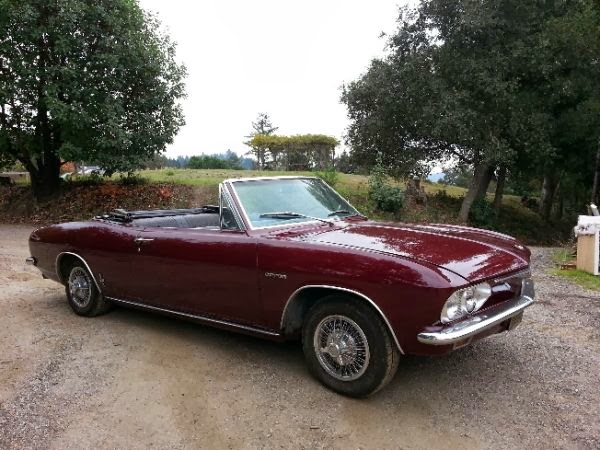 The seller’s description has enough information to suggest that this LA-built convertible was assembled in November of 1965, and is wearing a fresh coat of its original Madeira Maroon paint with what appears to be its original black interior and optional wire wheel covers.

Better still, the seller contends that the car has been freshly tuned up including a rebuilt carb and turbo, but judging by the pictures below, the parts store must have been running a special on the purple plug wires. 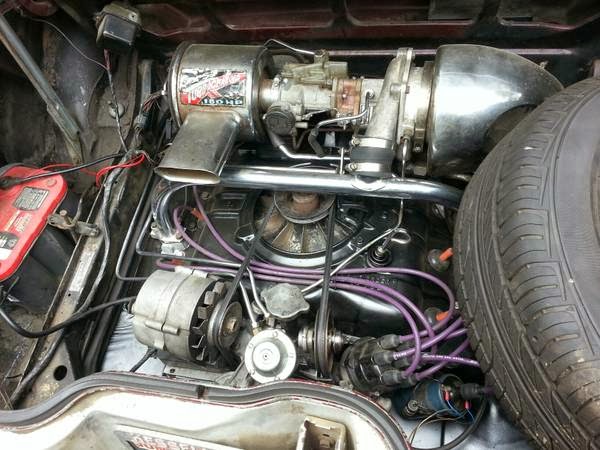 It’s hard to tell from the pictures if this is a well prepped and painted job or a typical bargain basement respray, but at this price there’s room for improvements, which might include fresh carpet from Clark’s Corvairs in Massachusetts. Here is a sample of the recent Corvair sales on ebay which might make a better case for this car than its own ad.