The VW Beetle has a long history of being put under the hot rodder’s torch, a tradition that gave the world dune buggies, Herbie, fiberglass kit clones of supercars, and the Porsche 356 and 911 (arguably). The tradition of modifying the little rear-engined boxer formula continues to this day with the 991 on one end of the spectrum, and a home built turbocharged Subaru EJ22 powered ’58 on the other. Check out this 1958 VW Beetle with Turbo Subie power for sale on TheSamba.com’s classifieds, in Modesto CA for $10.5k or best offer. 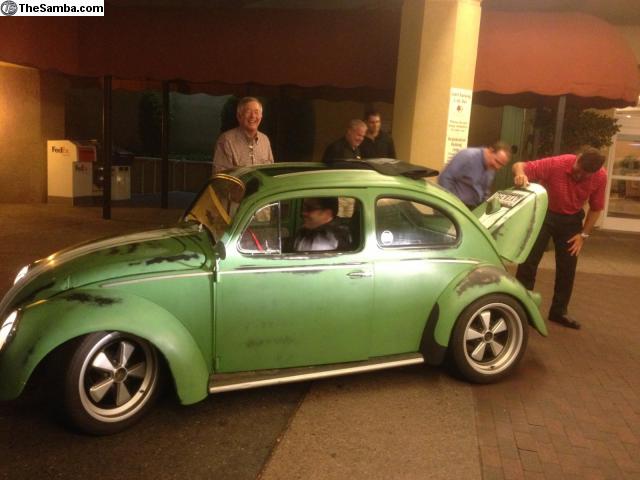 Interestingly enough this bug was built not as a drag car like the vast majority of higher-power custom VWs are, but rather as an autocross machine on a later 1969 IRS platform. The seller linked to his build thread here on The Samba, showing various and primered previous incarnations of the ’58 racing between the cones and straw-hatted “officials.” This guy is our hero when it comes to rear engine VWs; with wider fiberglass fenders he was able to fit 255 mm tires in the rear. That may be gross overkill for your average 50hp barnstorming 1600cc aircooled bug, but this car most certainly isn’t that. 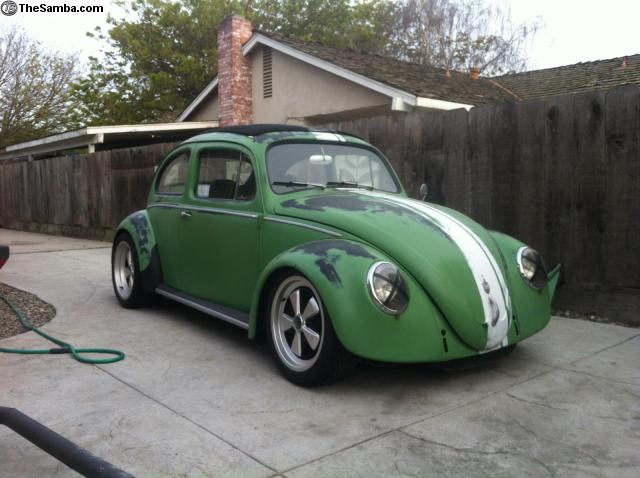 From the green striped, fake patina’d exterior, you’d be hard pressed to notice that this bug is now a water pumper. No huge gashes were made in the front hood for radiator cooling flow; instead the spare tire well just behind the handle was cut out and a custom street sign shroud fabricated to collect air from under the front of the car and direct it up through the radiator and out under the gas tank. Honestly, for aerodynamic purposes you want the underside of an original Beetle to be as much of a low-pressure zone as you can get (the front ends tend to get very light at speed) but a well engineered chin scoop would mitigate any cooling concerns…if the builder hasn’t already done so. 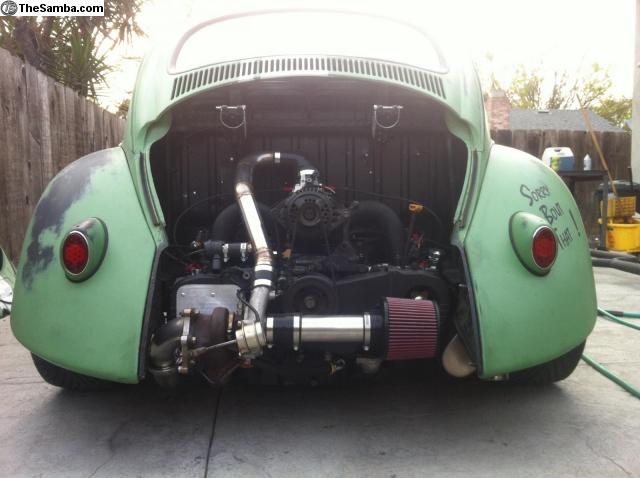 The seller/builder’s engine of choice was the basic 2.2L Subaru EJ22 flat four. This is the garden variety engine that powered many a Legacy, base Impreza, and Outback throughout the ’90s and early 2000s. In stock form these engines put out about 140hp on a good day, through a single exhaust port at the bottom of each cylinder head. They are cheap and easy to find in junkyards (reading through the build thread, looks this car has been through several of them) which makes it a great choice for a budget trial-and-error turbo build. The seller claims around 225 rwhp from the beast as it is now, with a stock WRX turbocharger set at 12 psi and Megasquirt 2 engine management. 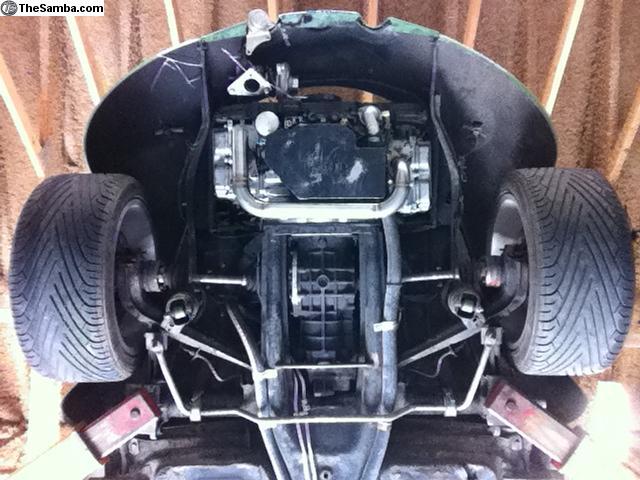 This upskirt lift shot was taken in the midst of turbo system fabrication but it shows the current 245/45R17 rear tires, the 1969 double-jointed semi trailing arm rear suspension, Porsche 944 torsion bars & dampers, and the aftermarket anti-roll bar. This thing should be a terror out of the corners; with 225 hp and likely weighing about 1500 lbs it will have a power to weight ratio somewhere between that of a standard C6 Corvette and a C6 Z06. 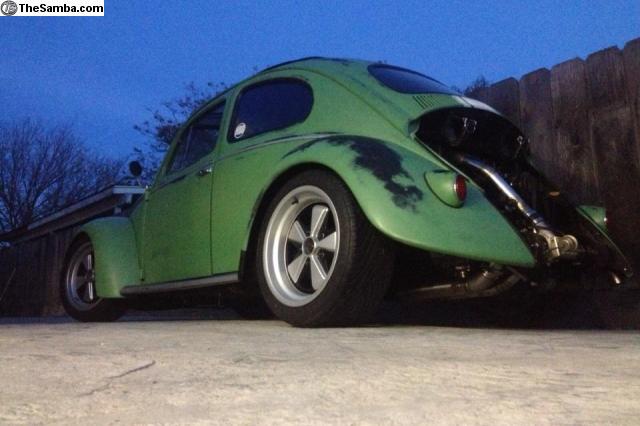 The paint may not be to every potential buyer’s taste but the early big window ’58 body looks nice enough that it could be finished off in a standard VW color to be more of a low-key sleeper restomod car. As it is now, it’s more of a rat racer – and that’s fine. The stock ragtop sunroof is a big value adder as are the several sets of wheels including genuine Fuchs 5-spokes and newer, larger Fuchs copies (in the pics shown). For $10k this is a true performance bargain.

The car is also cross-posted on the Turbobricks.com classifieds, where the seller states he wants to sell this to build a Volvo 142. We can’t argue with that! If he builds a vintage Volvo to this same level and sells it in the future you can bet it we will whore it out right here on Daily Turismo.