In our regular search for a good e34 M5 we found a veritable cornucopia of M5 goodness and decided it was worth a full e34 M5 market update posting.  The e34 generation M5 was the last of the ‘hand-built’ BMW M-cars and was only sold in the US market from 1990-1993.  Today the entry price to the e34 M5 couldn’t be lower and while nice e28 M5s are starting to command high prices, the e34 generation is nearing the bottom of its depreciation curve…or so it would seem. 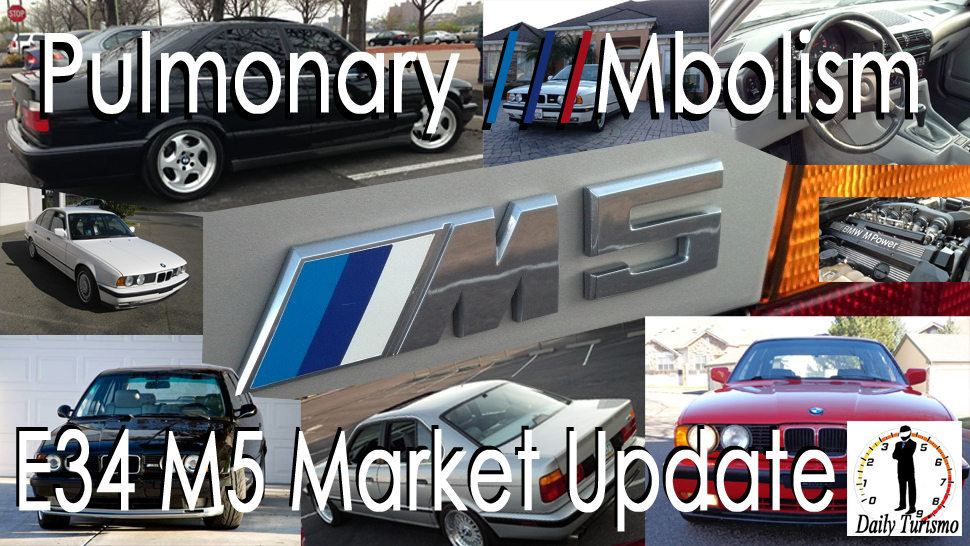 The e34 M5 was the BMW Motorsports version of the 5-series and it continued the tradition of the 4-door Bavarian speed machine originally started by the limited production e28 M5.  The e34 M5 was only available equipped with heavily bolstered leather sport seats, a big DOHC inline-6, manual transmission and limited slip differential out back.

Let’s start off with a few examples… 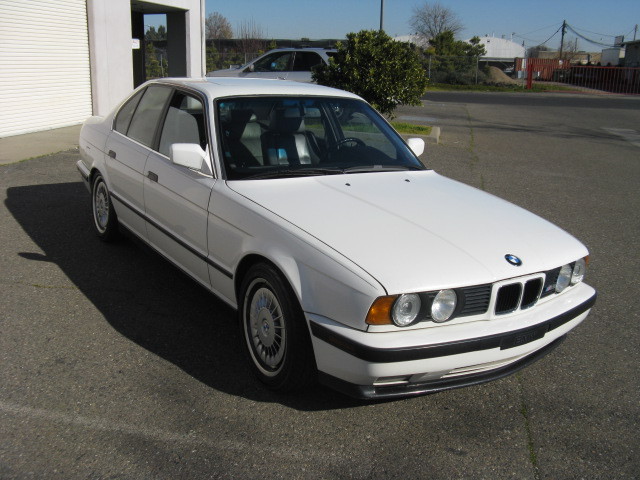 First is this 1991 BMW M5 for sale in SLC, UT, currently bidding on ebay for $5,100 with a buy-it-now of $8,250.  We start with this M5 because it is a good example of an early car with fairly high miles being offered for what seems to be a low price.  It is powered by the US spec S38B36 that makes 307 horsepower and 266 ft-lbs of torque.  As with all USDM e34 M5s, it is offered with a 5-speed manual transmission connected to the rear wheels. 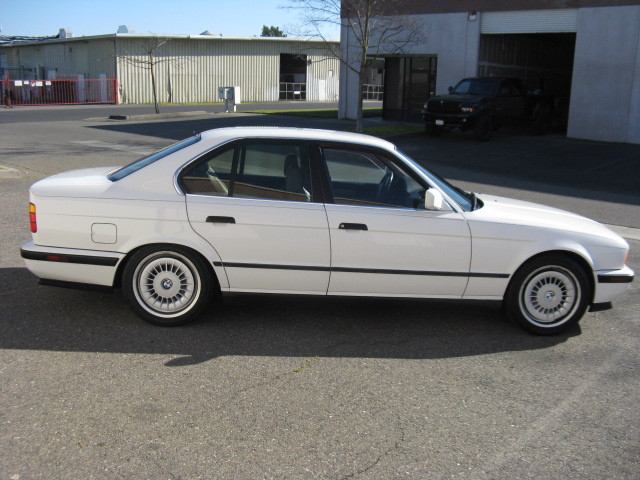 The early e34 M5s were sold with a very cool wheel setup, called the M-System.  It used an 17×8 black alloy wheel covered with a bolted on direction wheel cover with fins that were designed to draw cool air into the brake/hub assembly similar to something used on a modern F1 car.  Bidding is about to end and it looks like the bids won’t get much above $6k…perhaps this car will come back on ebay with a lower reserve. 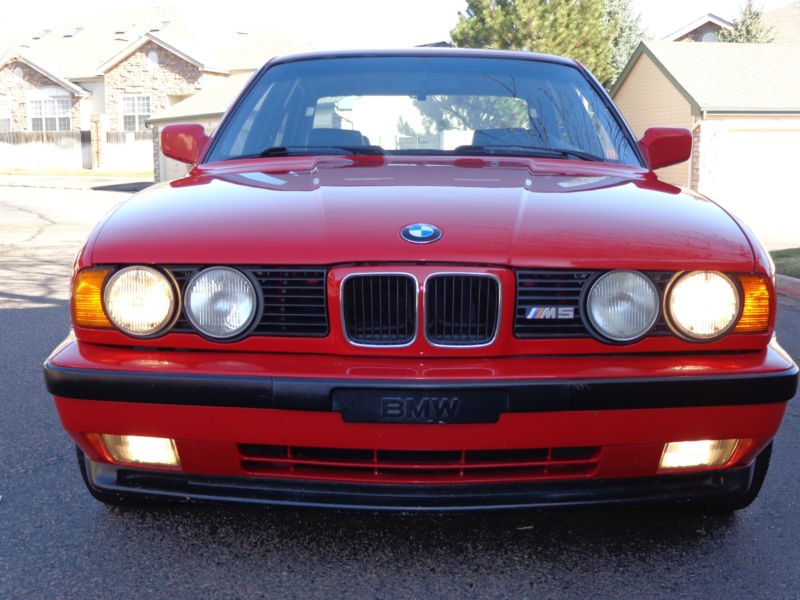 Next up is this red beauty, a 1991 BMW M5 for sale in Aurora, CO currently bidding on ebay for $7,000 reserve-not-met with a few days to go.  This one is relatively low miles for a 20 year old car, with 106k on the odometer and we expect the reserve price will be higher than most bidders are willing to offer. 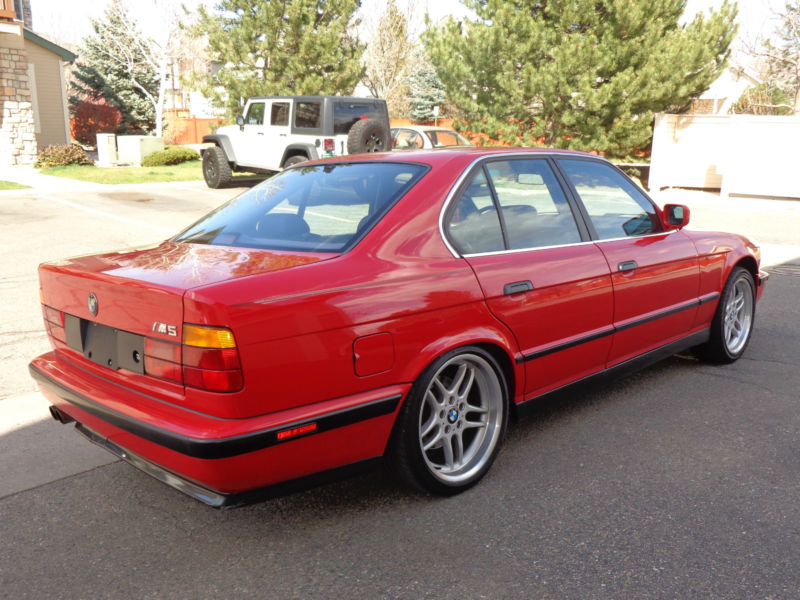 The original M-System wheels are gone and in the place are a set of 18inch M-Parallel wheels, not our first choice…but the red color is certainly more flashy than the typical black/white/silver that we tend to find.  Unfortunately for all the lip service to this being a great car and service records, the ebay listing has little concrete data to back it up – this one will require a thorough in person inspection.  Expect bidding to end somewhere below $10k on this one. 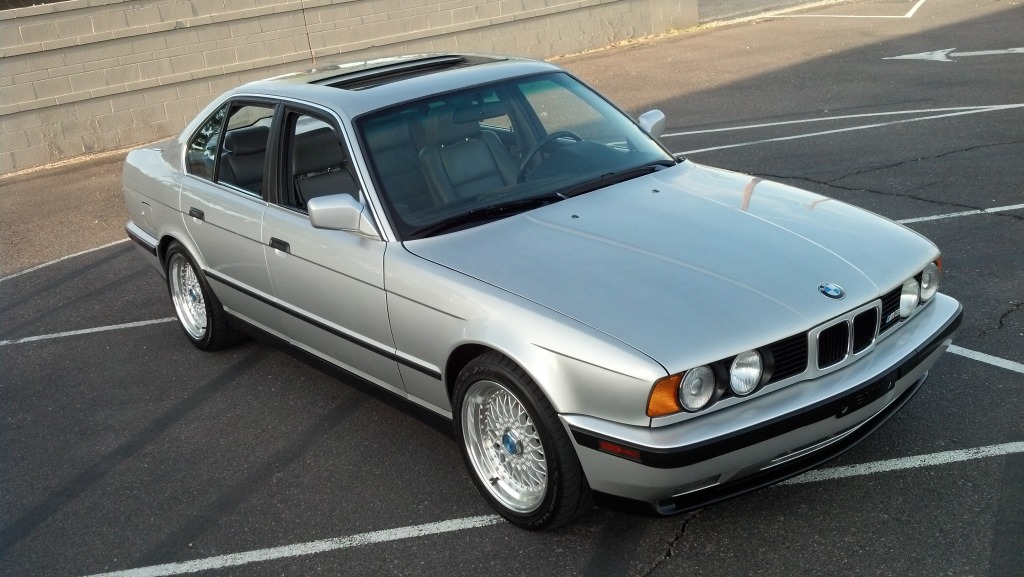 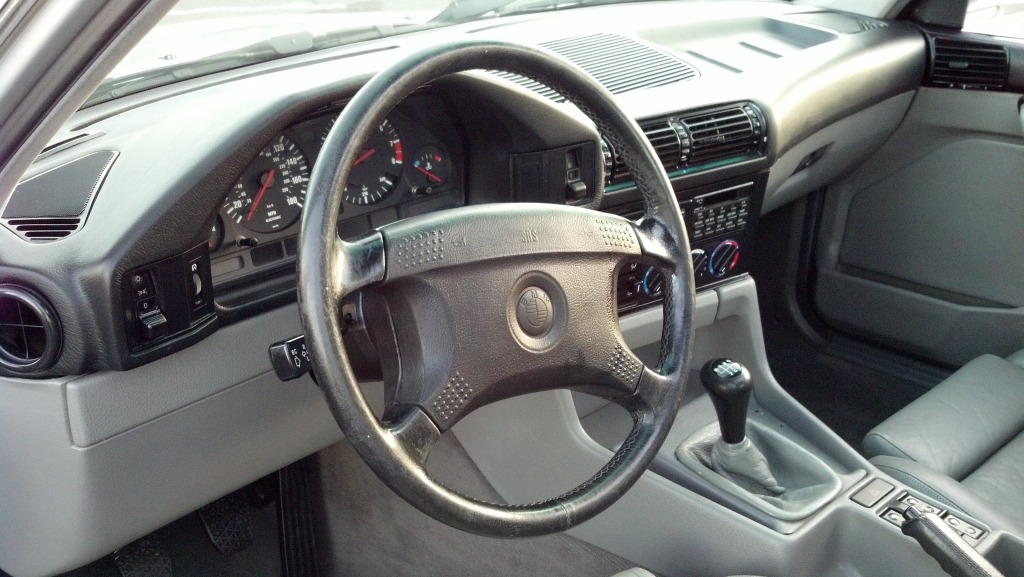 A quick glance at the interior shows a sight familiar to anyone who has driven in an 80s/90s era BMW – classic driver-centric console with a 5-spd manual (only Europeans got an option for a 6-spd manual trans in the later 3.8 liter cars…also exclusive to Europe).  The large diameter steering wheel is attached to an old-school style gear-reduction steering box with recirculating ball power assist, a setup still used on heavy duty trucks, skid-steers & bobcats today.  No modern ‘sports’ car uses a non rack & pinion setup and the BMW 5-series was one of the last of its breed to use the old steering box setup – BMW finally added a  R&P to the M5 in 2005 with the introduction of the E60 M5.  Proper setup of suspension geometric (camber, caster, toe) can give a decent level of feedback, but the M5 is years away from the telepathic feel of the R&P setup from a similar vintage M3.  Similar to the previous red M5, we can’t see this one getting much above $10k unless multiple people want it badly. 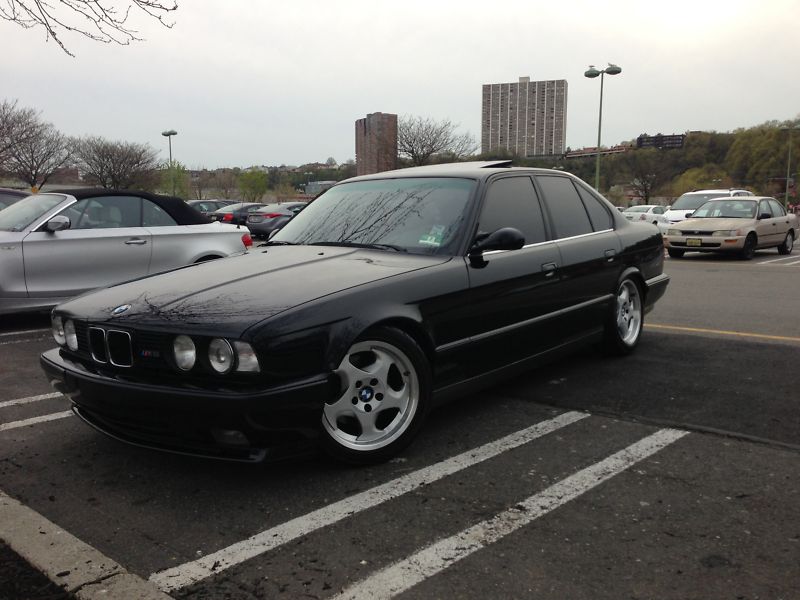 Up next is another 1991 BMW M5, this one covered in BMW schwartz black paint and for sale in Fort Lee, NJ for $11,500 or-best-offer on ebay.  The owner of this e34 is claiming to have dumped $40k into the car in the past few years, giving some insight into why these cars are so affordable… 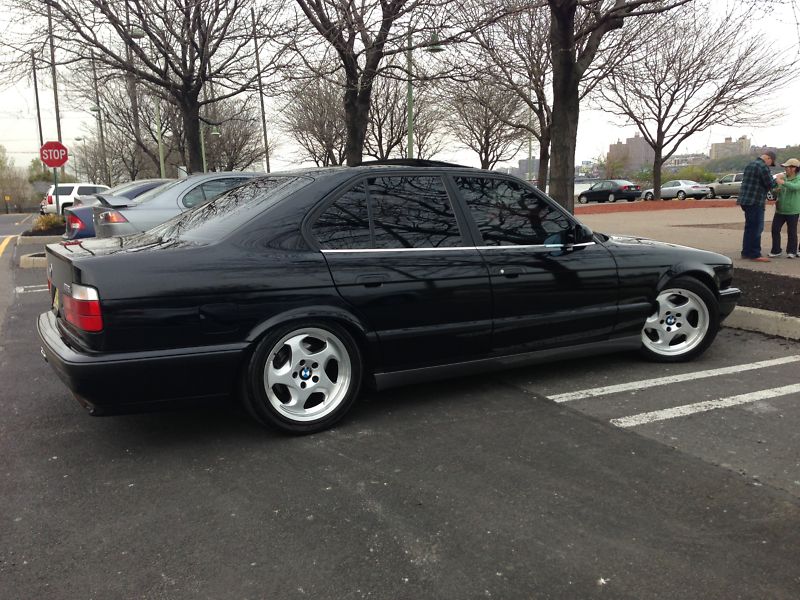 This one is equipped with the later M-System II wheels that use a forged alloy wheel covered in a bolt on ‘throwing star’ wheel cover that is also supposed to help with brake/hub cooling.  This car is also nearing 200k miles, and is a testament to how long these things will last if you keep throwing money at them…seriously head work gets really expensive as the S38B36 uses a complex head gasket setup that makes any kind of top end work a major headache.  We are going to pass on this one because at 200k miles the buy-it-now should be closer to the first car (the white one) listed. 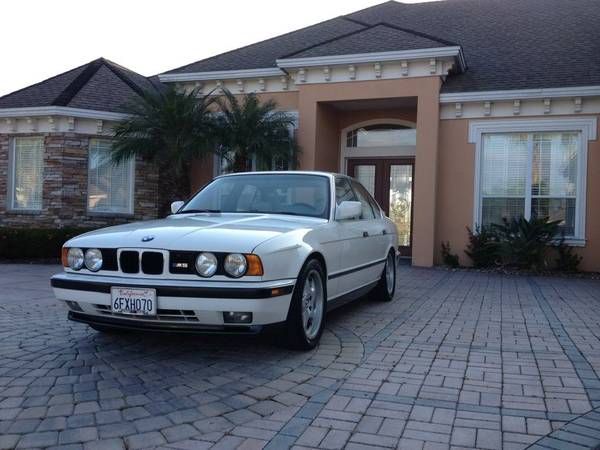 On the higher end of the market we found this 1991 BMW M5 for sale in Atlanta, GA for $17,000 obo via craigslist.  The car has only 81k miles on it and was recently imported from California (still wears its Cali plates) so it is free from the savages of salt/snow/alligators.   The seller assures us that the car needs nothing (other than a lower asking price…). 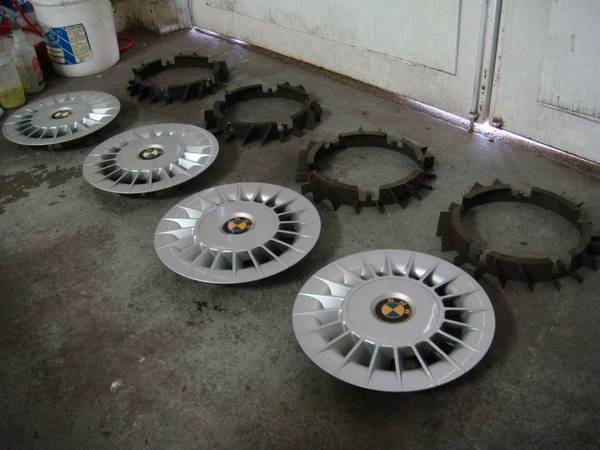 The seller also included a photo of the original M-System wheel covers along with the sandwiched directional fan assemblies.  We would probably run the stock wheels on an e34 M5 only to be able to point out the turbine blades to fellow gear heads “hey, check this out…”  The asking price is a bit steep, but it was the nicest one we could find, but we expect it to sell somewhere around $15k. 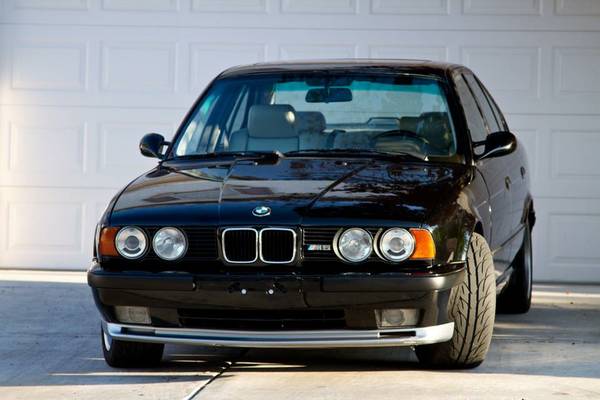 The final M5 we want to highlight comes from the last year of the e34 US imports and is a 1993 BMW M5 located in Las Vegas, NV for sale on craigslist for $8,300.   The 1993 edition benefits from a few minor updates, including Motorsport engraved plastic door handles and M-style side view mirrors.  This example has 195k miles on the odometer and its asking price is appropriately reasonable. 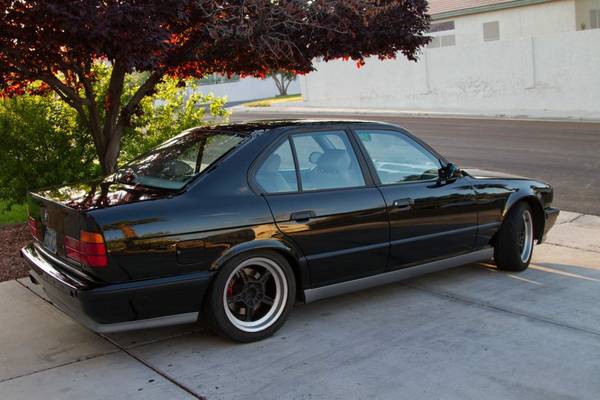 No word on the availability of the original M-System II throwing star wheels, but the seller has recently replaced some suspension components (seems to be a common theme in the adverts..).  Overall not a bad piece of machinery for the price.

We hope you have enjoyed the meandering journey through the world of e34 M5s and perhaps we’ve convinced a few more people to open their wallets to support their local BMW mechanic with the purchase of a high-mile M5.

See a remarkable M5 we missed?  Want us to do a market update on a different car? email us here: tips@dailyturismo.com