We’ve said it before, but the ’57 Chevy is one of those motoring icons where the nostalginflation and greed has driven
prices through the roof of what was once an affordable classic.  No need to worry about it, there isn’t much you can do (aside from keeping an eye out for the good deals) but the ’57 Chevy wasn’t always a auction house crowd pleaser; the bargain-price past is easy to see once you comprehend what people did with them when they were cheap.  Find this 1957 Chevrolet 210 4-Door Wagon custom 4X4 for sale in Santa Maria, CA for $13,000 via craigslist.  Tip from Andrey S. 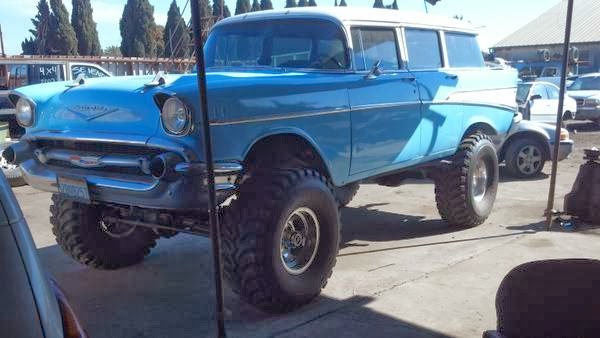 Chevy built over 1.5 million cars for the 1957 model year and for many years they littered the local paper classifieds like unwanted mutt puppies.  For whatever reason, they soon became a favorite of hot rodders, hill-billies, hobos and hipsters alike — to the point that a ’57 Chevy is the defacto classic car shape.  In the meantime folks who just picked them up for cheap to turn into a monster car on the weekend for fun rode this wave of appreciation.  Instead of leaving it in a ditch the first time it rolls, they’ve kept them around and now you can pick up a crazy custom example for less than a nice original version.  Great news if you live in a bog or have a surplus of Calvin peeing on Ford stickers. 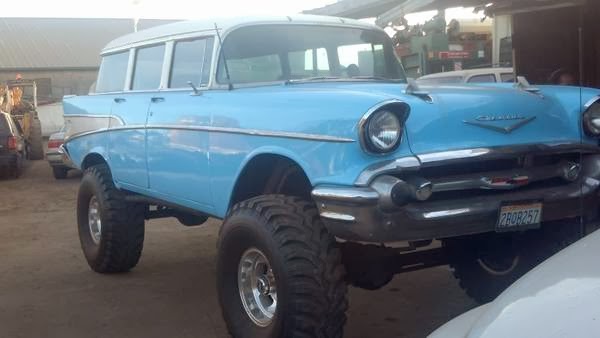 See a better way to terrorize the neighborhood while getting thumbs up from everyone who was born before 1955?  tips@dailyturismo.com