Another shooting brake? Surely we must be joking! In the immortal words of Leslie Nielsen, “I am serious. And don’t call me Shirley.” This marks the second coupe/wagon mash-up we have featured on Daily Turismo thus far. On the other hand, it’s our 8th BMW – trust us, we’re not pricks – they just happen to provide a great mix of balanced chassis dynamics and woeful depreciation. Today’s victim is this 1999 Z3 Coupe (not the M Coupe!) currently up on ebay in Seattle, WA for $10,900, “Buy it Now” price. 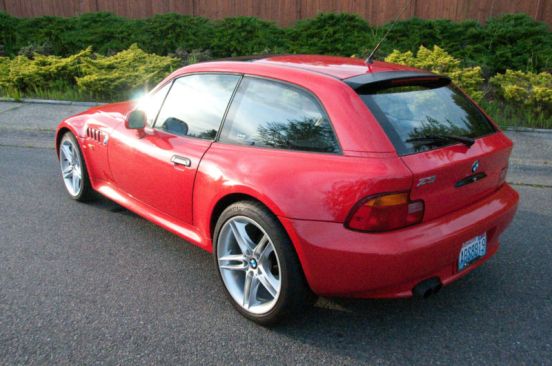 The Z3 started life as a 4-cylinder-only roadster based on the E36, but got progressively more interesting as the years wore on and the “chick car”ness was gradually eradicated from it. The coupe / shooting brake / clown shoe / whatever you want to call it version was conceived initially as the M Coupe, with a firebreathing 3.2L inline six. However someone in BMW upper management listened to the sales & finance weenies and decided to exploit economies of scale and release a more plebian “standard” Z3 version.

The M Coupe’s unit body was about one millionty times stiffer in torsion than the Z3 roadster, and had wicked looking fender flares that gave it a haunched bustle-back booty. Amazingly the exact same wider body shell was pressed into duty on the Z3 Coupe, complete with flares, albeit rolling on narrower wheels & tires. What this means for you, dear Daily Turismo reader, is that this poor man’s version of the M Coupe is available for around half the cost in 2012 dollars, but with all of the same upgrade potential and rigidity improvements. Who could  turn down bargain rigidity? No one! Certainly not knock-off Viagra shoppers in Tijuana! 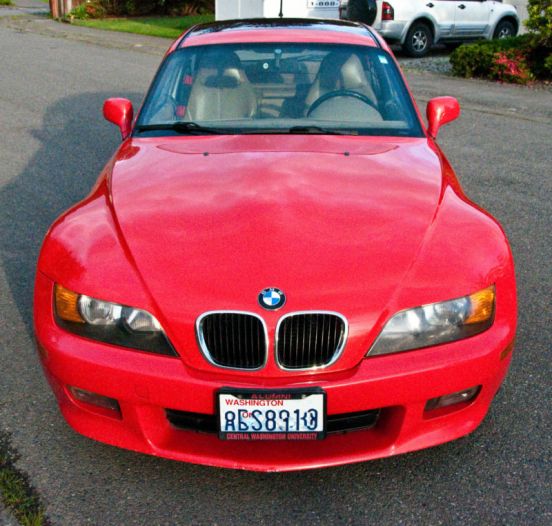 So before you start typing out that comment about this being the poser version of the M, consider the specs for a second: compact RWD coupe, manual trans, around 200 hp (190 to be exact), around 2800 lbs curb weight…enough cargo room to carry your crap to a track day…is this sounding familiar? On paper this car is very very similar to the newly released Toyobaru twins, the Scion FR-S and Subaru BRZ. Of course they are about as dissimilar looking as a sauerbraten and a tuna hand roll, but again this Z3 coupe wins on price in this comparison. It also wins on torques: 203 lb-ft from its 2.8L inline six vs. a measly 151 from the Subaru FA 2.0L flat four. We never thought we’d call a naturally aspirated BMW six torquey, but there you go. 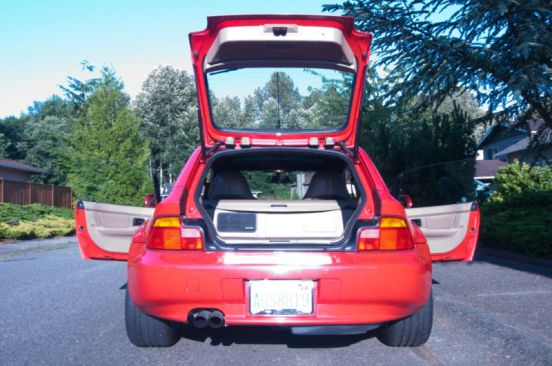 This particular Dorkmobile looks to be in surprisingly nice condition for its age and 140k mileage. The only problem disclosed is an illuminated ABS light – what’s the worst that could happen? It has been upgraded with Z4M 18″ wheels which do make it appear more manly than the OE rolling stock, and fill out those big arches much better. These basically have the smallest rear cargo area of any hatch or 2-door wagon we’ve seen, but it’s an improvement over the roadster. That’s partially due to the 2nd bulkhead behind the rear seats that serves as a home for the subwoofer and disc changer, and prevents your groceries from decapitating you during an ABS-less panic stop. The burlwood dash panels are a bit too Broughamic for a performance car, but they should be easy to exterminate and the rest of the tan interior looks fine. 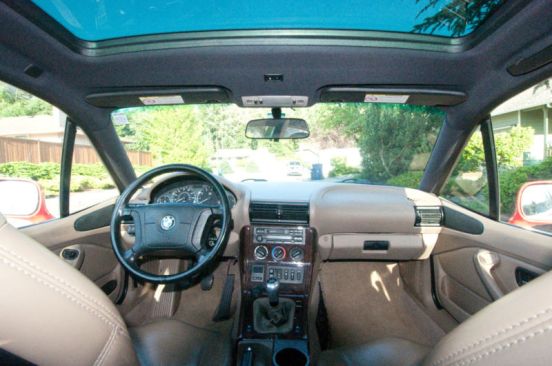 Tell us what you think – is this clown shoe a size too big for your clompers? Or too small & wimpy compared to its M-brethren?  The handling on Z3 coupes (M or non) has always been praised for being fun to drive and very tail happy – part of this due to the fact that the semi-trailing arm rear suspension from the E30 3-series was used instead of more sophisticated multi-link from the E36.  The rear upper shock mounts are known to fail at regular interval further demonstrating BMW’s inability to design rubber components to last longer than toilet paper. 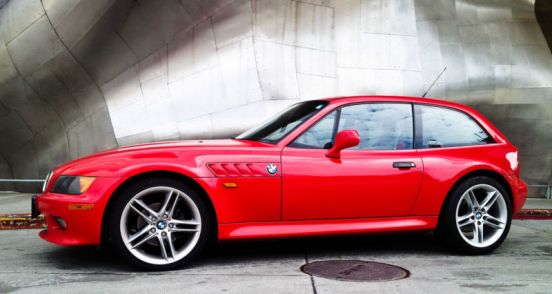