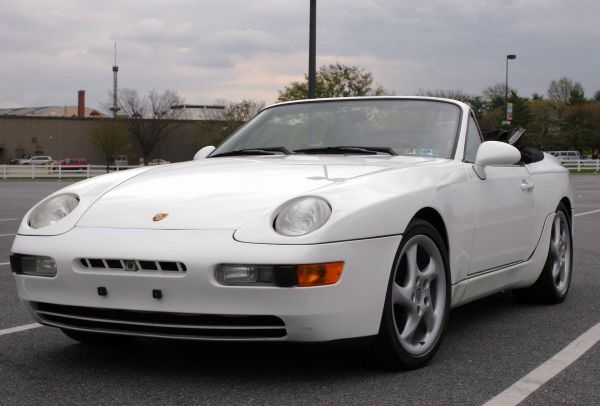 The Porsche 968 was the final iteration in the lineage of the 924 and 944. Like Secretariat bred from the line of heffers, the lineage includes the 1976 Porsche 924 that made 95 horsepower and shared an engine with the Audi 100 & AMC Gremlin.  More mule than thoroughbred, the 924 lived for many years – even sharing a stable with is Porsche engined foal – the 944 – from 1982-1988.  The 944 was sent to the glue factory before the birth of the 968 in 1992 – and it can probably be said with confidence that the 968 is the best of the front engined Poroughbreds.  Speaking of ‘factories,’ the 968 was the first of the 924/944 line to be built in a Porsche factory – the previous breeds being built at an Audi plant under contract from Porsche AG.

The 968 is powered by a 3.0 liter DOHC inline 4 cylinder engine making 236 horsepower and 225 ft-lbs of torque, noted for its enormous cylinders (it was the second largest 4 cylinder engine in a production engine from any manufacturer at that time).  But don’t think the 968 engine belongs in a John Deere – its actually a nice oversquare design that revvs freely to its redline with a sweet grunty exhaust note.  The engine is mated to a 6 speed manual transaxle with available limited slip differential. 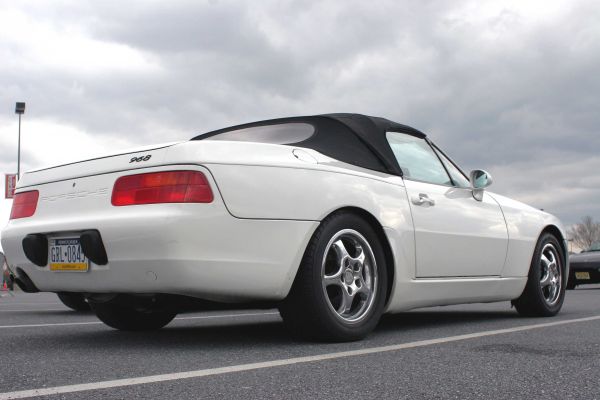 We’ve always been fans of the shape of the 968 – especially in convertible form and this white one looks great with the Porsche turbo twist wheels or the stock chrome wheels (at first glance it looked like the owner had one set on the driver side and another on passenger, but apparently the car is offered with both sets of wheels).  Inside the 968 you will find a simple dash with clear gauges (always orange needles and black faces with white numbers).

We like the 968 because they are cheap today – cheap like a 3 legged racehorse.  Pick one up now before people figure out that they are fantastic handling machines with decent reliability.

Does this pony belong in your stable or in a Jack in the Box burger?