A super capable off roader is not something one would normally think of as a Daily Turismo per se, maybe more like an occasional rock crusher. But a 4×4 pickup or SUV with careful suspension component selection and tuning, with the right tires and without a ridiculous amount of lift, can be a fantastic daily driver for someone who wants to be ready for anything, at any time. This Toyota “Truck” (aka Hilux in the rest of the world) is a 5th-generation N50 model, the last available in the US before being replaced by the larger, cushier Tacoma. It has been extensively modified and reconditioned to a very high level; an “expedition restoration” (maybe an Restxpo-mod?) is an unusual but interesting take on a 4×4 build. Behold this 1990 Toyota Hilux listed here on the Expedition Portal forums for $9500 in Tempe, AZ. 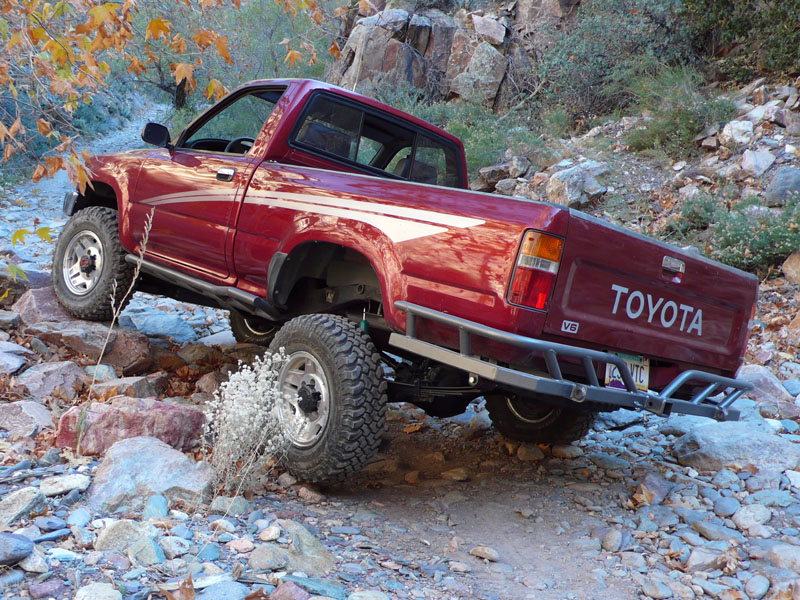 We realize that $9500 might seem quite steep for a 22-year-old mini truck, but the owner / builder (Sonoran Steel, a 4×4 component fab shop) most likely has many times that invested because of the sheer quantity and quality of parts used in the build. We doubt it could be reproduced for anywhere near this amount, even if one were to start with another pristine stock 4×4 Hilux – which are getting to be scarce. 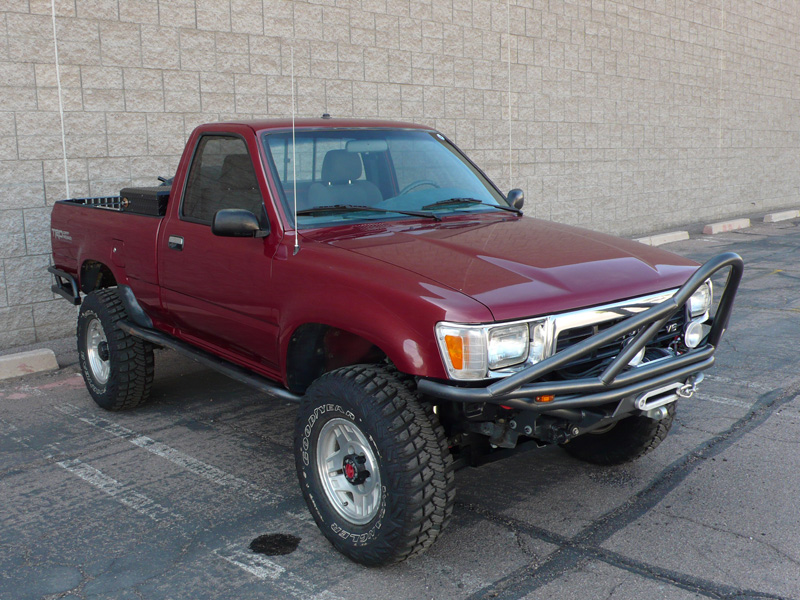 There’s such a long list of modifications, upgrades and parts replaced that we will not even try to replicate it here on DT. But let’s take a look at the standouts. First of all the truck is immaculate, with no apparent body damage or rust, and fresh paint in the original color. It is fully ‘armored’ with tube bumpers front and rear, and rock sliders protecting the underbody on each side between the wheels. Tires are 31″ x 10.5″ Goodyear Wrangler MT/R Kevlars mounted on 15 inch OEM Toyota alloy wheels. This is a perfect size for one of these trucks – big enough to be capable, but still small enough to be reasonable for road use. 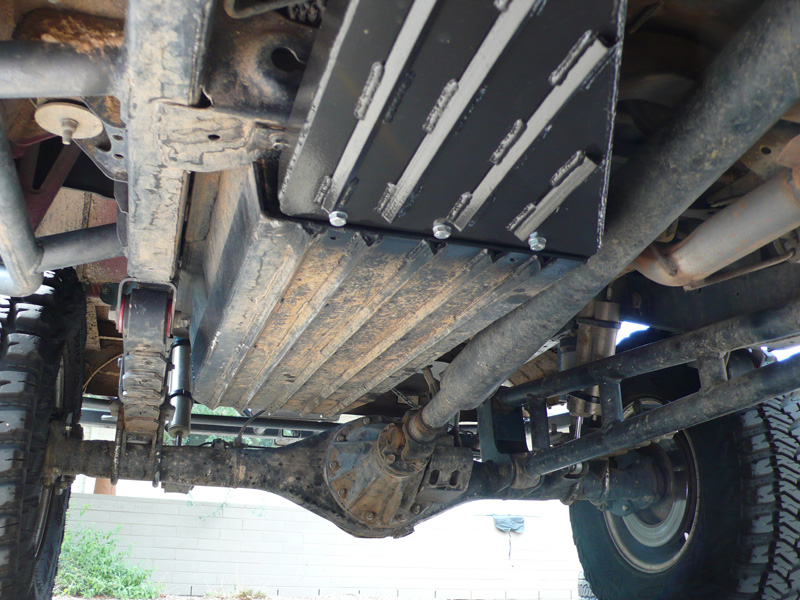 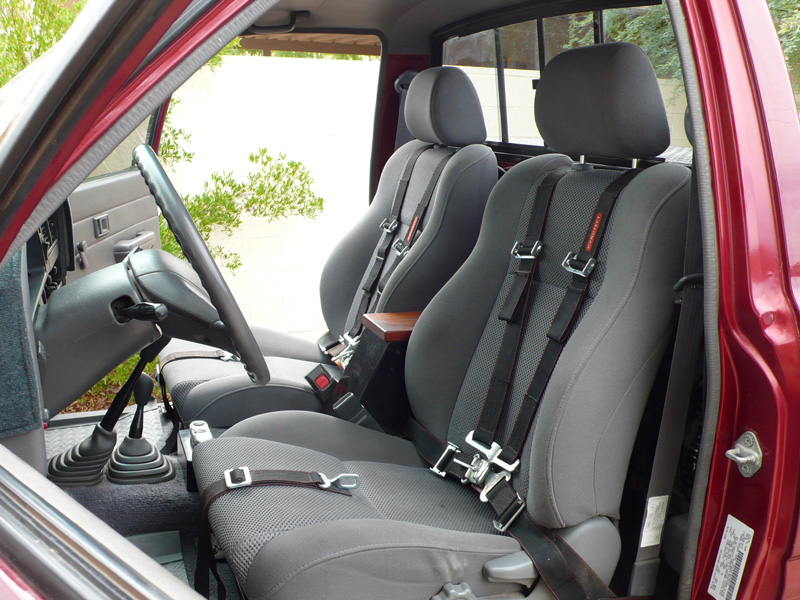 The interior looks just as immaculate as the exterior. Many parts were replaced with new OEM. The seats were upgraded to later, more supportive Tacoma units, with 5-point harnesses installed with a bar behind the seats to keep your floppy self in place as this thing trundles over bumps and crawls sideways up gigantic boulders. The 5-speed manual trans and transfer case were both built by Marlin Crawler starting with the strongest designs available in these trucks, the R150F / RF1A gear drive combo. 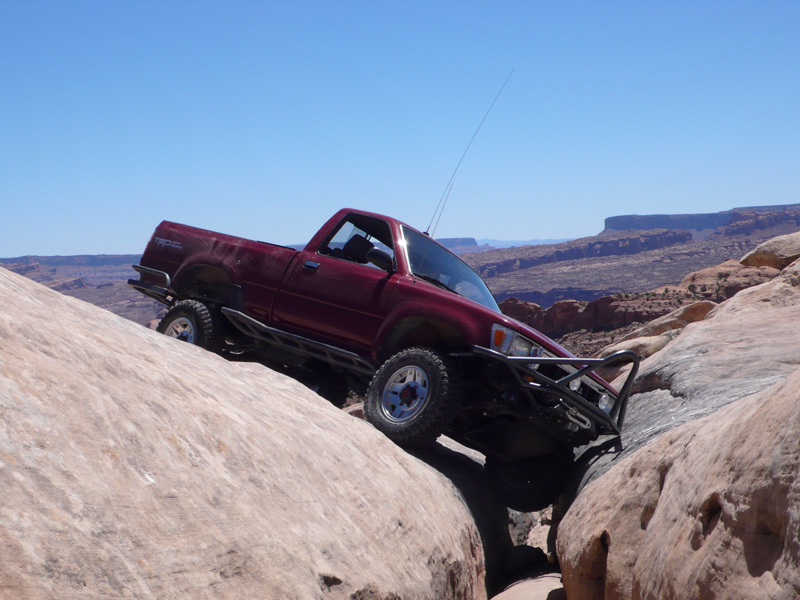 Pictures from several iterations of this truck are shown in the ad, but the best images are in this series showing it crossing the “Golden Crack” in Moab, Utah. 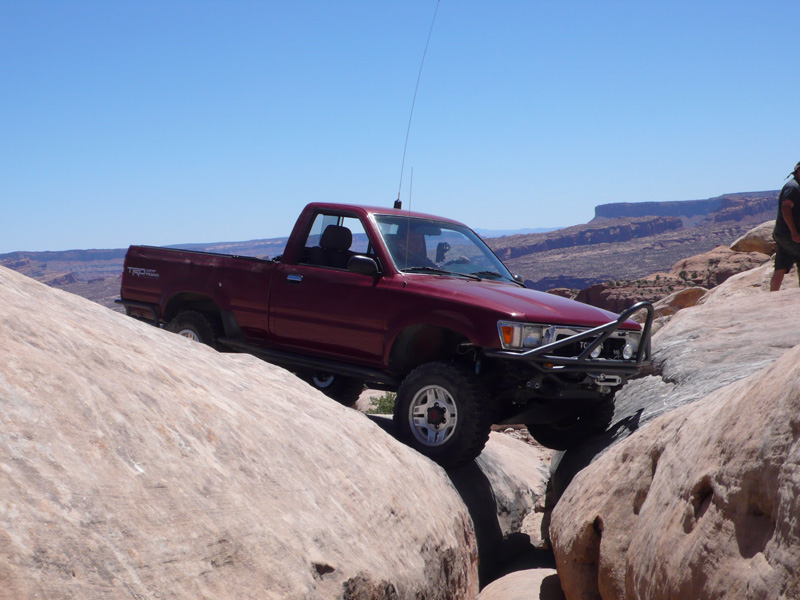 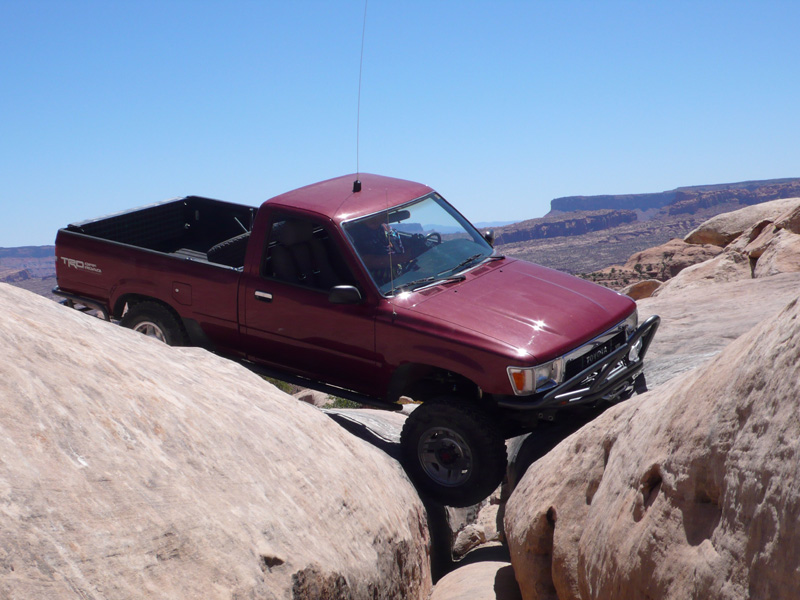 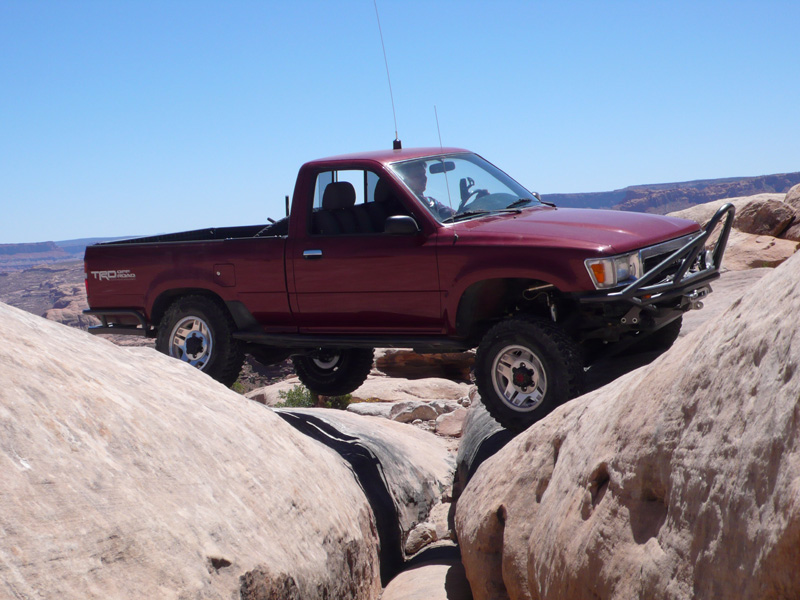 We can’t argue with that kind of capablity, even for $9500 considering the high quality of the build, the gigantic list of upgrades / rebuilt / refreshed parts, and the fact that the armor plating and tubular protection keeps this truck looking good even after extreme off roading. Our only reservation would be with the original  3VZ-E engine, a 3.0 liter V6 that is known for reliability issues and relatively low 150 hp output. The seller has recently performed extensive service & parts replacement on the engine, and the head gaskets were replaced in a factory recall, so this will likely be a decent example of the “3.Slow” if the new owner keeps up on maintenance. Crush a zombie, crawl a rock, haul some logs, drive it to work, road trip through the desert…this little Hilux could really do it all.

Find another clean crawler you’d like to see on DT? Email us here: tips@dailyturismo.com