Looking for a way to skin your knuckles fixing things that shouldn’t have broken, in between brief periods of motoring terror as you try to dodge Suburbans and semi trucks while getting windburn and sunburn simultaneously? Don’t want to look like a hairdresser or secretary while doing so? Then you need a Triumph TR6! Triumph is a brand that doesn’t get much press anymore – and for good reason – they have been extinct since the early 1980s. However their last “normal” looking roadster, the TR6, is still relatively common in the US. If you’re feeling a bit masochistic but are tired of cutting yourself with safety pins, check out this 1974 Triumph TR6 on craigslist in Santa Clarita, CA for $8500. 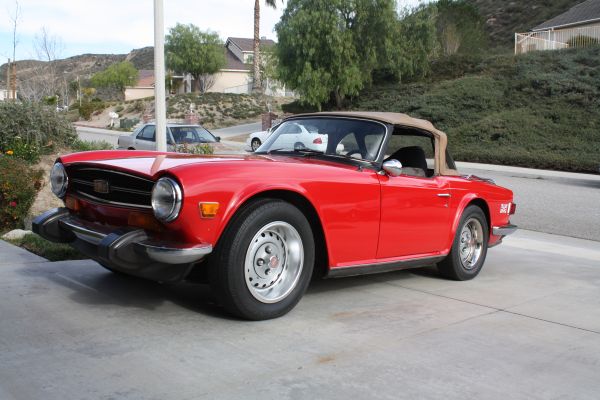 The TR6 was created in Britain’s dark and dreary ages of auto production, when Triumph was owned by the megalomaniacal British Leyland Corporation. BL swallowed up most of the stubborn old marques remaining in the UK and proceeded to badge engineer the personality out of their remaining unique vehicle lineups. At one point BL owned Alvis, Austin, Austin-Healey, BSA, Daimler, Jaguar, Land Rover, Lanchester, Mini, Morris, MG, Riley, Rover, Triumph, Vanden Plas and Wolseley. British Leyland attempted to “out-GM” GM, and in fact did so by becoming bankrupt and folding in 1986. In a move that preempted GM’s rescue by Obama, Margaret Thatcher tried to save the state-owned BL via restructuring. Recently Old GM sneakily became New GM, but back in the 80’s the lawyers weren’t that smart yet and BL was re-formed as the Rover Group. It eventually did die when its remaining brands were sold off to BMW – who is now considering reviving the Triumph brand according to the latest intel, perhaps as an Anglo chum to their captive MINI brand. Most likely not – back in the Cooler for you, Triumph! 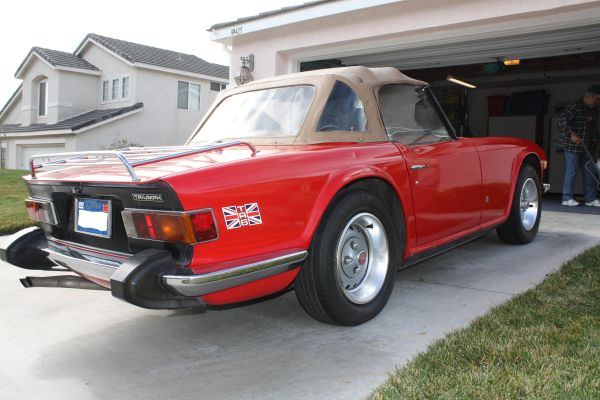 The TR6 was one of BL’s less-terrible creations – Top Gear doesn’t feel the need to drop pianos on it, unlike its unfortunate cousin the Austin/Morris Marina. The TR6 is so dyed-in-the-highland-wool bloody British that it proudly sports Union Jacks on the rear wings (fenders). This particular TR6 looks to be in good nick (condition) indeed, with a recently replaced hood (top), petrol (gas) tank, and new seals on the bonnet & boot (hood & trunk). No mention is made of the federally mandated pointed rubber bumper bazooms, but we would ditch these in favor of the pre-’74 cleaner look even though the car would become more easily crunchable. Let’s not kid ourselves here – crash survival shouldn’t be high on the potential TR6 buyer’s list. 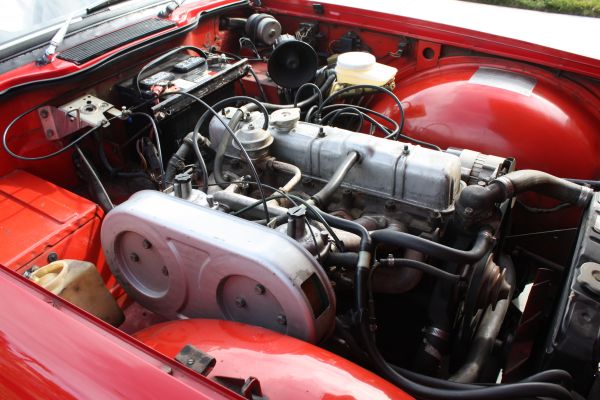 This carbureted 2.5L inline six was rebuilt in 1999, including a new head. 104 hp may not be enough to satisfy your inner Stig. But being a 1974 model year, this little chap is smog exempt in CA and would be easy enough to hot rod with some head work, a turbo (or two) and modern DIY EFI. In fact you should probably count your blessings that the US-market TR6 came equipped with a low power twin carbed engine instead of the RestOfWorld fuel injected version. Why? Well, that fancy state-of-the-1970s-art EFI system was supplied by none other than Lucas, the prince of darkness itself. You US buyers won’t have to worry about letting that magic smoke escape! 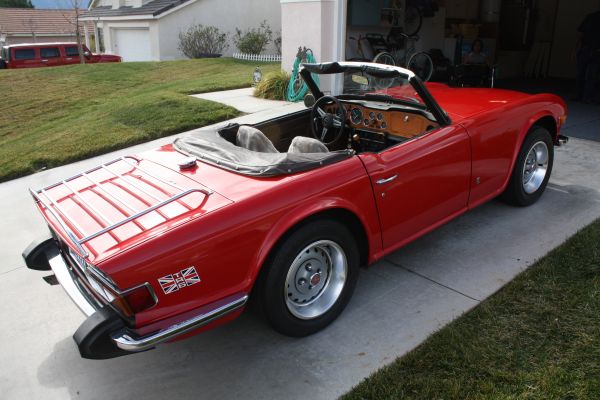 Even though the TR6 looks dated and odd by today’s standard, the Kamm-back rear and blunt front are clear indicators to passersby that this isn’t your gay uncle’s Miata. James May claims it was designed by the Germans (Karmann apparently) and that it’s a “proper bloke’s car.” OK, Captain Slow, we believe you, if “proper blokes” are keen on bug eye headlights, commercial-grade steel wheels, organic plywood dashboards and yachtlike chrome ladders on the trunk for rear entry. Hail Brittania! Does this Malaise-era limey need to be properly flogged on a B-road, or should you save your money and flog the dolphin instead?