If you need a ride to help you save the world from Megatron and the evil Decepticons, but don’t have a Michael Bay-sized budget for a 2010 or newer Camaro plus the prerequisite explosions, pileups and cheesy acting, you may want to consider this 1970 Datsun 240Z as an acceptable substitute for Bumble Bee. Start growing out your Jew-fro now, and work on finding a suitable Megan Fox stand-in if you want to live out the full Witwicky experience. You’ll want the car first though, available for $11,500 and listed here on craigslist in Santa Monica, CA. 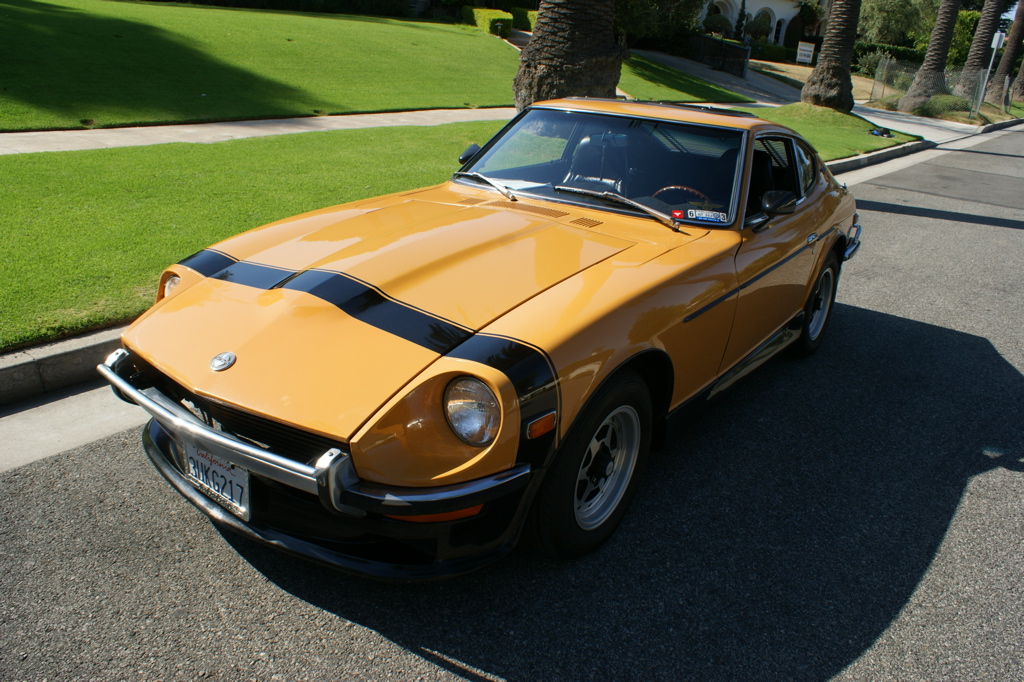 Okay, so maybe the color is a bit off, and there should be two longitudinal stripes instead of one transverse, but if you had to make friends with an older car this wouldn’t be a bad start. In fact this seems to have been bought new by a “Lt. Colonel” (armed service unspecified; could be Army, Air Force or Marine Corps) and just recently left his possession. Though the car is super clean, this story brings us to one of our largest pet peeves here at DT – we mean something that is just incredibly annoying and uncalled for – the classic “one owner” claim when the person selling the car is clearly not the original owner! Why do car flippers think that this is excusable? Guess what flippers: if you bought the car from the original owner, that makes you the second owner, and therefore it’s now a TWO owner car! Just be honest, chances are we will still like the car anyways. Now that our rant is over, we can get back to analyzing the Z at hand. Actually, we’d use the two-owner truth vs. the one-owner claim as a way to negotiate with the seller on price. But this one might be worth the haggle – in fact there are many parallels to the ’74 Toyota Celica GT we featured last month such as the “one owner” with military service history, the comprehensive service records since new, overall completeness and originality. Except we suspect this Z has been repainted at least once in its life. The seller mentions “very nice paint” but notice there is no mention of whether it is the original paint. In the pictures of the original build tag on the door jamb, yellow overspray is clearly visible indicating some form of respray, and we would suspect it was a full-car job. Either way, it looks sharp and is free from rust – a statement that is suspiciously absent from the aforementioned ’74 Celica ad… 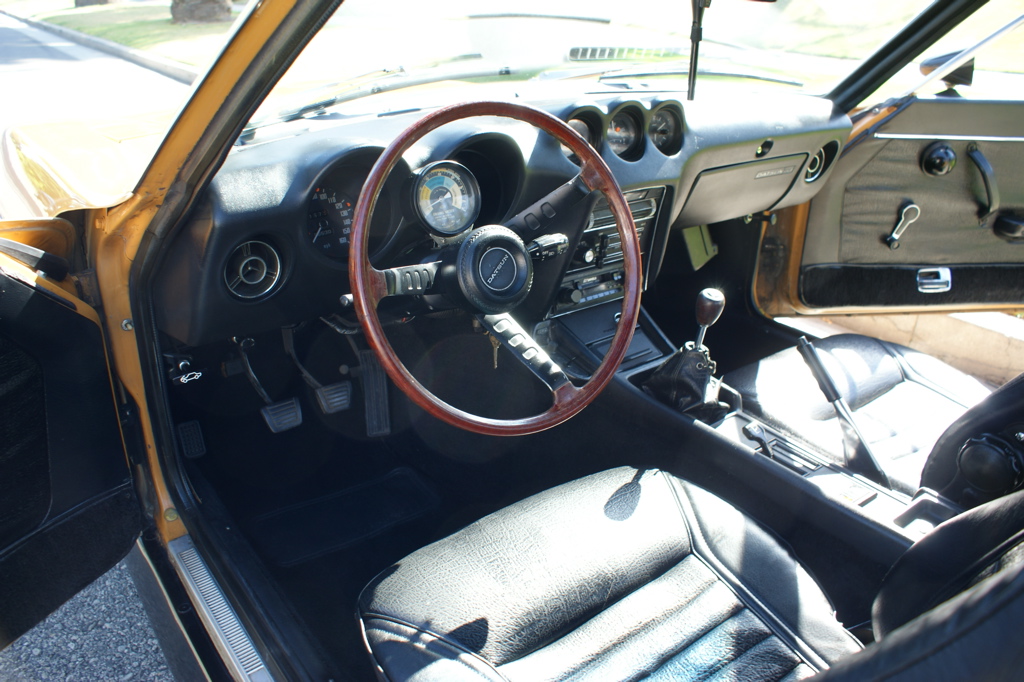 The interior of this bee is classic ’70s GT chic, and comes complete with integrated triple gauges in the center of the dash, deeply cowled speedo & tach in front of the driver (paralleling the original and latest Camaros), 4-speed manual shifter and what we think is some sort of vacuum/economy gauge mounted on the steering column. This is but one of many aftermarket additions – just from the pictures provided we count the front spoiler, side skirts and rear valence panel, rear bumper overrider bar, rear window shade, the vacuum gauge, split “T-top” style glass paneled moonroof, and last but not least the 6-spoke alloy wheels. If DT faithful readers can spot more add-ons, tell us in the comments below. 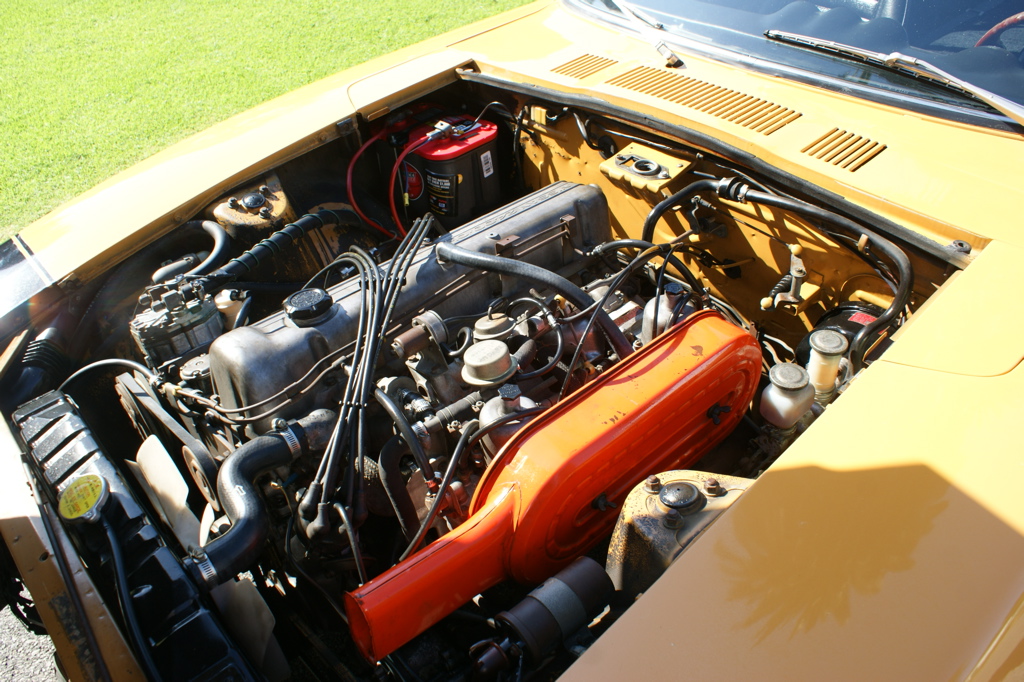 Under the hood (and the two flappy panel side access mini-hoods) of this HLS30 we can see a very original looking machine. This is the L24 inline six, a 2.4L cast iron overhead cam chugger that makes 151 hp and 146 lb-ft of torque. It’s a non-crossflow head, with the exhaust and intake both on the driver’s side, which makes the compartment quite crowded there. Carburetors look like British SUs, but they are actually Japanese Hitachi carbs which are very similar in design. The bulbous domes contain the ‘dashpot’ pistons that    control sliders behind the throttle butterfly valves. These are vacuum actuated and work to smooth out the torque curve and maintain finer control over air-fuel ratio vs. simpler single-barrel units without dashpots. We like these early Zed cars here at Daily Turismo – they are lightweight, good looking, independently suspended at both ends and are now considered modern classics. We’ve even ridden in several V8-swapped 240Zs that gave whole new meanings to the term “pucker factor”…they were waaay faster than we were comfortable with as passengers without any illusion of crash safety from the svelte Japanese body surrounding us.

What do you think – does Bumble Bee look better as an import from the Land of the Rising Sun? Or would you prefer big nasty ‘merican muscle instead?

Please, spam us with any kooky old car ads you can find here: tips@dailyturismo.com