Vintage racing can be very expensive – its a playground for big bucks comedians and retired rock & rollers.  The price tags for vintage race cars is often more than us ‘working folks’ make in a year – but not on daily turismo.  This 1964 Chevy Corvair is for sale on ebay for a buy-it-now price of $9500 and has actually been sold at least once in the past year and highlighted by Bringatrailer.

1964 was the last year for the first generation Chevy Corvair and the tricky prone to flip suspension of the 1960-63 models had been fixed  (2 years before Ralph Nader’s scathing review of the automotive industry “Unsafe at Any Speed” was released in print.)  This particular model has had major suspension work to set it up for Vintage racing – so don’t expect any swing-axle related flipping to occur – just normal race incident flipping.  Honestly the only flipping this car is likely to do is via ebay or craigslist. 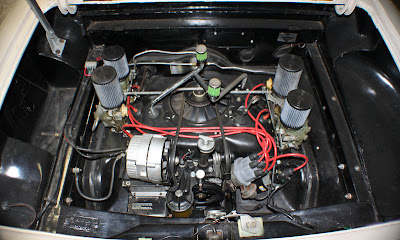 The air-cooled flat 6 mounted in the rear has been replaced with a souped up 2nd generation Corvair engine with some overboring and cam work – something like 200 horsepower -give or take.  The car has been gutted and is claimed to weigh 2314 lbs – so expect it to be fun on the track.  It has a 4 speed manual trans mated to the engine via a “keviar” (a combination of Kevlar fiber and caviar – sounds expensive and tasty!) clutch. 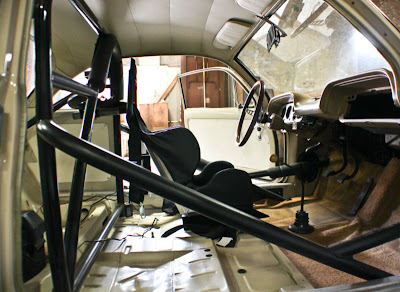 The interior has been stripped for racing and a rollcage added for the inevitable roll overs — but it retains the headliner to keep cool from the sun and avoid the boom-box-echo-chamber-of-death effect that plagues most hardtop racecars.  Its amazing how much of a difference 2 lbs of headliner and carpet can make in driver comfort.

Overall the paint and body look great for the price – one does have to wonder why the car is up for sale so soon after purchase?  The seller maintains that it is still street legal -and we’d drive this thing on the street in a heartbeat!

See another car that should be in Jay Leno’s garage?  email us here:  tips@dailyturismo.com