Apparently we here at DT like to feature unusual versions of one of the most utterly common vehicles of all time. We haven’t yet featured a standard Volkswagen Beetle, but we did make jokes at the expense of an electric Karmann-Ghia project, an open-air Type 2 Bus with Pinto power, a Thing, and a Beetle/Fiero/trike monstrosity. Not ones to muddle with a good thing, we’d like to continue this parade of oddball rear-engined Germans with a So-Cal surfer style custom “woody” wagon that we are inexplicably drawn to. Perhaps it’s because this is the cheapest classic woody we’re ever likely to find? Check out this 1956 VW Beetle woody wagon in San Diego, CA here on The Samba classifieds for $12,500 “or trade for Porsche Speedster kit car.” 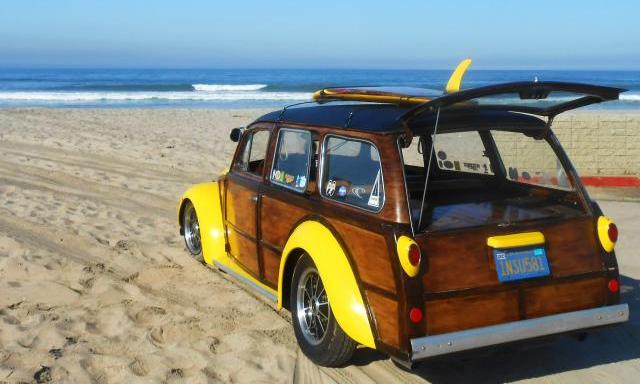 The VolksWoody looks surprisingly well finished for what it is. If someone had described the idea to us without providing pictures, we would have pictured an ill-conceived ungodly mutant abortion, with all sorts of random hacked-up body panels and splintery plywood protruding in every direction. However it seems as if the builder had some forethought and skill, because they managed to pull off a very interesting and honestly good-looking custom creation. 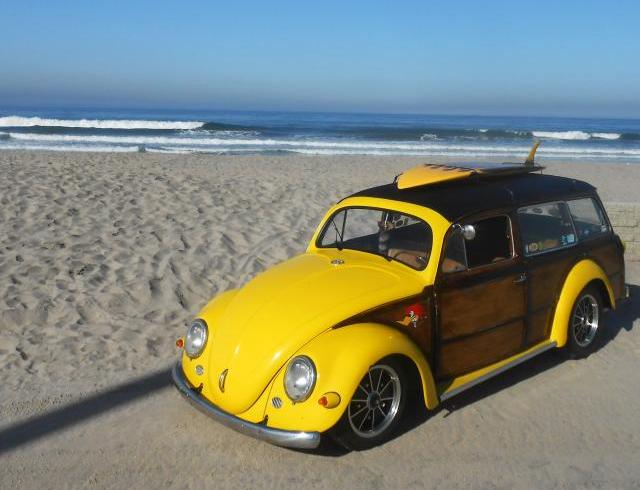 We are not the biggest fans of the yellow paint with the dark wood color scheme, but that can be changed easily enough by the next owner as there isn’t much body colored steel to deal with. It is unclear whether the exterior side panels and doors are actually skinned with wood, or simply have woodgrain patterns painted on. The rear upper wagon roof section looks to have been taken from a VW Type 3 ‘Squareback’ 2-door wagon; at least the side and rear windows do, and possibly the rear hatch glass as well. We are surprised that the squareback’s dimensions and roofline matched the Beetle so well; then again, maybe it didn’t – hence the black vinyl top panel to cover up the surgery scars. To be fair, American woody wagons from the ’30s and ’40s used similar grained vinyl tops. 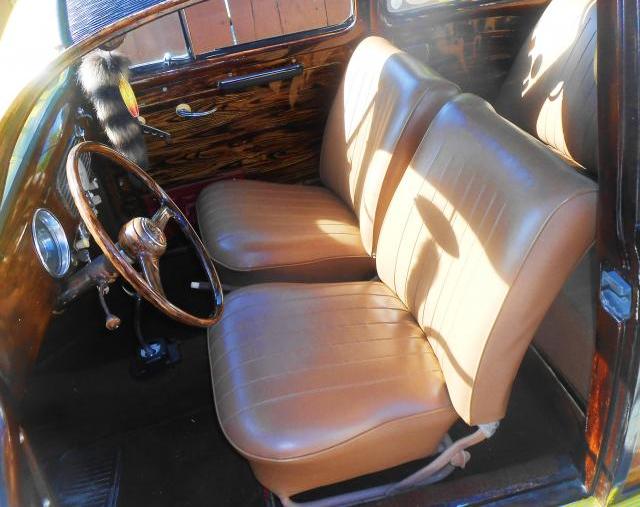 Peeking inside we can see that this longboarder’s dream did indeed start life as a mid-’50s “oval window” Beetle, as indicated by the large rectangular speaker panel in the center of the dash and the 2-spoke “bat wing” steering wheel. The dashboard, steering wheel and door cards all seem to have been painted with a simulated woodgraining technique, which is a bit over the top and might look better in the same color as the front body panels. If the new owner were to do some repainting (inside & out) we would suggest a classic VW shade from this era: Coral Red. It would be both period correct and theme appropriate…coral, woody, surfboard…beach…get it? 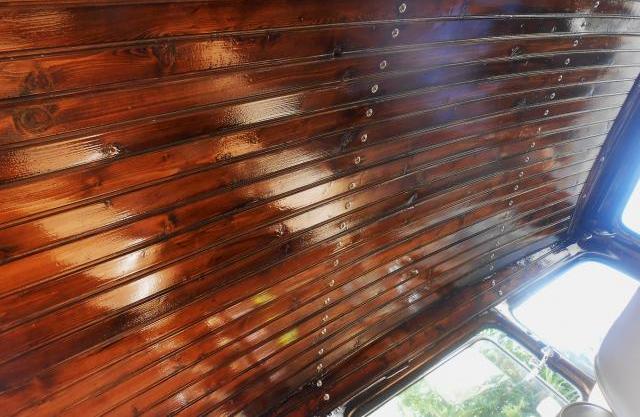 A very cool touch is the thin slat wood headliner which reminds us of lath (as found under plaster in older homes) but also of Ford woodies from the ’30s which used them as well. In the Fords and similar wagons however, the wood strips were the actual roof structure as well, and the outside vinyl was stretched and tacked over the wood. Here, we suspect they were added to the interior of the modified VW steel roof panel. We cannot be sure because the seller gives almost no detail about the build, including who converted it to a woody, and when. 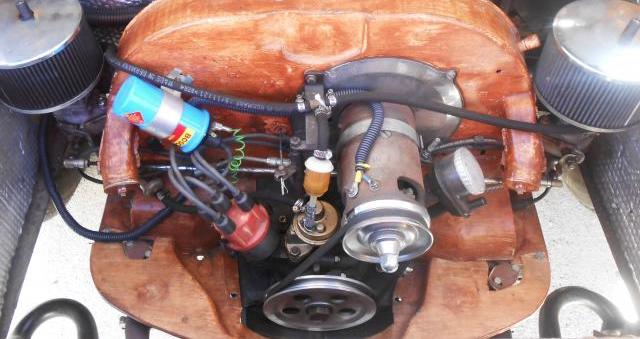 The wood theme continues under the custom rear engine cover to the cooling ‘tins,’ which every aircooled VW needs to survive. Again we think this might be pushing the theme a bit and we’d repaint them to a solid color if it were ours. We would also create a horizontal panel with a rubber seal to isolate the engine compartment from the world below; VW aircooled engines need fresh air from above for cooling and induction, and exhaust the heated cooling air downwards. Without the separating panel and seal, the engine is forced to breathe hot air for cooling and induction which is less than ideal. We do not see outside air intakes on the rear panels (like the Squareback has) so we suspect the bottom was left open because it was the easy solution to the problem of air supply (not the band!).

Another big VW no-no is obvious here as well; the clear plastic fuel filter should not be in the engine compartment as they are known to become brittle and fail due to heat & age, spraying fuel all over the hot engine and leading to fires that are all too common. The flat four does look neat and tidy however, and we suspect it runs adequately with the Bosch blue coil, twin carb conversion and mechanical advance distributor. 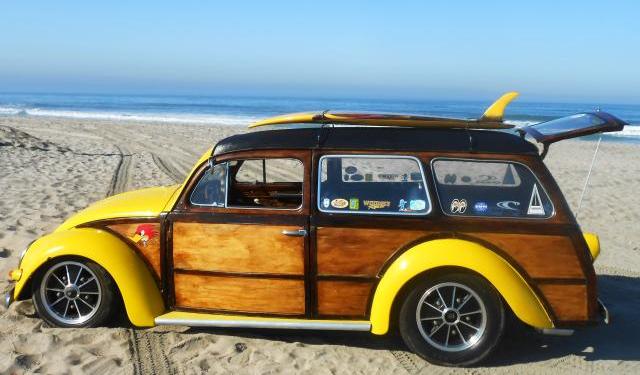 Other neat details on this bargain priced lumberwagen are the Japanese Flat4 BRM alloy wheels, and airbag suspension giving adjustable height and a smooth ride. We dig the hot rod & surfing decals on the windows, along with “Mr. Horsepower” himself on the front quarter panel. The seller does not mention if the surfboard on top is included, but it is color-matched to the car so we would bet it could be part of the deal. The running board rubber covers are yellow as well which is a cool touch.

This little guy would be a great bargain alternative to the ’30s – ’40s Ford woodies that are now worth at least 10x this price in many cases. That’s right – over $100k for a vehicle that was designed for utility and bought by broke surfers in the ’60s because it was cheap and large enough to hold boards inside. This VW has to carry them on the roof – it’s quite a bit shorter, you know – but will definitely be the only one of its kind down at Huntington, Doheny, or Waimea Bay!