In case our readers haven’t noticed, we have been on a bit of a ’50s Americana kick here at DT recently. Wednesday (actually “Wodensday” aka Odin’s Day…more Norse mythology…help us…) is no different! Time for another clean Ford from the Eisenhower era – after he had hung up his General’s stars and started fighting the Commies, that is. We are a sucker for a clean old Ford, and think Ike would have liked this 74,000 mile, tidy stock 1954 Ford Customline “Tudor” sedan for sale here on the HAMB forum in Jefferson, Wisconsin for $8495. 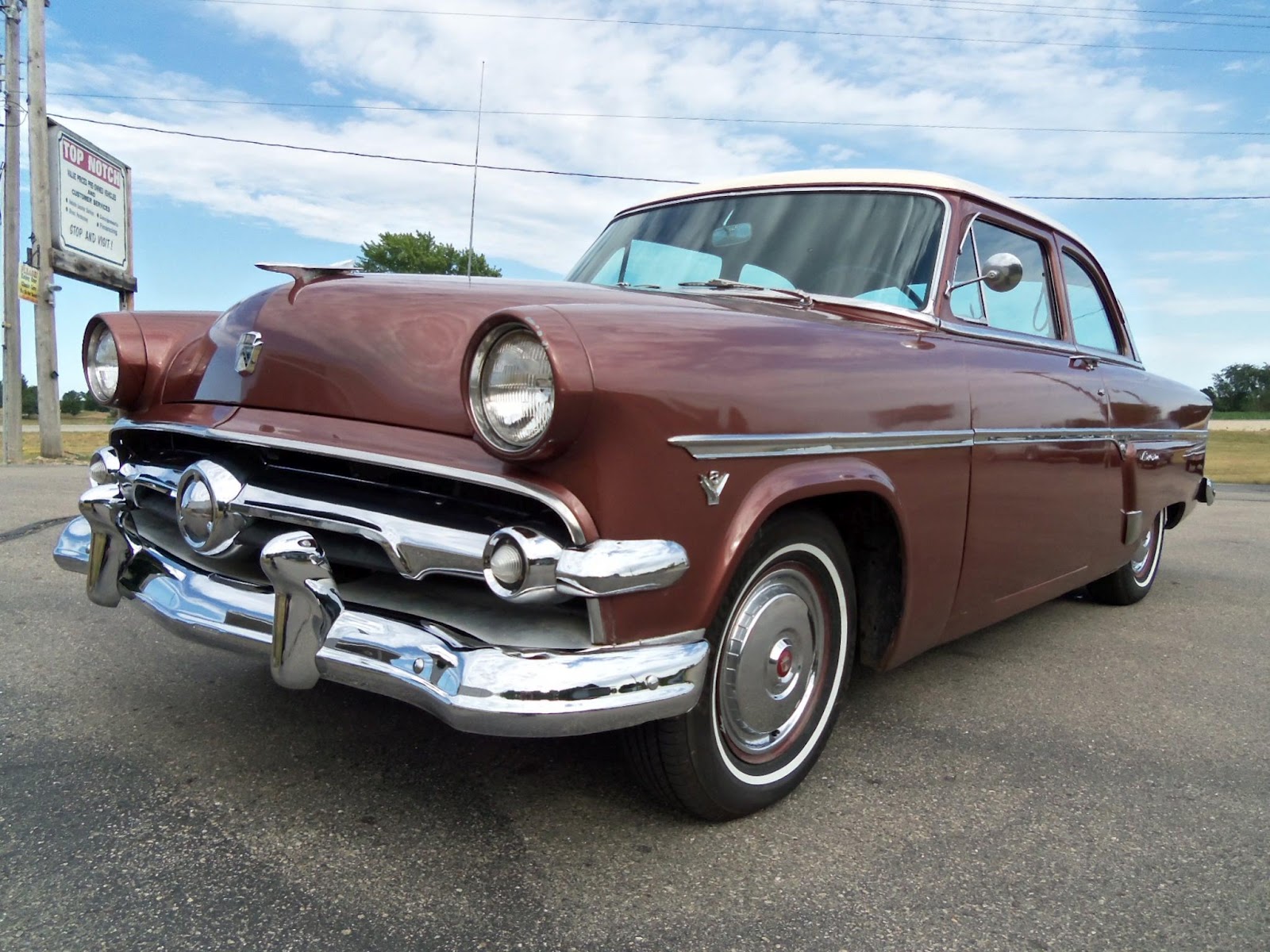 The 1954 Fords were largely a carryover design from ’53, which was mostly unchanged from the ’52, so this body shell was getting “old” in its third year of production – by 1950s Detroit standards. As a company, Ford resisted GM’s invention of planned obsolescence for quite some time. They would keep the same basic body and frame design for several years with minor styling updates and different options. Buyers expected new cars in 1955 showrooms though, so this car was the last of its breed. Although new for ’54 there was a ball-joint front suspension – no more creaky kingpins that needed regular grease jobs and wore out quicker than a saw blade made of balsa. 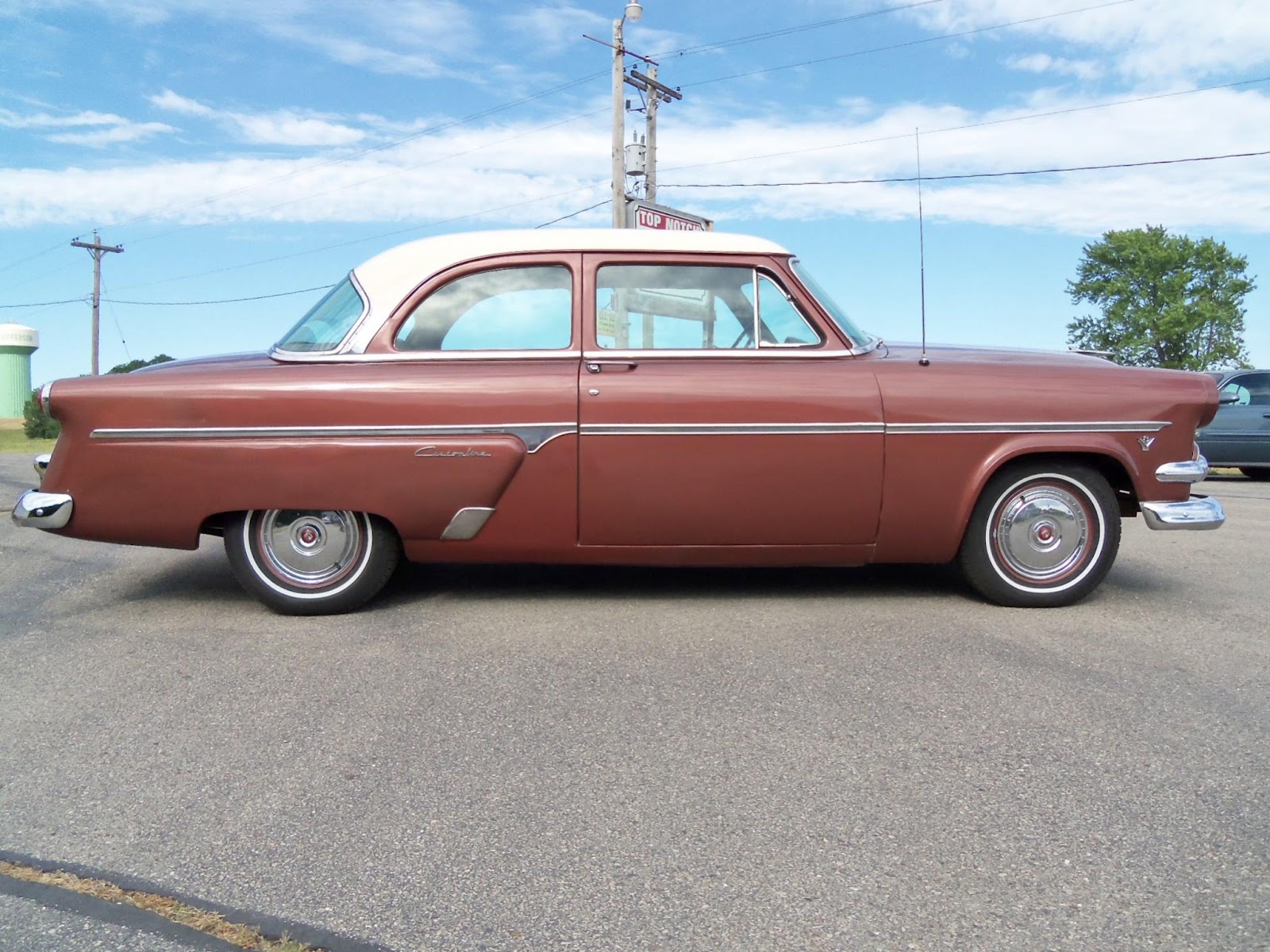 Mid ’50s Fords are often overlooked today in favor of their ’49-’51 predecessor car, the “Shoebox,” but with the right color schemes they can be very clean and classy, albeit somewhat plain…we think this makes them more pure though, if they aren’t modified with polished billet wheels and painted in terrible purple with turquoise raindrop ’90s graphics. This car is nice and stock, and has been repainted in its original two-tone “Lancer Maroon” with “Sandalwood Tan” top. This is a color combination that foreshadowed the vinyl-topped Brougham craze to come…almost like a pastel version of last month’s 1974 Toyota Celica GT. 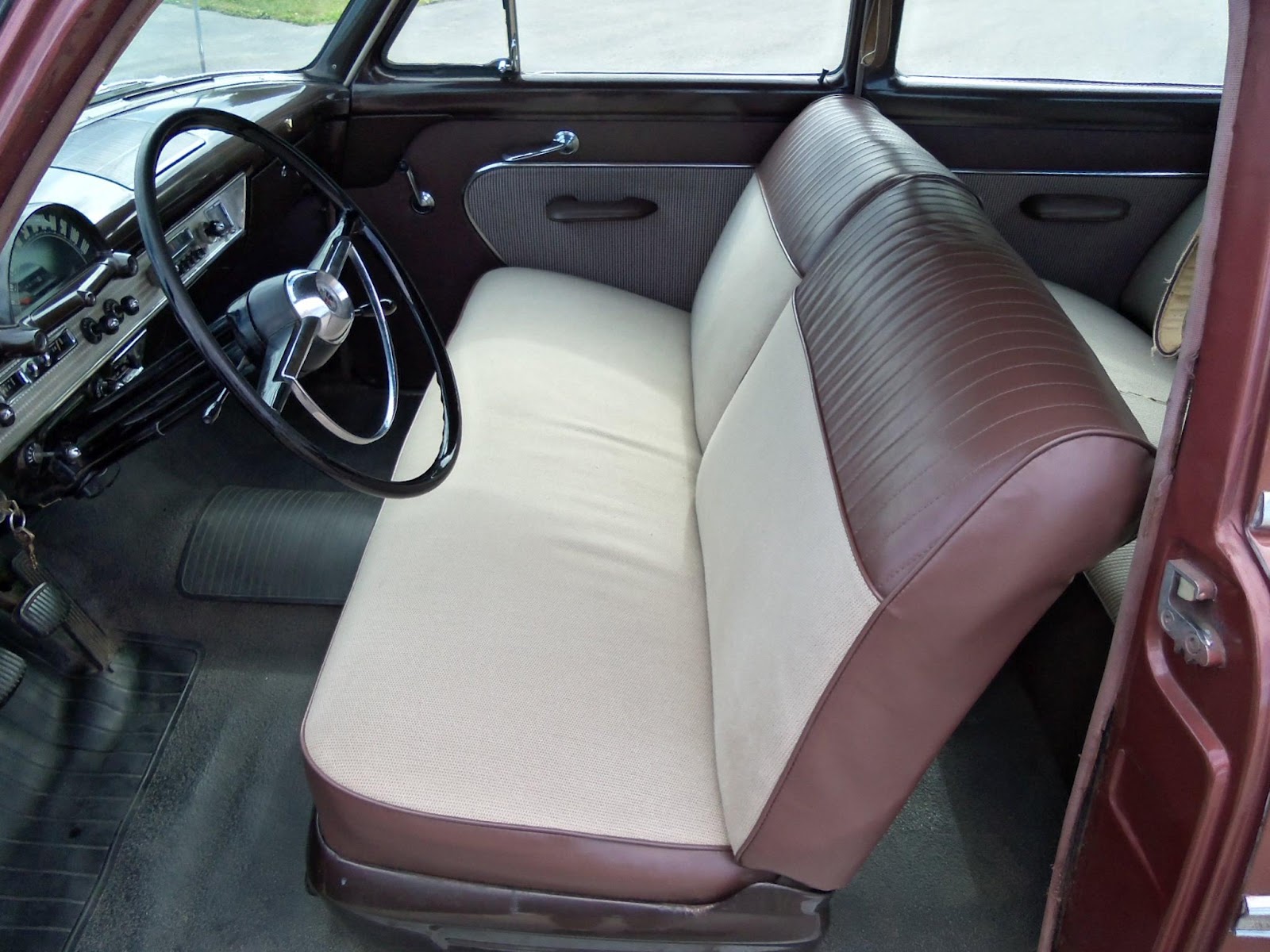 Imagine sliding yourself in on that wide vinyl bench seat, favorite Fedora perched on your noggin, maybe a nice cigar ready to be lit…just don’t mash those non-assisted drum brakes too hard, or that hat will have to do double duty as a helmet. No seatbelts in this time machine! On the bright side, the dash is simple and un-cluttered compared to some of the designs from a few years later, so the imprint in your skull will be easier to remove. That huge thin-rimmed steering wheel should absorb some crash energy too if you hold on too tight, but watch out for that rigid column in the center. Isn’t automotive safety a fun topic? 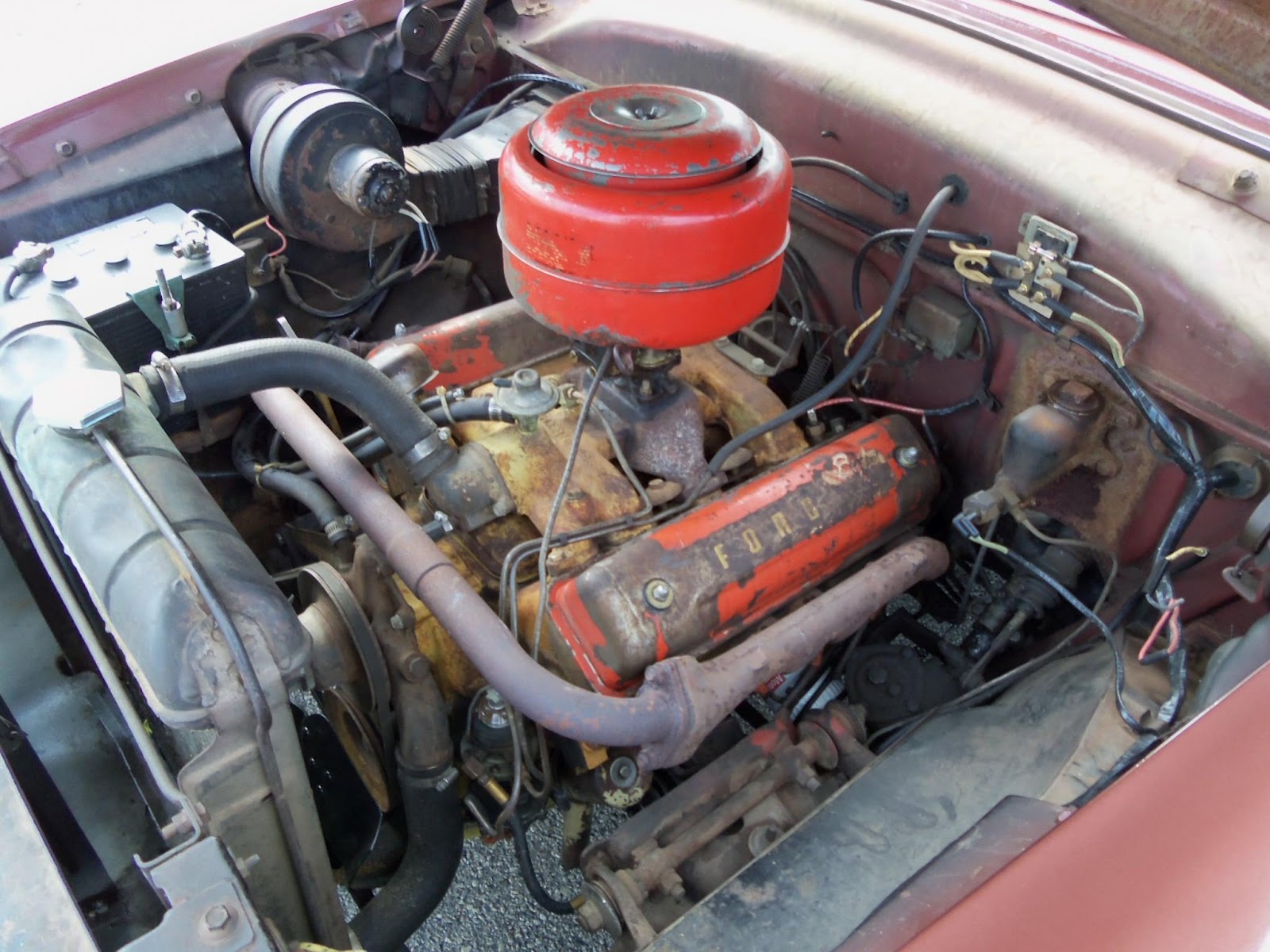 Under the hood our featured ’54 needs a bit of cosmetic attention, although it will be up to the next owner to decide if “original engine paint” is something worth preserving…what’s left of it, that is. Another big change from ’53 to ’54 – this is the 239 cubic inch (3.9 liter) Y-block V8, which was Ford’s first overhead valve design and the direct follow-up to the venerable Flathead V8 that had just gone out of production. The Y-block name came from the shape of the block skirt; the lower portion extends down past the crankshaft centerline for added rigidity. A nice touch from Dearborn’s finest, and perhaps one of the reasons these engines just keep on chugging along even today. 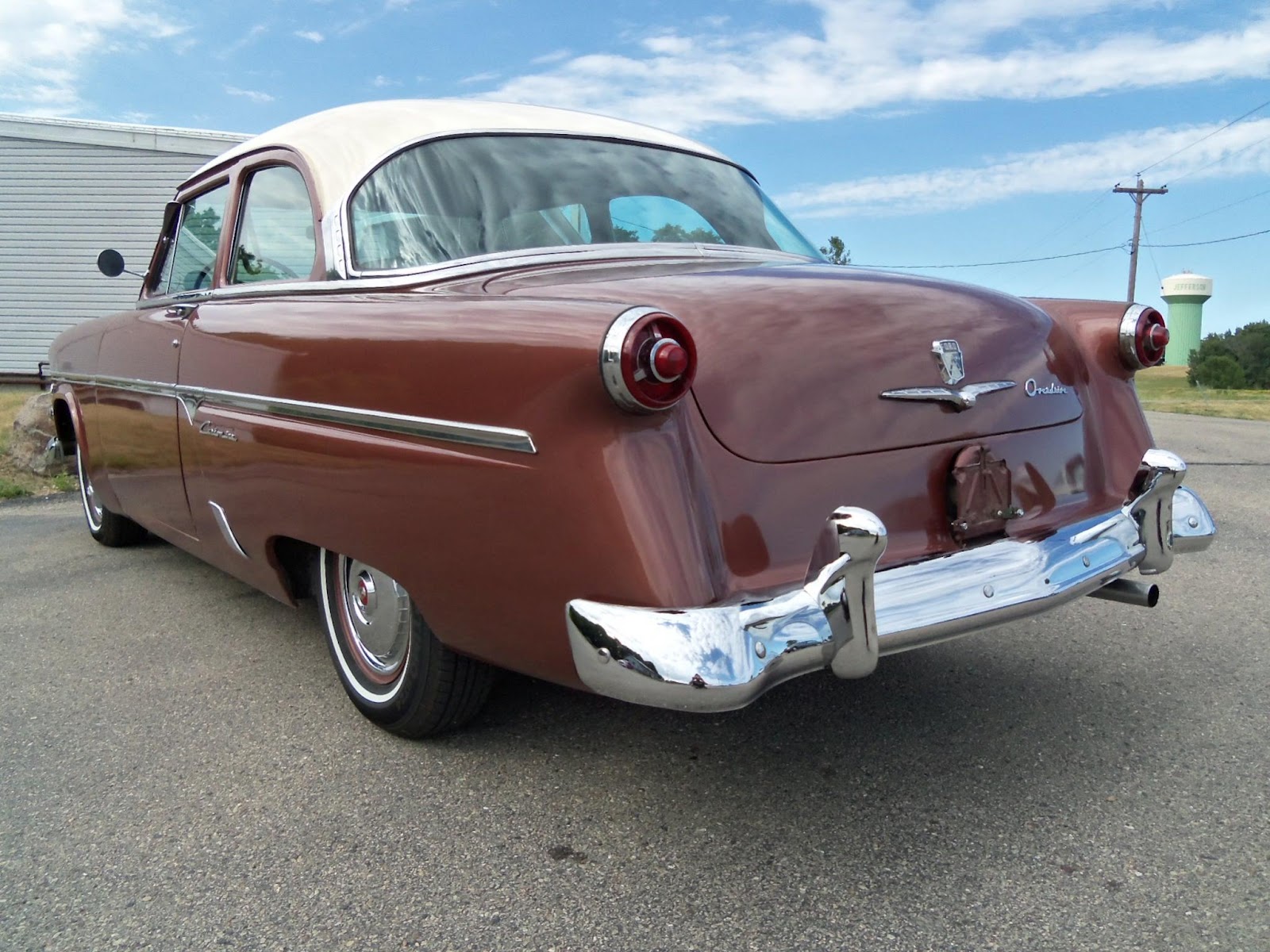 This 239 was only rated at 130 hp but another feature was an oversquare (bore > stroke) design, leading to lower mean piston speeds and less friction – again contributing to longer engine life. Check those rocker assemblies though, since these early engines had oiling issues. If it’s in tip-top condition, we bet this engine would sound dandy burbling along at just over idle on your next cruise to the malt shop or drive-in theater. The three speed manual with selectable overdrive should enable it to loaf along on the today’s freeways too.

Gee willakers, would you look at that; we’ve reached the end of this fifty-four Ford feature. If you’d prefer to be met by an apron-wearing wife just taking a fresh meatloaf out of a nifty new all-electric pushbutton oven when you proudly arrive home from work every day, this might be your ride!

Want us to feature another ’50s Ford, or even an Edsel? email us here: tips@dailyturismo.com