As mentioned in our post of a great looking 1971 W108 280 SEL 4.5 last week, ebay frequently serves only to confuse market watchers, rather than bringing any clarity to car prices. The reason for this is simple; auctions are put up by sellers who are fishing for unrealistically high prices, hoping to catch an overly emotional buyer. As their reserves are never met, the more prudent ‘watchers’ are left wondering what it would have taken to actually buy the car.

In the case of the (1970-1973) W108 280 SE and SEL 4.5’s, it appears that because these are great cars, their sellers have high expectations that these cars will sell in the upper reaches of Daily Turimo’s range (at $12-15K) when, in reality the nice ones appear to be in the $6-7K range. While this makes them great candidates for DT daily drivers, many of their current owners may still be hoping to pull a rabbit out of someone else’s hat. 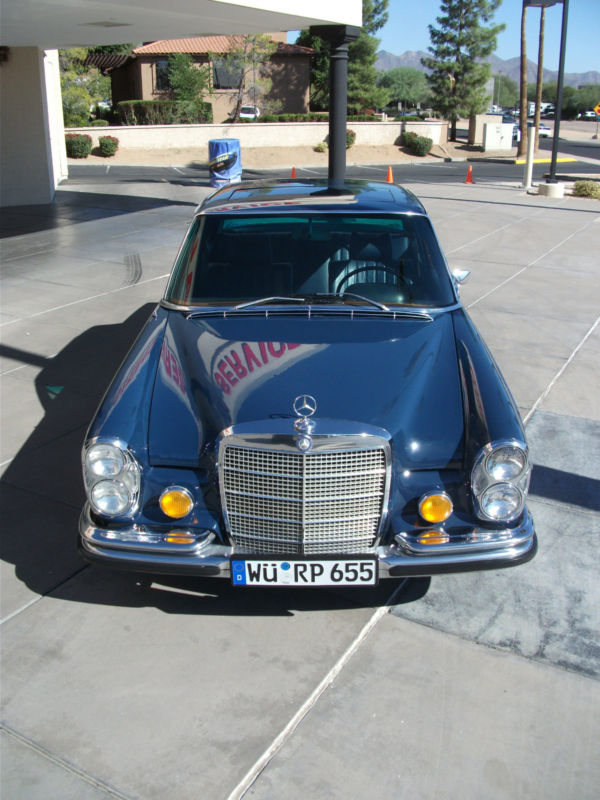 The Blue/Blue color combination of the car above is certainly desirable and its overall condition appears to be outstanding. Mechanically, the 230HP 4.5 V8 was overhauled within the last 3,000 miles and a sellers include a lengthy list of recent maintenance items, which is too long to include here, but which should assure the purchaser of many miles of enjoyment before another round of major repairs.

The interior of this car shows very well, with all of its bits in good shape. It also has the more desirable floor shift automatic. The sellers provided several interior shots, but most were taken too close to the subject, thereby requiring the prospective buyer to mentally stitch them together. The shot below shows the car was running at the time the picture was taken and that the wood trim appears in good order. Other shots indicate that the MB-Tex seats and carpets are in excellent shape. 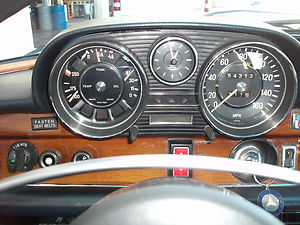 It’s worth mentioning that by following the links in their ad, the seller apparently operates as a multi-faceted car servicing facility which includes a body shop, professional auto detailing and tire/wheel sales. The only reason this is mentioned here is that they may have bought this car in rough condition and have refurbished it for resale, or brought this car back from the dead (or near dead). Either way, they have pretty solid ebay feedback ratings which include the recent sale of a late model Corvette (they’ve been around the block, so to speak).

When a car is offered by a “pro”, I typically try to find another listing of the car. In this case I checked their website www.CarGuysofScottsdale, but was unable to determine what THEY think the car is worth.

Now, let’s talk market price: We’ve commented in the past that a seller’s first auction usually brings the best price unless something with the car, the ad or the market has changed. In this case, the only things that have changed (including the ad itself) is the passage of 70+ days.

Normally, I would expect this car to stay right around its previous $6600 high bid; however, based on the good showing of the $7,000 bid (which failed to clear the reserve) on the tan car shown last week, as well as some other MBs that have drawn interest on Ebay, this blue car may stretch to $7,200. If it closes at or near $7,200 I believe it SHOULD be sold. But, I’m not the seller. As this car is in the hands of an automotive related (profit motiviated) business, the real question is whether or not it can it be sold (at a profit) by the seller, especially if we assume the current seller is the one who invested in the engine overhaul.

**Man, am I really hanging my assumes out there, or what?! But hey, at least I haven’t gone so far as to posit that this car has been used by his wife as a daily driver, and that she now insists that she must have the longer wheelbase 280 SEL to chauffeur her dogs around.**

As the seller only had enough post-overhaul change leftover to invest in Hankook tires (not a brand normally chosen for this type of car) I suspect the seller is ready to make a deal.

Let’s move on to some cars that have sold recently:

One of Ebay’s better known dealers, MotoExotica closed two ebay auctions in December on W108s. One was an SE and the other an SEL, both were equipped with the 4.5. I like MotoExotica because they deal in a wide range of brands/types and maintain a decent website which shows what some of their cars have sold for. Relying upon their site and ebay’s own database, I was able to find the following:

On Dec 9, 2012 MotoExotica closed an auction at $6,300 on the well kept 1972 280 SE, shown below. It wore its original (if somewhat less than masculine) baby blue exterior, had the less desirable column shift, but had extremely low (albeit uncertifiable) mileage of 67,000. This car was in very good overall condition, with a light patina of honest use. There was slight bubbling of the wood trim and an almost imperceptible dent in the front grille. This car could be considered the ‘average’ car. 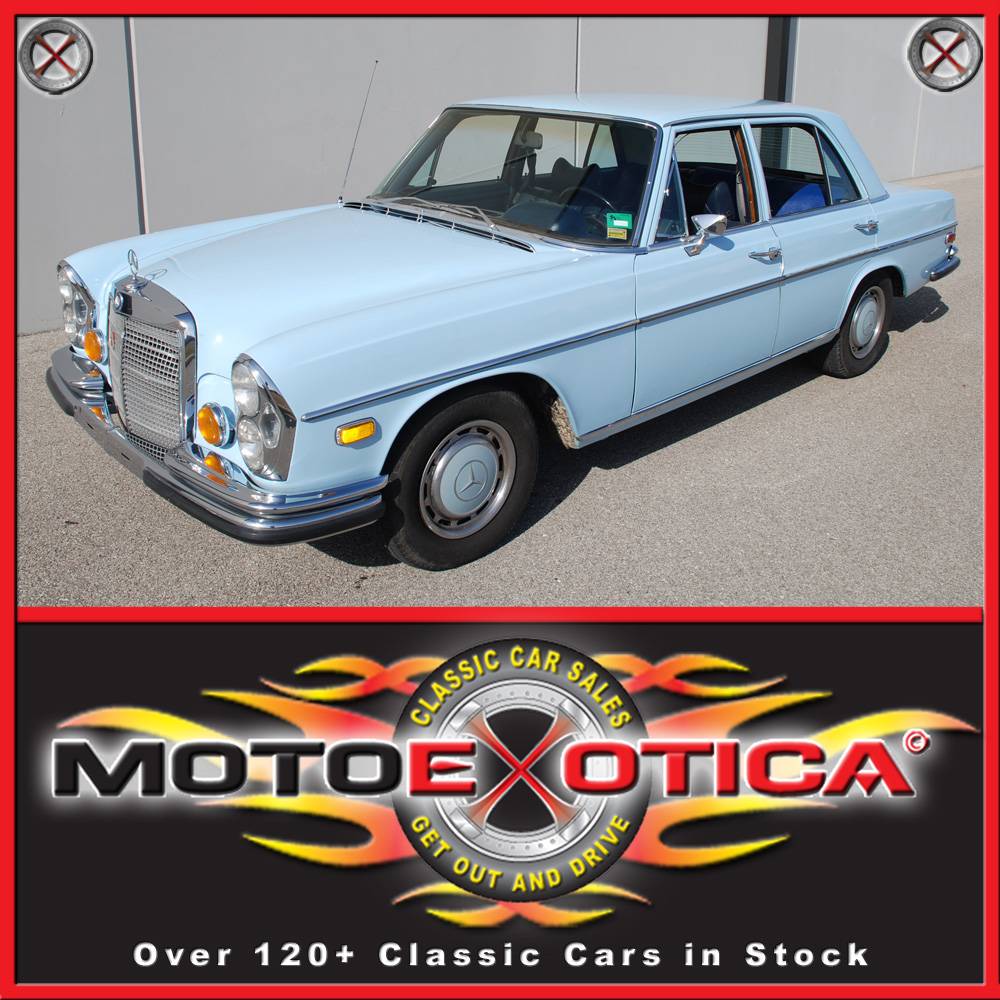 At the time it closed, it appeared that the reserve had been met but I haven’t been able to find any ebay feedback related to this car. MotoExotica being deservedly proud of their cars and their ebay reputation, maintains a fairly inclusive list of their cars which are currently in inventory as well as sold units where I found a picture of the car in question.

280 SE vs 280 SEL- Purists will debate the merits of the shorter wheelbase and the limited production time of the SE as the car to own, just as the owners of say a ’74 XJ6 Saloon contend that their car handles far better than the XJ6L. This is a debate that goes all the way back to the introduction of Buick’s Century line, with one distinction. In the case of the Buicks (stop your yawning!) at least the Centurys used the shorter wheelbase of the Special Series and were blessed with the higher horsepower ratings of of the same sized engines found in the Roadmaster and Super. That’s not the case with these cars…so, one could argue that a 1972 SE and SEL of comparable condition should bring the same price.

Less than two weeks ago, this 1972 280 SE 4.5 appeared as a classified on ebay for $6,400. In this case, the seller cleverly includes what appears to be a ’62 220 SE Coupe looking quite lonely in the garage, without its stablemate. 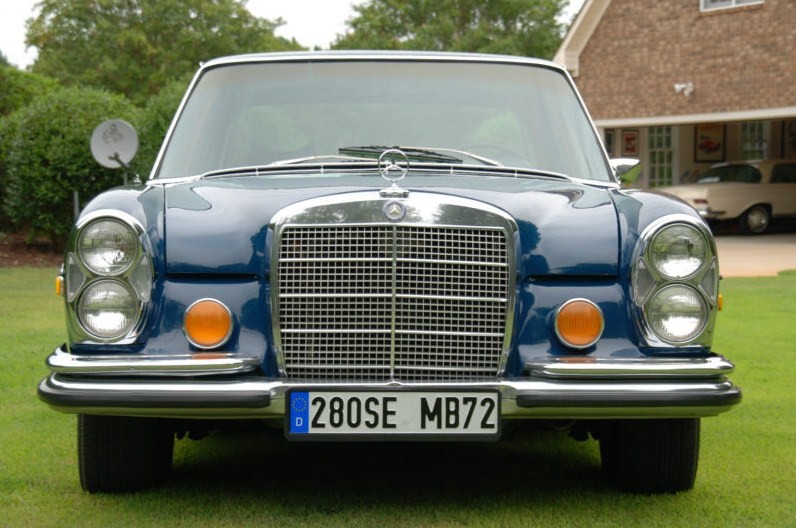 Even though the car above appears to be a near clone of the car currently up for bid, a quick check of the authentic license plate indicates that they are just distant cousins (In this case the cousin lives in sunny Greenville, South Carolina).  This car has some issues that were disclosed as needing attention. There is some rot in the floorboard under the left rear passenger seat, the AC is inoperative and there are some paint cracks which are shown in the linked pictures.

Given the market, I was initially a little surprised by this car’s price of $6400 given the repairs waiting for the next owner; until… Catch of the Day # 2… the car suddenly re-appeared on ebay under a different item number and sold for $5,750. Given the minor rust repair needed in floorpan, which could be undertaken without any effect on exterior or interior appearance and considering that it’s another high color car (albeit with some cracks in the paint) with the right equipment, the owner’s acceptance of $5,750 makes me believe that both the seller and buyer received a good deal.

So, what does it take to buy one of these cars? This quick (and admittedly limited) mini-survey of sold cars on ebay indicates that $6,500 – 7,500 ought to buy an absolutely beautiful one, but as pointed out at the top of this piece, the market (at least on ebay) is cluttered with examples like this admittedly gorgeous 1973 280 SEL 4.5 offered by just down the street from the car shown above. Another Greenville South Carolinian seller listed his car, along with a slew of receipts for over $25K. Catch # 3….there was but one, lone, opening bid, of $15K with no sale (wouldn’t a first bidding buyer normally try to steal it with a $3,000 opening bid and wait to see if anyone else is out there? Nah, jump right in at $15K! Hmmmm.). 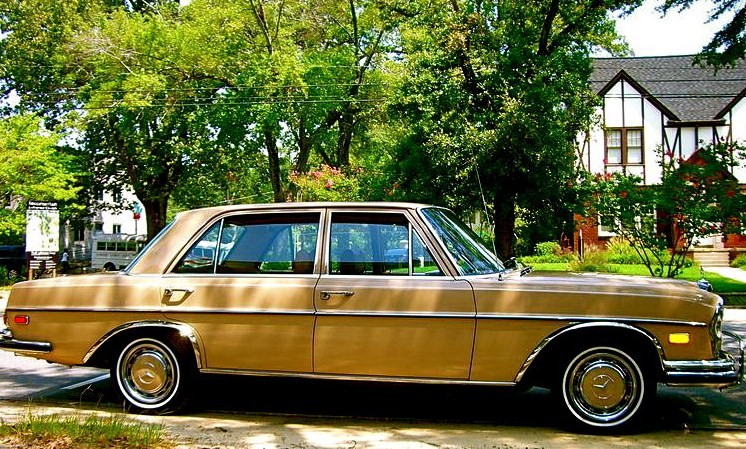 The pictures of the above car were not that great, as this car is apparently the same tan color as the 280 SEL featured on DT last week. But, in an effort to sell the car’s street cred, the seller included a shaky picture of the speedometer registering 90mph with 45psi oil pressure and a decent engine temp. He also wanted to let all buyers beware know that this isn’t his only Mercedes and that he really doesn’t need your hard earned cash! 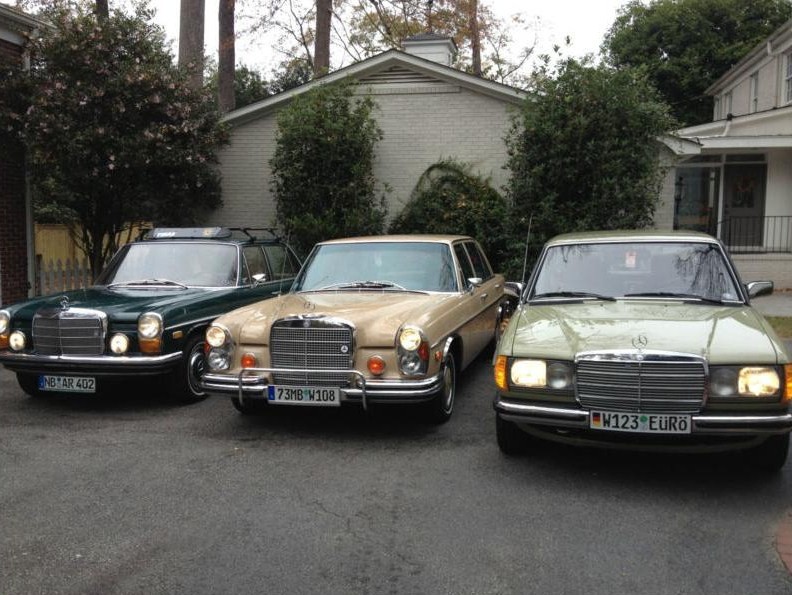 Bottom line, as we’ve always said at DT, we value depreciation above all else in newer exotics, causing them to drop into our clutches price range, but we are also fans of buying someone else’s hard fought restorations!!

If there is no formal motto of DT, we’ll coin it now….There is no better money spent on a car, than the last owner’s!!

Ultimately, cars like this are not good candidates to buy in rough condition and attempt to restore to pristine… there’s just no market to support it (in almost any kind of car); unless, you are happen to be sitting on a mountain of used parts and can do all of the work yourself, and most importantly; you enjoy doing it.

For these W108s, which we consider to be one of the great daily drivers of all time, buy them in the best condition you can find and afford, thereby limiting your investment to just maintaining them in good running order from that point forward. Jay Leno has been loosely quoted as preaching the same philosophy of buying cars in #1 condition and driving them down to a #3 or #4 so that the next guy can have some fun trying to rebuild it again. We couldn’t agree more.

In the case of the (1970-1973) W108 280 SE and SEL 4.5s it appears that for all the high expectations of many sellers who believe these cars will trip the upper reaches of DT’s range at ($12-15K) , in reality they appear to be available in the $6-7K range for really nice ones, with a little more room above that, where the truly exceptional cars will stretch to $8k.

As for today’s Blue 280 SE at the top of the page, which is standing on the shoulders of the blue car above at $5,750, and last week’s 280 SEL at $7,000 I’ll stick with my earlier comment that I believe today’s 280 SE could stretch to a high of $7,200 for a bidder who could inspect the car in person and drive it home; but, an out of state buyer, without benefit of pre-inspection and the burden of transportation will probably stay right in the $6,500 – 6,800 range. Which is right were the bidders valued it, the last time it was offered.

Whether you agree with my mini-analysis or not, we will certainly shake our heads in agreement that the current market, which places equal value on cars of the quality of these W108s and the likes of this nearly 100,000 mile 2004 Mercury Grand Marquis, or this 13 year old 2000 Buick LeSabre with just 44,000 miles, needs correction! 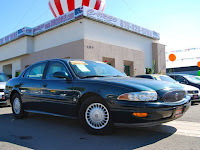 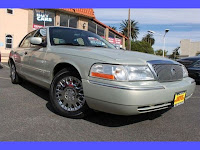 But until that correction does happen.. grab a W108 with a 4.5 V8 for granny car money and enjoy!!

Find a better, cheaper W108 with a V8, Email us here: tips@dailyturismo.com