Daily Turismo Omologato is a series where we feature unique cars that are well above the normal DT priceline, but are unique, interesting, zany enough that we can pass them up…think of it like DT Private Reserve Mountain Dew Code Red.  The Kia Sorento is a car based SUV/crossover family hauler built in West Point Georgia with seating for 7.  This 2014 Kia Sorento EX is decorated in a Justice League (Batman, Superman, Wonderwoman and some other tights wearing dudes) graphics sceme by DC Entertainment and is being auction on ebay with all proceeds going to charities, current bidding for $38,000 with a few hours to go. 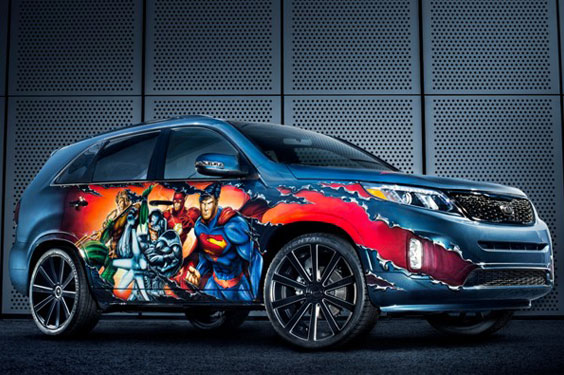 A Kia Sorento doesn’t qualify for DT material on any of the basic requirements; rear-drive– no , cheap- no, fun to drive – no…but it hits all of the right points for a good riddler feature.  The graphics wrap, interior accoutrements and tailgate art are turned up to 11!   The car is being sold by Kia Motors America and it has about 100 miles on the odometer from being displayed to promote the DC Entertainment We Can Be Heros charity. The winner of this super-ride isn’t just going to get a modern family hauler, he is also going to donate a significant chunk of change to charity, specifically to the International Rescue Committee, Mercy Corp & Save the Children.  More info can be found on the rescue.org We Can Be Heros site, but in short much of the charity goes to preventing famine in the Horn of Africa. 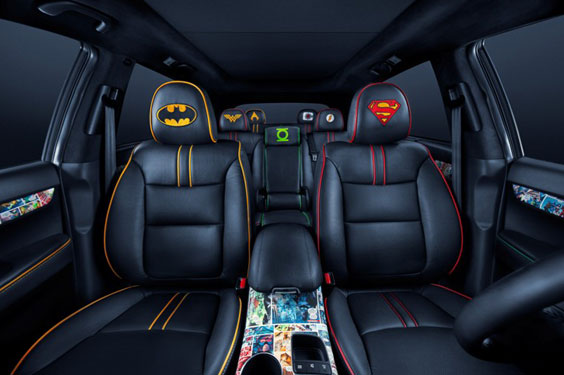 The interior has been decked out with comic book layers where others put carbon fiber overlay, and each of the 7 headrests have been embroidered with a logo from one of the Justice league characters.  It is final proof that Batman is indeed Superman’s bitch and that the Green Lantern is a small child who sits in the middle.  The two dudes relegated to the 3rd row seats would require googling and that is the kind of time you’ll never get back. 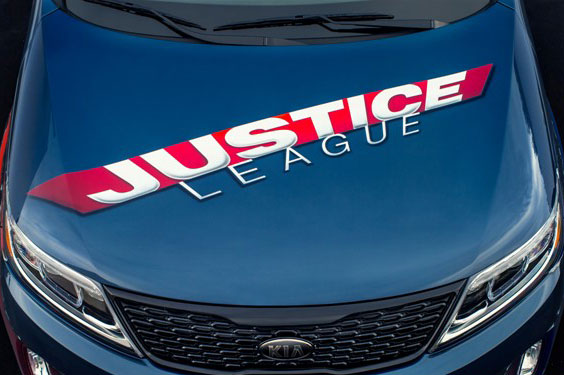