Some astute readers may remember that we do occasionally write about our own project cars around here! We started with a neglected refrigerator-white Volvo 242 in 2012, did some refurbishment, and sold to our friend Alex who went Full Swede on the car – it now sports a Volvo inline six swap, custom made wheels, luxed-out interior, mondo brakes, and has been detailed to the hilt. Vince and I went our separate ways into various other projects; the E-i-C chose to devote his spare 15 minutes every Saturday afternoon to a Saab 99 and then a Buick Roadmaster, while yours truly has delved into other Volvos and NA Miatae and BMWs more extensively, including a 1973 2002 and this black-on-black 1993 E34 M5. You haven’t heard much about the M5 lately (since my trackday writeup) but rest assured it is still rumbling around the mean streets of the South Bay Los Angeles area. For a while it was also barfing hydraulic fluid all over those same streets, forcing me to face grim reality and address some necessary repairs in the power steering / self-leveling suspension system. 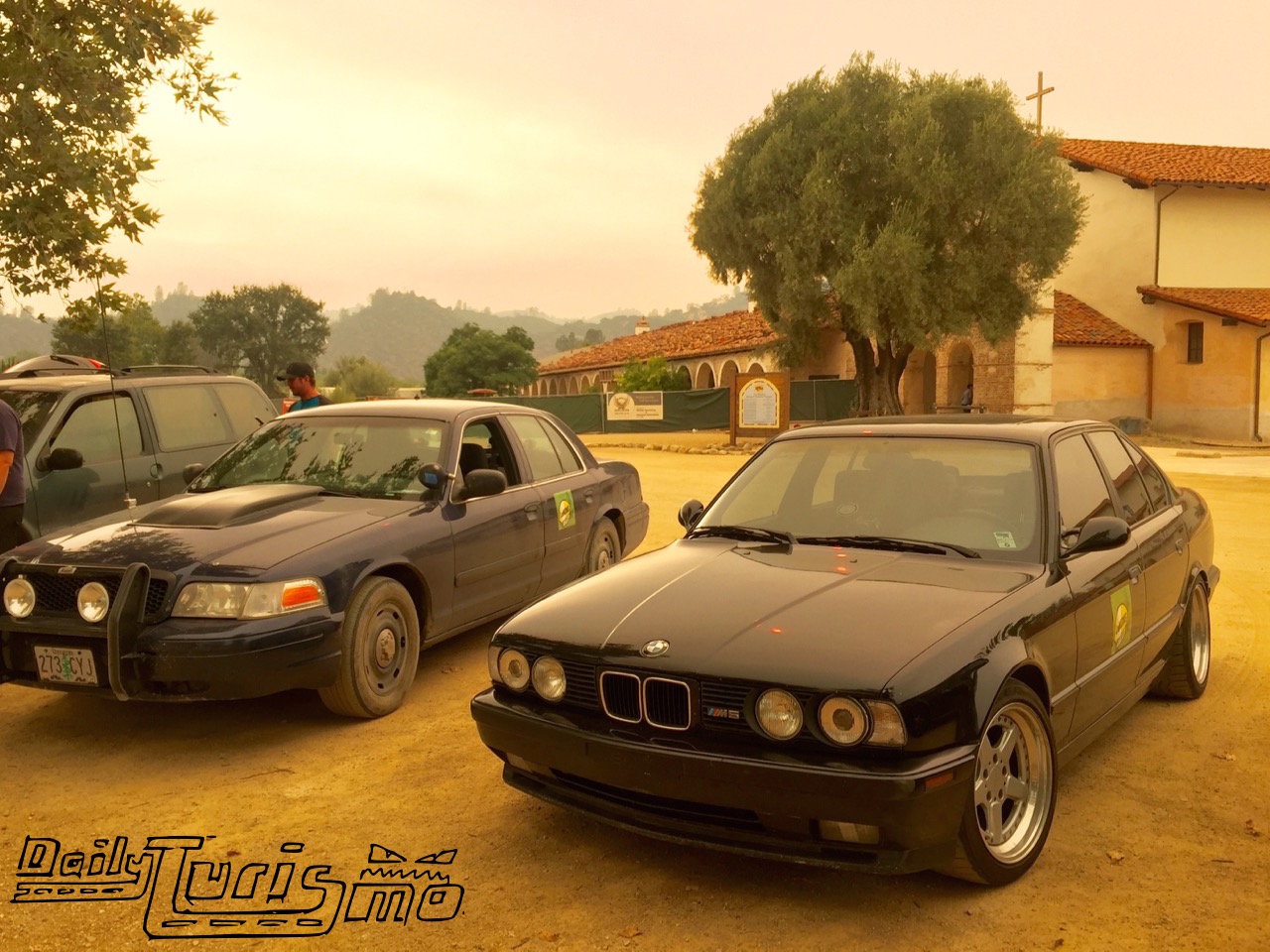 The M5’s beastly inline six, the S38B36 in BMWese, lurks under the hood like a 500 lb gorilla waiting to be set free. Seriously – this is a huge and heavy engine – with an iron block, wide bore spacing, and double overhead cam valvetrain. On the driver’s side the six individual throttle bodies fed by the massive plenum and MAF don’t leave much space to get at the combination PS / SLS pump that lives down there somewhere. 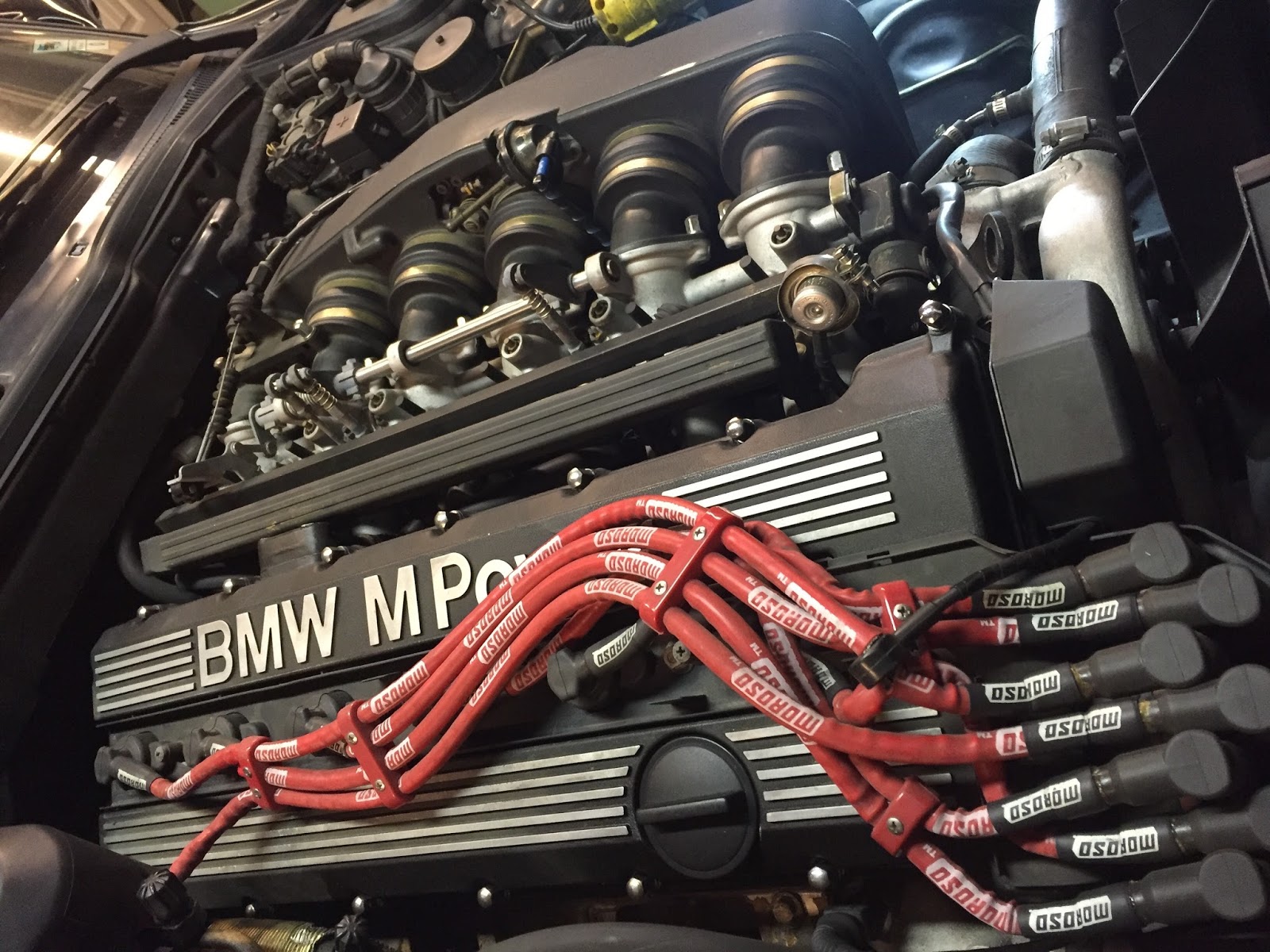 Below and inboard of the airbox is the pump in question, which is actually two pumps in one. It is fed by the pretty substantial fluid reservoir at lower left in the photo below. The front half of the pump runs the self-leveling hydraulic suspension system, while the rear is left to do more mundane power steering tasks. 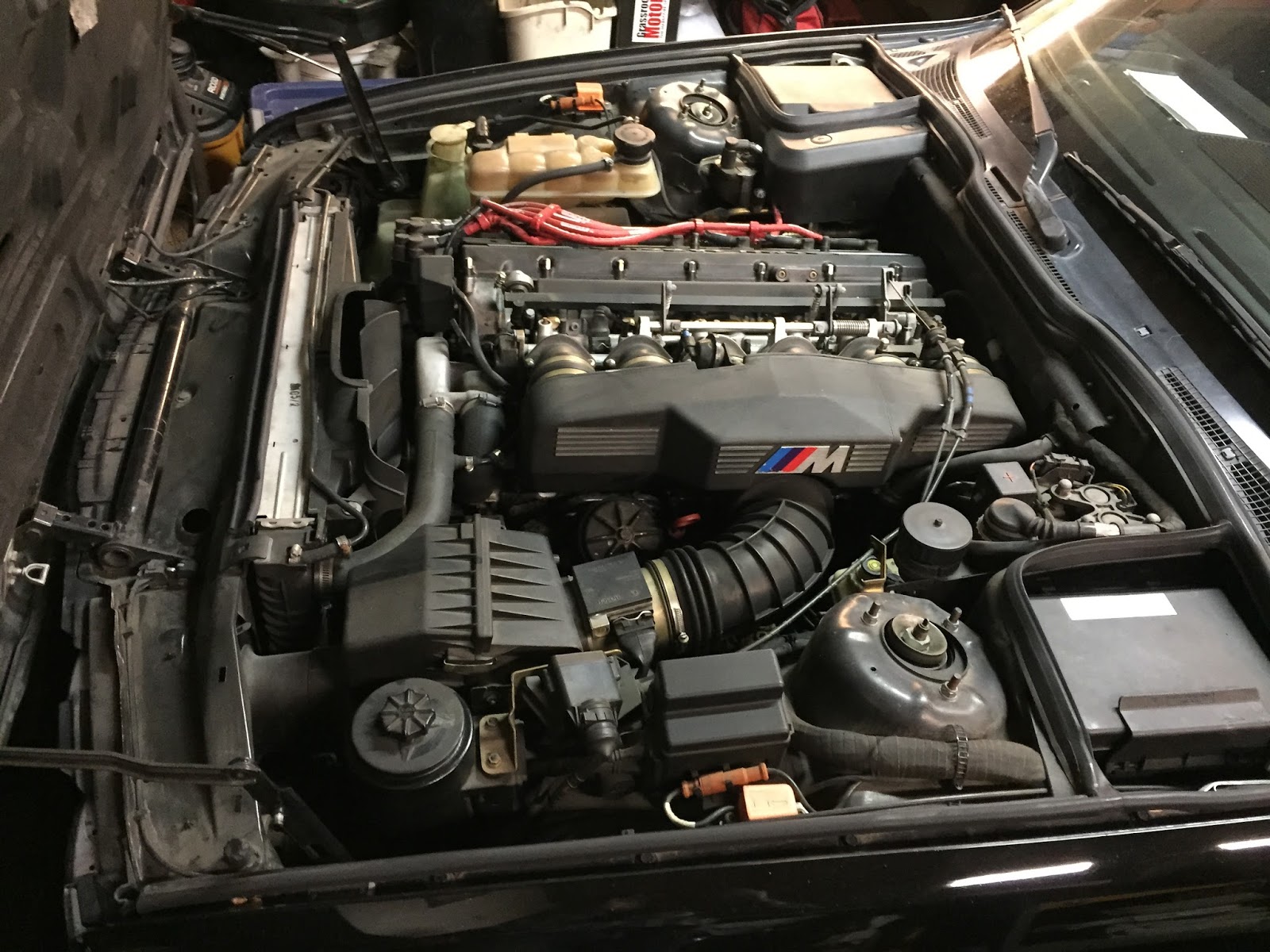 Back in the ’80s and early ’90s, German car manufacturers had an infatuation with high pressure hydraulic systems adapted to independent rear suspensions. The W123 300TD (T for Touring) wagons had this type of setup, as did the non-M E34 Tourings, and the E34 M5 sedans. Basically the idea was to let the car jack itself back off whenever there was too much junk in the trunk, leveling out the rear suspension back to nominal ride height. Great in theory, but unfortunately for me and my freshly repaved street, those original 1993 fluid lines reached the end of their lives, meaning time to dive in under the hood. 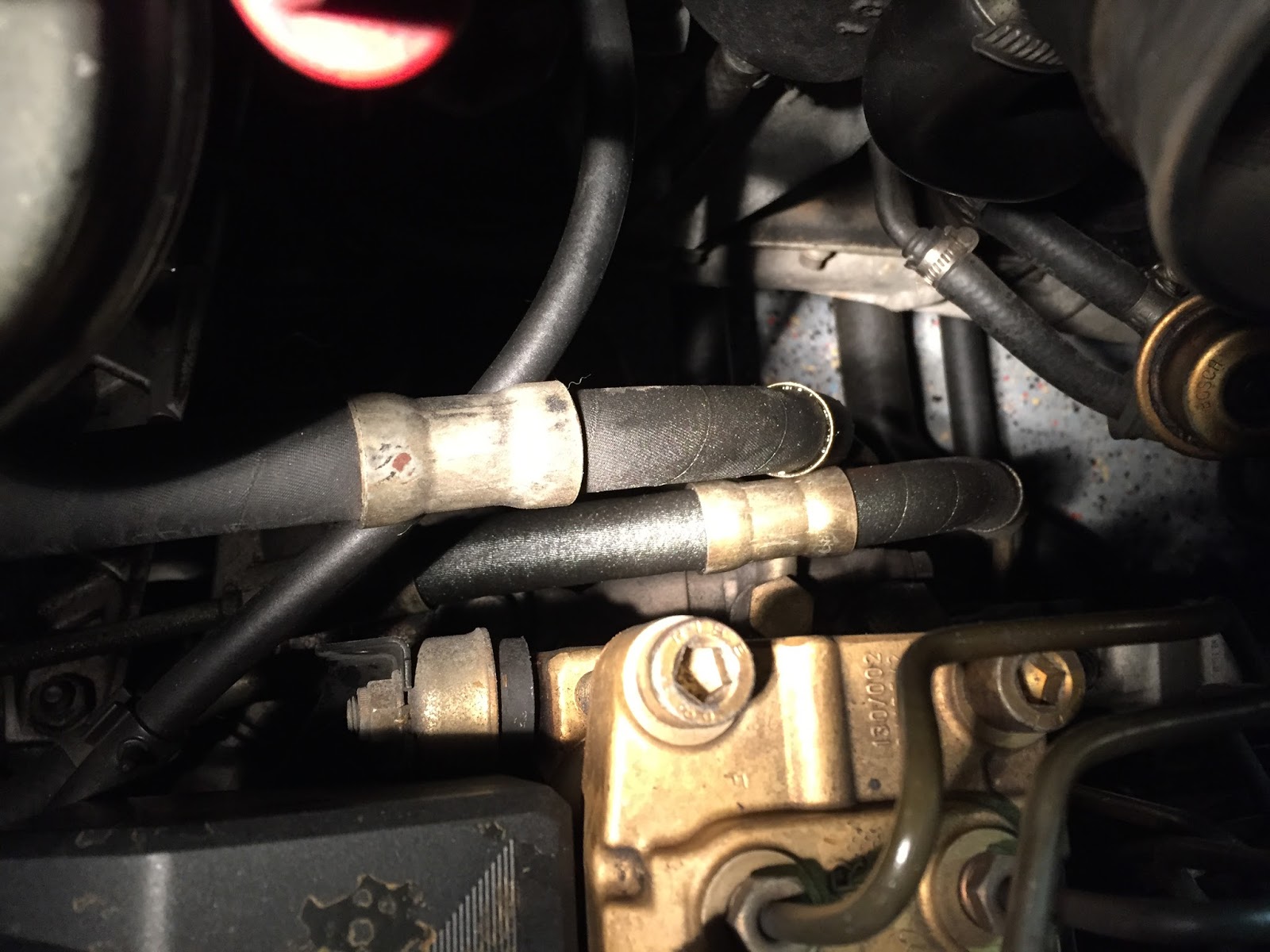 If you remove the airbox, MAF sensor, and intake snorkus from the S38, you can get to the SLS/PS pump and its associated lines. And there are a lot of lines. 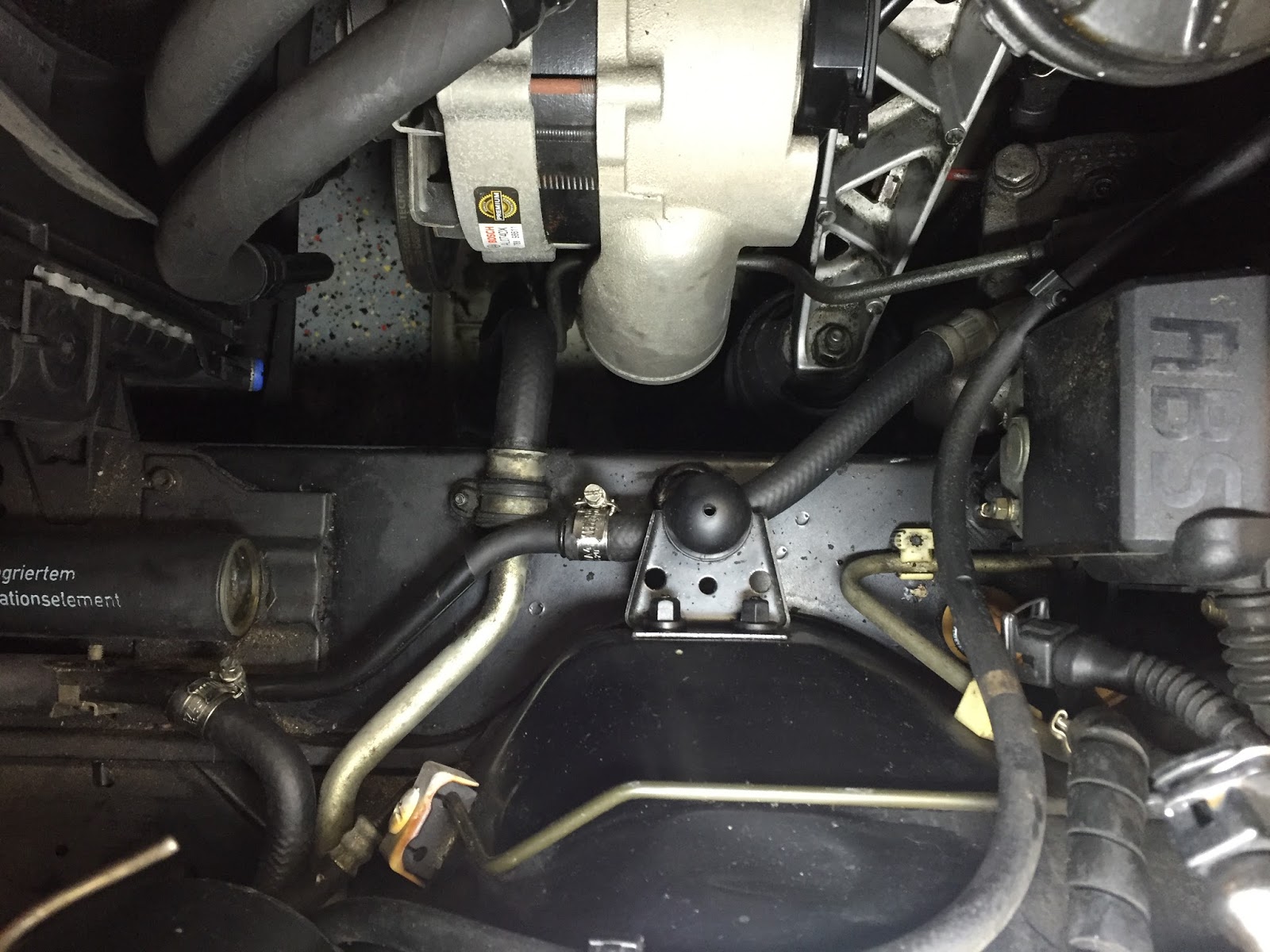 The tandem pump hides under the alternator and has one inlet from the reservoir, and two outlets, to the steering box and rear suspension, respectively. In the PS circuit the steering box return line feeds a loop-de-doo power steering cooler up in the nose, and then the fluid gets dumped back into the reservoir. For the SLS system, the fluid gets jacked through a bunch of accumulators and then into the fancy rear hydraulic dampers, which act to change ride height, based on closed-loop control through a brain box and level sensor. From there a separate smaller return line dumps the depressurized fluid back into the common reservoir.

Long before I ever acquired my M5, like over 10 years ago, someone deleted the SLS system…well, sort of. The rear suspension was changed over to a conventional spring & damper setup with a lower static ride height. Which is fine with me; less expensive leaky stuff to break and leak all over my driveway. Except they did what most people do in this case…cut corners. The SLS pump was still merrily pumping away and the lines had been looped back on themselves, so that high pressure fluid was still there. And now the time had come for those OE hoses to meet the big hose crusher in the sky; at least two of them were hemorrhaging fluid from the swaged connections between hard line ends and flexible hosey bit in the middle. 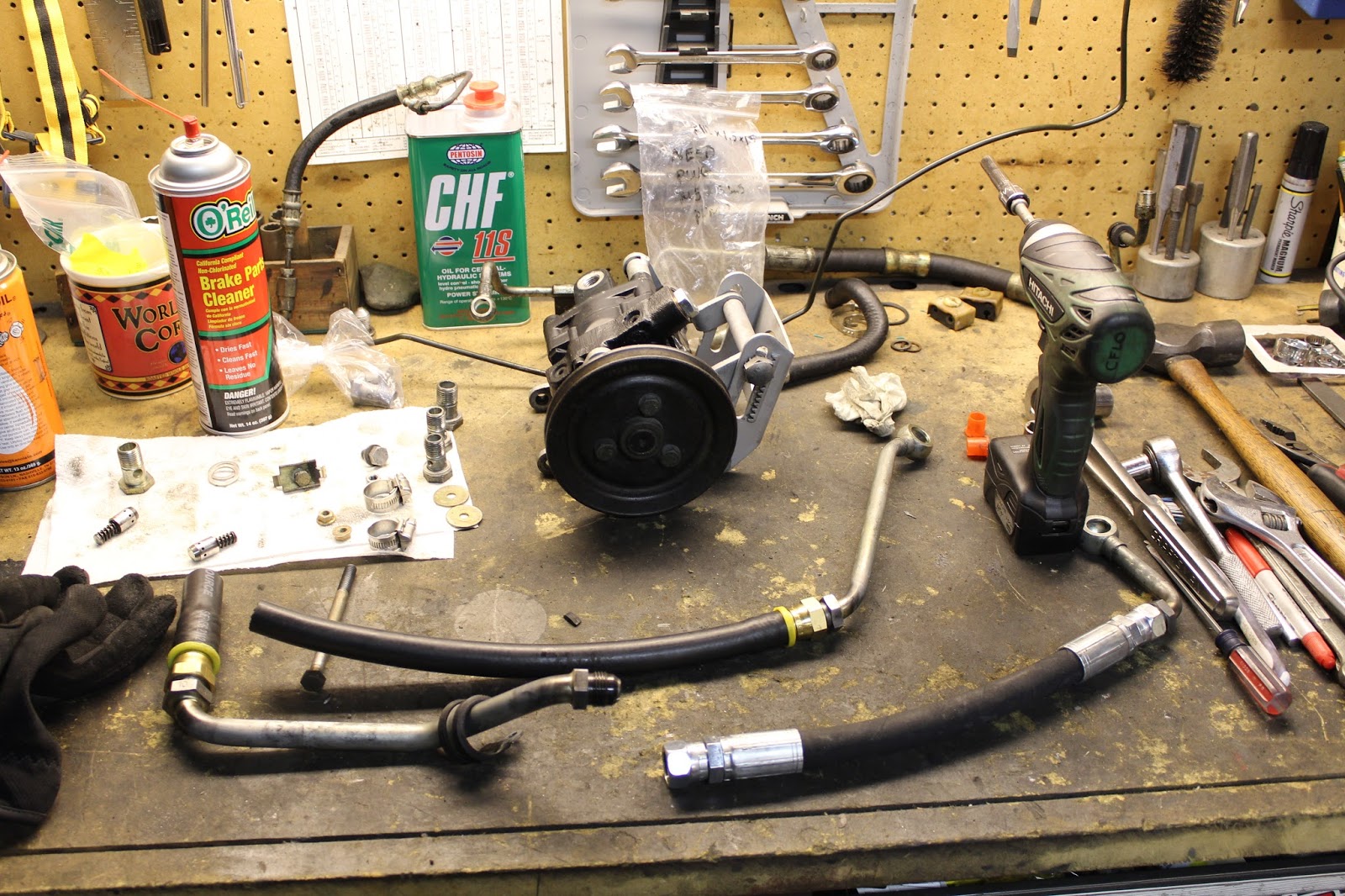 Now, I could’ve dropped about $300 – $500 on replacement hoses and called it a day – but that wouldn’t be living the DT lifestyle! So instead, I took my original perished hoses to a local hydraulic shop to have the old hardlines and ends affixed to some nice new rubber. 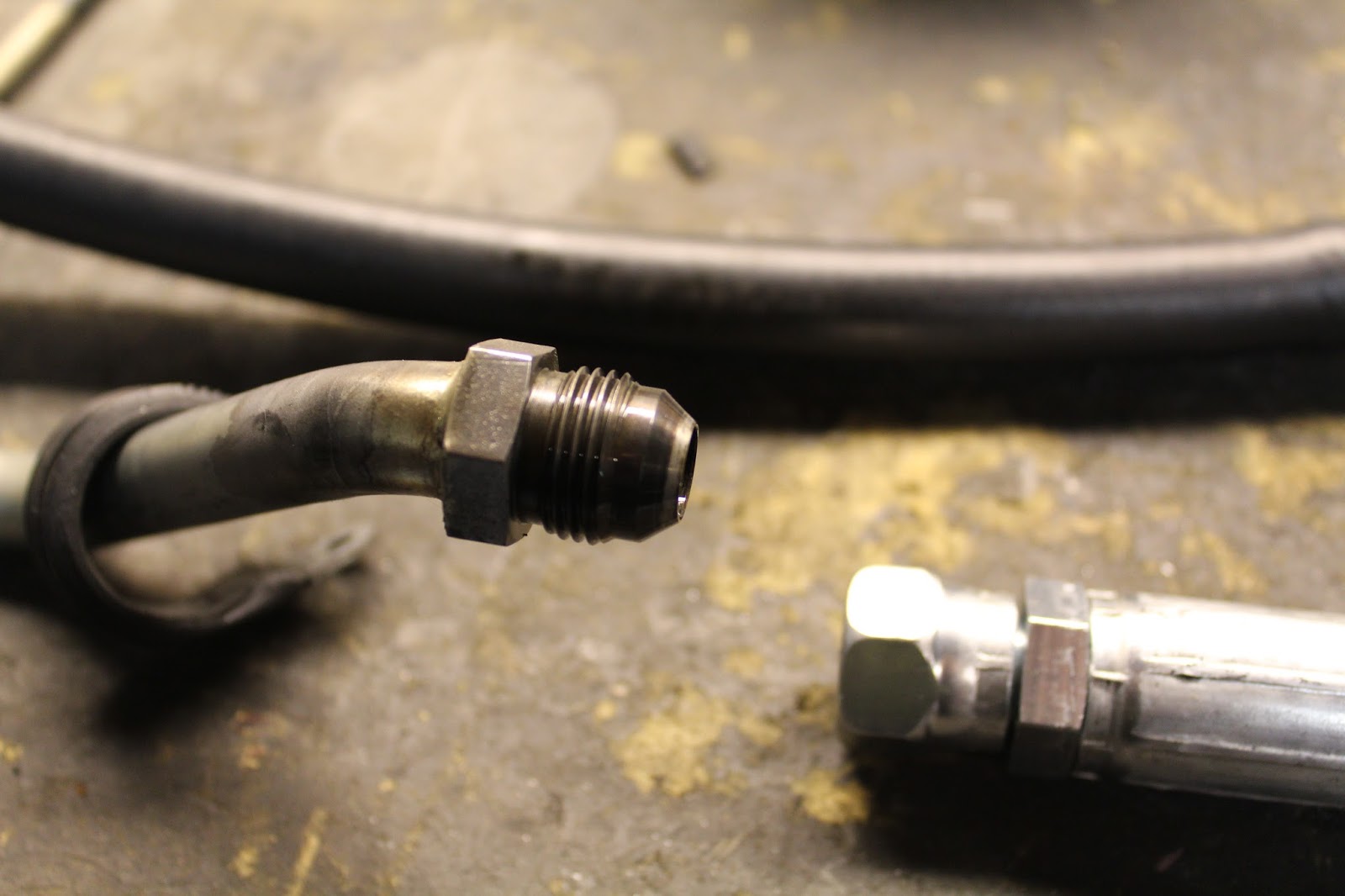 Mr. Hose Inc. in Wilmington, CA took my old leakers, measured them up, then cut off the original swaged connections. They brazed new brass hydraulic fittings onto the ends, and made up hose sections of the correct lengths using new swaged connections and free-spinning ferrules. This way, I could get the new assembly installed in the car before tightening the newly-added intermediary joints and locking the orientation of the ends relative to one another. 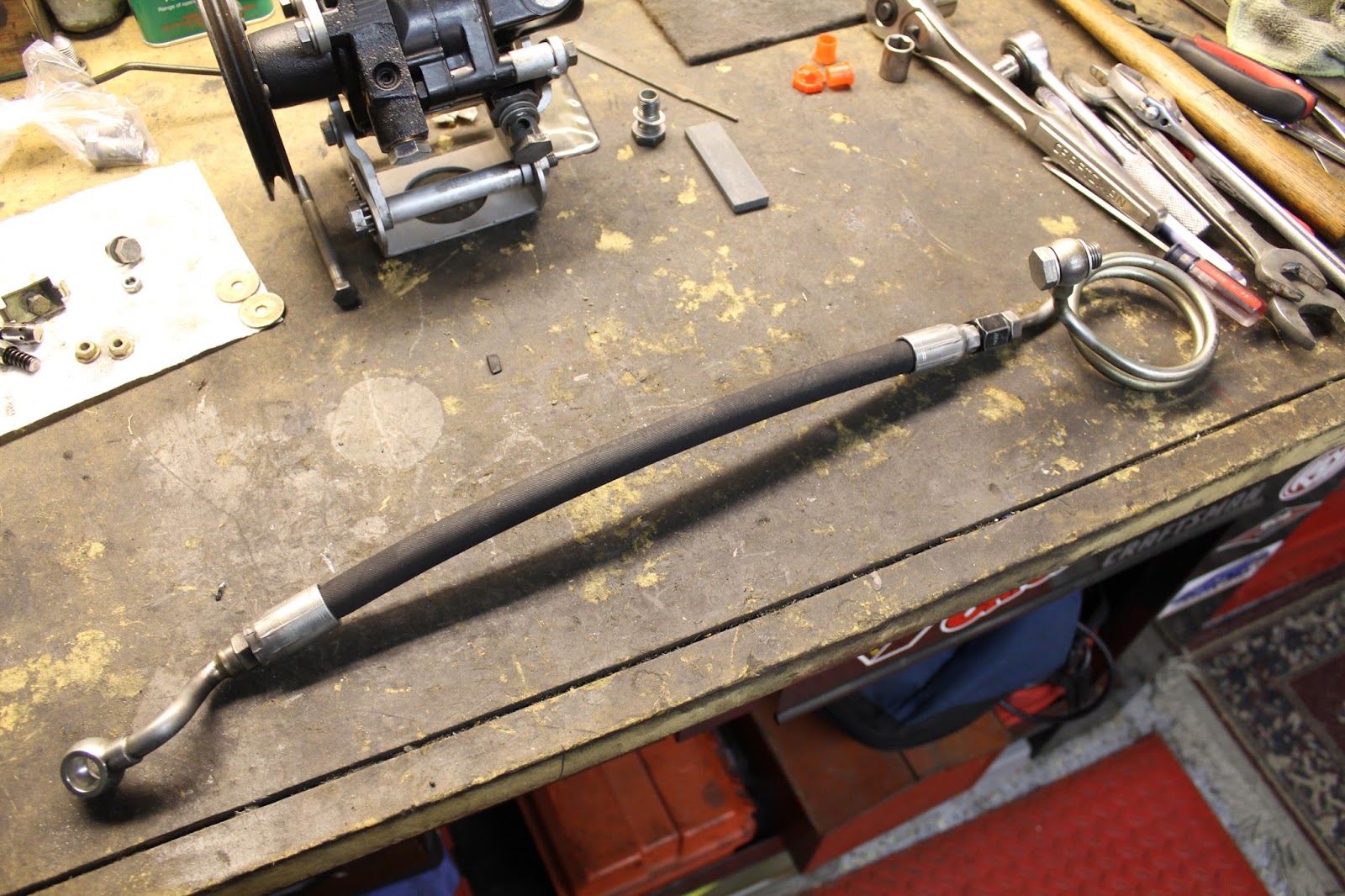 The hydraulic shop hoses are plenty beefy and should serve long lives – and if they need replacement again, the center flexy bit with the swaged fittings would be the only thing that would need changing out. Pretty smart, but I can’t take credit for the idea. My only complaint is that the new hose is appreciably stiffer than the old flaccid German rubber, meaning it was kind of a bear to install a few of these, what with the snaky twists they have to make under the M5’s hood. Doable, just a bit more fettling required than stock. 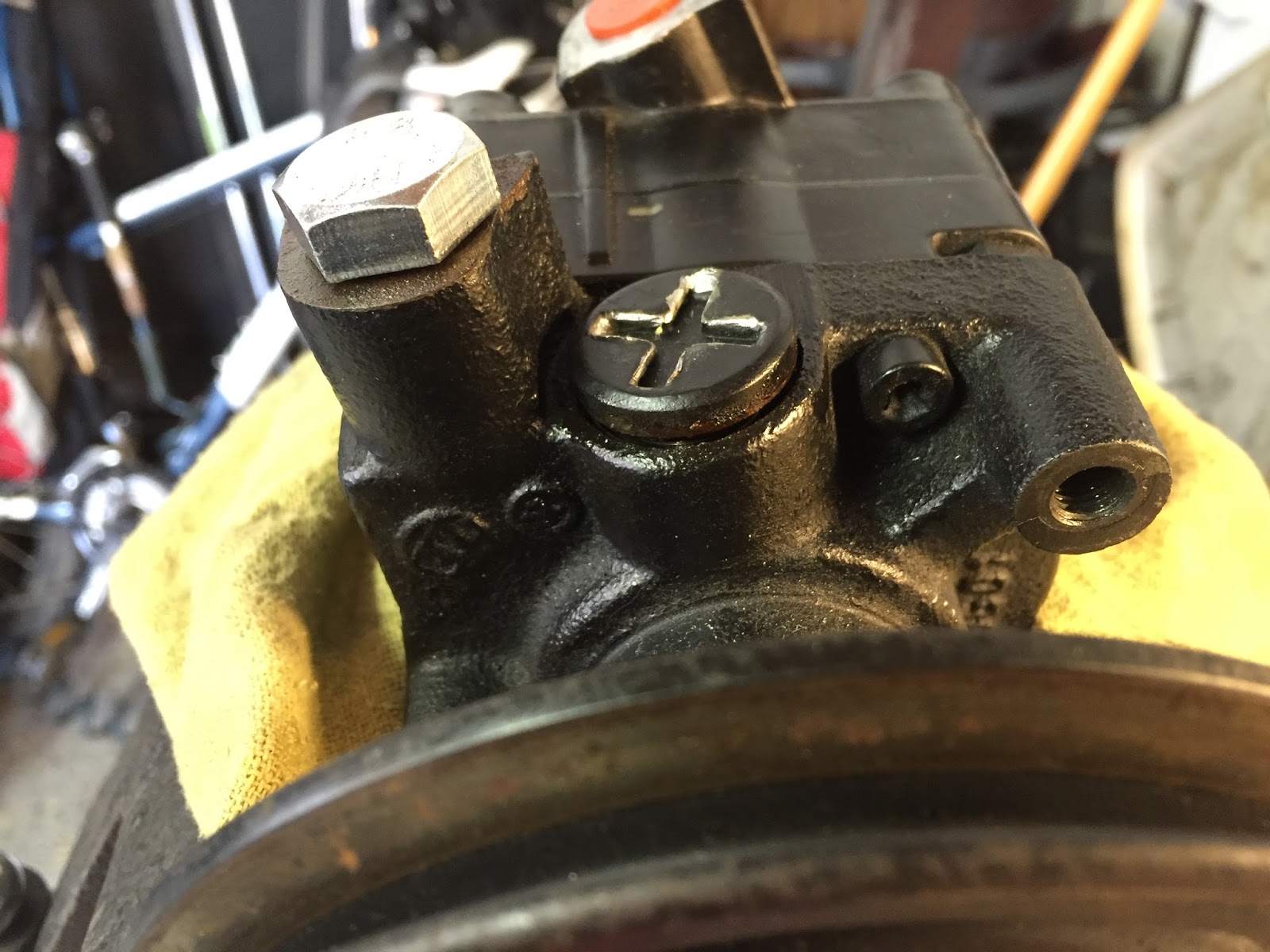 “Now wait a minute” I can hear you thinking, “you can’t just take the SLS hoses out of the system and let the SLS pump run dry. That beotch will hydro-lock itself or burn out or something.” Right you are, which is why I proceeded to gut the SLS part of the tandem pump, while leaving the more useful power steering side of it alone. Above we can see the front-most cast section of the housing is where the SLS pump lives. The new shiny hex head at upper left is the fine-pitch M10 bolt that I installed with a new crush washer to plug the old outlet hole. But the pump pistons – and there are two of them (in series I presume) – are hidden under opposing caps, which look like big Phillps screw heads. Good luck finding a screwdriver to fit that shallow cross-shaped depression. 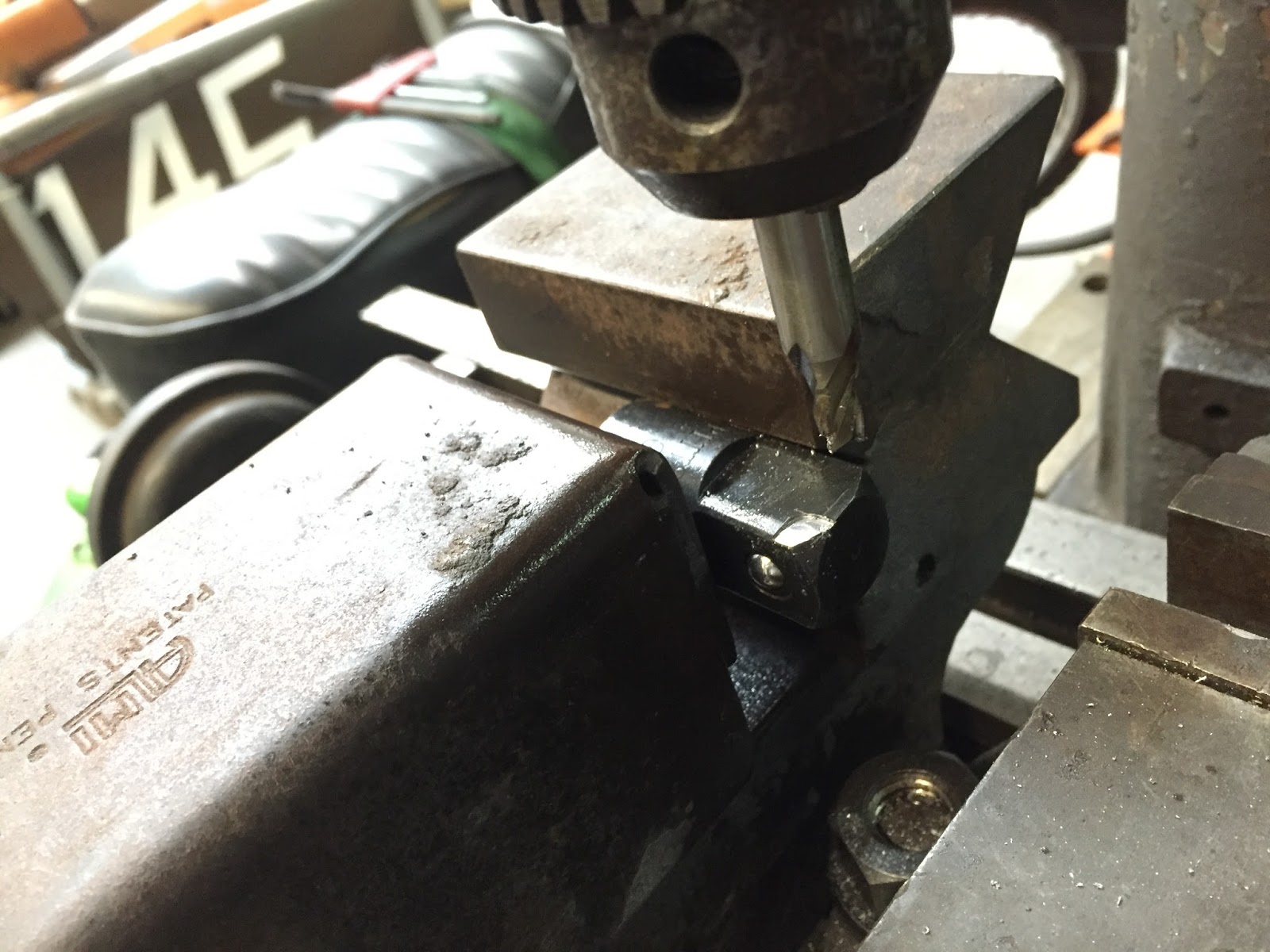 You can’t call yourself Daily Turismo Technical Editor without occasionally breaking out an endmill and making your own special tool, so I got to work. I figured these caps would need some serious persuasion to loosen, so I headed down to my local Horror Fraught tool store for a cheap impact driver set, the kind that looks like a big screwdriver that you hit with a hammer, with a 3/8″ ratchet drive at the other end. So I also grabbed a 3/4″ step-up adapter, which was meaty enough to whittle down to a cross shaped tool bit. 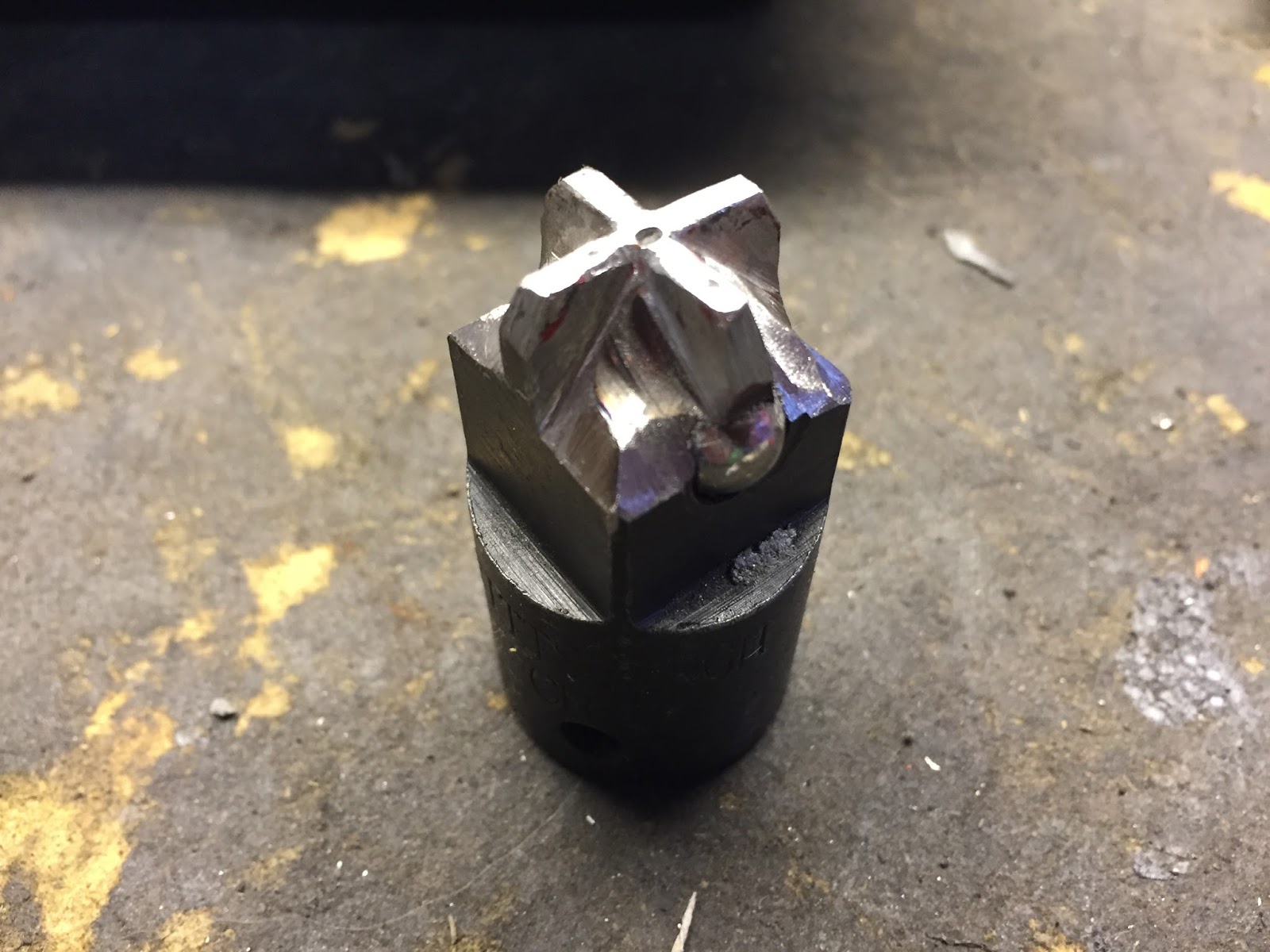 A few frustrating hours of jank-milling and hand grinding later, and I had this lovely piece. The tip had to have nice square edges shaped exactly right so they would grip the thin edges of the piston caps, without camming themselves out and stripping what little metal I had to work with. 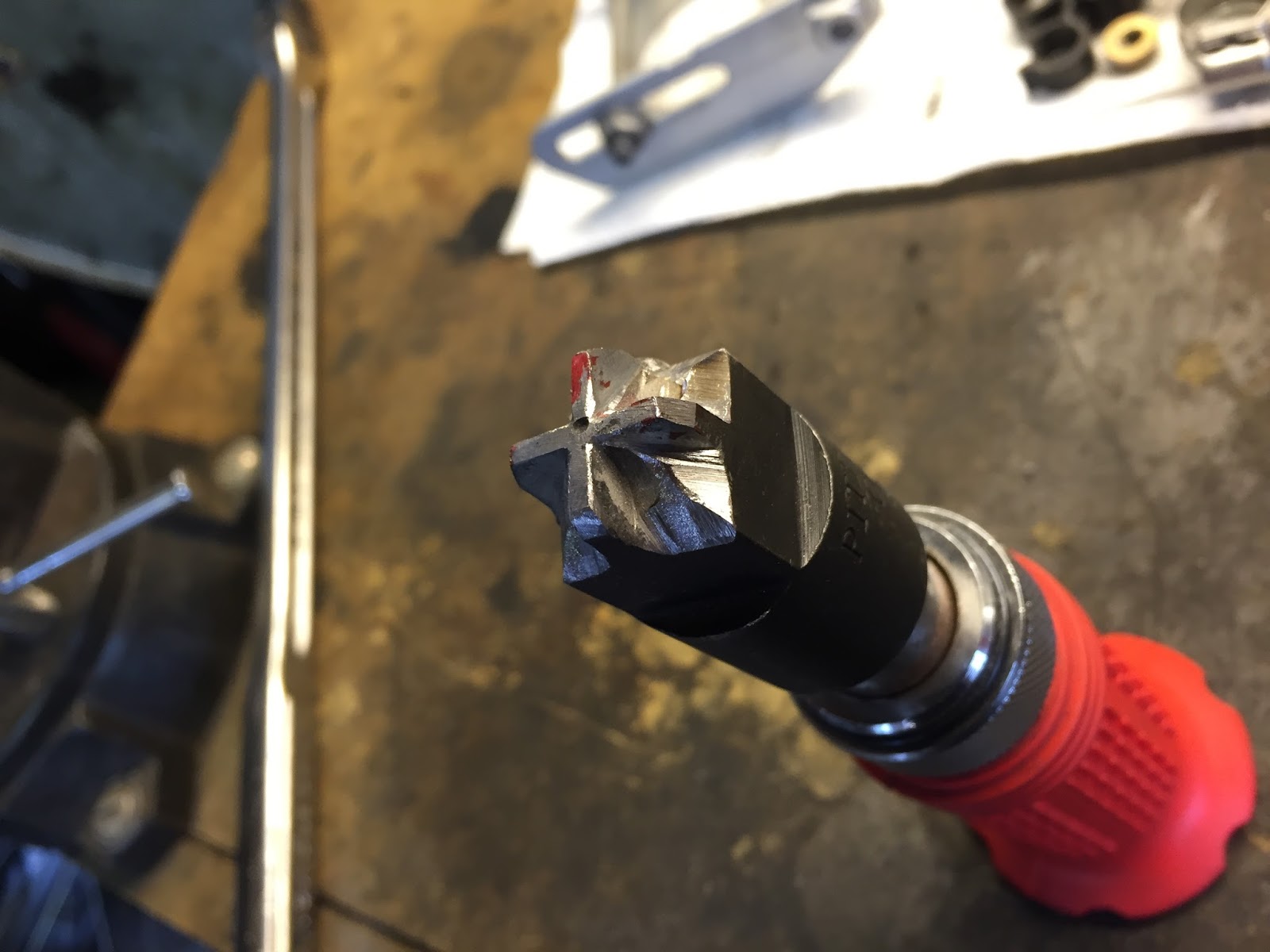 Here’s the dingus installed on the dongus – impact driver ready for action. The pump got mounted securely in the nearest vise, the driver got whacked a few times with a big solid ball-peen, and the caps gave up the fight pretty easily. 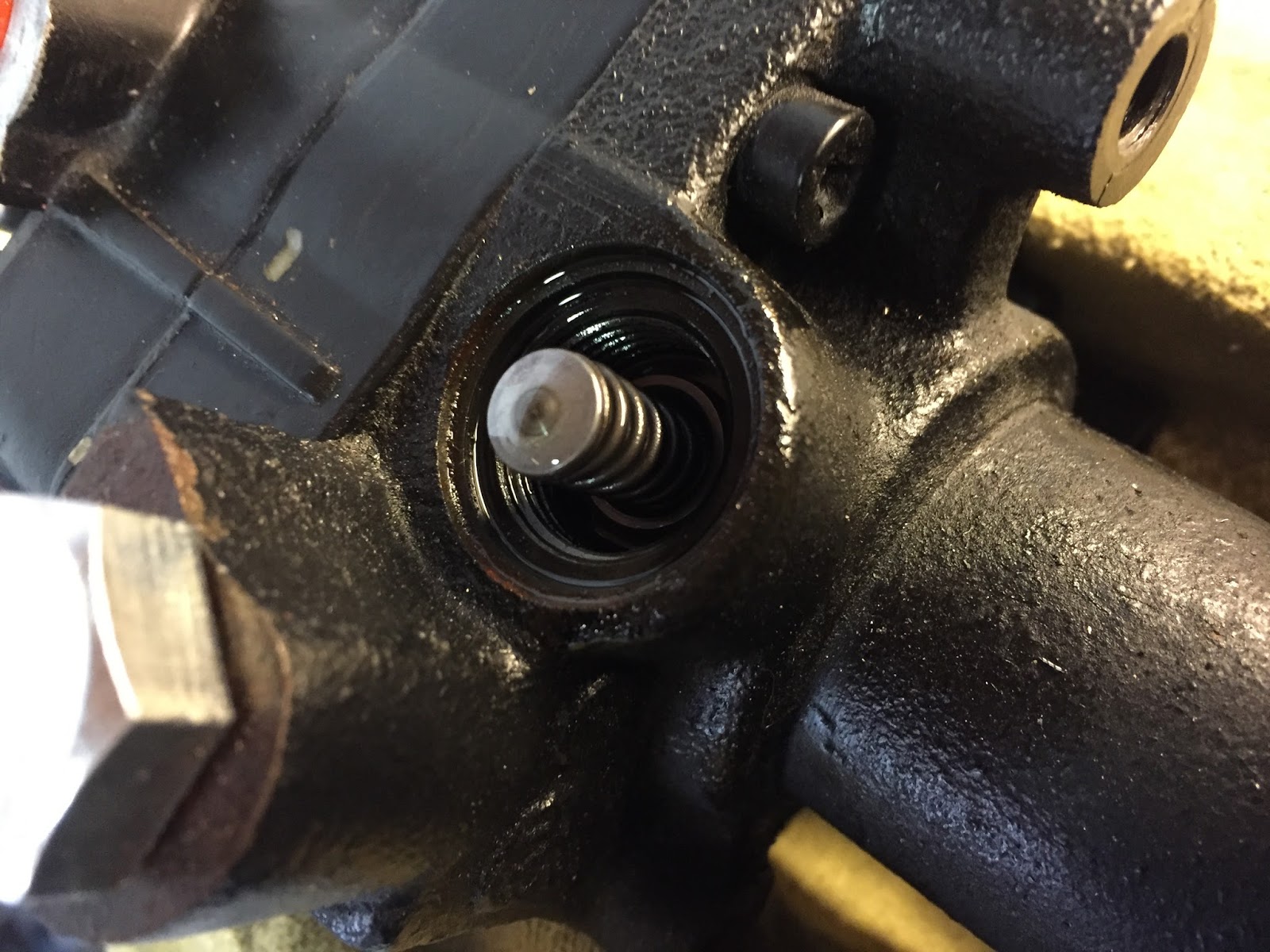 Under each cap we have a little spring, a spring seat, and the piston itself. The pistons are driven by a cam lobe on the central shaft. So pulling them out along with the springs means that the cam will sit there and spin away without doing any work, and without generating any hydraulic pressure on this un-used side of the pump. Hooray. 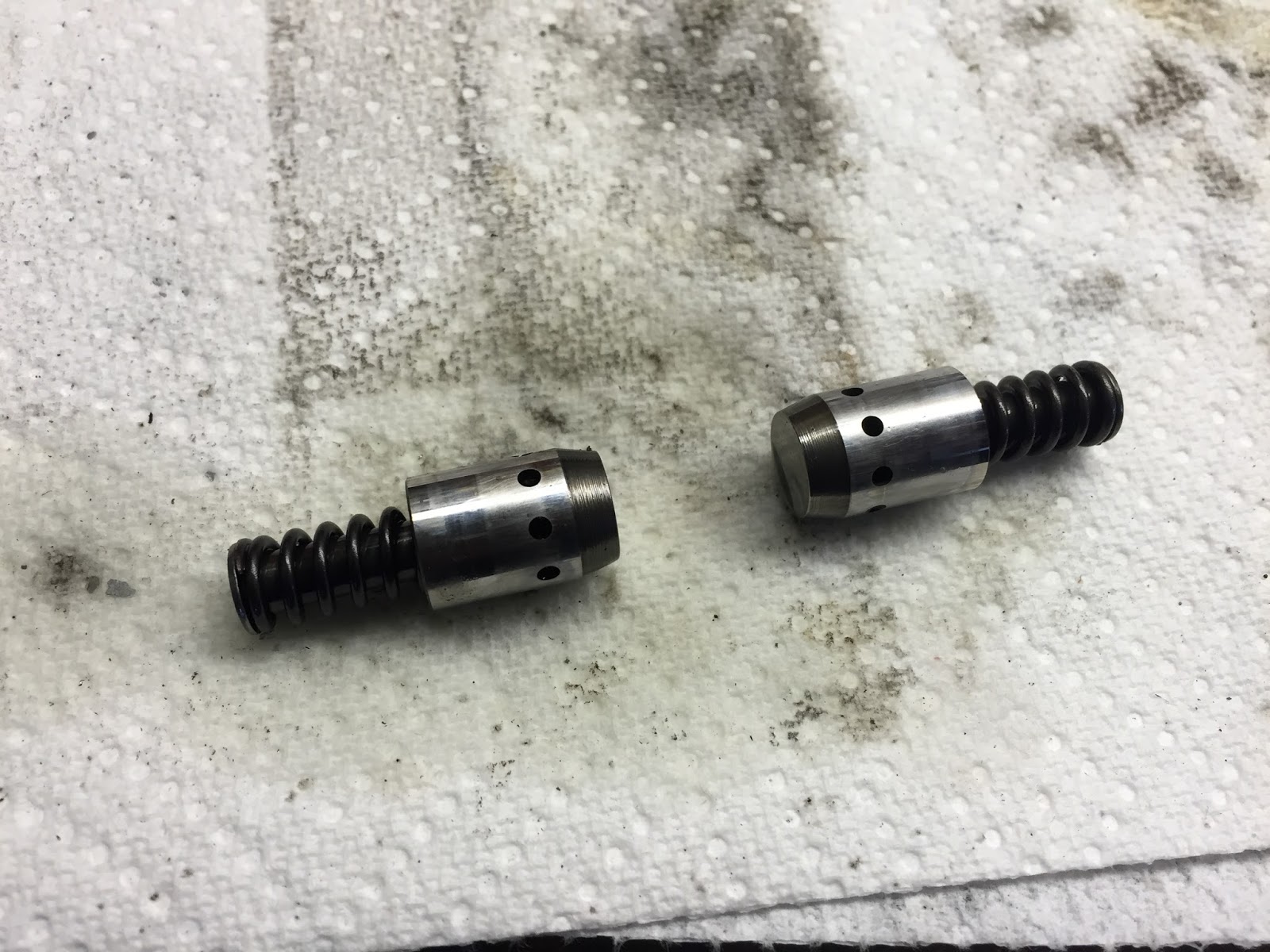 The pistons were saved for the next owner to reinstall while swearing at the “dipshit previous owner” who took it all apart and didn’t leave Ferdinand BMW’s creation perfectly stock. Well, at least I can share the blame with a few DPOs before me, too. 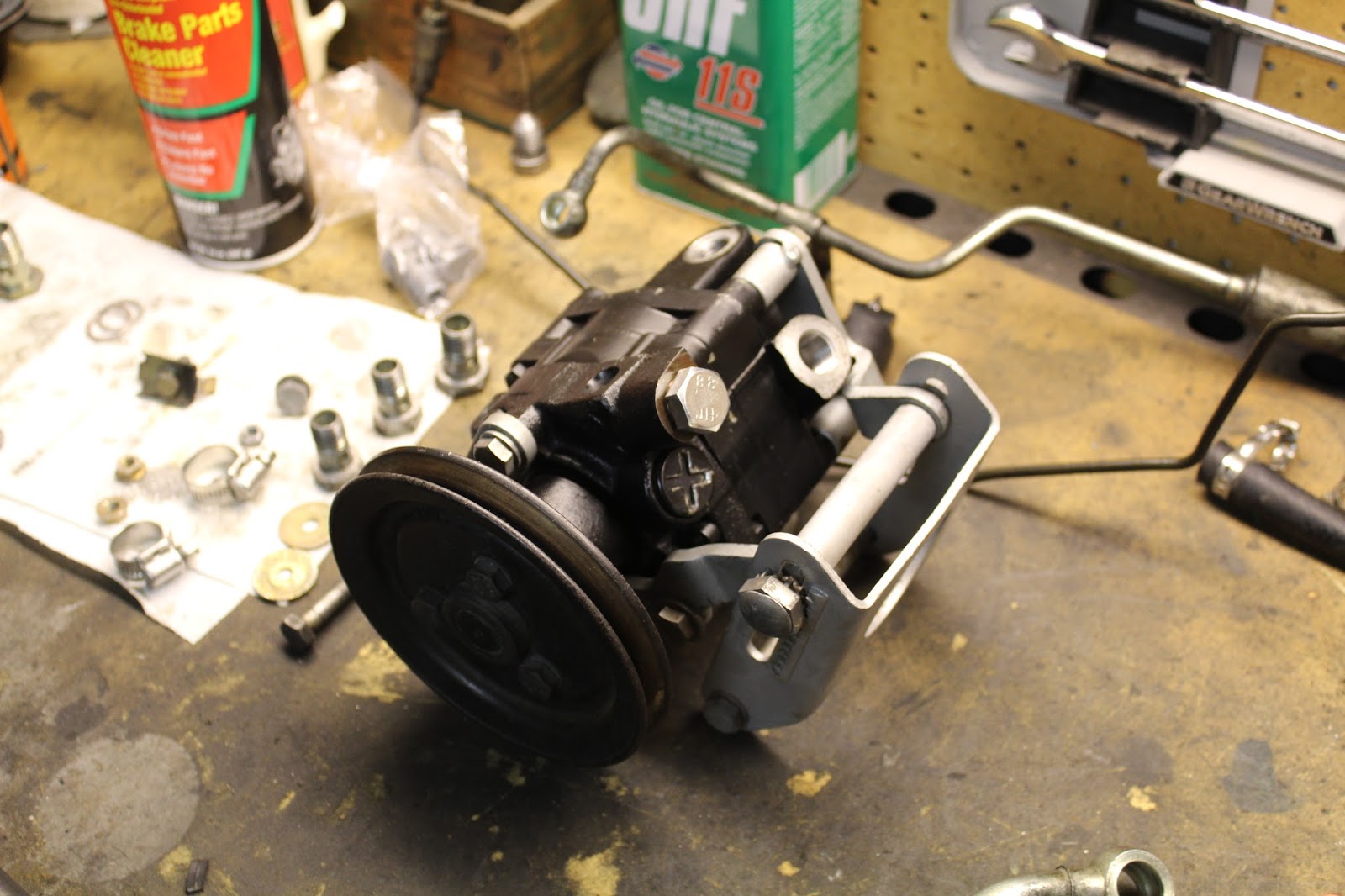 With the caps gingerly reinstalled using some fresh copper crush washers, that part of the modification was done, and I could finally say that my SLS was done and gone. Some E34 M5 and Touring owners will swap out the power steering pump, bracket, and reservoir for a standard one from a non-M sedan, which may work fine, but my car is equipped with the optional Servotronic speed-sensitive power steering box…and I did not want to introduce a new variable with an unknown pump feeding that sucker. So the PS side stays exactly stock, and the SLS side is fully decomissioned. 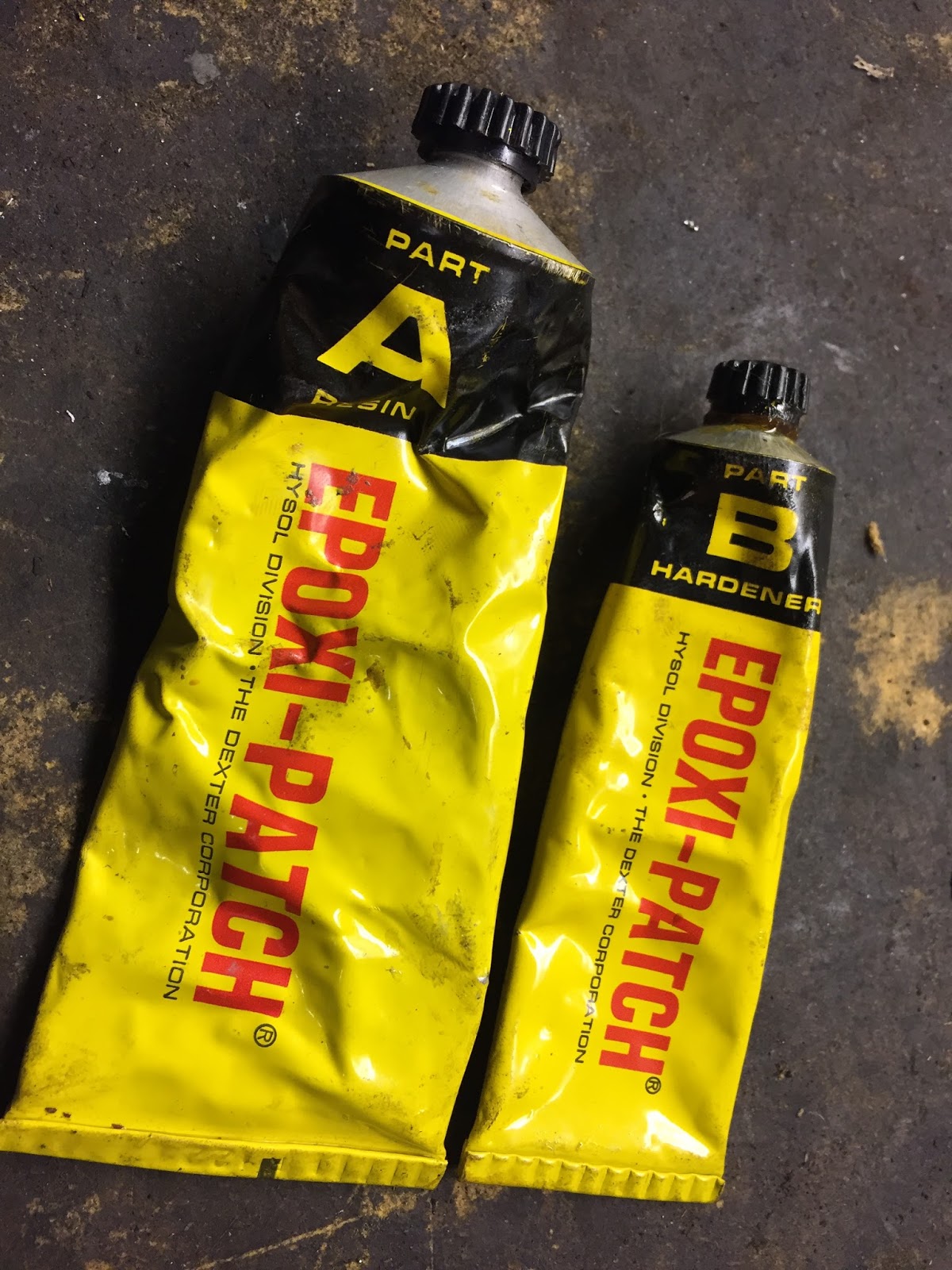 The remaining part of the system that needed to be addressed was the reservoir. It had the usual feed and return lines to the PS pump, but also a smaller diameter feed to the SLS pump. If this had been made with some sort of a fitting then it would’ve been straightforward to plug, but since it was a little hose barb dongus at the bottom of the tank, it needed a bit more creativity. 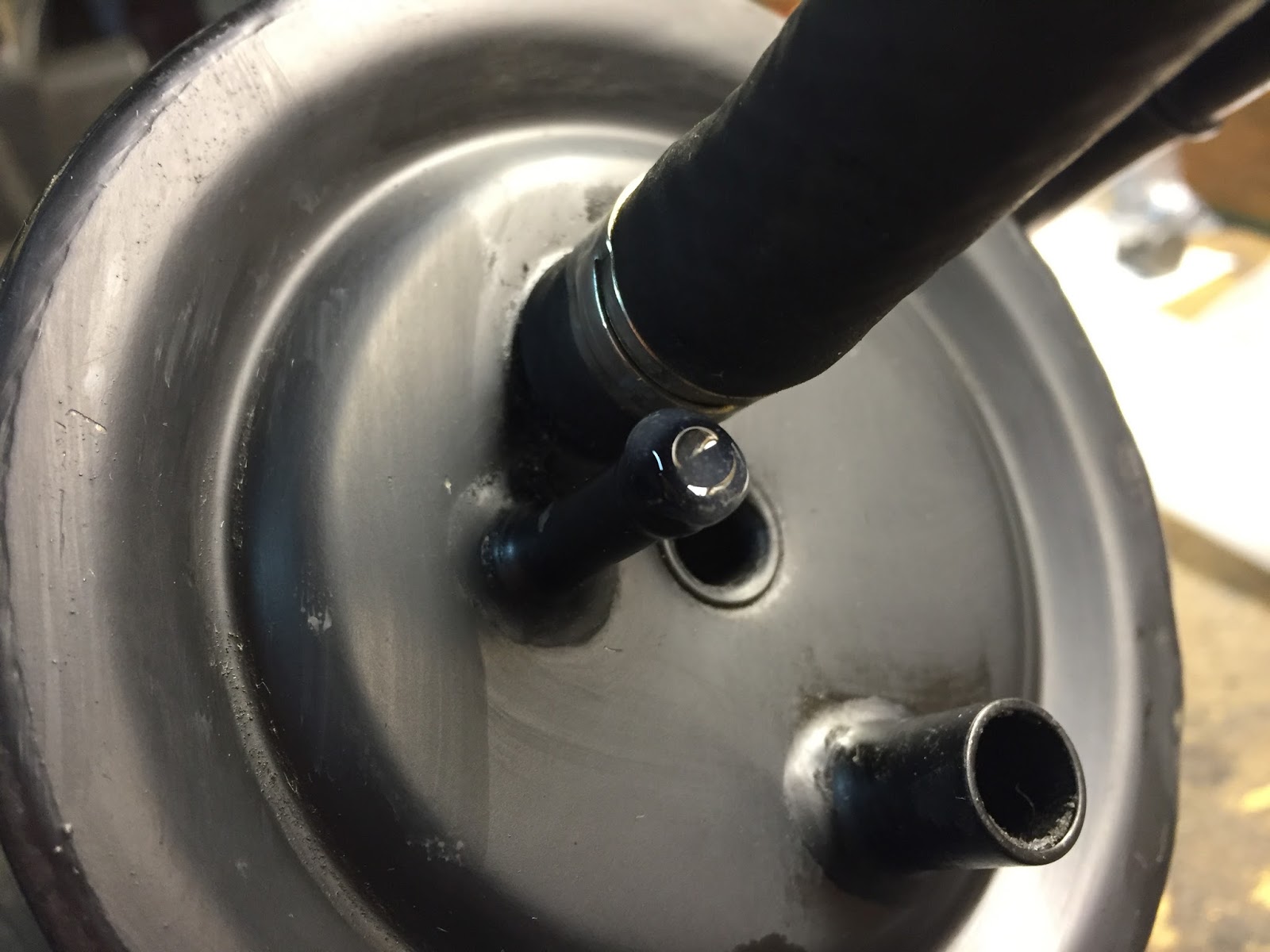 So I busted out my 40 year old tubes of Hysol 2-part epoxy, mixed up a batch, and goobered it into the hole. After cleaning the hydraulic fluid out using solvent, of course. 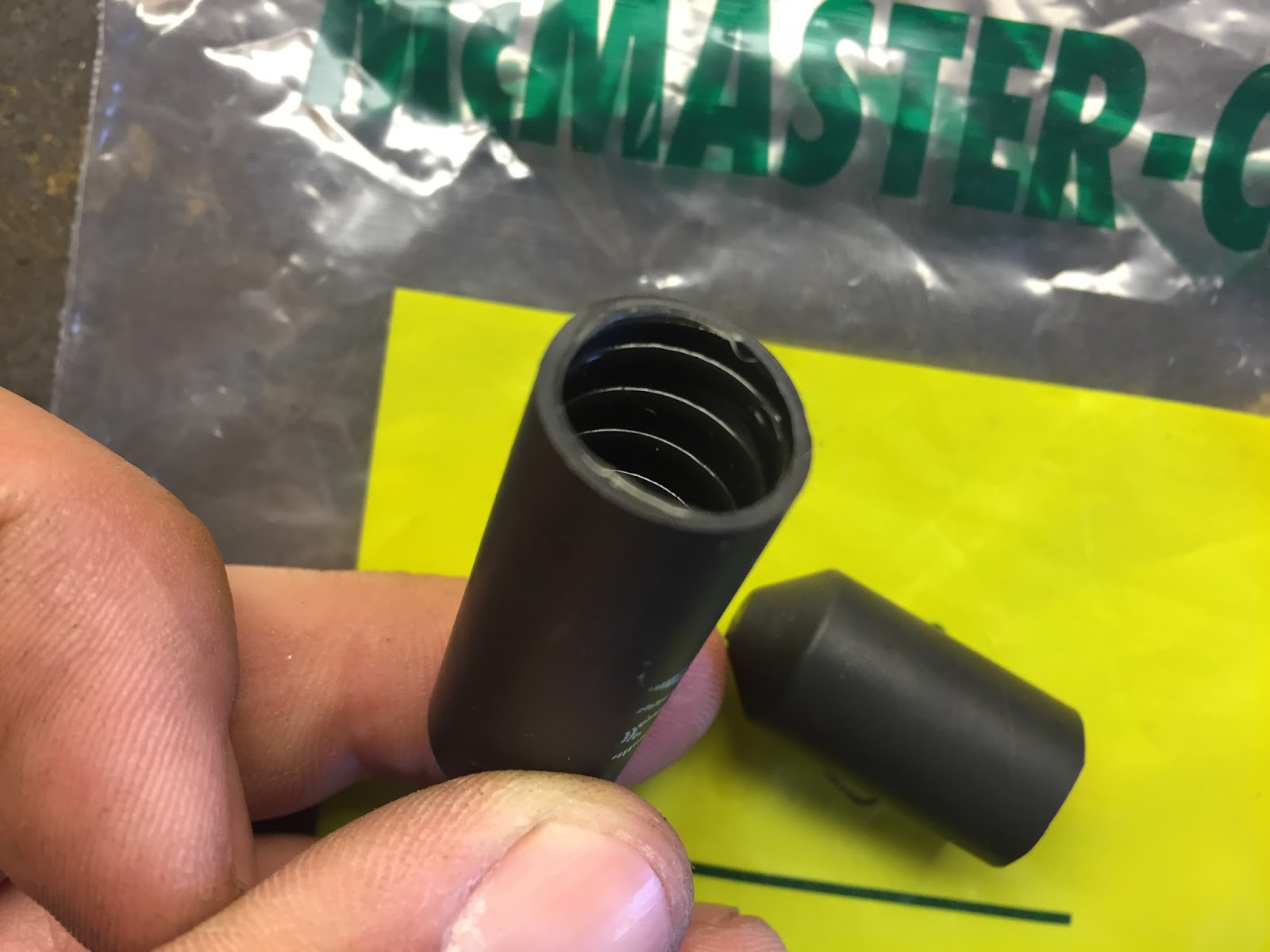 I wanted a cleaner blockoff solution vs. the usual short bit of hose with a bolt jammed in the end, and found these nifty shrink-caps on McMaster-Carr. These are made out of really thick heat shrink material (whatever that is…magical stuff) with an added heat-shrink strip wrapped helically inside. Thus when heated, the cap wants to shrink in both length and diameter. 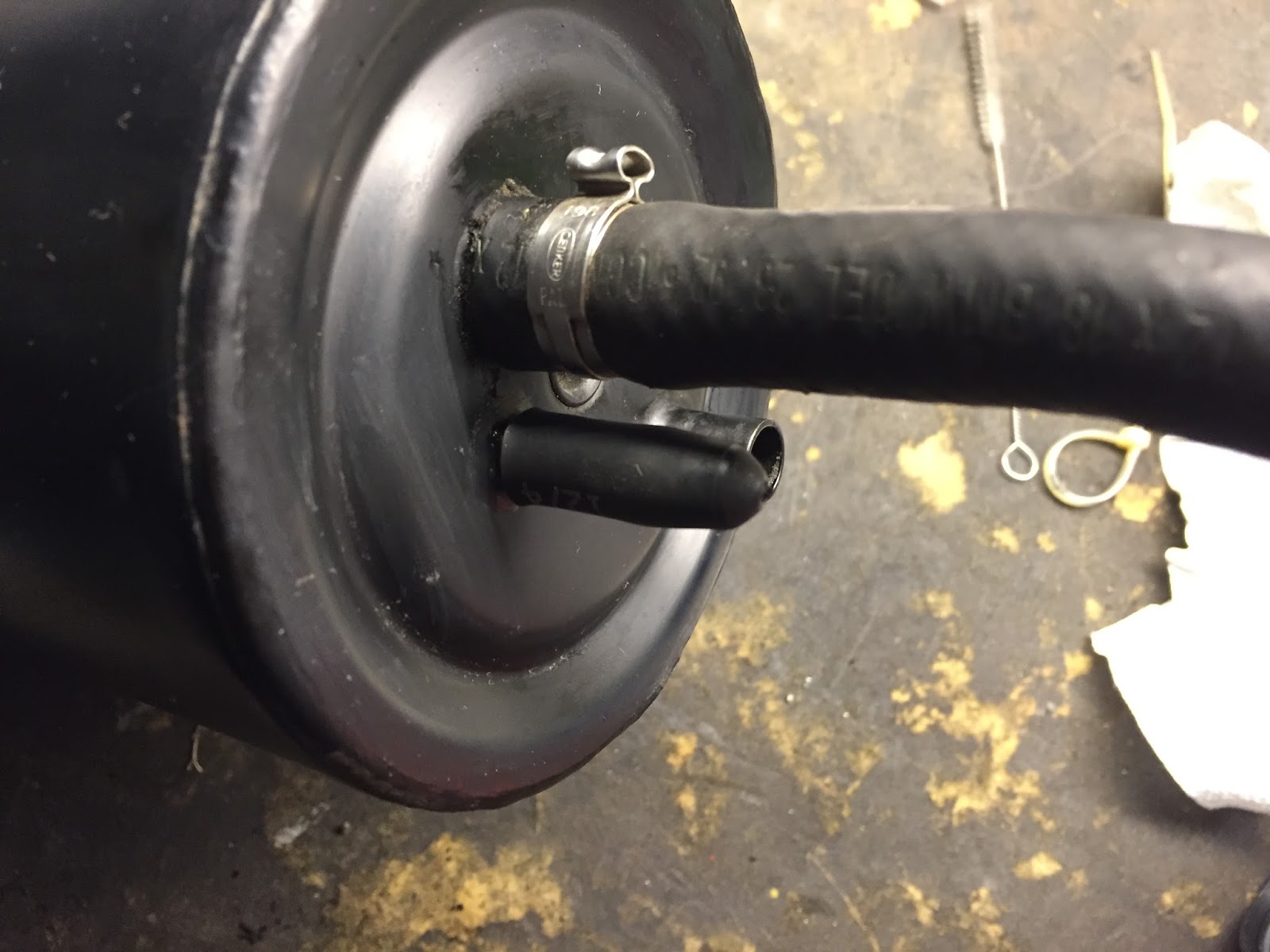 This worked perfectly to seal up my unused hose feed port, and seemed like it would be OK without even requiring a clamp. I played it safe though and tightened a small hose clamp around the base after it dried. So far, no leaky. 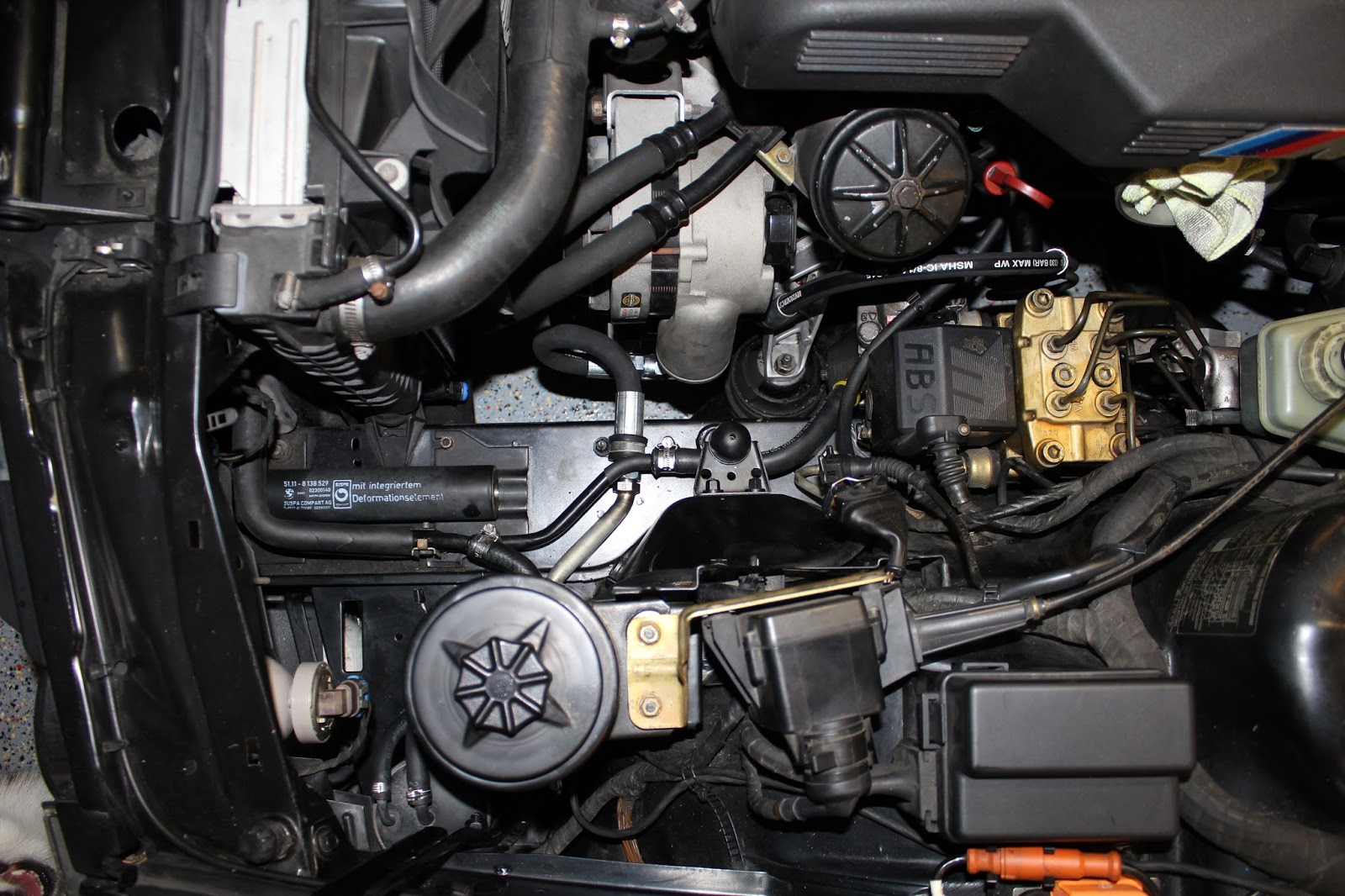 That about sums it up – the power steering system went back together nicely, with a bit of added resistance from the new stiff hoses – but hey, I saved a boatload of cash vs. buying NLA OE parts, and that’s what it’s all about. These new hoses will last just as long or longer, and are more easily serviced and replaced, to boot. 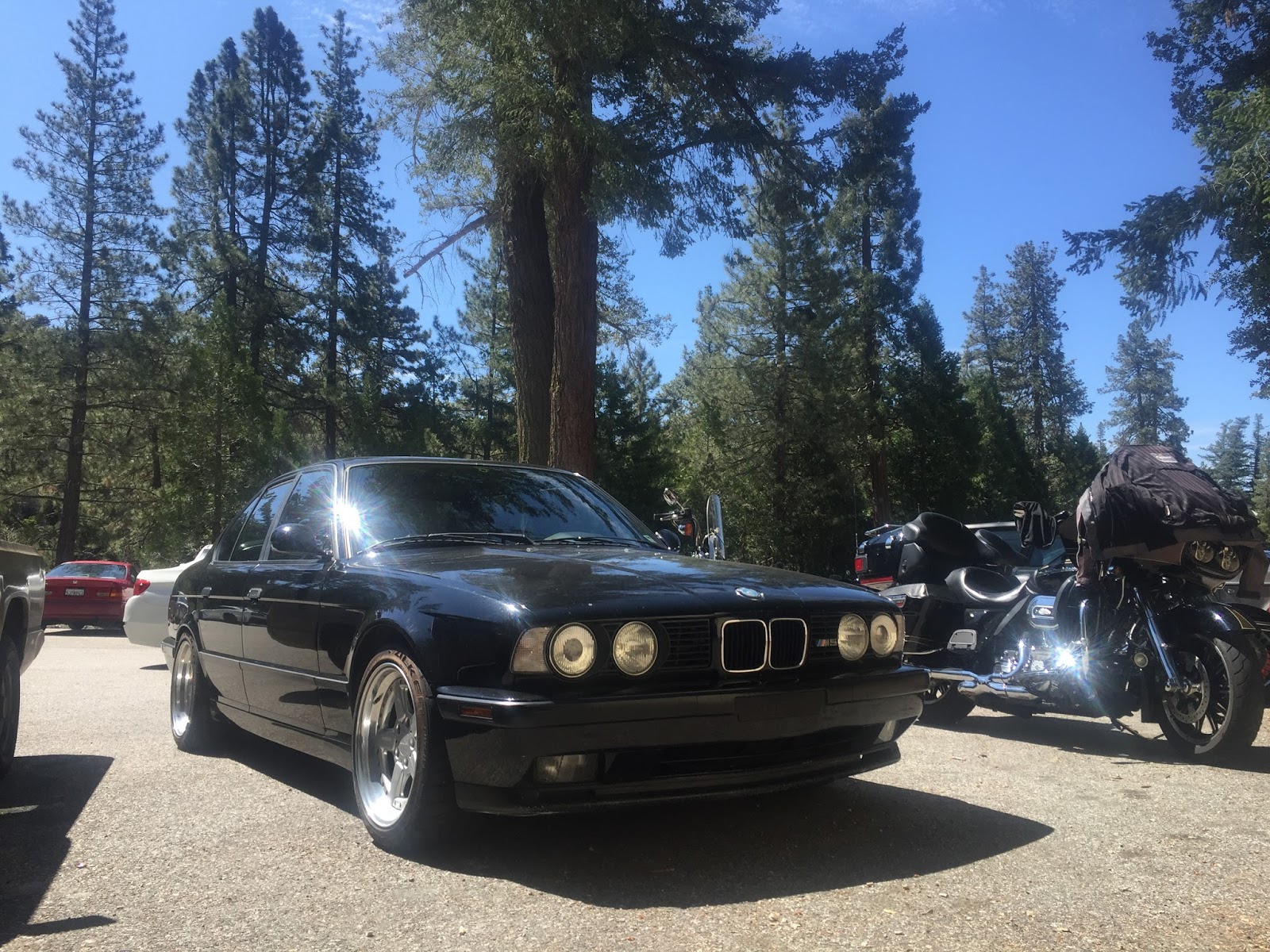 Since repairing the power steering system and deleting SLS completely, I’ve been enjoying the heck out of the M5…the occasional canyon run up to the Angeles Crest area is always fun. I brought the family along for the tail end of the inaugural LeMons Rally last August, running this beast along with Humber Super Snipes, Edsels, and various diesel crapcans that were more in the spirit of LeMons, but hey, I had air conditioning. After the rally and Concours d’LeMons car show, we hung around Monterey for the good part of Car Week, namely the Rolex Monterey Reunion. I’ll always think of it as the Historics at Laguna Seca, but regardless of the name it’s always refreshing to see multi-million dollar machinery being flogged around one of the best tracks in the country. Since that trip, the M5 has been shockingly reliable, so I’m going to descend into the downward spiral of cosmetic fixes next. Stay tuned… 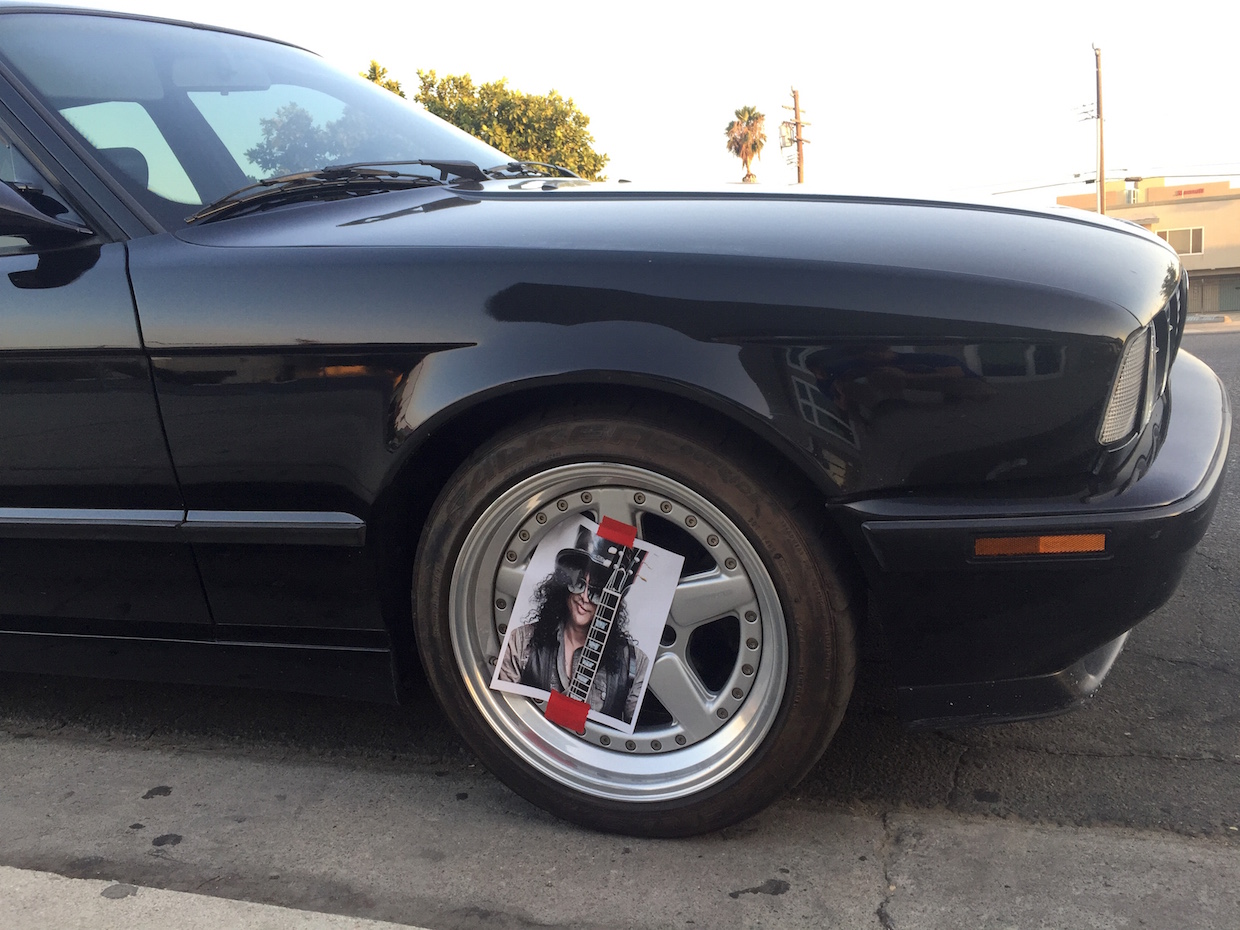 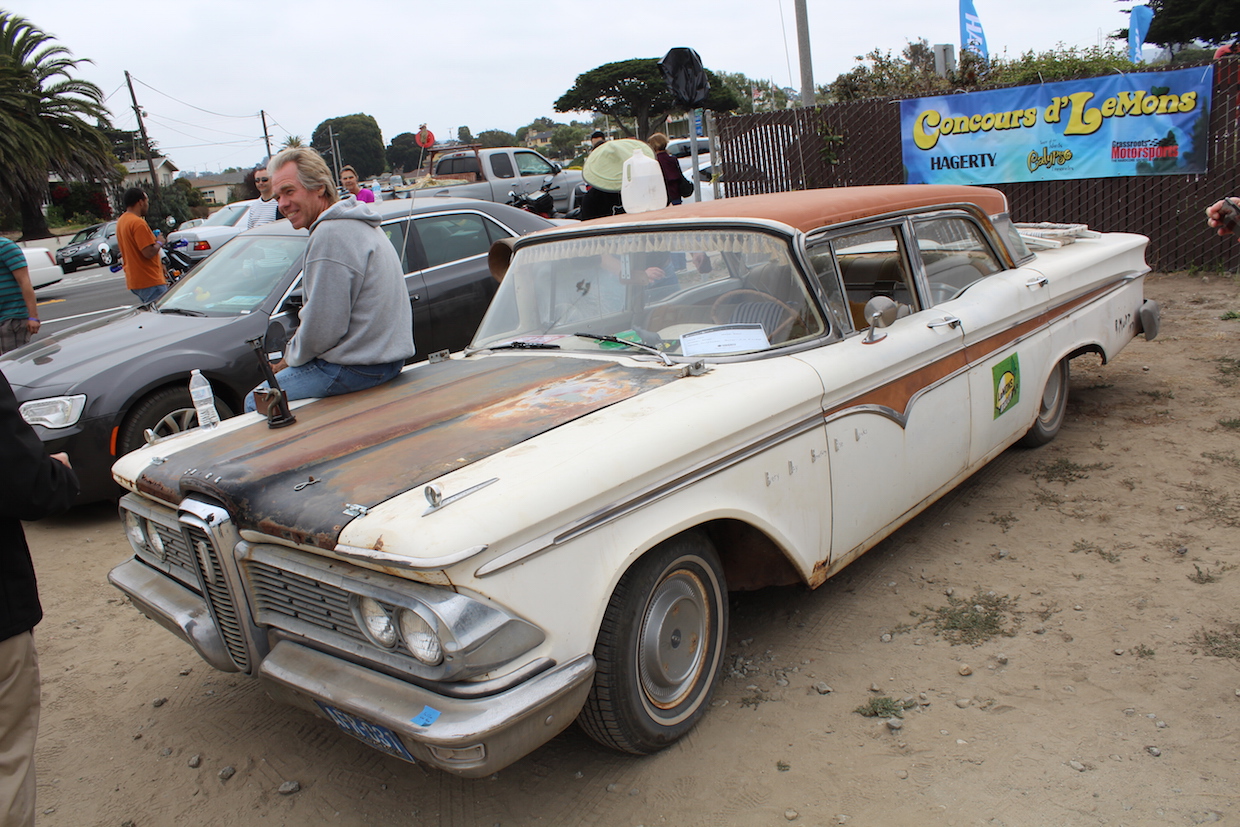 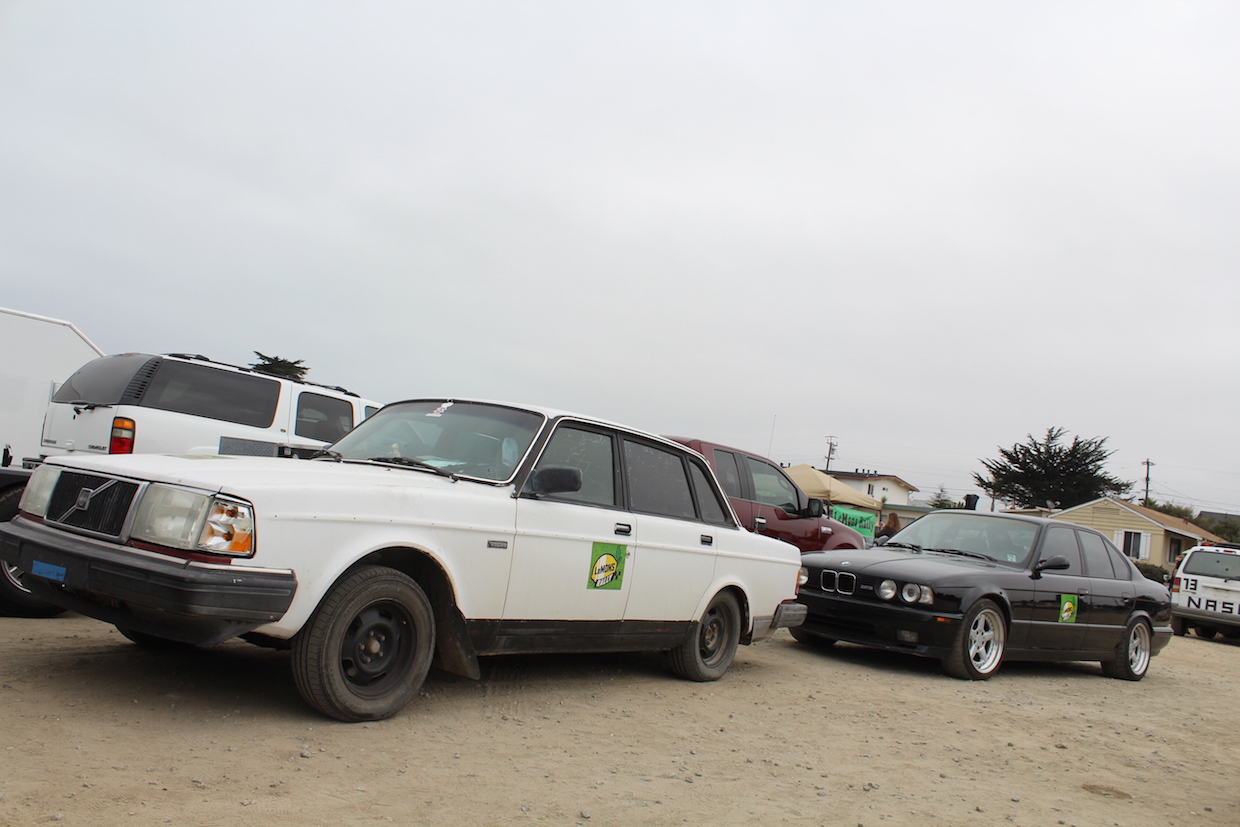 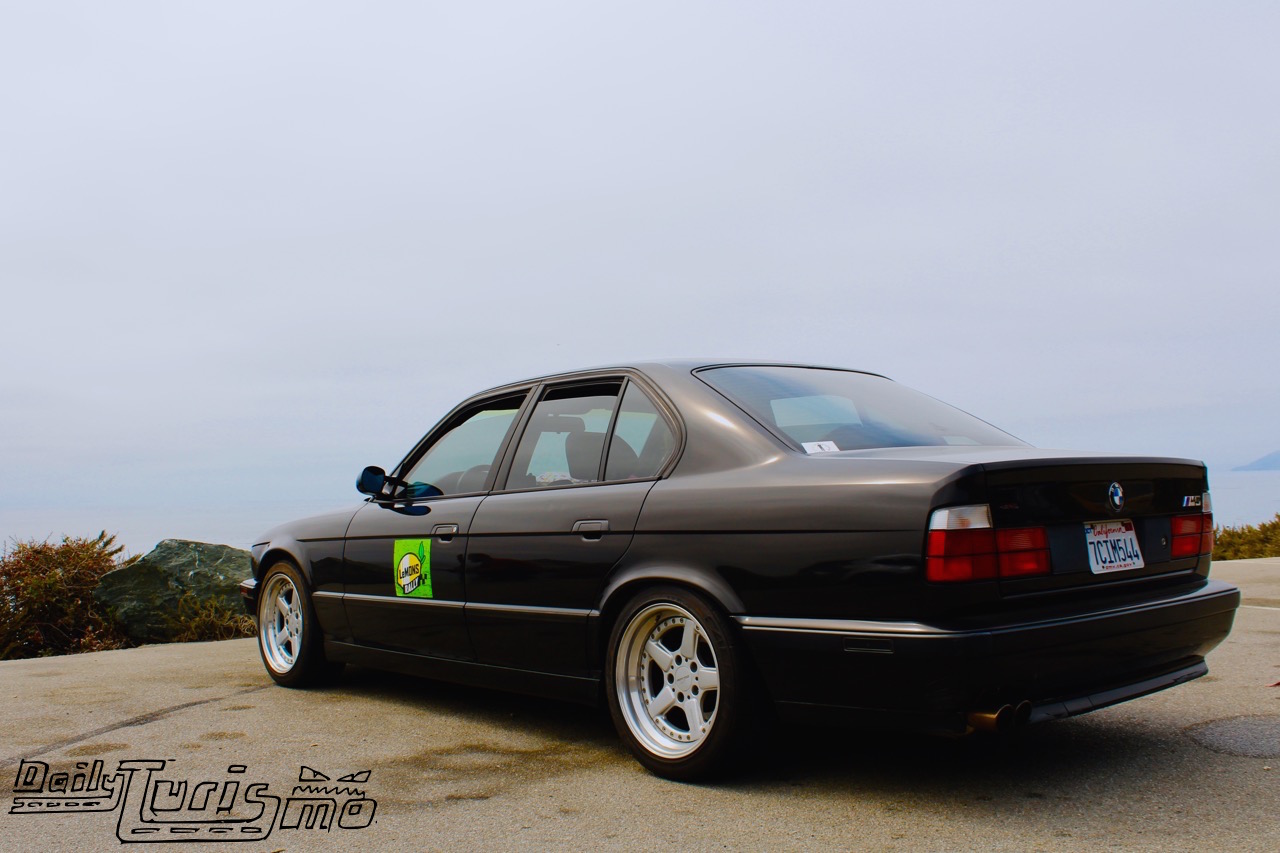 …and all the other DT Project Cars here!

CFlo is Daily Turismo’s Technical Editor and co-founder. When he’s not trying to keep V8 swapped monsters and finicky S38s alive, he’s stockpiling Volvos for the afterlife, and the great folkrace in the sky.