DT’s resident wagon expert, Buick-nut, paint-snob and grandpa (while technically not a grandpa as far as he is aware, his hair has been fully gray for decades) Hunsbloger started a long dialogue about SportsWagons, Vista Cruisers and the general state of 60’s wagons today.  It was too good of a conversation to just send to our trash-bin, so we’ve saved it and posted it up here (-Ed’s note)

I am a HUGE fan of these Vista Roof cruisers and
EBAY is flush with them today!  In addition to the one above, there are
two others joining in to represent the full spectrum of the first
generation of Sportwagon/Vista Cruisers.  They also represent,  three
different situations which present challenges when trying to figure out
which car is the right one for you on Ebay.

Some quick comments about the Burgundy/White ’64 Sportwagon posted on DT yesterday because it is currently stuck at a very conspicuous bid of $6,100.05. I say conspicuous because there’s another Red ’65 Sportwagon which is making its second appearance on Ebay (after failing to capture the right bid a few weeks back) which is currently offered with a selling price of just a nickle less at $6,100.00 (and no takers).  Please note I said conspicuous, not suspicious. This red ’65 is a tweener.  Its neither a survivor, nor a restoration, just a decent change of color repaint, with good equipment. Typical of many Buicks of the period, it offers A/C, power windows and power tailgate window. With the up-model 355 ft/lbs of torque (250 HP) version of the trusty 300 CID V8, it isn’t going to be great in the 1/4 mile but it will move very easily down the highway at ticket-able speeds.

There’s no denying that this ’64 has an awesome power plant,
but what happened to the interior?

Did
the builder run out of money or interest?

No matter what happened to the builder, his purchaser is going to have to have two things:

1.
An appreciation for everything that has been
done so far (including wheels and cheesy dash)

2.
A sufficient wallet and vision to tackle what
remains to be finished.

Until that perfect buyer is found for this restomod, the seller will have a hard time getting his money back.
Trust me when I say this, I would love to own that 455 and the front brakes, but I just can’t get past the items already mentioned.

The glaring problem is that big fat
0   Feedback for the seller.

Would you gamble sending funds to FL for a car you haven’t driven from a seller who has no verifiable track record??

Which brings us to the save-the-best for last:  Here’s a beautiful ’65 Olds Vista Cruiser that I’ve been watching for days.  I haven’t written it up sooner because I don’t think it will sell (through this auction). 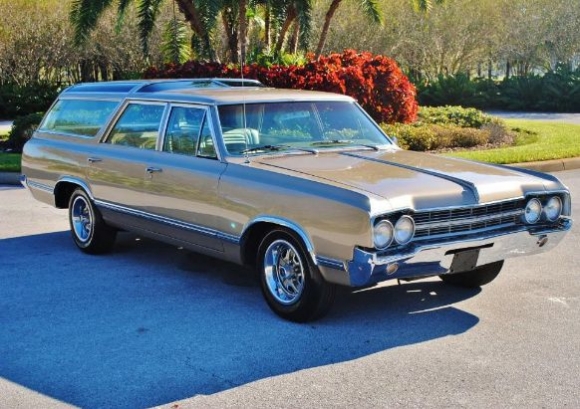 This car will bring in several bids because of its great ORIGINAL appearance (save the wheels).  It has the right options and the right color, causing it to sail through the filters of just about anyone who is seriously shopping for this type of wagon.  So, why don’t I think it will sell through this auction?

Call me a jaded old cynic, but  there are times when I find cars I really like on Ebay, when my investigations lead me to the conclusion that they just won’t sell.  I start by trying to find the car listed through some other source, usually the seller’s website. In this case, I found the seller’s website offering the car at the stratospherically optimistic price of $18,700.  Its so optimistic, I need an optometrist to believe what I’m seeing.


Personally, I think the bidding for this car will stall at about $12,700.


So what’s my problem?

My personal experience has been that when I see a really nice car, stall at a decent/fair/rational price, it usually disappears a day or two before the auction closes.  (There is normally a note to all buyers advising them that the car  is available locally and can be sold at any moment.  So, fair’s fair.  But…I have also noticed that cars frequently remain on the dealer’s site, or they reappear with a sob story about a non-performing bidder.)

I’m pointing this out only for the purpose of illustrating why it is so important to find all the components of a deal on ebay before parting with your cash.

The easiest way to trade is to find
a dealer with a presence; like Seattle Classic Cars.com, whose owner Sean Bryan has successfully
sold more than 700 cars on Ebay.  The amazing part about Sean/Seattle Classic Cars is (and read this part closely) he has a perfect 100% positive
feedback score.  His Ebay Username is (go figure) seattleclassiccars… Ebay doesn’t allow links to that portion of their website, so you’ll have to go in and check out his feedback on your own.   Trust me it’s
glowing! Look at the cars and the comments.  I was not a believer until I bought a car from him too. He sells enough cars that you can look at the feedback, check out the ‘view item’ and see what people have bought from him.

This is not meant as an ad exclusively for Sean, but to provide an example that you can buy cars on Ebay with very little risk.  All it requires is that YOU have a clear idea in your mind of what YOU want and what YOU will accept.  In Sean’s case he specializes in reasonably priced cars, which is afterall the raison d’etre for DT, ferreting out the real deals.  While Sean does have some occasional show-stoppers, the majority of his cars are those that look decent,
drive decent and are most importantly;  affordable.  When you can get that combination of  a trustworthy dealer who can offer
you the opportunity to buy a car, which you can then tweak the way you want;
before someone else has mucked it up… You’ve hit paydirt!!  This might be the appropriate spot for DT readers to add comments about Ebay transactions that have gone particularly well, or that have failed for one reason or another.

In short,we at DT are looking for the raw material when we shop for cars. Once we find it, THEN we can decide whether to drive it, restore it, restomod it, or just drive it like we stole it!

In the name of full discloure, these Vista Roof cars and the part about Sean have personal relevance for me…. he sold me my 1965 Buick Sportwagon with factory
A/C, electric seats, electric windows, power tailgate window, roof rack, fresh
interior, new exhaust and brakes. 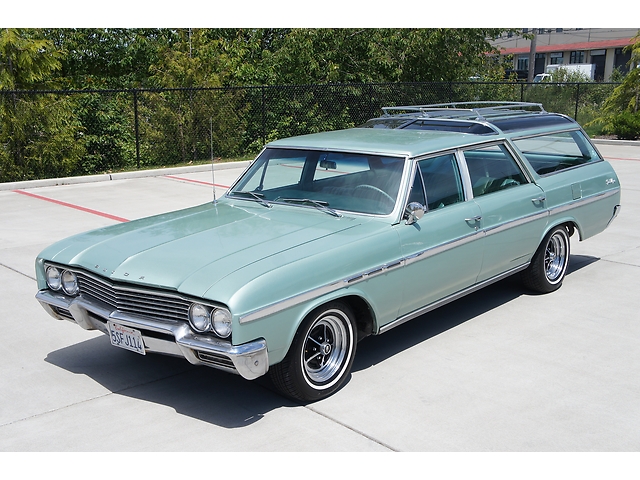 Its only non-stock upgrade …14” Buick road wheels
that are hiding its pedestrian-unfriendly drum-brakes, but will soon hide some front discs.!

There are other dealers on ebay that are credible, feel free to post those you’ve come to know so that others might find their way to them.  I personally know a couple of car dealers who are trying to change the impression of “USED CAR SALESMAN” one honest trade after another, and another, and another.

Have some more thoughts on Buicks or want us to never post crap like this again? email us here:  mail@dailyturismo.com or post in the comments below.