Coffee Brake: DT Logo On A Racecar Heading To the Nürburgring

In case you haven’t noticed, we like things cheap here at Daily Turismo.  Sponsoring a big budget race car like we’re Target, Tide or Home Depot isn’t exactly in the cards.  However, getting a small sticker on a car headed to the 24 Hours of Nürburgring for less than the price of a steak dinner, that sounds like something we could do.  A team called Rotek Racing is trying to get to the Nürburgring 24 Hours race in their Audi TTRS by offering cheap sponsorship options via an indiegogo campaign that is a few thousand dollars short of their goal with 2 days to go. 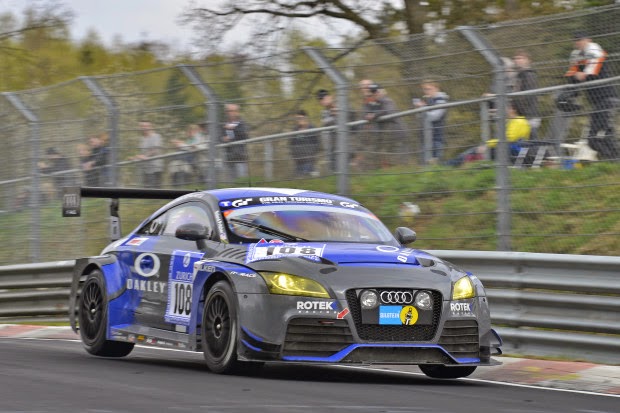 I first heard about this opportunity on an oppositelock post, but the idea of getting a small DailyTurismo logo on a race car at the ring for $100 was just too good an opportunity to pass.  Rotek Racing won the 25 Hrs of Thunderhill race late last year with their Audi TTRS and now they want to head to Europe for a race and need cash to do it.

Basic pricing breaks down as follows:

$10 – Personal Branding: Every supporter will get their name on the roof or wing of the car.

$25
– Personal Motto: Every supporter at this level will get a personal
statement on the roof or wing of the car (Limit 10 words). Also,
supporters will receive a Rotek Racing / Nurburgring sticker.

$50 – Rotek Swag: Supporters will get a stylish Rotek Racing “Race The Ring” T-shirt.

$100 – Corporate Logo Small: Any corporation supporters at this level will get their logo on the wing or roof our TTRS. (Ed note; this is the one DT picked)

$2,500 – Corporate Sponsor (Full): Corporate supporters at this level will get large logo placement prominently on our TTRS.

$5,000
– Nurburgring Experience: Supporters at this level will receive a
passenger side in our awesome TTRS Racecar. 3 laps around the
Nordschleife; We could do more, but you most likely can’t! (And my crew
doesn’t want to clean up your lunch out of the footwell of the car) A track day in the Rotek Racing Ford Focus RS with Pro Driver Robb Holland instructing while you learn the Nurburgring.

Accommodations and food for 2 nights at the Rotek Racing Team house. (Transportation to the Nurburgring not included)

This isn’t a big bucks sponsorship, but a simple classic DT fashion…which means…CHEAP!! See another way to cheaply sponsor a race car? tips@dailyturismo.com